I just had to send a post out post FOMC – plus I had time on the plane from Lisbon this morning. And after Powell’s press conference Wednesday, and market’s reaction, I had time to ponder: Is our seasonal Santa rally really dead on arrival?

I have some good reasons to be bullish into year end – so I will summarize these below – but none of them matter if the market wants to continue to sell off.

Since January, I have been an Intermediate Bear. I have referred back to this Major Outlier I spied on the following chart which prompted in part my market timing call to short. I made that call against a backdrop of 1999-like market sentiment, valuations extended, geopolitical risks, and macro-economic data that caused me to doubt the Trump Bump would continue. But truth is, these were all rationalizations. The bearish narrative simply supported this one chart that signified a MAJOR OUTLIER was in the process of reverting. And it did. 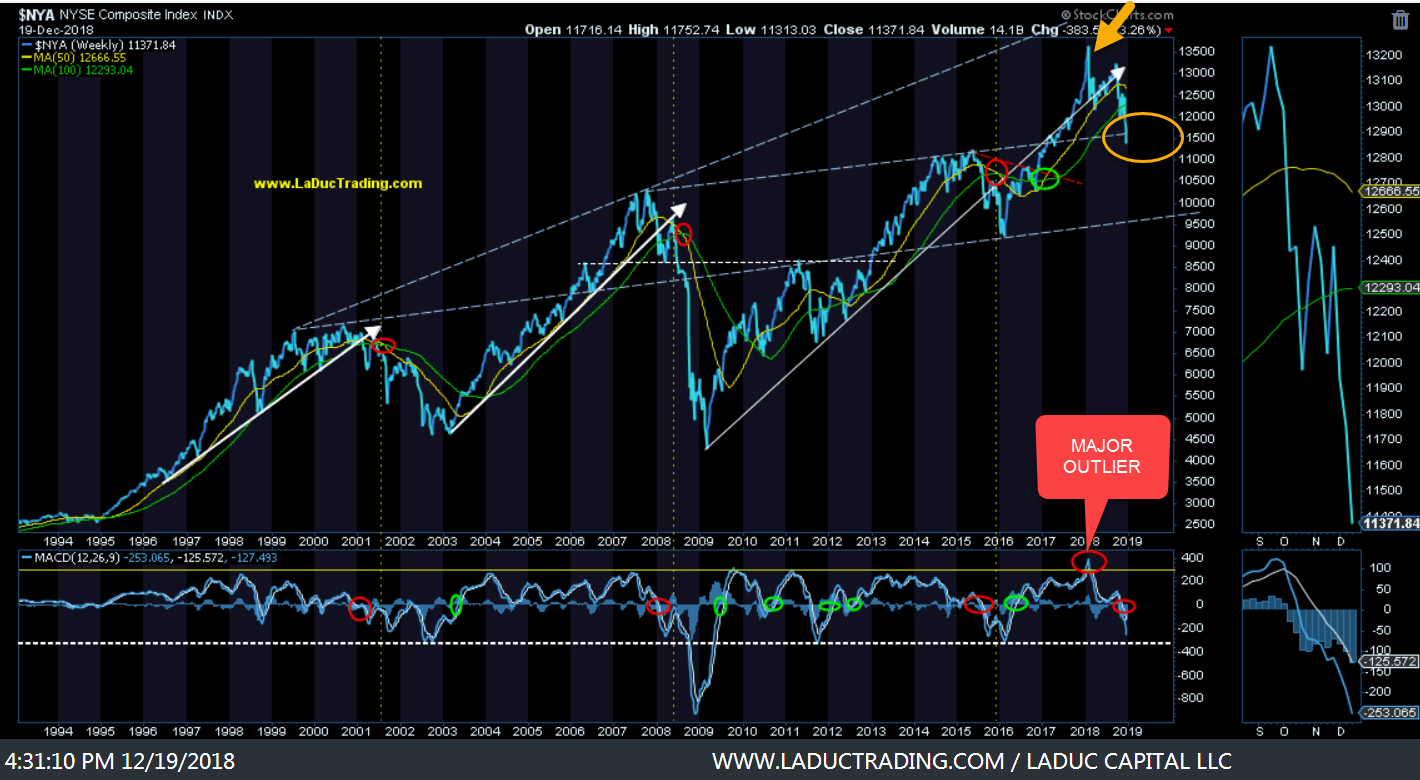 In this January downdraft – in that one traumatic week – I doubled my account. I was highly convicted and right and profitable, but it didn’t last long (and neither did my 100% gains thanks to theta decay from volatile options and outstaying my welcome). In this last market timing call to short on October 3rd, I was less ‘loaded’ short and kept expecting the bullish whipsaw would come, not a slow grind lower and lower and lower. Geeze, the saying, “If this market doesn’t shake you out it will wear you out” applies double for me – despite calling both tops!

Point of this post is not to lament my poor trading execution or strong analysis but to let you know I have not seen a confirmed trend-reversal bottom yet in this chart – a great visual representation of how extreme market sentiment and prices have punished both bulls and bears. And no, there is nothing in the economic, trade war, earnings, or Fed announcements that have caused me to rationalize a bottom either.

But I do see potential for a strong, oversold bounce post FOMC, even though the market sold the Fed announcement strongly yesterday. Clearly, the market fears not only continued rate hikes in 2019 (despite dropping one hike from forecast given muted inflation and slowing growth), but market also fears il-liquidity that comes from the Fed refusing to slow their QT efforts which takes $50B in money supply out of the markets each month.  This last point seemed to be the more disruptive statement by Powell, bar none.

But look at it from their eyes: employment is ultra low, as are interest rates of ~2%, and despite slowing global growth (due in large part I contend to a rising USD), and low inflation of ~2%, well anyone looking at all of our inflated asset classes (that are due to cheap and leveraged money) would say that it makes sense for rates to rise. But if you are a money manager – of someone else’s money or your own – you see a US stock market correcting, a rising US dollar, a US yield curve close to inverting, US debt market drying up, and a bear market in global stocks. And that may be why some are quick to complain that Powell’s insistence to raise rates and continue tightening to balance their balance sheet seems wrong-headed and dangerous.

And this structural monetary policy shift, combined with sentiment dead-set against it, likely sets us up for more downside in the New Year. How much? I’ve written about this already and my thesis is basically that Q1 seems a logical place for a Flash Crash.

A Dangerous Place To Buy

Nomura cautioned clients in October to go to 100% cash if SPX triggered 2577. My level to get and stay above is $2571 SPX and ZIV $61. We took out $2500 Wednesday while bond yields fell sharply and bonds broke out above long-term trend line. 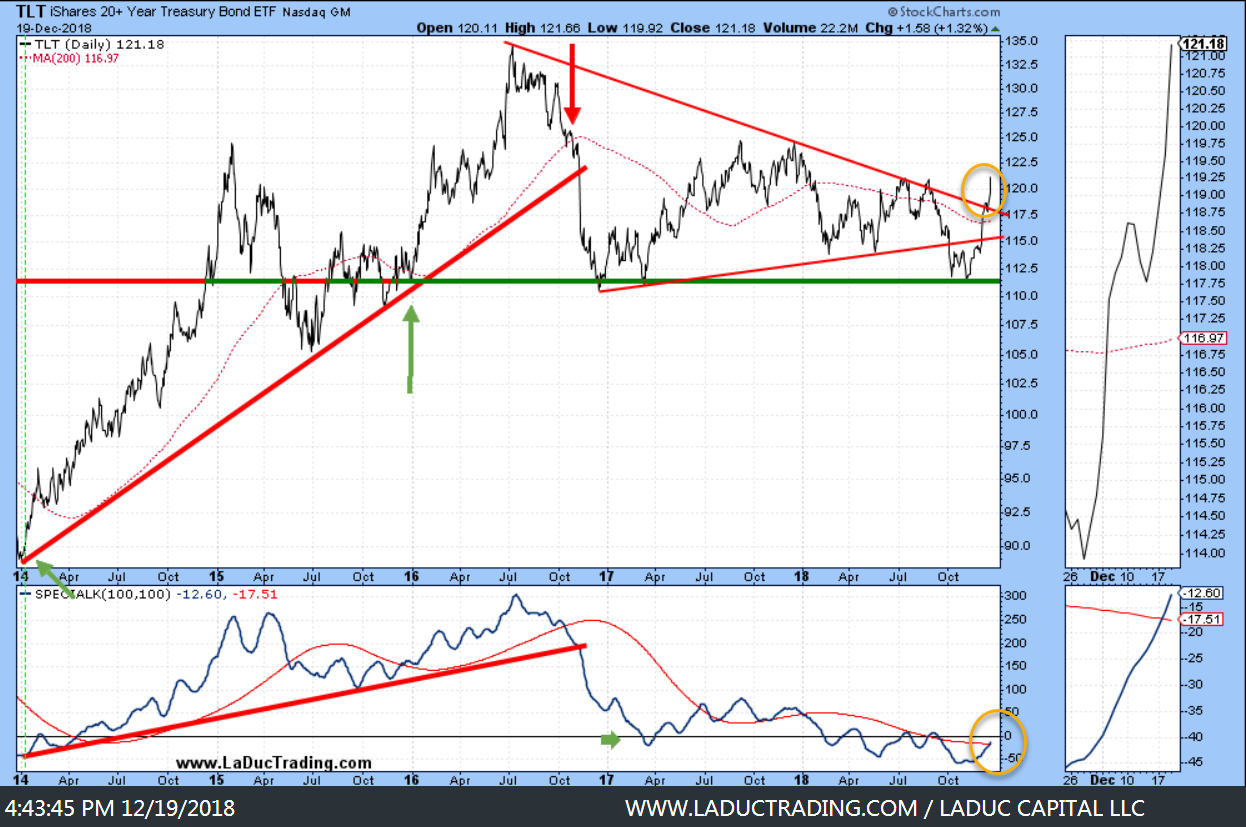 I think the market overreacted – to the downside – as did bond yields. First, bond yields fell sharply even though Powell said he intended to continue with QT on autopilot, but this should mean a higher supply of bonds which should equal lower prices and higher yields. In short, I think TLT will make for a good short soon (or TBT long) especially into a February government shutdown and continued poor showings at upcoming Treasury auctions.

Bonds caught a strong bid into and through the Fed announcement as equities sold off from his QT comments. Again, I think the market is front-running future liquidity concerns. And these are justifiable concerns! The urge to get out of stocks was clear. But this could turn just as quickly as institutions realize bonds face a supply surge from both the Fed and the Treasury.

Powell seemed to have either misjudged the market reaction or just didn’t care. But the level of anxiety in markets about continued QT (not dovish) and the effect of liquidity concerns in the market is what turned the market against Powell most strongly it appeared.

Market also misjudged Powell. His message was clear: they had no intention of deviating from either a Rate hiking or QT path. Period, end of point. The Market doesn’t like that message even though the same market complains constantly from the effects of easy, levered money the Fed made possible and is now trying to reverse. The underlying message of the stock market is irrational – to both blame the Fed for causing AND bursting the stock market bubble.

Right or wrong, the Fed gets blamed and the downturn in stocks picked up speed.

Financials are on pace for their worst year since 2011 and this is weighing heavily on market Bulls. The yield curve offers no relief for them either as they traditionally source profits from the gap between low short-term rates and higher long-term rates, but as this gap narrows tightly, so too does hope of banks catching a bid.

The Market also distrusts a flat curve as is represents fear the Fed is making a (hawkish) policy mistake, that rates will rise in the short run, and that slowing economic growth isn’t fully priced into the market.

And all of these logical reasons are coinciding with a still-overvalued market that has many Santa Claus rally folks on the wrong side. Including me in small part as I decided to add some starter longs (Jan expiry) just before the FOMC in case Powell pandered and market exploded. It has happened before (1998 when Greenspan suddenly lowered rates sending stocks on a tear, especially financials). I wanted a piece – just in case – especially as my prior post projects a violent rally in the coming month before a sharp downdraft into $2300 area later in Q1.

Well, Powell didn’t pander and markets exploded to the downside. That’s trading! I contend I still have time, and I still see bullish technicals that support my thesis for higher and soon.

There Is Hope, Sort Of

Powell also noted that once “neutral” is hit, any hikes become very conditional on strong inflation. So now the market will have a new focus to obsess over. And all eyes will be on  every upcoming reported inflation print for the foreseeable future in hopes the Fed slows their Rate hiking and QT path. And each bounce will likely be shorted as Powell strongly defended the Fed’s independence from politics or market gyrations.

Since my October 3rd Rate Spike market short call, and Powell’s more than confusing “well below neutral” statement, both rates and Powell have completely reverted – 10 year is back to 2.8% and Powell is back to ‘at neutral’.

But the markets have not yet reverted and instead seem to be discounting an imminent recession more than current data supports. And that is why I think we bounce, among other reasons: 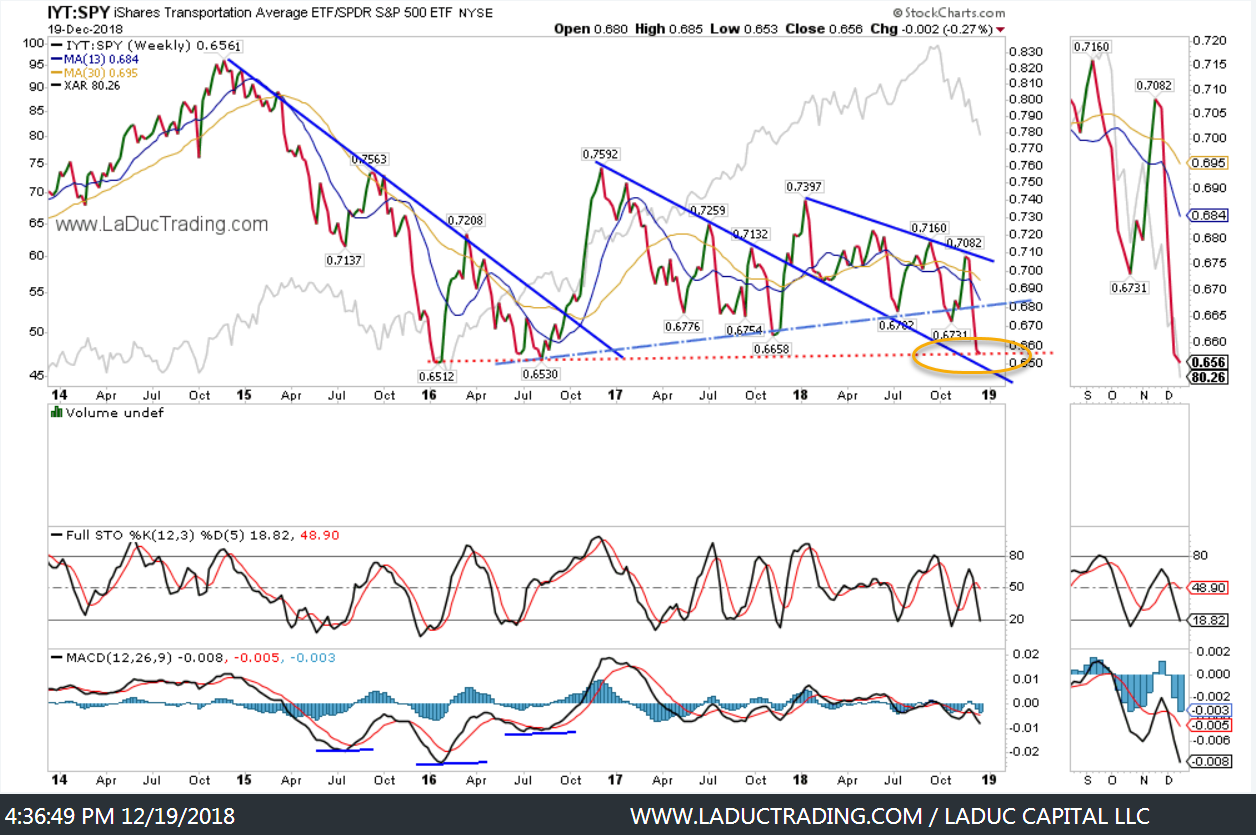 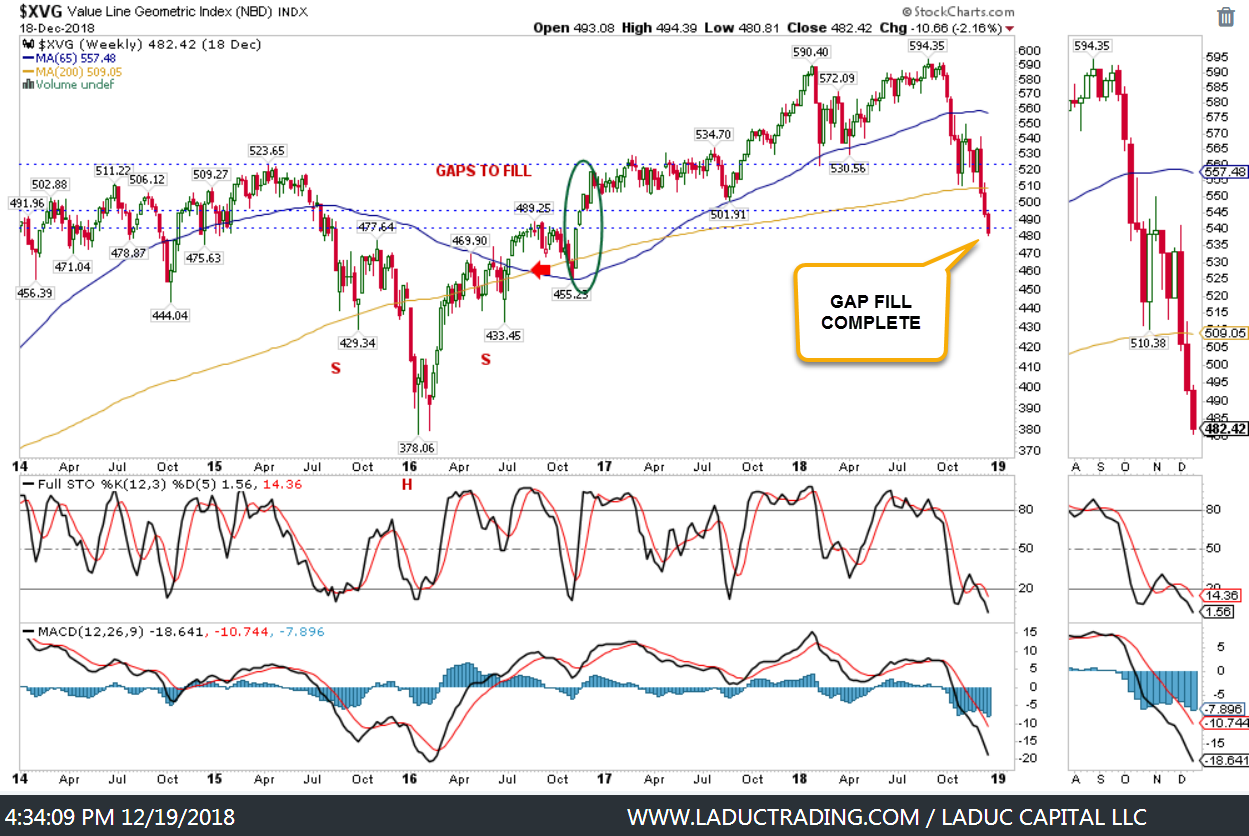 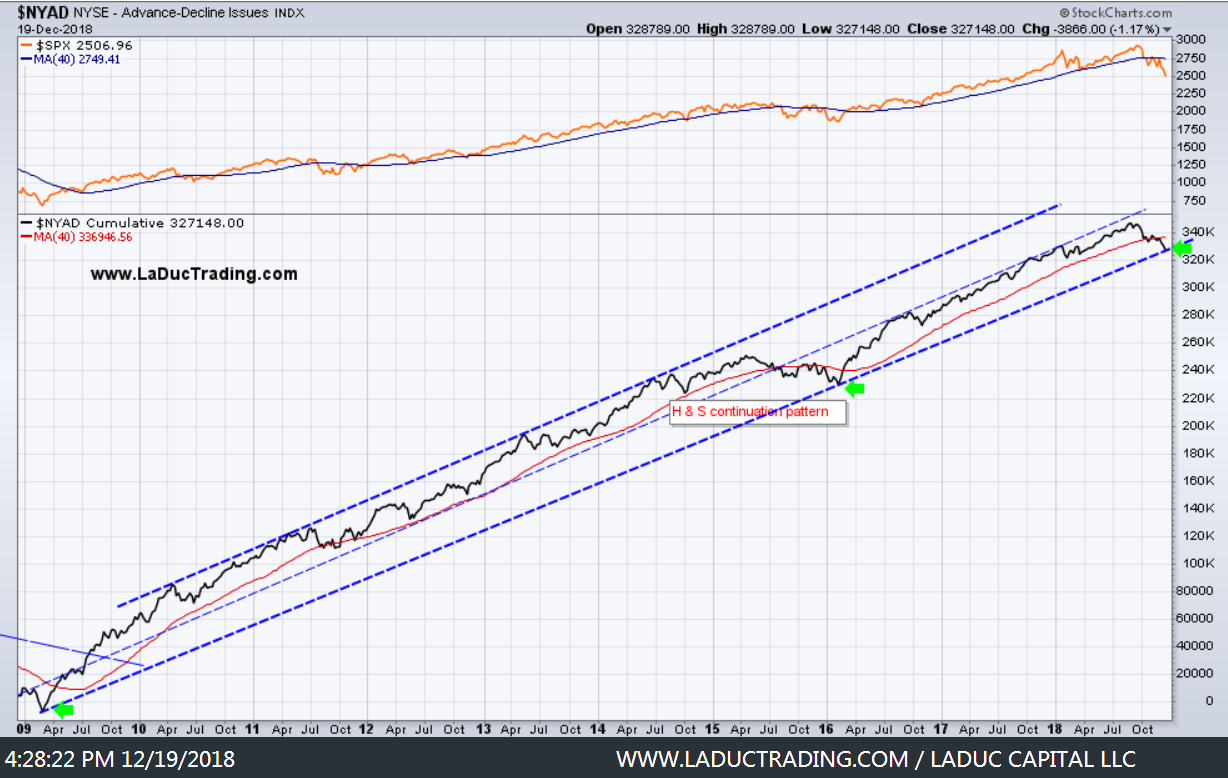 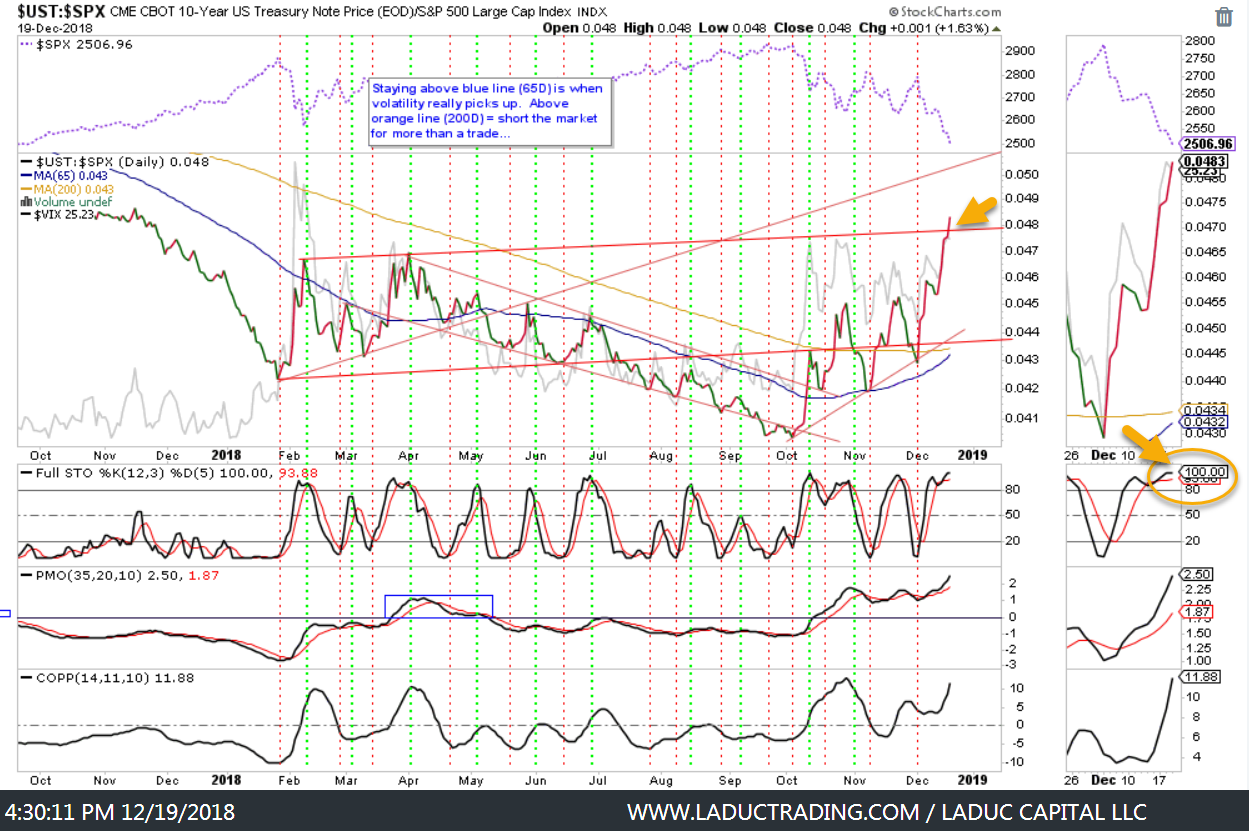 With that, I will not be trading while traveling and spending time with my daughters in Europe, but I did want to get you my market thoughts in case they help. I want to wish each and every one of you a peace and joy-filled holiday and a fabulous and very profitable New Year! Speaking of profits:

And THIS is why we meet every Tuesday at the close for
Macro-to-Micro Power Hour!!

Didn't I say this was a huge PROB yesterday @SamanthaLaDuc?? https://t.co/k9gA0JQbLW