Market Thoughts: US Dollar on Path of Least Resistance

Big deficits and looser monetary policy are negative USD, but as long as Currency-hedged US Treasury Yields remain negative then the USD is not weakened significantly. And that is in part why ECB, BOJ et al keep doing it – keep range-bound USD in good shape for stocks. Higher USD is emerging market contagion and will would cause the global economy much distress, especially in its fragile global state, actually causing a recession not just talking about one.

So even though Trump would be delighted with a Dollar Debasement strategy, and while it may temporarily add fuel for higher U.S. market prices, it can destabilize foreign currencies that are supposed to be ‘controlled’… like the Yen. And a Yen in escape velocity mode is not Bullish equities. And what about the Chinese having this kind of dollar appreciation take place? The collateral damage is a higher Yuan on top of Tariffs? Oh my. The country is already 300% Debt:GDP. The monetary stimulus they are enacting combined with capital flight containment efforts on top of higher borrowing/repayment costs from higher USD would be all together… Wealth Destroying.

So in the case of Central  Banks printing, to avoid inflation (but not too much) and buoy the USD (but not too much), it seems the balancing act of keeping the USD in balance at all costs, is a great cost to pay. 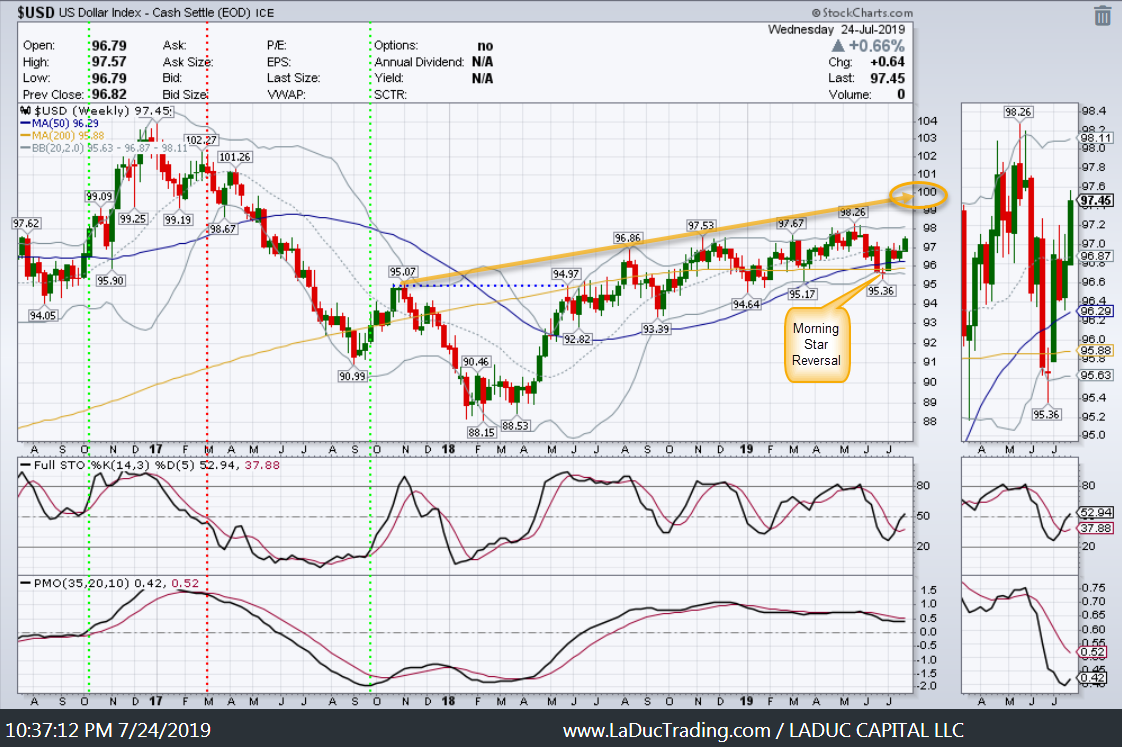 My Gold short thesis hasn’t confirmed yet, but I see signs: TLT looks ready to pull down with Yen and Yuan. Gold usually trades in a correlated fashion with bonds/foreign currencies as USD moves higher. Also, Gold has a tendency to trade down into FOMC, especially if hawkish. It’s not, so maybe Fed really will cut 50 bps.
As for a bond trade, I am expecting TLT/bonds to tag the red trend-line (yellow arrow) at least.

Last night in the StockTwits room I talked about $CAT, the potential daily cup and handle and other positive technicals. 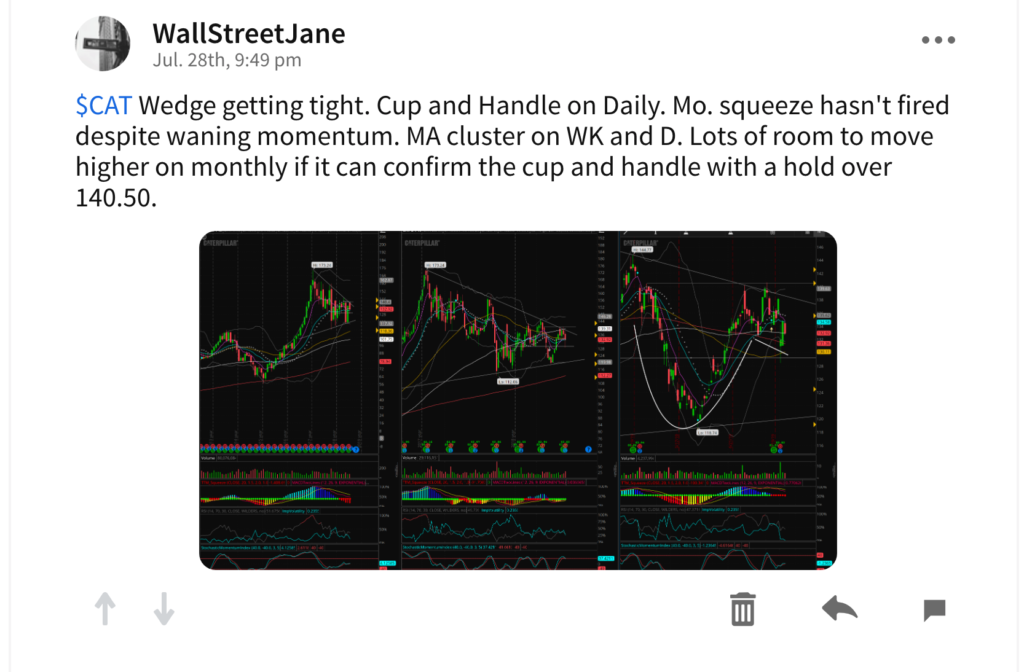 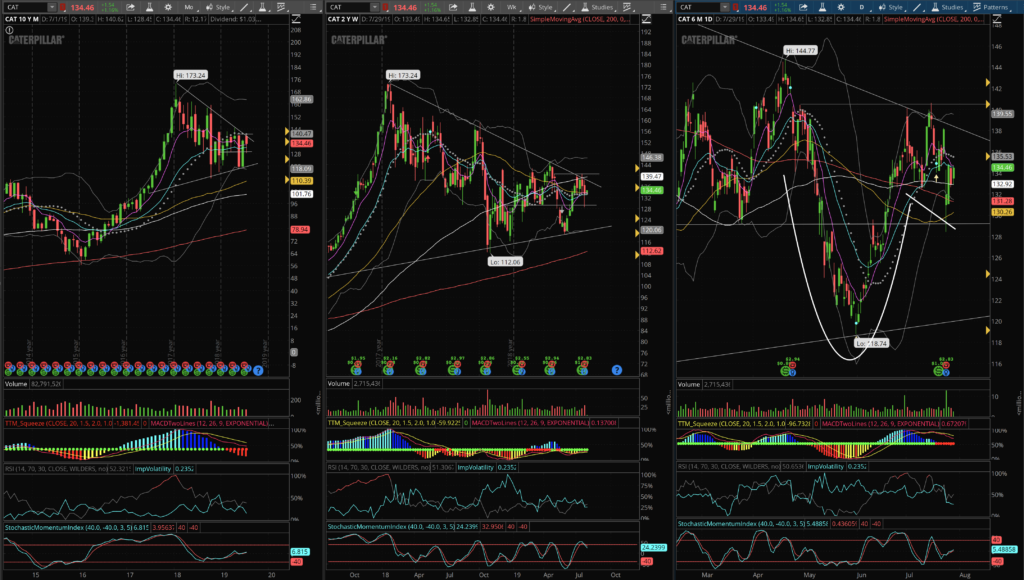 China warned that Hong Kong’s unrest had gone “far beyond” peaceful protest, after a chaotic weekend of tear gas and clashes illustrated the government’s struggle to quell a leaderless, unpredictable and widespread movement.

A growing cloud of economic anxiety is looming over Hawaii, as the ongoing trade war between the world’s two largest economies threatens to cut off a once-steady flow of Chinese tourists. As of June, Chinese visitor arrivals have dropped by about 36% compared with the same period last year, according to figures provided by the Hawaiian Tourism Authority.

In 2018, nearly 10 million travelers from around the world visited the Aloha State’s sun-soaked islands, generating $18 billion and employing more than 200,000 people. About 20% of those visitors traveled from Asia, with Japan, Korea and China providing the lion’s share.

And while Chinese tourists represent less than 2% of Hawaii’s total visitor count, they stay longer and spend more money compared with other Asian travelers. On average, a Chinese tourist stays a little more than eight days and spends approximately $350 a day when vacationing in Hawaii.

How Poland became a front in the cold war between the U.S. and China: There’s always collateral damage.

An alleged spying case involves a Chinese businessman who speaks Polish and worked for Huawei – the Chinese telecom-gear giant in the crosshairs of the Trump administration. In lengthy remarks, the jailed Chinese suspect tells Reuters he’s an innocent casualty of the campaign against Huawei.

There will be No Daily Fishing Lesson for market action/macro-to-micro thoughts for Tuesday July 30th as WallStreetJane is taking a personal vaca day and Samantha has been focused on three Client Research Reports for this week in addition to a RealVision Interview this afternoon – to be broadcast Thursday – not to mention lots of market action ahead of the FOMC tomorrow. Will be back Wednesday night post Fed!