Prepare For Pullback In Gold Then Relaunch – Just Like 2008

Gold Has Skyrocketed Since May. Why?

We have experienced a lot of dis-inflationary headwinds from the synchronized global slowdown and ultra loose monetary policies in the US, Europe and Asia specifically but globally in general. What could change these disinflationary headwinds into inflationary tailwinds as a result of or separate from the geopolitical events like US-China Trade Deal collapse and hard Brexit? The biggest one: the collapse of the US dollar as the global reserve currency. Am I expecting that any time soon? No. Given the whole wide world is awash in debt, we won’t likely see the World’s Reserve Currency of the USD debase until other countries start to liquidate their US Treasury holdings. And given the size of US market buyers – Blackrock et al – that supply would likely be absorbed. At least, we need to hope it will be. If not, there is no safety in stocks or bonds. Everyone will buy Gold and every penny-stock gold mining shop will rise 1000 fold.

With that, any recent USD pullback (it’s been range-bound for months) did not cause the recent violent move higher in Gold. It was just added fuel. Last month (June 6) for DailyFX I was interviewed for their podcast wherein I made my pitch for Gold:

Now, overbought is a relative term, so here’s a picture to demonstrate my position that Gold (and Silver and Miners) are OVERBOUGHT right now and should pull back. Note the times GLD was outside the Monthly Bollinger Bands… And in the 2nd Month, GLD reversed, strongly. 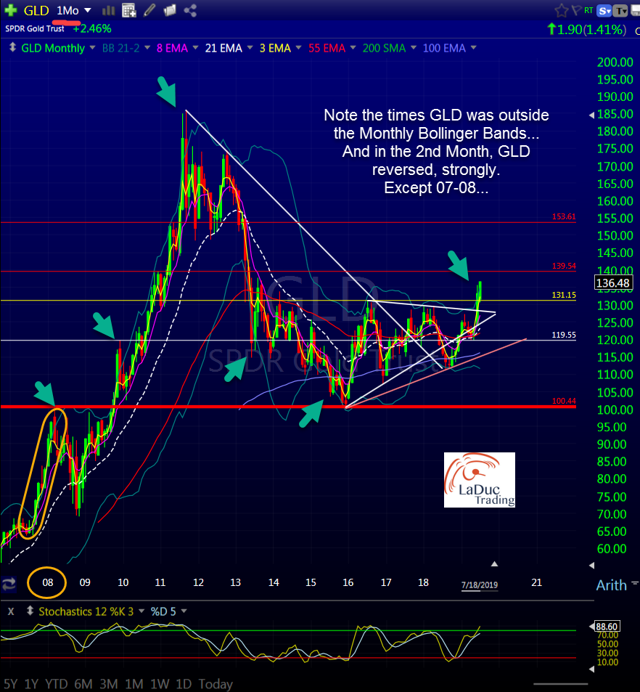 During the last 2 rate cut cycles, it paid to buy Gold and Silver after the first rate cut. See chart wherein the Fed cut nominal rates in late 2007 causing real interest rates (yields on 3-month Treasury bills less CPI inflation) to fall, which caused a strong run in Gold for first half of 2008 before strongly pulling back and then relaunching in 2009 for a multi-year run. I believe Gold is following a similar playbook.

One chart I follow is a relational study of Gold with SPX. The effort Gold needs to move back ‘above the fold’ (resistance shown at .50 level) is formidable. Once it does, resistance becomes support and being Long Gold is a much higher probability bet.

My View as expressed in my Live Trading Rooms before I went short GLD, SLV, GDX for a trade:

Jul. 19th, 7:45 am The very dramatic fall yesterday in the US dollar, on Clarida’s comments of potential QE tools ready to deploy, is being sharply reversed this morning. Williams came out to talk it back and I suspect it will be talked all the way back. With that, gold and silver were also at extremes yesterday (charts in Daily) and I fully expect for them to reverse. SLV below $15.15 is a swing short in my book. GLD may back and fill up here into FOMC week before falling dramatically on a disappointing rate cut.