Market Thoughts: What If There Is A Trade Deal?

It was a dramatic day in that my recent posts to sell Bonds and Gold/Miners happened much faster than I expected, but also in that I potentially discovered a reason – outside of my published analysis – as to why stocks, bonds, gold moved so strongly today.

Quick Review: Yesterday the yield curve turned positive the day after I posted: Market Thoughts: Spying a Bond Pullback. Today we had both good economic data on Market PMI Service and ADP job print. We also had continued trade talk tweets, this time confirmation from China that trade talks are slated to happen for October (conveniently around China’s 90 year Anniversary of the CCP). But stocks exploded much higher than usual, and it’s not unusual to get “trade talks going well” tweets. Definitely not enough to pop yields so violently that the 10-year had its largest 1 day percentage move since the 2016 election. Even gold and silver dropped 2.5% and 5% respectively. Risk trades were clearly sold.

And I must admit, I didn’t expect SPX to push past $2945 so I missed it. I took that large expansion bar on Friday August 23rd and pressed short. Then G7 happened over the weekend. I ignored it in large part. We bounced Monday and the market has moved higher since. No Powell Punt. No Removal of Trump’s Tariffs. No NEWS that would cause the buyers to step in to the market and, well, buy so aggressively.

I looked for a reason both Technical and Macro.  Usually what I find is that the macro forms and later confirms the technical.  I had already posted my market thoughts from last week that I attributed  more buying then selling in equities after a solid month of chopping sideways to Pension Rebalancing and/or end-of-month buying and/or stock buybacks before blackout. I wrote about it in my Monday Market Thoughts: Shaken But Not Stirred. I was in disbelief that we hadn’t/wouldn’t retest the SPX futures gap of ~2775 made on August 5th in the dark (not during market hours). In short, I was off-sides to an extent as I also admitted and as such did not expect the gap higher today in indices – getting SPX to 2% below all-time-highs.

Then a twitter follower I don’t know tagged a tweet I wrote and said something very short and to the point in response to my skepticism:

Market rallied strongly on talk of Trump-Xi meeting. How soon before debunked.

And no other than @LukeGromen ‘liked’ it, a macroeconomics analyst I admire. So now I was curious. Well, actually, I’m always curious. That’s why you read this thing. You want to know what I see and where it might lead. Well, same thing for me with this tweet, so I did a proper search of his timeline and discovered something I had totally missed and had heard no media outlet surmise.

“merkel and macron sided with trump at G7, and agreed to upgrade the trade resolution mechanism becasue WTO has no teeth. In effect, they put China in a box. Trump gave up a global digital tax. Merkle will act as trusted referee by all. China is now on board. A trade deal follows.” @CurrencyWar1

There are many holes in this assertion but I couldn’t help but ponder: Could the G7 meeting really have been the place where Trump formed an alliance with Germany and France to ‘force’ China’s trade compliance over Intellectual Property, and in trade for protecting it, Trump gave the EU a Global Digital Tax?
I have soooo many questions, and even more doubts, BUT if Trump does manage to leverage Merkel and Macron to ‘mediate’ the US-China Trade Deal, then we might actually get an enforceable US-China Trade Deal. And that may also explain the timing with Hong Kong leader Lam seemingly backing down on the extradition bill, with the market response triggering a panic yield bounce and the unquestionably strong surge in stock prices.
It  could also be the bounce I was anticipating in yields based on this chart I posted for clients: 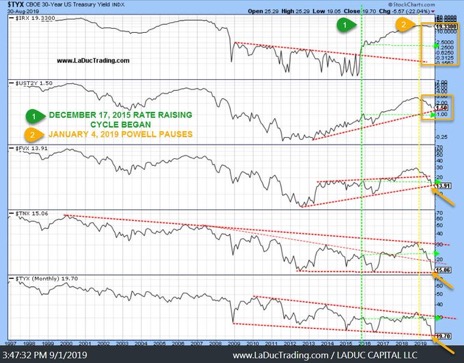 One day does not a break-out or trend-reversal make, but I am careful not to dismiss. And I know there are no guarantees that the Hong Kong extradition bill will actually be removed or that Merkel/Macron can negotiate peace on trade between Trump and Xi, or that the “Internet Tax” is the “sex and cigarette” barter used in this Trade War,  but it could be, and that’s enough reason for this market to pivot on the potential.

Hey, I did get a few things right:

“I think these metals are parabolas with a case of vertigo”

So how did that Bond Short call work out? $TNX $TLT Largest 1d percent change up move in the 10yr since the 2016 election.

So What If There Is A Trade Deal?

Well the cost of doing business for high-tech firms especially in the EU will be going up soon – markets just don’t know it yet. Markets do figure removal of the trade wars is good for the economy and that helps to reverse the fall in yields worldwide.
Funny how I saw signs of the Bond rally exhaustion and posted my thoughts Tuesday: Market Thoughts: Spying a Bond Pullback. And today we had the biggest 1 day move in the 10-year since Brexit in 2016! So, yes, I timed it well and I stand by my technical analysis BUT I can’t help but also want a macro narrative to fit my charts (and vice versa). So curious with the trial balloon floated today from “Powell” that rate cut won’t be 50 bps but 25.
So let’s take this Rate Reversal thesis one step farther. Let’s assume that Fed doesn’t cut by more than 25 bps on the 18th and ECB doesn’t give more than a 10 bps cut next week.
Peter Boockvar makes a solid point:

What a sharp selloff in global bonds, if it occurs, would do for the rest of the world’s stock markets I really don’t know but the potential money lost in fixed income, if I’m right, could be substantial in light of what is the biggest bubble the world has ever seen….
if there is something that would pop this it is the world’s central banks saying we can’t go anymore negative

And with that – potential for a US-China Trade Deal, potential Central Bank stimulus slowing, and potential expectation for reversal in economic weakness and earnings decline – markets could easily rally on relief. Some point to a “melt-up” to mimic 1995 when Fed cuts juiced stocks by 36% – and we are just half-way there in S&P for 2019 so far.

More likely, the damage to fixed income from the popping of the Global Carry Trade Great Unwind along with Trump and Powell disappointing in some or various fashions, cause markets to fall from fatigue once they realize that structurally, the economy is different now than it was before Trump’s Trade War, Exploding Deficits/Debt, Negative Interest Rates, USD Funding obligations and Trump’s Manufacturing Recession.