Market range for the week that ended was incredibly tight: we opened Monday and closed Friday within 1 point in SPX. I even joked in my live trading room that the intraday hourly squeezes (bollinger band contractions) on some stocks were “wrinkled” under the weight from the tight compression – which only foretells to me a big movement coming up. In the meantime, it is like breathing in fumes. And I just don’t mean the distaste of trying to navigate the chop, stuck wasting time watching for a move and having very little to show for it. I also mean the air up here – the 2% from ATH. Air feels thin and not sweet to me. I miss January when on the 4th Powell made his famous Pivot that they were ending rate hikes and going to “neutral”. I said in my live trading room that it didn’t matter what you buy, 9 out of 10 stocks would go up. Yes, that was hyperbole, but it was also right. Now, the air feels downright smelly as the world waits for Powell this coming Wednesday June 19th to deliver markets with relief from economic slowdown and accelerated trade wars and tariffs by giving us their rate CUT schedule.

I don’t think it will be the panacea markets want. I’ll talk more about that in my Weak Ahead post Monday and my Intermarket Chart Attack post (Newsletter Clients Only).

Next week we actually have three central bank meetings on the agenda: the Fed, the Bank of Japan and the Bank of England. Bank stress tests are also do up, although the losers aren’t announced anymore. I mean, why even bother taking the test?

Here’s the only stock that really counted Friday:

Broadcom (AVGO) CEO Hock Tan on Huawei impact on guidance and inventory issues in general … Well, it’s an interesting way to figure that out because in terms of full disclosure, Huawei represented last year about $900 million of revenues for this company by itself. But the other part of the picture I should add is that guide down that we’re providing, as you put it, of $2 billion obviously extends beyond just one particular customer. We’re talking about uncertainty in our marketplace, uncertainty because of the — of demand in the form of order reduction as the supply chain out there constricts — compressed, so to speak. And because we do see, to some extent, end users in the U.S., particularly North America and Europe, continuing to be there. But what we do see in between is the uncertainty of the environment has put in place a concern about placing additional orders and actively a reduction of inventory out there. Basically, compression of supply chain is what’s driving this reduction more than anything else and it’s broad based. This reduction is very much the action of the supply chain of the end user, which really reflects on our direct customers where there’s been a sharp reduction of inventory out there. And are we talking significant? Yes. We believe it is — what we’ve seen is very significant and we anticipate that to continue, which reflects in our revised guidance for the rest of this year, which is the next less than six months out there. Beyond that, who knows?

Chip stocks are trading vehicles until this trade war is resolved. AVGO didn’t just miss revenue expectations and lowered guidance for 2019, they called out “broad-based” slowdown in DEMAND in addition to losing their largest client in Huawei. Market is still acting as if this trade war is just going to get patched up at the G20. I see nothing in the actions or words of the Chinese to arrive at that conclusion.

So many Macro-themed data points to follow to better gain context and insights:

President Donald Trump said “it doesn’t matter” if Chinese President Xi Jinping agrees to meet with him later this month to restart negotiations over trade because the U.S. is collecting billions of dollars in tariffs on goods from the country.

Trump extended a deaf ear to the more than 600 companies – including Walmart, Target, Costco and many others – that warned him that tariffs will have a “significant, negative, and long-term impact” on the US economy and harm consumers.

If you want to know the WH view toward the US-China trade war, then you kinda gotta watch this: Vice President Mike Pence’s Remarks on the Administration’s Policy Towards China

The false monopoly: China and the rare earths trade

Jane is not only Samantha’s Live Trading Room moderator, she facilitates client engagement and relays Samantha’s trade ideas into the LaDucTrading StockTwits Premium Room. A former banking SVP during the GFC, she now actively trades full-time and actively shares her trading ideas, plan and process.

Why is it so hard for people to be honest about their trading results?  Because losing, especially when you understand the game and can play it well, sucks! Your ego wants to say, “I kick ass!” but your P&L says otherwise.  I mentioned in the ST room earlier this week that I was trying to be cute with some trades and that the market Gods were making me pay.  I overtraded and had far more losers than winners.  Prior to this week, I had a +11% and +24% ROCC, respectively.  This week I had a -9% ROCC. No one wants to give back gains, especially when some of the errors were easily avoidable if you had stuck to your plan.  The only thing that makes me feel even the slightest bit ok about this week is that I closed 18 trades of which only 4 were winners, yet I managed to contain my losses considering such a horrible ratio. As others know, my one word once I’m out of a trade…..NEXT!

In last night’s post I talked about $PXD and how my entry from Wednesday was challenged yesterday when we had the oil spike from the tanker attacks. The trade ended up flat on the day, giving back the 20% in gains I had as of close Wednesday.  My original thesis was that a break of the important support / resistance area was bearish and that my stop would be a move back over what has again become resistance.  The stock moved down throughout the morning, with some recovery in the afternoon.  My thesis remains bearish and with the weak technicals backdrop and room to move before heading outside any bollinger bands, I am looking for follow through next week.  As of close I am up 11% on the put options. 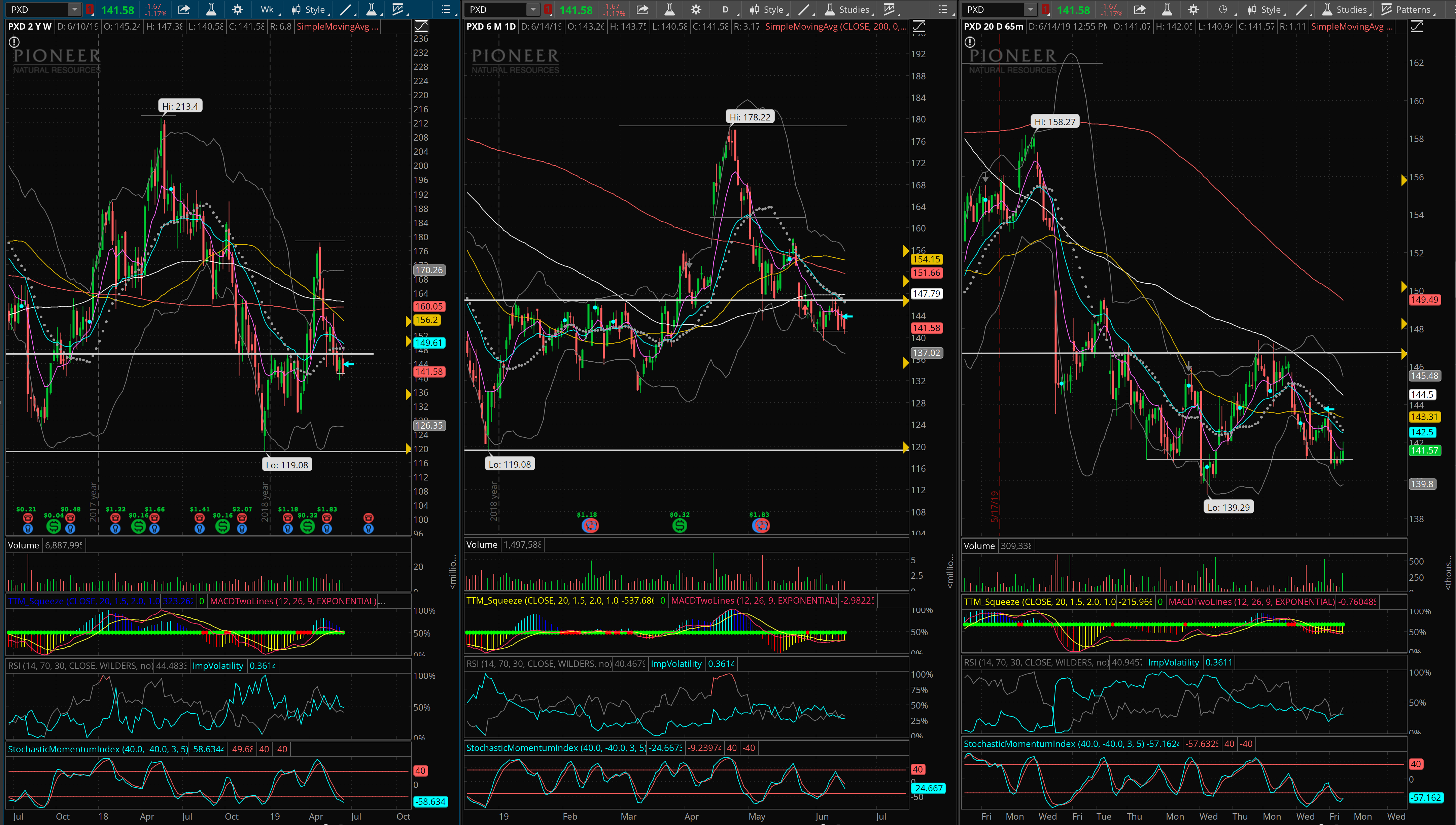 On Wednesday I presented a short thesis on $EA. It was weak this morning and I took a fairly aggressive entry when it looked like it may break below that wedge pattern. It followed through nicely during the morning hours, but rallied back to finish slightly back inside the wedge.  It remains in the hourly channel, making lower highs and lower lows. I will note that the daily and weekly squeezes have yet to fire and the bollinger bands are tight on both timeframes, so it’s possible there will be some chop before the bands open up a bit and we get continuation lower.  I took August puts and am completely flat on the trade as of close today.  Thesis remains the same and I bought lots of time to see if it will play out in my favor. 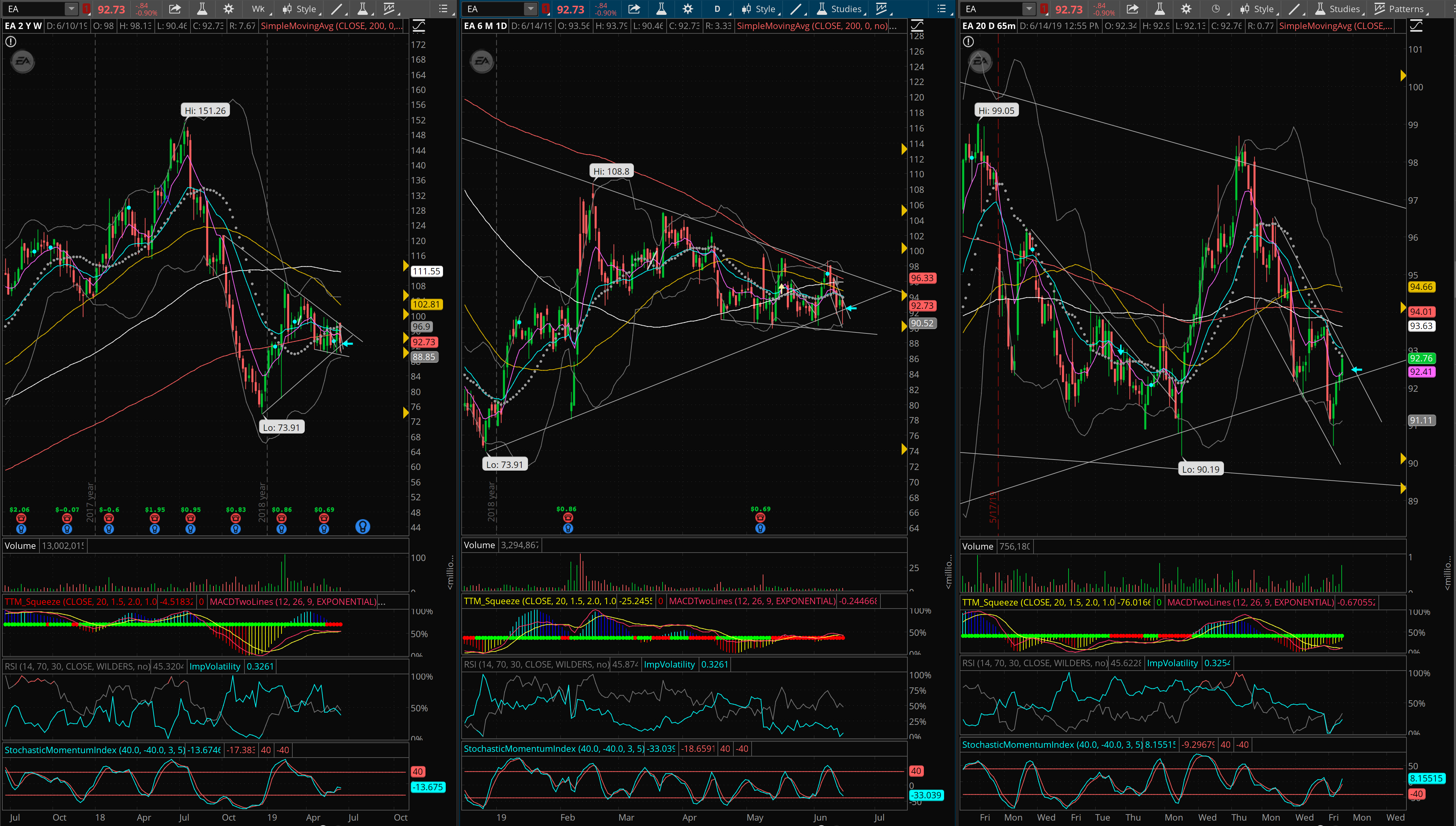 How Do Women-Led Firms Differ from Those Led by Men?

`Despite the significant increase in female labor force participation in the postwar era, this does not appear to have led to greater participation of women in the highest executive position at the organizations where they work.

Spending at least two hours a week in nature may be a crucial threshold for promoting health and wellbeing, according to a new large-scale study.