My volatility senses were piqued last Monday. I sent out a warning for a market rollover: 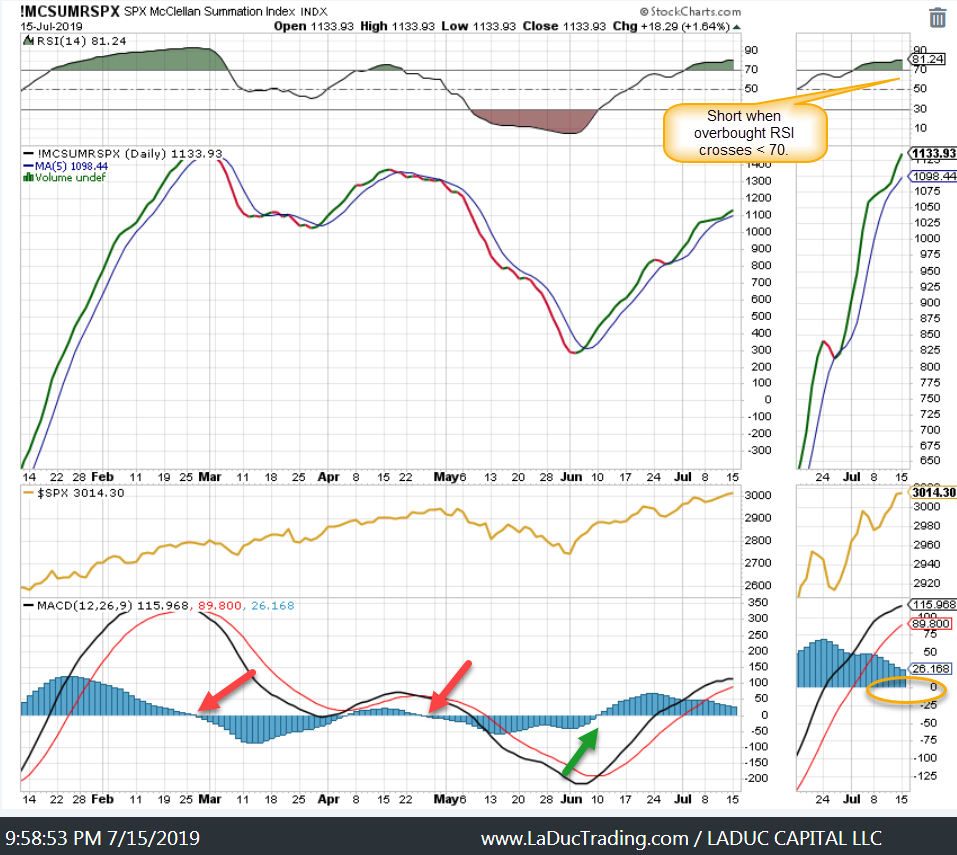 If you thought that was a nice move from 3018 to 2985, well consider this: my breadth indicators (this is but one) are indicating the roll-over is just starting. The indices just don’t know it yet 😉 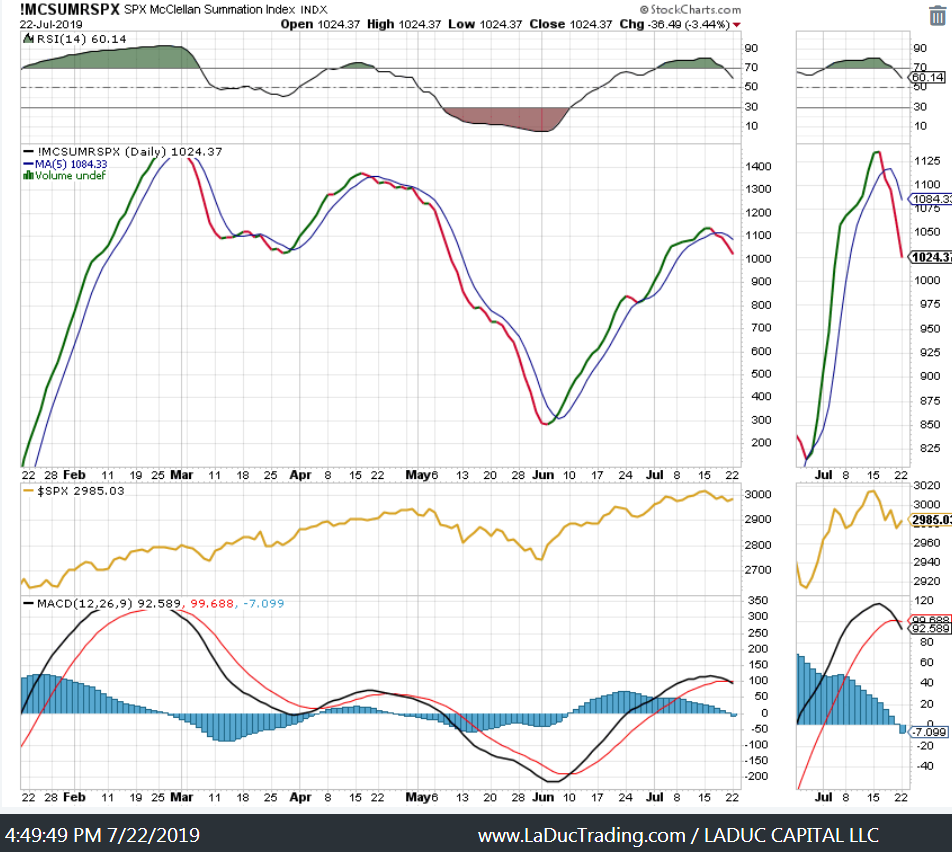 Fave Chart is NYSE for charting. Here I use the Bullish Percent NYA indicator to visually represent ‘flow’. Flow is about to break the 20D pulling NYSE down into that (yellow) trend-line (top panel). I suspect it breaks but not until a week after FOMC. (This timing view is combined with my intermarket analysis work on my stock-bond-volatility ratio read.)

And Just as Retail Comes Back into the Market

$62 billion — That was how much retail money flowed into exchange traded funds for June, marking the highest monthly inflows since January 2018, and reverses outflows of $14 billion in May, according to Jefferies.

Then you add in the fact that SPY is constricted, meaning, the trading range is the narrowest since 2017 and you can equate this suppressed range to trying to contain a puppy in your arms. See how long that lasts. 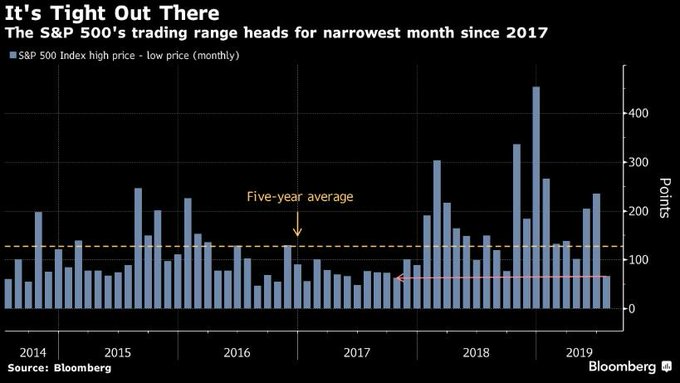 And then there’s the other sentiment I follow: VIX option activity…

With that, expect my trade alerts to potentially be Very Busy next few weeks/months as I firmly believe Volatility will be picking up in earnest as FOMC finishes its business and we can commence with our seasonally weak stock market period!!
Stocks come under pressure seasonally from the mid July into the Fall, as earnings wind down (whether they beat or not) and as Fed Cuts (satisfying neither Bear nor Bull). Also, keep in mind my Main Thesis for 2019: Rate cuts only embolden Trump to raise Tariffs.
Oh, and don’t ignore Mexico + Tariff Threats on Trump’s Immigration fight. #HeadlineRisk. 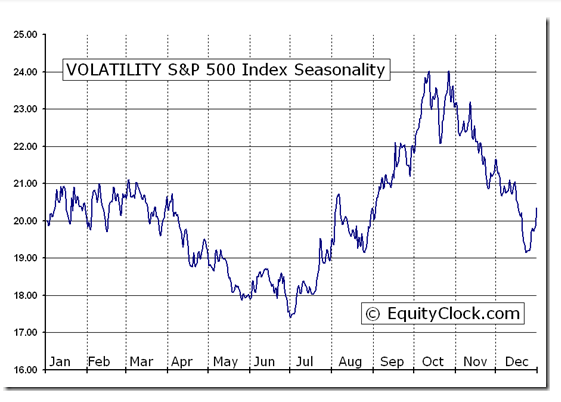 And last but certainly not least…
Markets have already acted as if 50 bps are coming in to “insure” against recession risk.The hope is that the dovish policy, of an insurance rate cut or two, can kick the bear case down the road. A more immediate concern is the effect on Volatility from debt ceiling passing! Yes, you read that right. Once passed, Munchin will go about withdrawing large swaths of liquidity which will invariably cause $DXY to break up. Timing is not known but structurally, the removal of liquidity is Volatility inducing. So why wait? Get your risk-off positions in place before the markets do!

There Is An Alternative: Go Abroad! 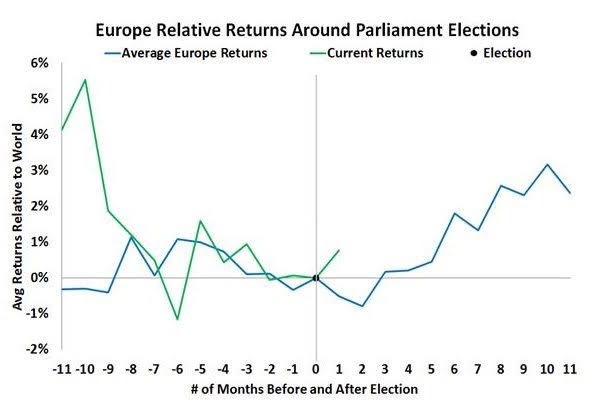 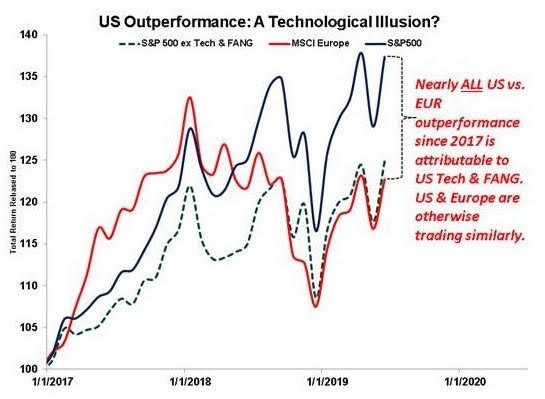 U.S. MANUFACTURING output was up by +0.3% in the three months Apr-Jun compared with the same period a year earlier, slowest rate of growth since Nov 2016: 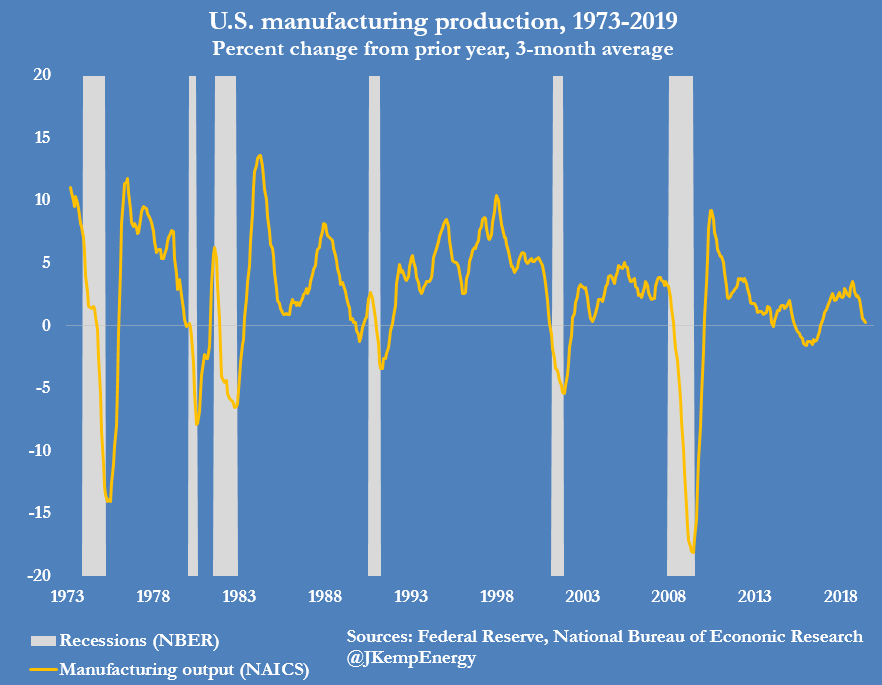 The Chicago Fed National Activity Index, a measure of economic activity in the U.S., ticked up in June but stayed at a negative reading.

For June, the index was -0.02, up from -0.03 the month before. The Chicago Fed said that one of the four broad categories that comprise the index–the employment category–contributed positively to the reading at 0.06, up from -0.08 in May.

Production-related indicators had a neutral reading in June, down from 0.08 in May. Industrial production also was unchanged in June. The sales, orders and inventories category decreased to -0.03 in June from 0.02 in May. The personal-consumption and housing category was unchanged at -0.05 compared with the previous month.

With Boris Johnson becoming prime minister, the risks of a no-deal Brexit will rise to an all-time high. Even if the U.K. parliament votes against the maneuver this week, it will still happen unless the EU and the U.K. agree another delay come Oct. 31.

Oil is surging as traders brace for the UK’s response to Iran’s seizure of a British-flagged oil tanker. West Texas Intermediate and Brent crude prices rose more than 2% after Iran seized the Steno Impero and signaled it wouldn’t let go of the vessel until the UK released an Iranian-flagged ship it seized earlier this month

Iran Says It Will Execute Group of Alleged CIA-Trained Spies

Iran, locked in a worsening political standoff with Western powers, has handed down death sentences to several nationals accused of being part of a CIA-trained spy network uncovered earlier this year, an official said on Monday.

U.S. President Donald Trump denounced the Iranian report as “totally false” on Twitter Monday. “Just more lies and propaganda (like their shot down drone) put out by a Religious Regime that is Badly Failing and has no idea what to do,” Trump said. Beyond that, an administration official said the White House doesn’t comment on intelligence activities.

In Tehran, a senior intelligence official told foreign media that 17 people had been arrested. None of the suspects are dual nationals, according to the official, who declined to be identified and didn’t say how many were sentenced to death.

Remarks by U.S. officials on China’s role in the South China Sea are slanderous, its foreign ministry said on Monday, after the United States voiced concern over reports of Chinese interference with oil and gas activities in the disputed waters.

China’s claims in the South China Sea, through which about $5 trillion in shipborne trade passes each year, are contested, all or in part, by Brunei, Malaysia, the Philippines, Taiwan and Vietnam.

In Beijing, Foreign Ministry spokesman Geng Shuang said such comments by Bolton and Pompeo were baseless, adding that the United States and other “external forces” were stirring up trouble in the South China Sea.

A night of protests and clashes in Hong Kong — including tear gas volleys and roving groups of masked men attacking protesters — prompted the strongest warnings yet from the Chinese government and fanned fears of escalating violence.

Around the same time, groups of men wearing white shirts and surgical masks attacked metro passengers in the Yuen Long area, miles away near the border with the mainland metropolis of Shenzhen. While no arrests were made and it was unclear who the assailants were, the group targeted people dressed in black, the preferred color of demonstrators. An opposition lawmaker and several journalists were among dozens reported injured in the melee.

It is official: “Avengers: Endgame” has surpassed “Avatar” to become the highest-grossing film of all time, while the live-action “The Lion King” dominated the weekend box office, setting Walt Disney Co. up for a stellar year.

“Avengers: Endgame” has generated box office receipts of about $2.79 billion in 13 weeks.

“Avatar,” backed by Twentieth Century Fox which is now owned by Disney, held the record for a decade at $2.789 billion, after it knocked “Titanic” off its perch. (That now places those two films, both directed by James Cameron, in second and third place in the rankings.)

“The Lion King,” set a July opening weekend record with box-office receipts of $185 million, according to Box Office Mojo, exceeding the total gross from the same weekend a year ago and surpassing “Harry Potter and the Deathly Hallows Part 2,” the previous record holder that grossed $169.1 million in its opening weekend in July of 2011.

From Datatrek @Google, @Facebook and @Amazon all report this week:

$GOOG is the problem child here: they’ve missed the last 2 quarters and analysts expect a negative comp to Q2 2018.

$AMZN is the only one of the three expected to produce good earnings growth (10%) but remember they face a tough comp to last year.

I had a short trade on TIF last week, but it was just chopping around and remained in that daily squeeze. Last night I discussed again: 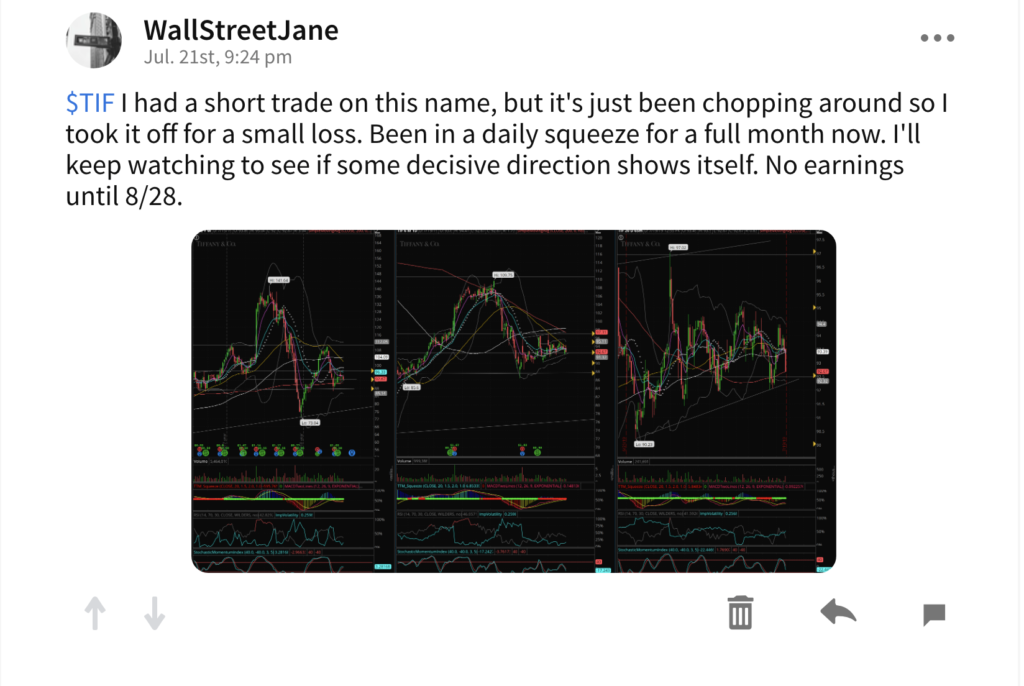 This morning it appeared to be breaking the bear flag trendline and I made note of it:

It remained below the trendline for the rest of the day – closing down 1.01% to $91.73. It still has much work to do if it’s to make a decisive break lower, including the 200WK moving average at 90.74. I took a small position with September ATM calls. Will add upon break and hold below $90. Note that because it’s been in a squeeze for so long, the daily bollinger bands are very tight and it may take some time for it to make another marked move. However, below the 200WK and it’s air below with some room between price and the bollinger bands. 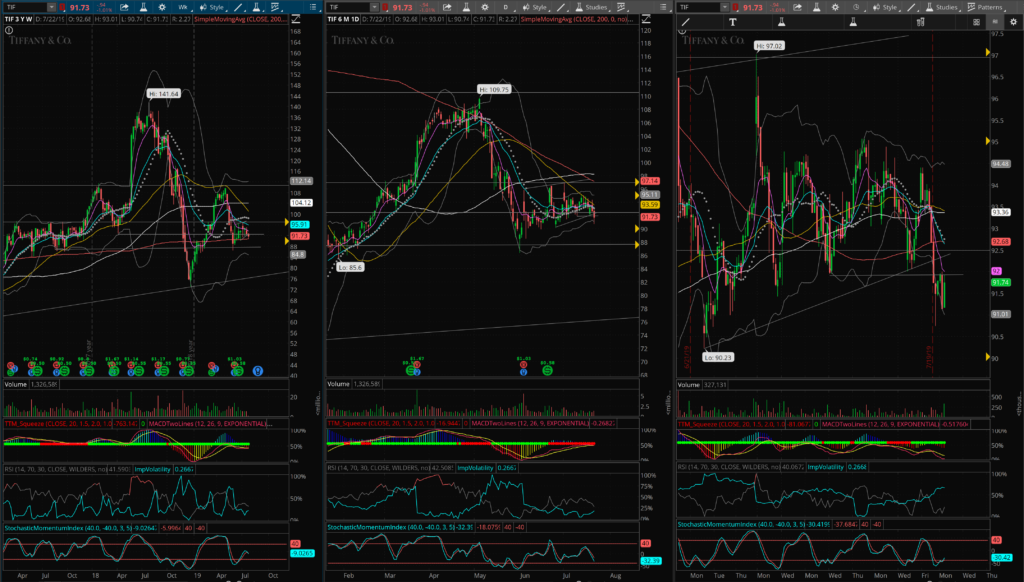 The length of the economic and market expansion – long and slow.  The Economist reviews the arguments

Not a great read, but a great short watch thanks to German Public Broadcasting: A women’s Tour de France?