Market Thoughts: As Good As It Gets?

“What makes it so hard is not that you had it bad, but that you’re that pissed that so many others had it good.” Melvin Udall in As Good As It Gets movie

Correct me if I’m wrong, but many traders are in a state of angst. Despite all-time-highs, they missed the rally off the December lows after missing the Oct correction. Now that the Fed is intonating a cut and markets keep marching higher, the predominant theme seems to be not that we traders have had it so bad but that we’re pissed the market has had it so good.

Maybe the better attitude would be to “be bullish, but with every trade expect to be wrong”. That’s been my thinking since about $2700 honestly. Now that we are approaching SPX $3050 – price target to top of the trend-line from January 2018 – I can’t help but view much of the Goldilocks data and wonder, is it time? Is market sentiment and structure diverging, but the market doesn’t know it yet?

I mean, at some point the markets rising on the diminishing returns of rate cuts, potential trade deals and deficit-burdening infrastructure bills will have me yelling , “We’re there. This is as good as it gets!” Alas, I’m not there yet, but it feels closer.

China’s economy slowed to the weakest pace since quarterly data began in 1992, rising 6.2% in the second quarter from a year earlier. And yet…There was better data beyond the headline number, with factory output and retail sales growth beating estimates for June.

For US stock market…

S&P 500 earnings estimates for 2020 have remained lofty even as current-year estimates have fallen hard. The street was looking for 6-8% growth seven months ago.

One quarter does not a trend make, but worth watching! Share repurchases by companies recently contracted for the first time in seven quarters. 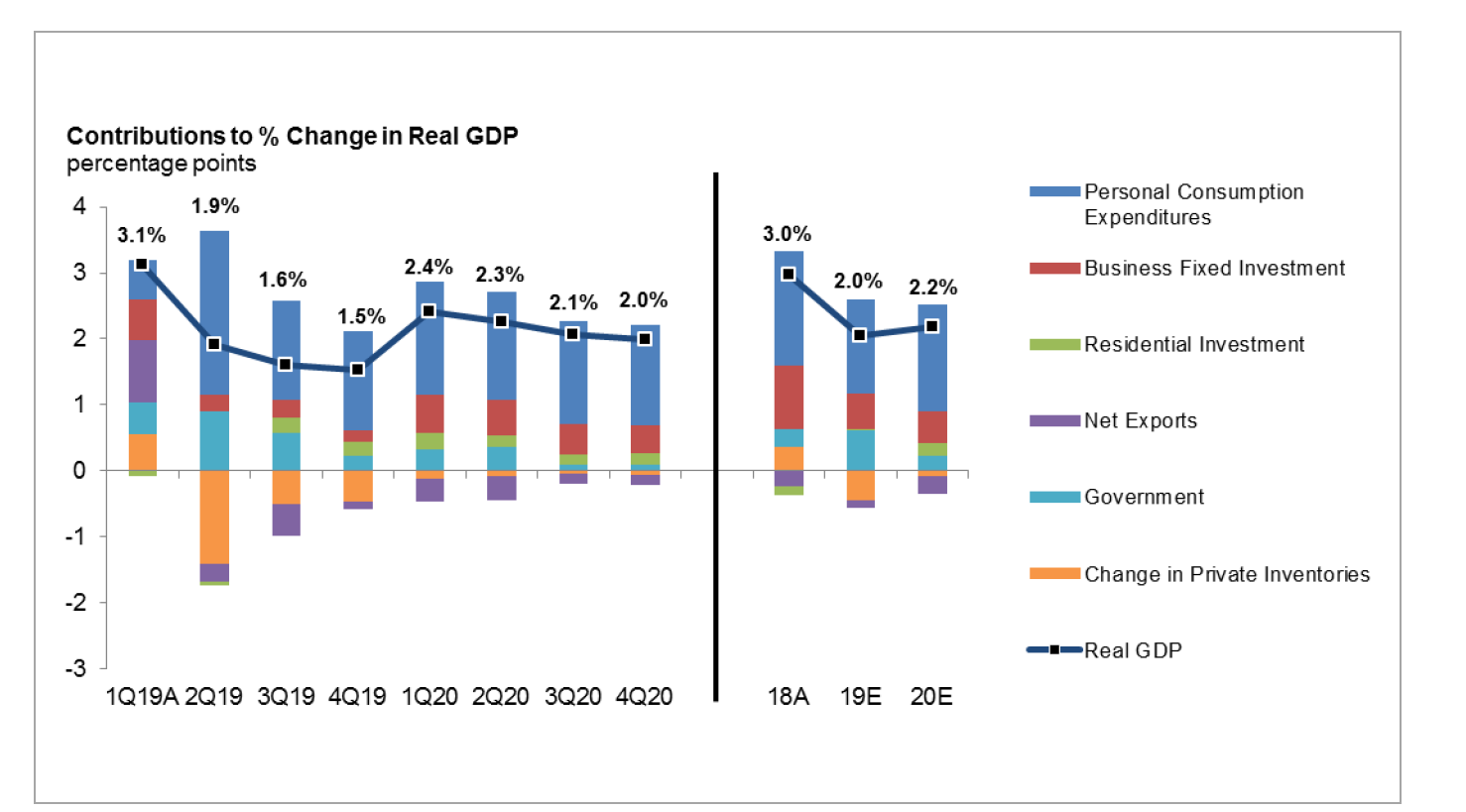 Granted, the EPS bar to beat is on the floor so much easier to step over, BUT the bar is low for good reason: 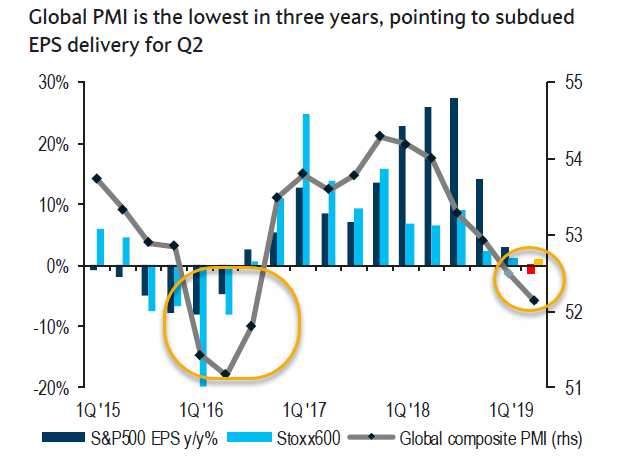 The riskiest of junk bonds are seeing some selling pressure. Their spread over Treasuries is widening much faster than safer bonds that are rated higher.

Over the past 50 days, the difference between those risky bonds and safer ones has expanded quickly, prompting some to wonder what bond traders know. Like the yield curve inversions, the times when it served as a warning led to some very large declines, and the overall risk/reward was negative across every time frame. @SentimentTrader

Tuesday sees the release of the RBA minutes to this months rate cut meeting decision, UK employment data, EU trade.. Release of US retail sales for Jun will be closely watched along with import and export prices for the US. Industrial production, business inventories, and the NAHB housing market index. But the high-point of the day will be listening to Fed Chair Powell speak in hopes he will communicate the size of the anticipated rate decision.

The New York Fed’s Empire State manufacturing survey’s main index rebounded 12.9 points to 4.3 in July, the New York Fed said Monday. Economists had expected a reading of 0.5, according to Econoday.

The gain partially reverses a steep fall in June, when the index plunged by a record 26.4 points to minus 8.6, the lowest level of the index since October 2016. 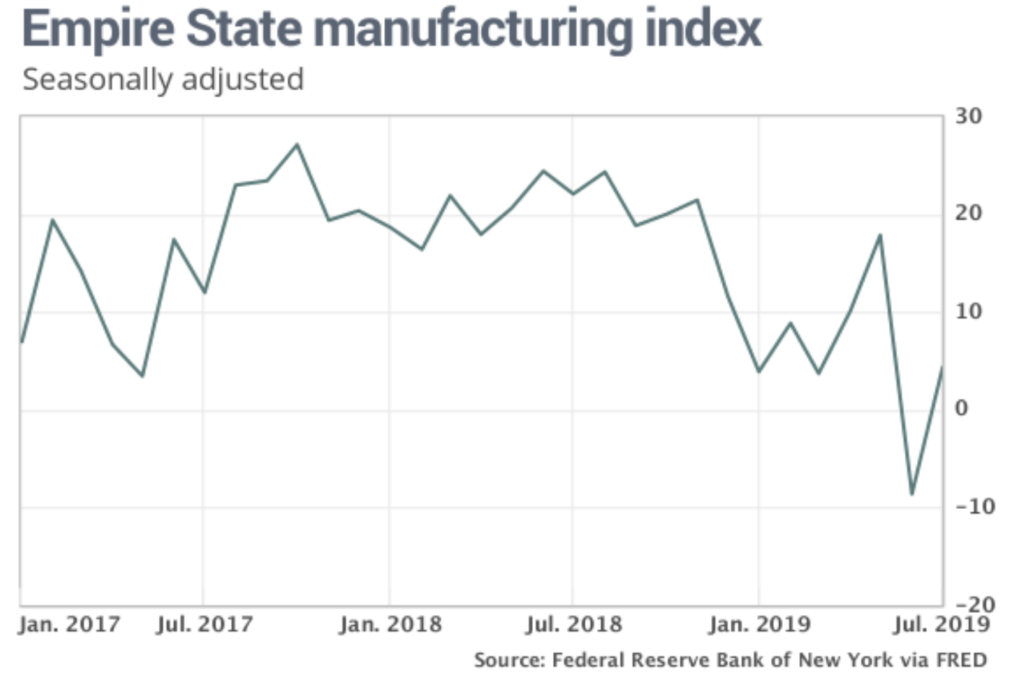 China’s economy slowed to the weakest pace since quarterly data began in 1992 amid the ongoing trade standoff with the U.S., while monthly indicators provided signs that a stabilization is emerging.

Gross domestic product rose 6.2.% in the April-June period from a year earlier, below the 6.4% expansion in the first quarter. In June, factory output and retail sales growth beat estimates, while investment in the first half of the year also gave further evidence that stimulus measures to curb the slowdown are feeding through. 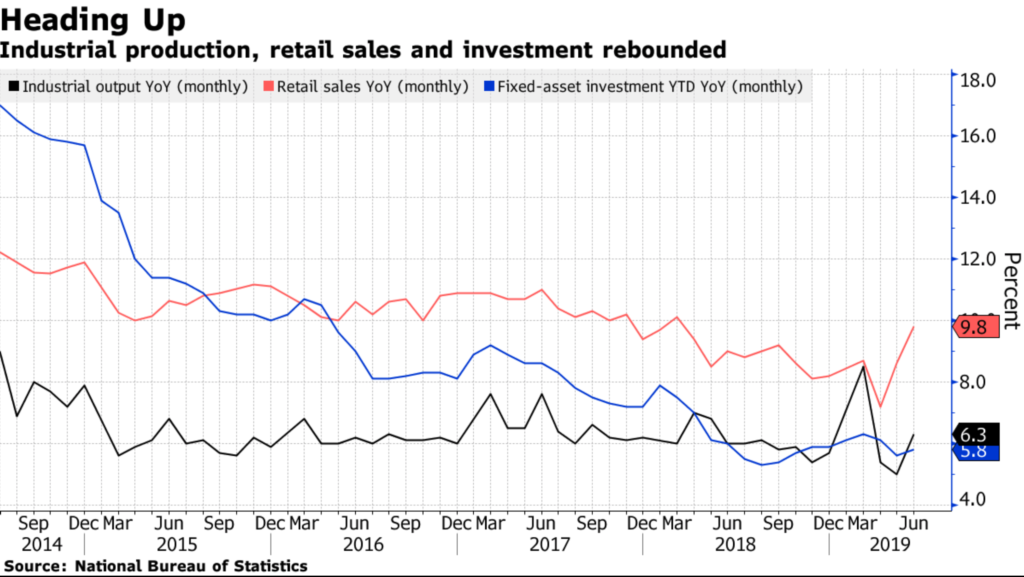 China says will freeze out U.S. companies that sell arms to Taiwan

China’s government and Chinese companies will cut business ties with U.S. firms selling arms to Taiwan, China’s Foreign Ministry said on Monday, declining to give details of the sanctions in a move likely to worsen already poor ties with Washington.

China claims self-ruled and democratic Taiwan as its own and has never renounced the use of force to bring it under Beijing’s control. China regularly calls Taiwan the most sensitive issue in its relations with the United States.

Last week, the Pentagon said the U.S. State Department had approved the sale of the weapons requested by Taiwan, including 108 General Dynamics Corp (GD) M1A2T Abrams tanks and 250 Stinger missiles, which are manufactured by Raytheon (RTN).

China said on Friday it would sanction U.S. companies selling weapons to Taiwan but did not elaborate.

Thai Prime Minister Prayuth Chan-ocha formally resigned as the head of the military government on Monday, saying the country would function as a normal democracy after five years of military rule.

Prayuth stays on as prime minister with the backing of pro-military parties in parliament and a military-appointed upper house under a constitution that critics say stifles democracy and enshrines a political role for the military.

Oh and what about the New NAFTA?

With the US debt ceiling and spending authorization issues not resolved, many observers are getting more pessimistic about the likelihood that the US Congress passes the USMCA this year. We have long been skeptical of the prospects. In the past, Congressional approval of free-trade agreements has required careful coordination and some tough negotiating, which does not appear present now. There seems to be little interest in bipartisan action. Since July 4, PredictIt.Org wagers give ratification at less than a 30% chance. Marc Chandler

A court hearing on the CVS Health (NYSE:CVS)-Aetna (NYSE:AET) merger is scheduled for July 17. U.S. District Richard Leon is expected to rule on the deal shortly after hearing the oral arguments.
CAT is due out with its monthly sales report.

Qualcomm (QCOM), Intel (INTC), Micron (MU): Reported that the U.S. may being to allow new sales to Huawei in as little as two weeks from now.

Huawei, the world’s largest telecommunications equipment maker, was added to a Commerce Department list in May that prohibits U.S. companies from supplying it with new American-made goods and services unless they obtain licenses that will likely be denied.

But late last month, after meeting with Chinese president Xi Jinping, President Donald Trump announced American firms could sell products to Huawei. And in recent days, Commerce Secretary Wilbur Ross said licenses would be issued where there is no threat to national security.

U.S. companies can currently sell goods in order to maintain existing networks and provide software updates to existing Huawei handsets, but are prohibited from making new sales of American-made goods and services. Out of $70 billion that Huawei spent buying components in 2018, some $11 billion went to U.S. firms including Qualcomm, Intel and Micron Technology.

China has hinted that it may sanction US companies General Dynamics (GD) and Honeywell (HON) if a $2B US weapons sale to Taiwan goes through.

Execs from Apple (NASDAQ:AAPL), Amazon (AMZN), Facebook (NASDAQ:FB) and Google (NASDAQ:GOOG) will be called to testify at a House Judiciary Committee antitrust hearing scheduled for July 16-17. The hearing coincides with recent reports that the FTC and DOJ are looking into large tech companies to potentially build an antitrust case.

Here are five bellwethers whose earnings will be closely watched for tariff trouble or triumph: (Bloomberg)

In the StockTwits room I talk about how I only trade a basket of around 50 stocks / ETF’s. I follow more, but rarely trade them. I also talked about the advantages of trading a smaller pool of names because it gives you an opportunity to really get in tune with its daily price action. One of my personal favorite trading names is ADSK. I move in and out of it on a regular basis, having a degree of confidence I wouldn’t otherwise have on a name that just popped up on a scan. From the weekend review: 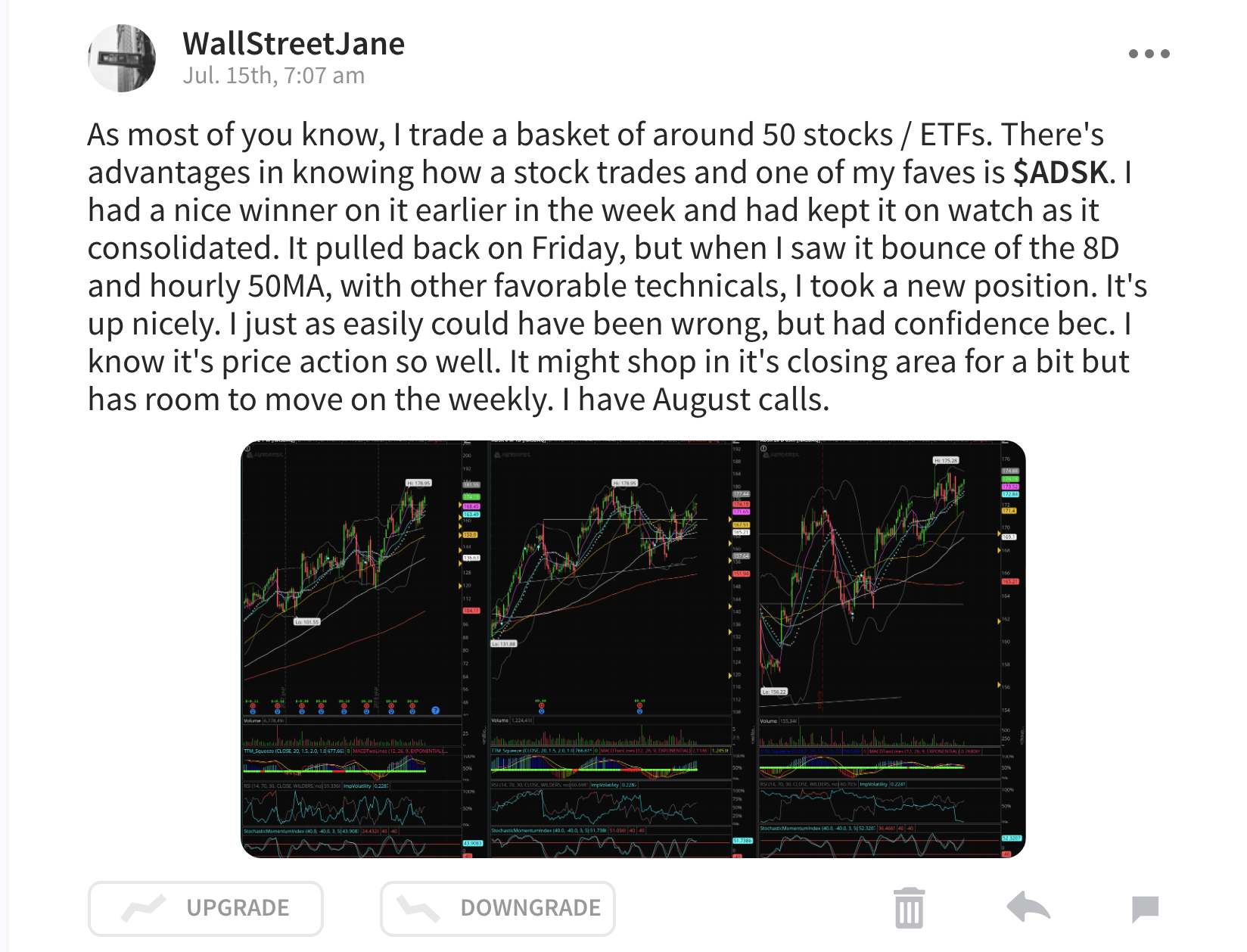 As I suspected, it pulled back some today, but closed well off the lows and the backdrop remains favorable for higher. It’s also in an hourly squeeze above all of the moving averages so long is the path of least resistance. 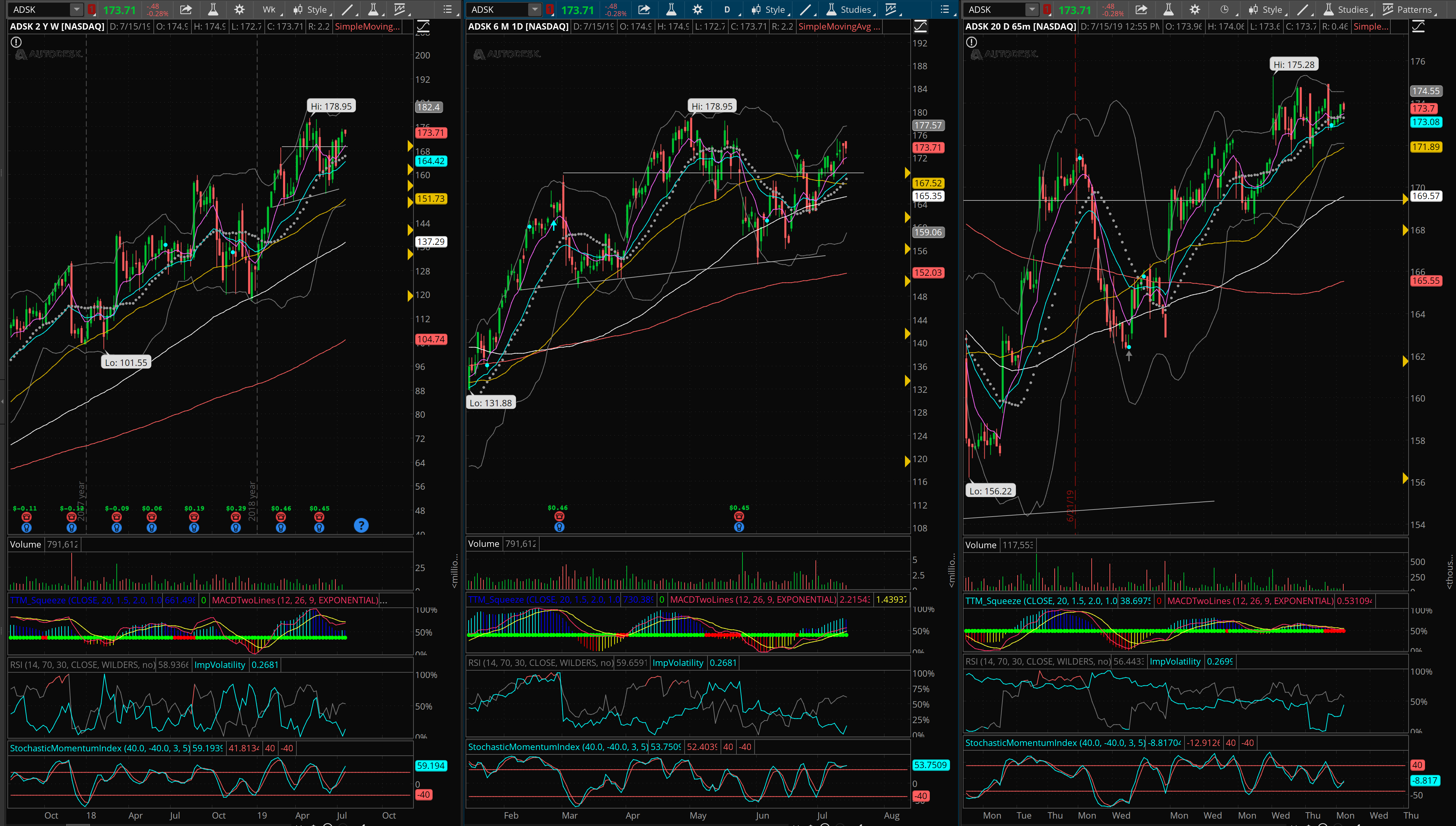 It took a Village:  Apollo 11 moon landing had thousands working behind scenes

Binance’s CEO Made A Serious Bitcoin And Crypto Warning

Cool Chart! Visualizing Trump’s Relationship With the Price of Oil