In a prepared statement, Fed Chair Jerome Powell signaled a rate cut citing “crosscurrents” that are weighing on the economy. Initially, dollar dumped and acted as a catalyst for S&P futures to shoot up. The bullish statement is the salve markets wanted to go higher as earnings are decelerating, global trade deteriorates and business investment weakens. Traders are now placing the odds for a July cut of 25 basis point at 80% (with only a 20% chance of a 50 basis point cut).  Expect more dovish policy going forward and lower interest rates. .

Lower rates gave a boost to gold and other commodities. A strong crude oil market is making energy the day’s strongest sector, up more than 4% today to the highest level since May, and back above its 200-day moving average. My first sector call out this morning was Crude and related plays. The falling dollar not help industrials like CAT and DE which were suggested shorts from over a week ago and both are still working. The falling dollar did also not help China and Emerging markets, which is likely a tell for more weakness, especially leading into their GDP print Monday. 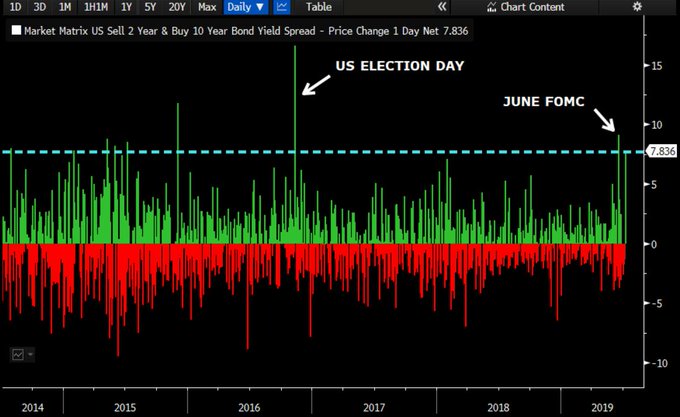 And with that, the 10-year yields spiked. It was the biggest steepening since June’s FOMC The runner-up? Election day! H/T @iv_technicals

Federal Reserve Chairman Jerome Powell said the U.S. is suffering from a bout of uncertainty caused by trade tensions and weak global growth, but he pledged to do whatever it takes to shore up the economy in what Wall Street took as a sign the central bank will cut interest rates soon.

In testimony before Congress, Powell said ongoing trade fights with China and other countries have contributed to slower growth at home and abroad and pose more risk to the U.S. economy.

The Fed, for its part, is prepared to “act as appropriate to sustain the expansion,” Powell reiterated, using a phrase that economists say points strongly to a rate cut at the bank’s next meeting at the end of July.

U.S. oil producers on Wednesday cut nearly a third of Gulf of Mexico crude output as what could be one of the first major storms of the Atlantic hurricane season threatened offshore oil production and began soaking Louisiana with heavy rains.Fifteen production platforms and four rigs were evacuated in the north central Gulf of Mexico, according to a U.S. regulator as oil firms moved workers to safety ahead of a storm expected to become a hurricane by Friday.

The US government could face a potential default in September, according to a Washington think tank.The report from Bipartisan Policy Center says lower than expected tax revenues now mean there is a “significant risk” that the federal government will run out of borrowing authority in the early part of September.

President Donald Trump warned on Wednesday that U.S. sanctions on Iran would be increased “substantially” soon, as the U.N. nuclear watchdog held an emergency meeting at Washington’s request to weigh Tehran’s breach of a nuclear deal. Trump also accused Iran of secretly enriching uranium for a long time but offered no evidence, and Iran said after the 35-nation meeting in Vienna that it had “nothing to hide”. U.N. inspectors have uncovered no covert enrichment by Iran since long before its 2015 nuclear agreement deal with world powers.

The Bank of Canada has begun to count the potential costs of escalating trade wars on the nation’s economy in a series of analyses released Wednesday as part of a rate decision in which tensions featured prominently.

Japan and South Korea say they’re willing to meet over Tokyo’s move to restrict vital exports to its neighbor, but neither has much political incentive to climb down from their worst dispute in decades.

Decades of mistrust make it difficult for Japanese Prime Minister Shinzo Abe and South Korean President Moon Jae-in to retreat from their budding trade feud. A series of looming deadlines, including a Japanese upper house election on July 21, are only raising the political pressure on both men, who can’t afford to look weak dealing with disagreements rooted in Japan’s 1910-45 occupation of the Korean Peninsula. 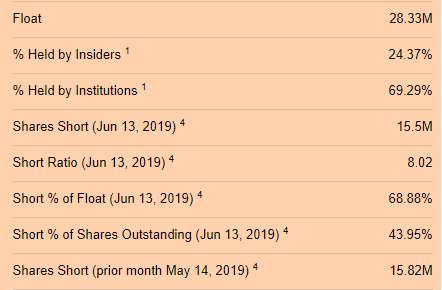 Sometimes you feel like a nut, sometimes you don’t. What if sometime’s you’re just nutty? I am!

Anyone who, once they understand the technical aspects of trading, says psychology isn’t a big part of your trading success is nuts!

Taking my trading today as an example; I started out the day on a high ( I call BS if you say you’re totally immune to this feeling – esp. if trading options) given the nice gap up at the open. I placed some trailing stops, but was feeling real good. We start to get some fade off the open as one would expect, but then it starts to accelerate and even though I put on my stops and knew I would be locking at at least some profits, I just started feeling pissed off that I didn’t take profits at the open. So my stops hit, I know I’m green for the week, and yet I continue to feel annoyed.

So what am I going to do about it? Revenge trade? Throw something? Nah. That’s not my style. I’m more about the talk out loud to yourself style of coping. Jane, what the f^%& is your problem? You followed your plan, protected gains and cut losers, so why the irritation? I don’t have an answer other than to say that it’s about money. That’s the straight up truth. Money and how much you have of it will always be a touchy and personal matter, and most won’t talk about it at all. The fact is this is now my livelihood and the pressures are real to perform to a level where I can maintain my fairly simple lifestyle. I love trading. I love the challenge of making well thought out analysis work for me and, frankly, my pocketbook. 100% if you make good decisions the profits will come, but it doesn’t mean I won’t be irritated when I feel like I left money on the table.

Here’s the good news: I have adopted a one-word mantra for days such as this…..NEXT!!!!!!

Fingers Crossed more people can benefit:  H.I.V. Is Reported Cured in a Second Patient, a Milestone in the Global AIDS Epidemic