A client asked me to do a Guest Captain Macro-to-Micro Power Hour on SPACs (special purpose acquisition companies), so I invited my go-to SPAC expert @sandiegosam to discuss them. Craig introduced me to George Kaufman who has the institutional perspective. His firm sponsors the $CHAQ SPAC among others. The result? An outstanding discussion on SPACs – from market structure, leadership, targets, and tickers to how both retail and institutions play in it. If that wasn’t exciting enough, we also brought in a macro lens to compare SPACs against treasuries, investment grade corporate bonds, liquidity and time! As a result of all the ground we covered, audience questions and review of many popular SPAC names, we ran a tad over in duration of interview. I don’t think you’ll mind though…

In this very special Macro-to-Micro Power Hour, LaDucTrading had the distinct pleasure of hosting two Guest Captains: Craig Samuels + George Kaufman to share their 2020 SPAC highlights, along with mechanics of trading these special asset class vehicles, plus their 2021 insights. 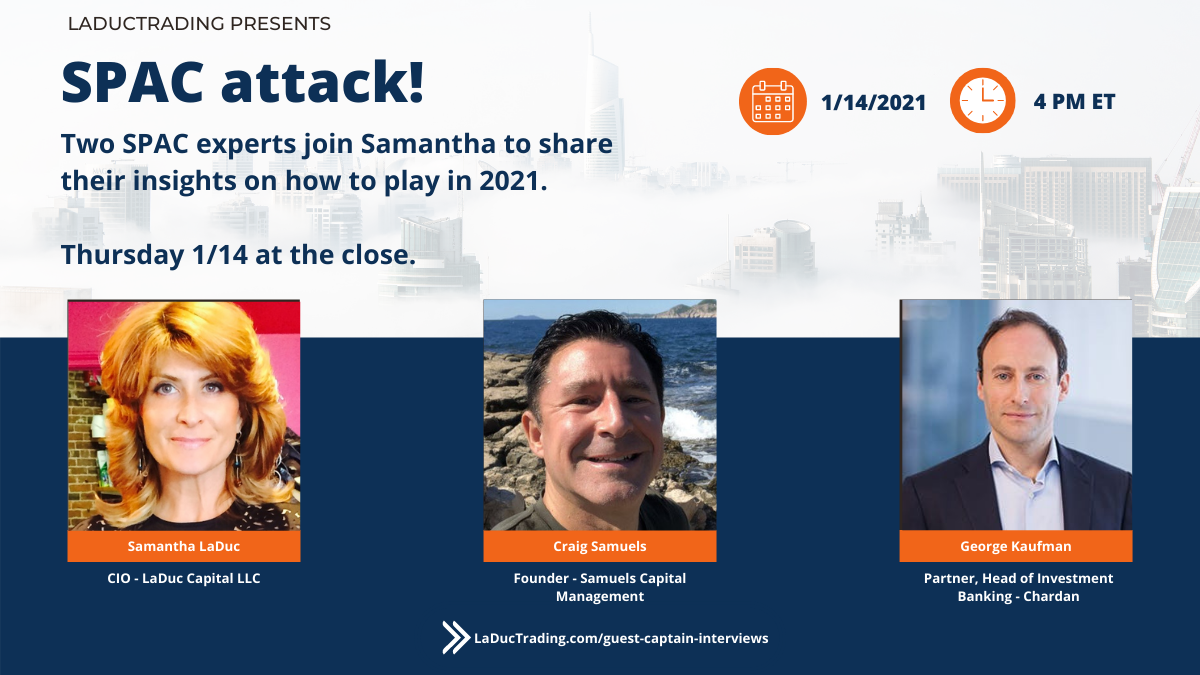 A SPAC is different from a Direct Listing IPO or Hybrid IPO. The SPAC does an IPO first, when it is in essence an empty shell with nothing to say and no financials to project. Then it goes out and finds a target company and does a merger to take the target public.

A  SPAC raises money from investors to write this “blank check” initial public offering, then uses the money to look for a private company to merge with.

In the merger, the target private company gets the money that  has been raised and the SPAC shareholders get shares in the new combined company which trade publicly.

The result is that the target company has raised cash and gone public through the merger.

It is an alternative to an IPO that can be faster and perhaps offer better price.

How Big You Ask?

Maybe the biggest capital markets story of 2020 was the boom in SPACs.

Some $80 billion in SPACs were listed in 2020, meaning the year turned into an epic bonanza for investment bankers, lawyers and companies looking to go public in a SPAC deal and the investors that got in early… 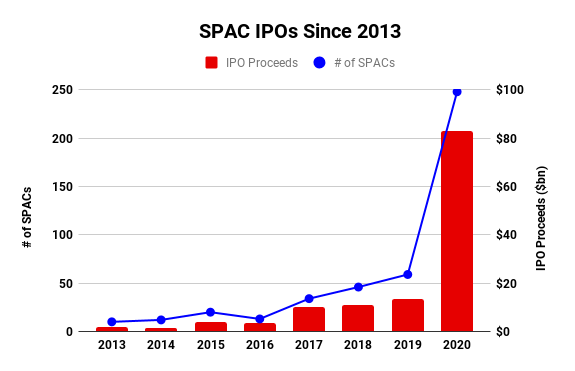 via IPO Scoop
More than two dozen SPACs (special-purpose acquisition companies, or blank-check companies) were priced last week, raising nearly $7 billion – a record in the number of deals and the dollar volume raised, according to SPAC experts at Renaissance Capital and SPAC Insider. On Thursday night, Jan. 7th, an astonishing 14 SPACs were priced.

The frantic pace of issuance has created a pool of almost $90bn in SPAC trust accounts — almost four times what it was a year ago. SPACresearch 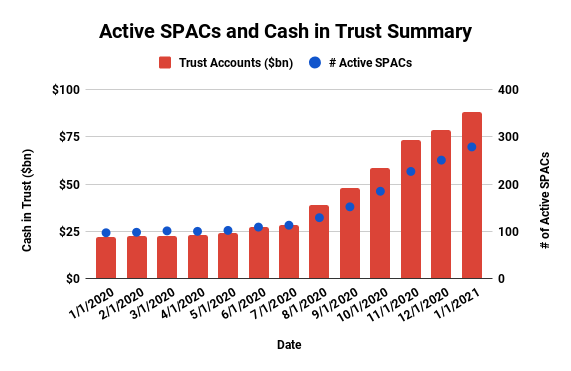 Remember: SPACs typically seek acquisition targets that are at least 3-5 times the size of their trust accounts. That means the active class of SPACs may eventually take public roughly $350bn worth of total enterprise value. SPACresearch

The space for SPACs is so fast-growing that the dollar amount raised in the first week of 2021 was more than 50% of what was raised in all of 2019.
And the #1 top performing SPAC of 2020 was an electric vehicle charging station play, called Quantumscape – QS.
(Irony: Samantha recommended QS to clients not for its ‘SPAC’ qualities but because at one point there was no inventory available for shorts to cover. It was a classic short squeeze that resulted in a rise from ~$10 to $132 in two months!)

Yes, There Are Risks

There is the misconception that a SPAC raises money now, in a SPAC IPO, and uses it later, in a SPAC merger, to take a company public.
But in most SPACs, over two-thirds of IPO proceeds are returned to shareholders and new equity is raised at the time of the merger.
So how do traders/investors of SPACs protect themselves – from redemptions, dilution – let alone have the confidence that the SPAC is good at finding deals?
Craig and George both agree the confidence game lies with the leadership, but the most valuable ingredient is the target company they can secure.
In total, some ~400 SPACs have come to market, potentially swamping the supply of viable targets. Some of the SPACs have out-sized valuations as a result of money chasing these new “can’t lose” issues. A reset is often expected until a deal is announced.
Another component of risk not discussed is the real-money investors who buy SPACs as a way to invest in an IPO-to-be-named-later which in fact is subsidizing hedge funds who buy SPACs for free money. This was written about in an article “A Sober Look at SPACs” by Michael Klausner of Stanford and Michael Ohlrogge of New York University. They refer to the hedge funds who regularly do these free-money SPAC trades as the “SPAC Mafia.”

Taking any private company public is an uncertain endeavor that could be a home run or a dismal failure, and a SPAC adds further uncertainty because it hasn’t picked a private company to take public yet. It’s a meta-IPO; you don’t know if the company it acquires will be worth the price, and you don’t even know what the company is yet.

Needless to say, SPAC investors must have trust and faith in its leadership.

Craig talked about those SPACs he thinks have outstanding leadership. Some investors of them concentrate their bets based on leadership. Others, like Craig, spread out their money into multiple SPACs betting one will get the target deal.  Then there are the retail momentum day/swing traders that have piled in to chase the momentum, the story, driving up valuations. There were many tickers discussed – those Craig holds for the strength of the “Celebrity CEO” (Chamath, Ackman, Softbank, etc) to those with strongest track record of getting deals done. To get all the companies he covered – and he has done due diligence on most SPACs out there – you need to listen to the interview as there were many discussed!

This is magic. I have created value from nothing. You give me $10, I give you back your $10 with interest, and I also give you another valuable thing. The warrant costs you nothing, and is worth something. Matt Levine, Bloomberg

The value of a warrant—an option to buy a share of stock in the future for a fixed price—goes up as the volatility of the underlying stock goes up… and lately that is what has been happening!

Samantha mentioned she put together a list of 198 SPACs on Jan7th, 90% of which are in the green and a dozen by triple digits!!

Samantha asked Craig for his list of tickers with potential targets. They depend on the target potential.

$V Visa had previously announced to acquire @Plaid for 5.3 Billion. The deal was terminated today. Plaid works with 1000’s of fintech companies like Venmo, $IPOE Sofi, Betterment, etc. This is a great asset for a #SPAC $BTAQ to get in there – Plaid is a huge asset. @sandiegosam

There are so many private companies that could be approached – Robolox, Stripe, Cavna, Rho, Compass, Webflow – but as George reminds: SPAC popularity all depends on the treasury ‘risk-free’ rate.

What? Macro matters? Yes! These are liquidity vehicles that promise a ‘risk-free’ rate of return, but as Samantha reminded, the ‘height’ of SPAC euphoria seems to time inversely with another anomaly: When inflation expectations are factored in, investment grade corporate bonds now have a negative real yield for the first time in history.  Should this revert, SPAC reversion could be dramatic. Chart courtesy @neilazous

To top it all off, there is a new SPAC called “LMFOA” – almost to taunt the bears. Samantha contends this type of bravado gives fodder to the doom loop theorists that markets led by blank-check SPACs could be an “outlier that reverts” should rates spike higher, and with it, pop the bubble of SPACs which could cause a liquidity event to contribute to market volatility. And volatility reprices everything.
When asked about this, George cautions that market draw-downs (like what happened in March 2020) cause deals to halt as Treasuries take on the safe-haven status. Craig reiterates that when warrants of his favorite SPACs fall to levels of oversold, like a stock, it is time to get the shopping list ready for future SPACs purchases.
None of the panelists can predict when this freight-train of momentum slows, but until it does, the SPAC vehicles are a shiny new toy for traders and investors, both retail and institutions alike, to acquire and trade. Just do so intelligently. Liquidity and interest rates matter.

A follower on twitter has started to compile a list of SPAC resources and sent it to me after we announced this episode. Have a look – it’s a great start!