Market Thoughts: Be Careful What You Ask For, Market.

I can’t use the same title of my Daily post from yesterday again – Stocks and Safe Havens Rise Together – but that’s what’s still happening. U.S. Stocks Rise to Records while Treasuries Rally! And as if on cue: Futures reached $3,000 just in time for fireworks.
We now have another ‘milestone’ reached: The entire US Treasury curve is below the Fed overnight rate. 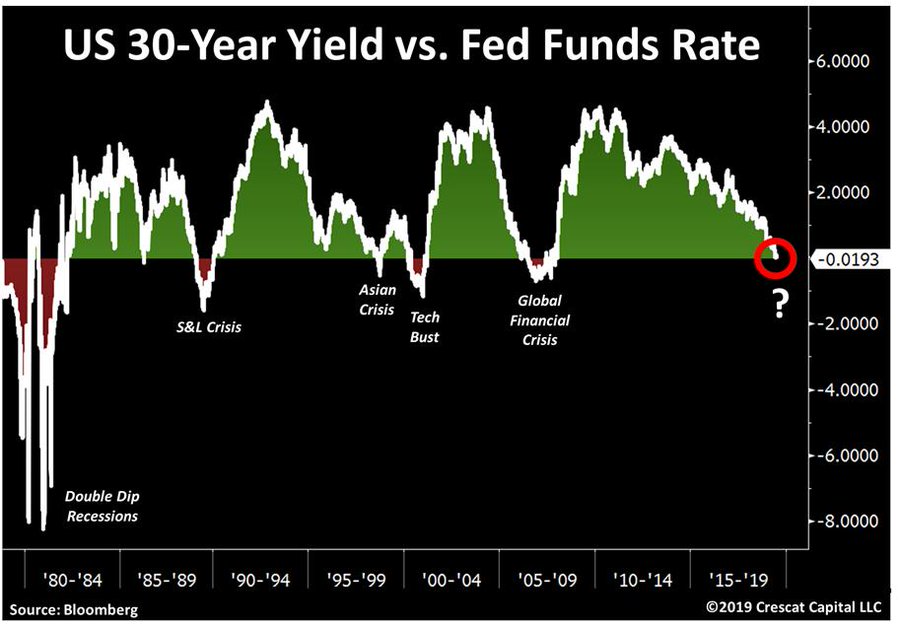 Here’s another moving target: New Treasury issuance has more than doubled since 2017.

“Net borrowing needs will continue to increase due to the expected increase in the deficit combined with funding needs coming from the Fed’s debt run off,” said Margaret Kerins, global head of fixed-income strategy at BMO Capital Markets Corp. “Given the global backdrop with Brexit and China’s economy slowing down, there is really a bid for safety, liquidity and quality — which means Treasuries — and that’s keeping yields in check to some degree.”

Despite the flood of new Treasury supply, Treasury yields haven’t surged because demand hasn’t dampened for the “world’s safest securities”. But if China rebounds, if US-China trade War ends… if BOJ changes its yield control program… treasuries will be sold and yields will spike. So, Be Careful What You Ask For, Market!

Speaking of the BOJ, while many were watching or contemplating fireworks last night – or the ones about to occur in DC – Bank of Japan was making some Yield Curve Maneuvers in the Dark! Again!!
The article is on the Bloomberg Terminal (so not linkable for non-subscribers), but suffice it to say: BOJ wants to steepen their yield curve and if BOJ steepens their yield curve, global yields will jump, Yen will rise and equities will sell off – in time, not all at once people.
So when you return to the market Friday or Monday, look for news of even a very modest change in policy stance by the Bank of Japan and then consider last time they did a stealth move like this in 2016 and again in 2018.

Even sheer mention of it last July 2018 caused this reaction:

The yield curve steepened by about than 10 basis points, which is a huge move — Japanese government bonds rarely move more than a basis point during a day’s trading. Hedging by primary dealers ahead of a 400 billion yen ($3.6 billion) 40-year JGB auction on Tuesday probably exacerbated the reaction.

And in the same way US Stocks and Bonds have been moving up together, they can move down together too. Watch for our 10-year yield to jump with expected lower demand for Treasurys from Japanese investors. I’m not expecting this time to be as dramatic or impactful as the run up to Oct 3rd, but it should afford some nice shorting opportunities in Stocks and Bonds.

ADP print with +102,000 job figure for June missed estimates … and I’m not surprised. I wrotee about it a month ago: Goldilocks and the 3 Bears of “Layoffs, Unemployment Claims, and Payrolls” 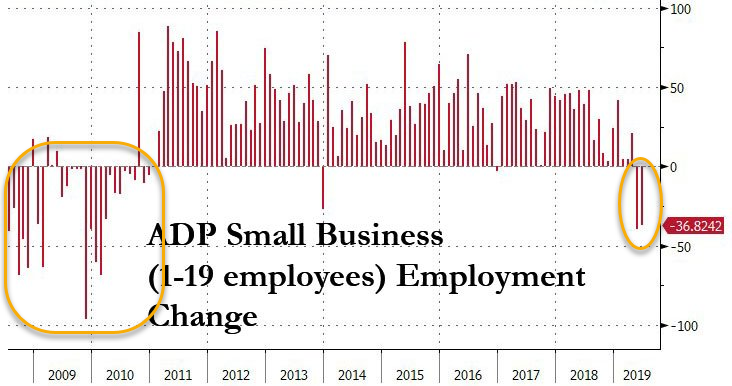 And about those negative yields in Europe!

Anything left with a positive real yield in Europe is getting eaten up right now. Sovereigns don't offer much and if you want to take on corporate credit risk? This is the yield you're getting on the BBG Barclays EuroAgg… pic.twitter.com/ca7D6EK61q 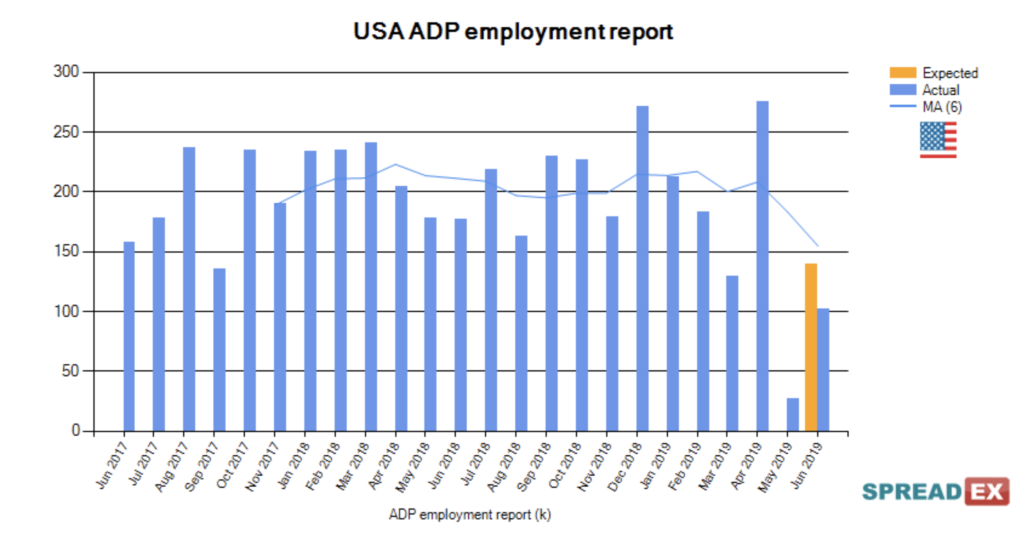 The U.S. trade deficit rose to 55.5B in May, jumping 8.4% to the highest level of 2019 – reflecting record U.S. auto imports from Mexico and other countries. U.S. exports rose 2% to $210.6 billion. The U.S. shipped more soybeans, autos and parts, passenger planes and networking equipment.

The trade gap with China rose slightly in May to $31.1 billion, but it’s running behind last year’s pace owing to U.S. tariffs.

Yet the U.S. is still on track to record a larger annual trade deficit in 2019 compared to the prior year because trade gaps have increased with other key partners such as Mexico, Europe and Canada. The deficit with Mexico in May, for example, was the largest ever. 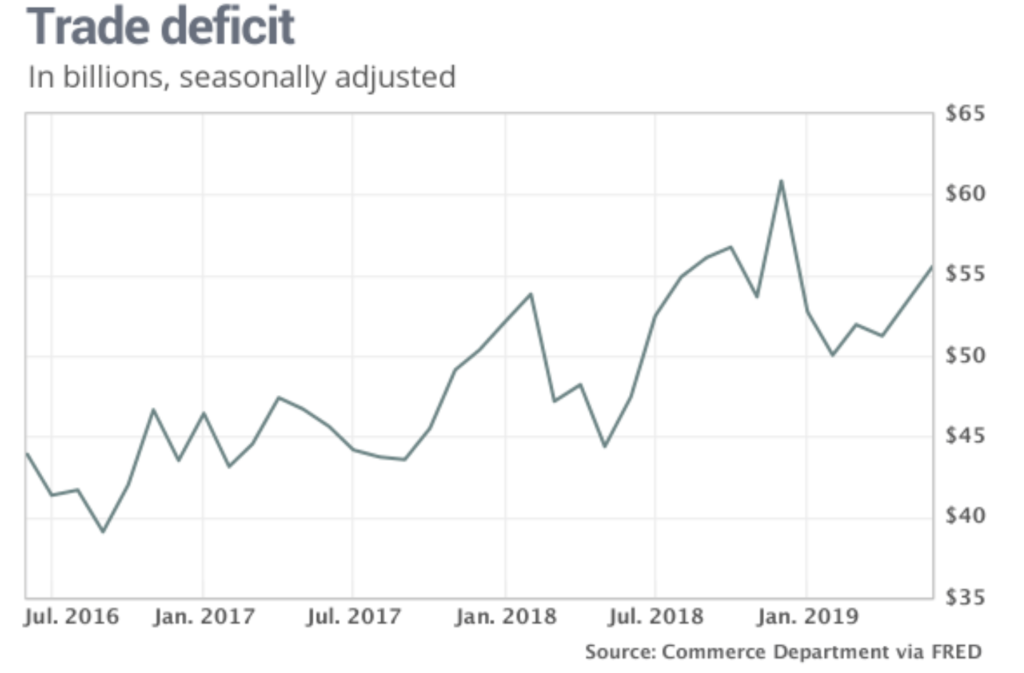 China scolded Britain on Wednesday for interfering in Hong Kong and warned the main contender vying to replace Prime Minister Theresa May that there would be consequences unless he stopped meddling in Chinese internal affairs.

“The UK government chose to stand on the wrong side: it has made inappropriate remarks not only to interfere in internal affairs of Hong Kong but also to back up the violent law-breakers,” China’s ambassador to London, Liu Xiaoming, said.

“I would like to reiterate that Hong Kong is China’s special administrative region; it is not what it used to be under British colonial rule,” Liu told reporters in English.

Johnson told Reuters on Wednesday that he backed the people of Hong Kong “every inch of the way” and cautioned China that the “one country, two systems” principle under which the territory has been governed since being handed back to China by Britain in 1997 should not be cast aside.

A senior U.S. official told the Commerce Department’s enforcement staff this week that China’s Huawei should still be treated as blacklisted, days after U.S. President Donald Trump sowed confusion with a vow to ease a ban on sales to the firm.

Trump surprised markets on Saturday by promising Chinese President Xi Jinping on the sidelines of the G20 summit in Japan that he would allow U.S. companies to sell products to Huawei Technologies Co Ltd.

In May, the company was added to the so-called Entity List, which bans American firms from selling to it without special permission, as punishment for actions against U.S. national security interests.

The following is courtesy @Themarketear

We are raising our 2Q19 estimates (and full year 2019 slightly on flow-through) to reflect better than expected 2Q deliveries, but only maintain our 2020 estimates and December 2019 price target of $200 (and underperform)

The magnitude of 2Q loss and amount of FCF generated in the quarter will now be key to watch, particularly as we estimate the firm may have undertaken premium costs to meet delivery targets. The debate will also likely turn to sustainability of demand given that 2Q was, like 4Q18, a pre-buy quarter in the US ahead of another step-down in availability of federal tax credits on July 1.

My bread and butter is to swing trade after a pullback to support or key moving averages. ADSK is a name I play frequently and has again served me well with my entry from June 27th.  I took a little heat on June 28th, but I stuck with the trade.  It has since rallied about $8 from my entry and my August monthly calls are up 62% as of close today. It’s going to run in to the upper bollinger bands on the daily, but I am looking at the weekly and room it has to move higher in price as well as the expanding bollinger bands. I am anticipating a pullback to at least 170.50 and possibly back to support at 169. No earnings until August 22nd so I will be leaving this trade in place for now. 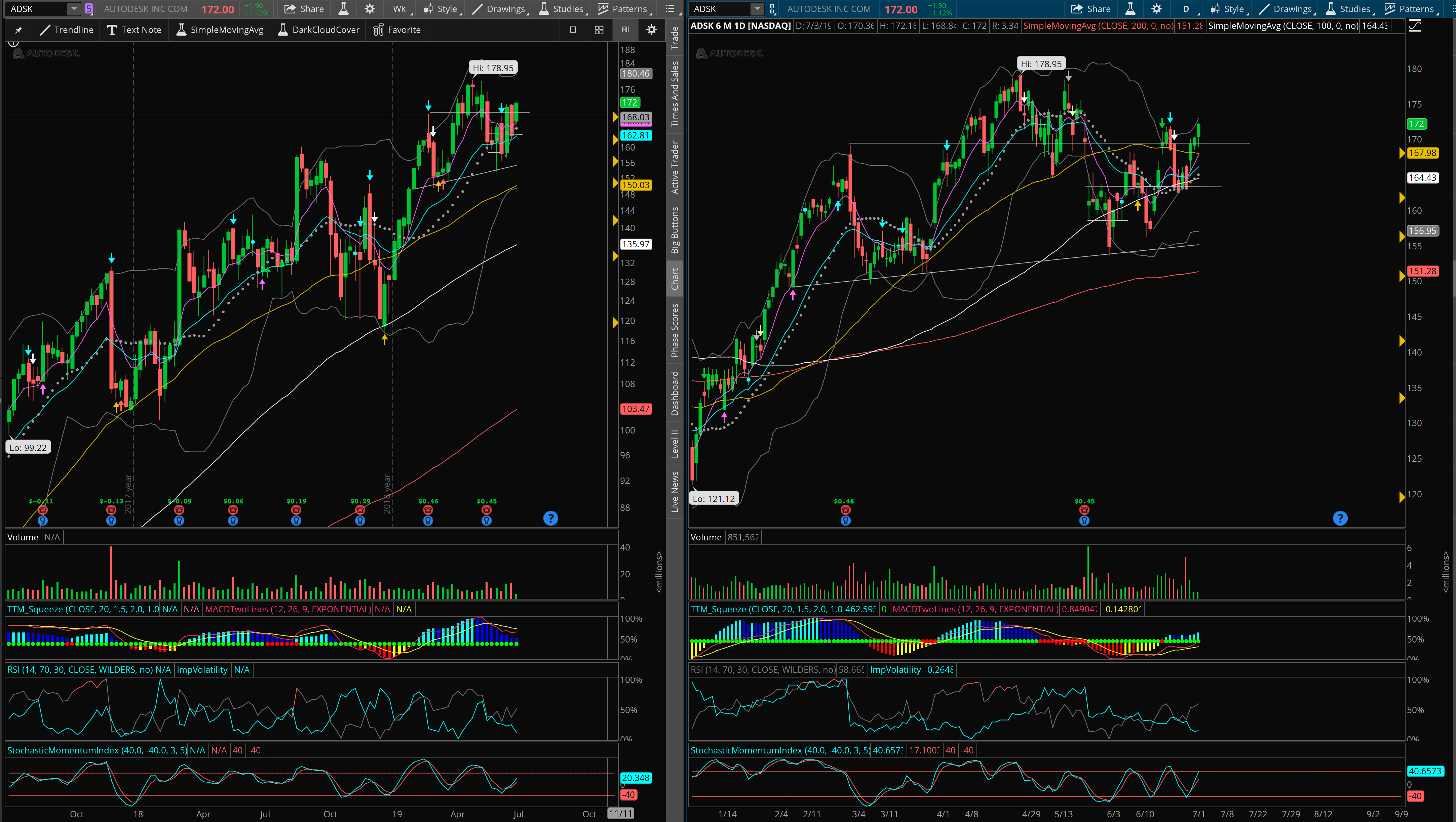 Not cool: An electrical engineer faces up to 219 years in federal prison after being found guilty of conspiring to smuggle military-grade semiconductor chips to China.

On the flip side – Love is ageless: 100 and 102-year-old couple get married in Lucas County, “We fell in love with each other”