On Jan 22nd I wrote, “CoronaVirus will be the story of 2020″ and then proceeded to write, tweet, talk about Coronavirus heavily in January, February and March. To be honest, I obsessed about it, warned about it, and from this was able to time the market crash with precision because of it. Now here we are –  just six months later – and COVID cases have topped 13.7 million globally with deaths near 588,000 and, yet, indices are less than 5% from all-time-highs.

I’m not ignoring COVID anymore than I am ignoring the massive liquidity infusion of monetary and fiscal support that kept the markets from staying crashed. But I am trying not to focus on either of them unhealthily. Now, it’s more a game of Gaming Covid. Back in March I said: “We need to learn to live with it“, as I did not expect a vaccine any time soon. I still firmly believe this, but I also don’t see the headline risk to anyone but bears – think: MRNA and the market levitation caused by the hopium belief in a vaccine to cure Covid.

With news on $MRNA results (just 45 patients btw; phase 3 study in 30,000 patients starts July 27) – I thought it a helpful reminder that there are more than 120 candidate SARS-CoV-2 vaccines in development within the first 5 months of 2020. Sentiment-driven market indeed.

More structurally, the Fed and Treasury and Central Banks the world over stepped on COVID’s neck – while Politicians and general Public over or under reacted to it. Yes, my mantra of “Life Preservation Meets Capital Preservation” is still on my mind, but the fact is that the market recovery off the March lows (and current market sentiment that stocks only go up) has very little to do with the very real negative health, wealth and societal impact of COVID on the U.S. and its economy and people. It’s clear that market participants feel the Fed-infused liquidity, international cash swaps and corporate bond buying has once again instilled a false sense of complacency for institutional funds (passive and quant make up 60% AUM after all), not to mention the new retail trading account holders who are helping to fuel liquidity in a chase of stocks higher: 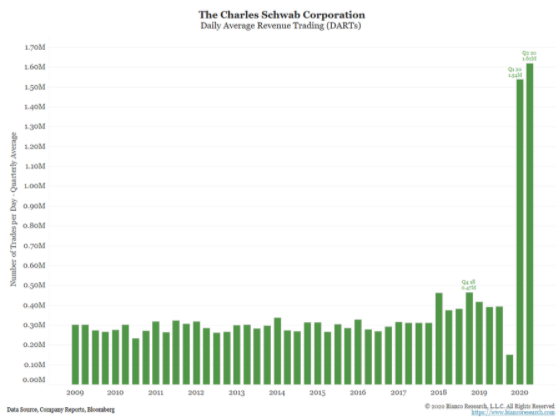 Now I am looking at “new” tail risk: The Three Gorges Dam in China, the US South China Sea escalation, the potential that Trump cancels the 2020 election and civil war erupts.

Yes, I did say back in JANUARY, that Coronavirus would be “THE story of 2020“, long before it was a news story on 24×7 repeat. I still feel “we” (main street not wall street) have NOT fully felt its grip on life, liberty and pursuit of profits. But I haven’t seen the signs, yet, to call an audible short, yet. I used the phrase, “Where Life Preservation Meets Capital Preservation” March 10th after I realized the the sell-off Febrary 21st was not a correction but a crisis. I spied the sell-off and said as such Tuesday the 18th of February and then kept clients not only safe but firmly pressing shorts all the way to the lows of March 20th (Friday) before Fed and Treasury came out that Monday the 23rd of March with massive disaster relief intervention, followed by Congressional measures deemed “stimulus”. I simply don’t see a set-up like that now. And trust me, I look every day.

Growth At Any Means

I made one key mistake back in Feb/March: thinking COVID would be more powerful than Fed printing. I fully expected a rubber-band type rally, but not a “full” market recovery. I had forgotten the mantra “Growth At Any Means” was not just an investing philosophy the past decade, but was in total alignment with the ‘New Gig Economy‘, Work-From-Home, Private-Equity and Passive-Investment perversion. I actually thought we would get turned back down below ~$2950 SPX. We have not and now we are testing a potential breakout of $3250.

There are many reasons why we can head higher – detailed Wednesday for clients: The Upside Catalyst for Equity Market’s Advance. But the main one: the worsening COVID-19 pandemic and economic outlook will likely be met with more monetary and fiscal stimulus – here and everywhere, now and for the foreseeable future.

And with that, the Deficit Myth will be tested…

“The amount of liquidity or money creation so far is similar to the magnitude of M2 creation during the financial crisis of 2008/2009, but has occurred much more quickly, in only a few months, as policy makers responded more aggressively to the impact of the pandemic. But given that debt creation and QE will continue to be stronger than normal until 2021, we believe that the total money or liquidity creation could exceed $15tr or more globally by the middle of 2021” JPM

This game of gaming COVID impact on the stock market is simply not one worth playing for the time being – except as a narrative to support a rotation theme from the Internet of Things that drives speculation to the economically-sensitive plays that are priced for a recession but may be positively reviewed for their modest valuation and earnings boosts this upcoming earnings season. We. Shall. See.

For now, the Fed is in cohoots with Treasury and together they have done an impressive job of keeping market participants outright hammering the Buy Button. From their full monetary arsenal of bazookas to their continued market suppression of interest rates (despite its damaging effect on Main Street), the Fed is solely responsible for our market advance. They are ‘credited’ with:

With Fed engaging in an “emergency lending program” buying corporate debt, they are showing markets the unprecedented measures they will undertake to support flow of credit in the economy.
Why did markets rise last few few weeks?

The Federal Reserve fired up its facility to directly purchase corporate bonds from the companies themselves, rounding out its bond-buying program as the central bank continues to combat the economic fallout from the COVID-19 crisis. Yahoo Finance

How much more are they willing to spend?

As of June 24, the Fed’s purchases had only totaled $8.7 billion, a drop in the bucket when considering the Fed could lever its purchasing power to take on as much as $750 billion in assets. Yahoo Finance

Beginning June 16, the Fed also began purchasing individual corporate bonds in the secondary market. Its first round of disclosed purchases included about $429 million in bonds including holdings of debt from Abbvie, AT&T, and UnitedHealth Group.

NEW: The Fed has posted the 794 companies whose bonds it began purchasing earlier this month as part of its "broad market index"

The Fed bought $398 million in individual corporate bonds over the first two days of its custom index approach to purchases this month, including UnitedHealth, AT&T, Comcast and Coca-Cola. WSJ

Debt from AT&T and other corp giants saw biggest purchases: #Fed unveiled further details of an emergency lending program buying corp debt, showing which US businesses have benefited from its unprecedented measures to support flow of credit in the economy. https://t.co/Wy5r4ehkmd pic.twitter.com/no2F3EuXjK

They have approved $750 billion to purchase these bonds.

How does the Fed buying corporate bonds benefit the average American?
It doesn’t.
Powell, who build his wealth as a Private Equity dealer before he became Fed Chair, is now supporting the largest Private Equity companies of Blackrock and Apollo while buying debt of companies that don’t need their debt purchased – like AAPL. All the while these large companies get Fed money, America’s small businesses vanish in plain sight.

And weekly bankruptcies have accelerated to their highest level since May 2009.

Roughly 140,000 Yelp-listed businesses that had closed since March 1 remained closed on June 15. That’s 41% that has shut for good and 53% of closed restaurants saying they won’t reopen, according to YELP. 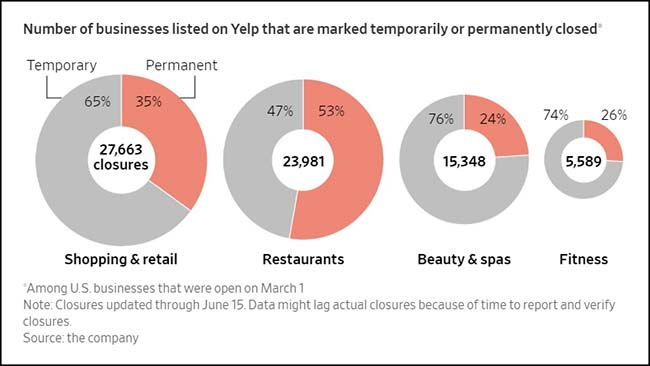 NPC International Inc., one of the largest restaurant franchisees in US preparing to file for bankruptcy protection despite brands reporting a bump in sales…owner of more than 1,200 Pizza Hut restaurants & 385 Wendy’s Co. stores could file for Ch 11 as soon as Tuesday @DowJones

“I still believe we are witnessing real tragedies in the small and medium businesses. What’s remarkable is there are more human beings being affected by the disease today than on March 21 when markets were 40% lower” BlackRock ($BLK) CEO Larry Fink via @TheTranscript_

The number of people who failed to pay their mortgage last month rose to its highest level since 2011, which numbered 4.3 million homeowners. CNN

And why is that?

We are 14.6 million jobs below where we were before COVID.

Cycle peak in US permanent job losers vs. US equities (S&P 500). pic.twitter.com/04zFOhDWEE

Without small businesses, and permanent jobs, and with that the consumer having money to spend, no question Global Trade will suffer. 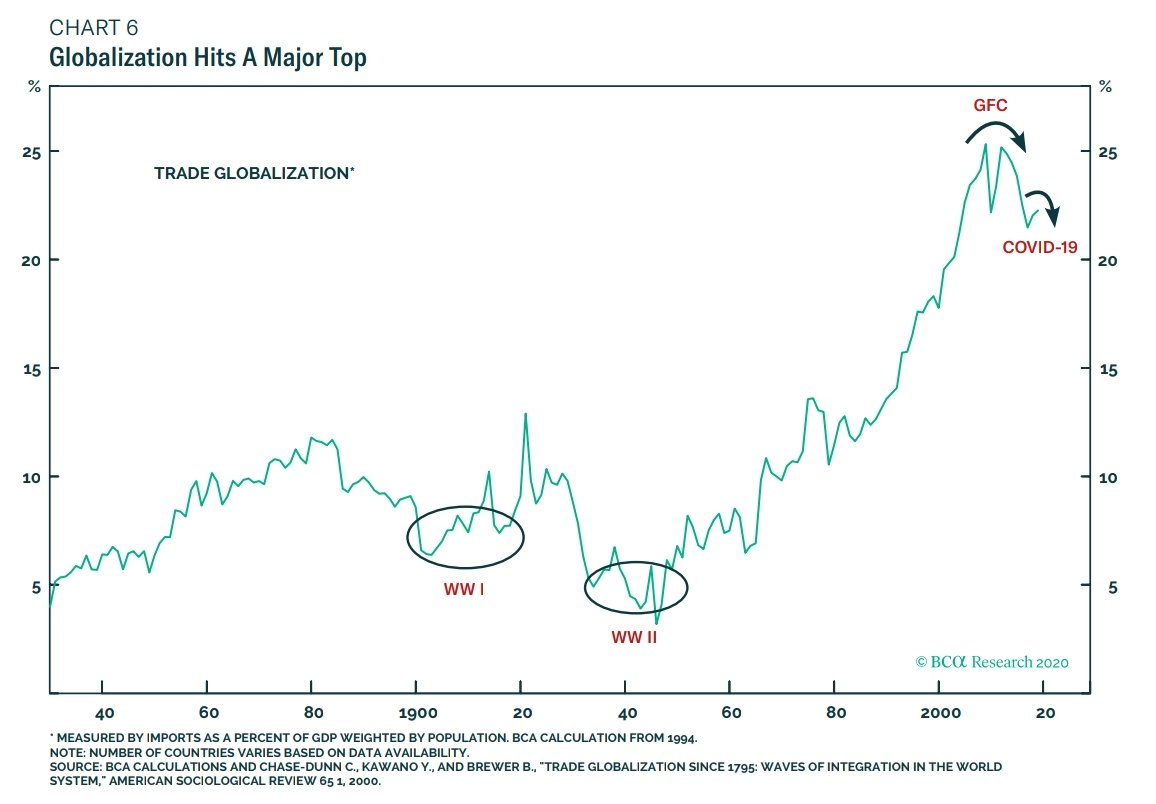 The Stock Market Is Not The Economy

“[I]f we are going to use monetary policy to ease periods of economic turmoil, it would be better for the Fed to just print money and distribute it to households instead of lowering rates and encouraging everyone to lever up.” @SheilaBair2013

But putting money directly into the hands of those who need it most doesn’t benefit large corporations, and so the Fed/Treasury/Trump/Congress manipulation continues along with the real wealth/income/gender/race gap widening.

No, it doesn’t make any sense for a country’s leadership to socialize private company losses at a time when civil unrest is at a multi-decade high from the very real economic hardships caused by these same leaders. The financial and psychological damage on Main Street is ignored by Fed policies, Treasury printing, Trump propaganda and Congresses inaction. In simplest terms: Wall Street is not Main Street. Returns are mandatory, whether from Trump desperately trying to hold on to power, or pension funds desperately trying to comply with investment mandates. It’s frustrating, but market participants know we have a coordinated political, monetary and legislative leadership complicit in fabricating both money and motivation to keep markets bid. Until they don’t.