Market Thoughts: Livin’ On A Prayer

As we close the first half of 2019 today, it’s fun to reflect that we are ‘half way there”. Not just for the year but also it seems with the US-China Trade War. Color me skeptical, but this fight has been going on for over a year now, by some accounts, even longer. And I contend it will be “a thing” up until the 2020 Election if not later – so at least another year of the headline drama and disappointing growth. Sorry, but to think otherwise, I’m just livin’ on a prayer.

So when did this self-imposed US conflict officially begin? This battle that Trump took up to ‘level the playing field’? Would it surprise you to know that the China Briefing has kept a timeline?

Events leading up to the US-China trade war

Of course, this is just the first few entries by the Chinese newspaper; there is a long list you can check out, but what I found interesting was how they placed the first timestamped entry of a warring Trump long before he was even elected. Fast-forward from 2011 to 2017, and I would contend ‘first shots were fired” when Trump authorized “investigation” into Steel Tariffs. 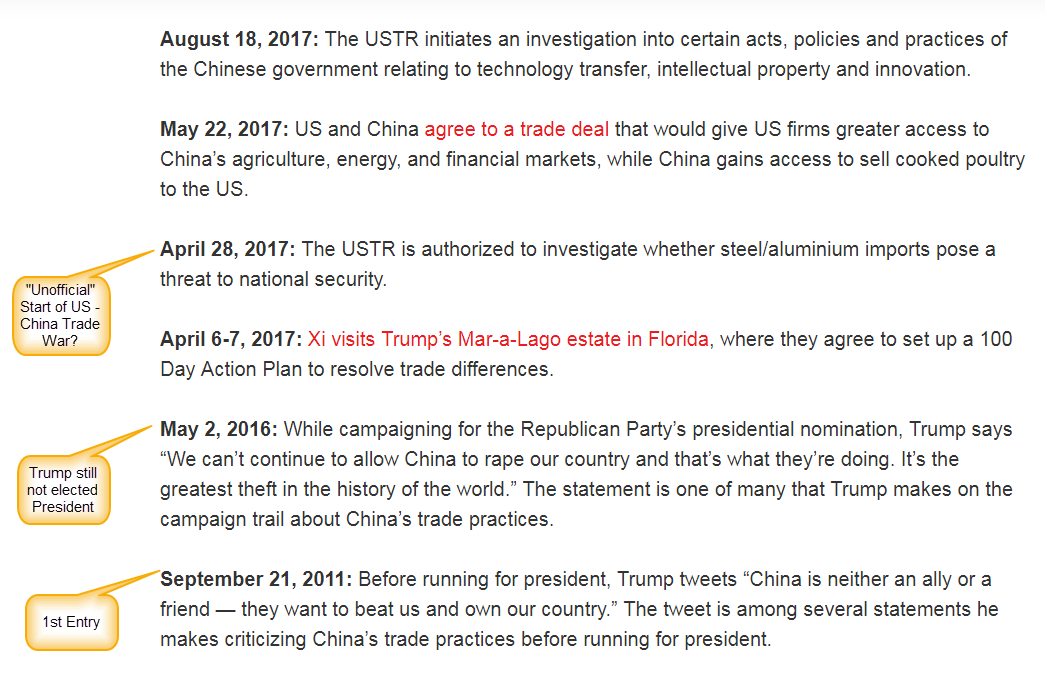 A more official day for the trade conflict was the implementation of those tariffs on Chinese imports.

US: The US Customs and Border Protection (CBP) begins collecting a 25 percent tariff on 818 imported Chinese products (List 1) valued at US$34 billion – giving effect to the first round of tariffs, which were revised and announced on June 15, 2018.

And here we are, 358 Days in and what else is there to say: “You live for the fight when it’s all that you’ve got”, Bon Jovi.

G20 is expected – by the markets not me – to produce the resolution to the Trump – Xi differences. Market have already priced it in! The S&P 500 is up almost 17% and the Dow had it’s best H1 in close to 81 years.

Despite earnings weakness, stocks have fared well this half of the year – despite tariffs, despite Iran, despite Brexit and despite the Fed. What stocks haven’t done is fall despite  the weak consumer-confidence, despite weak new home sales, despite weak earnings growth. So I caution not to get too carried away with sentiment-driven stock market prices.

There’s a direct relationship between short-term interest rates and stock valuations. So we’ve seen share prices rise as earnings have flatlined. But at the same time, short-term rates are expected to fall soon. In other words, the valuations can mask the weakness in the market. Eddy Elfenbein

Next week, besides the outcome of the G20 meeting and Trump – Xi meetings, we have some economic reports to help size up market strength or weakness: ISM Manufacturing Index will come out on Monday, ADP payroll  Wednesday and NFP jobs report Friday.

The US and China have agreed to a tentative truce in the lead up to their resumed trade talks in Osaka this weekend. Details of the agreement are being drawn up and are expected to be released prior to the meeting. The US has threatened 25 percent tariffs on a further US$300 billion of Chinese imports, which is expected to be halted. Sources quoted by the media suggest that Trump might propose a deadline of six months for the talks to reach an agreement. If this does culminate, it would mean the US would hold off on implementing further tariffs until the end of the year.

And if Trump instead decides he is not happy this weekend and follows through with his threat of implementing the extra 25% tariffs, we will be signing a different tune:

“Take my hand, we’ll make it I swear
Woah, livin’ on a prayer”

Humor Me: With the coming debt ceiling and potential federal government shutdown in the Fall, I am not surprised to see slowing Gov Spending. The Treasury Shortage has also most likely contributed to an inverted curve (Lower FFR; excess bank reserves depressing interbank rates) so it’s not a surprise to see Gold rally hard, but watch for when Treasuries are again available. We will see the opposite: rates rise and Gold falls.

Speaking of treasuries: that Treasury Volatility Move has been out-sized, but all the more reason the reversion back to VIX Volatility will be as out-sized… 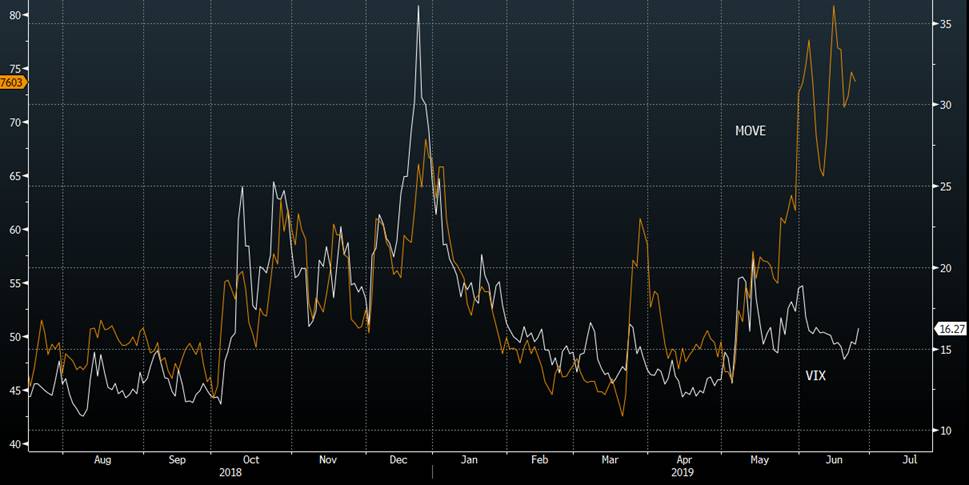 The 9.8-pt drop in confidence was one of the largest monthly declines for the Conference Board index of the expansion, and it brought the level of confidence down towards the low end of the range reported over the past couple of years. 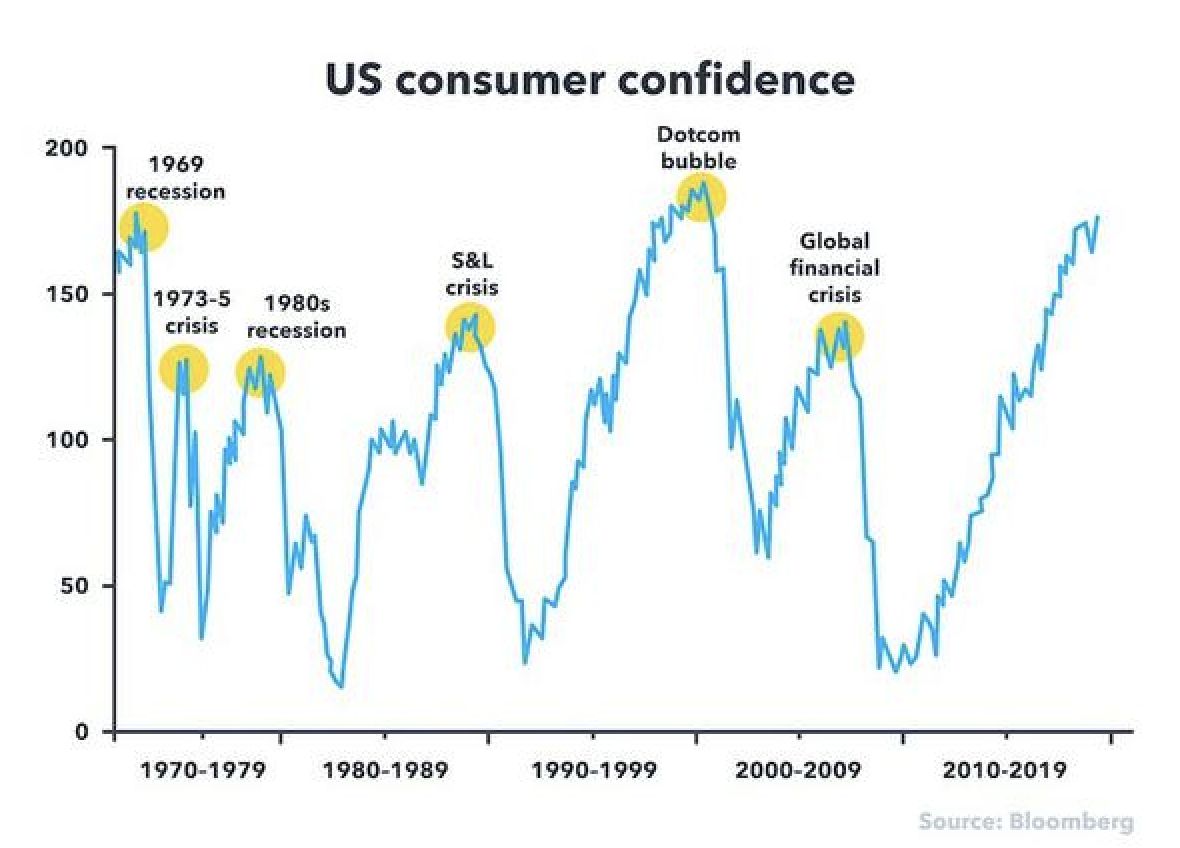 Consumer spending rose at a healthy clip in May for the third month in a row, suggesting the U.S. economy is still on solid ground even as growth has waned. Consumer spending increased 0.4% last month, the government said Friday.

Core Inflation: Inflationary pressures remained quite low in May. Although prices rose slightly, the pace of inflation over the past 12 months tapered off to 1.5% from 1.6% using the Federal Reserve’s favorite PCE price gauge. That’s well below the Fed’s 2% target.

Chicago PMI: A measure of business conditions in the Chicago region fell in June into contraction territory for the first time since January 2017. The Chicago PMI business barometer declined to 49.7 in June from 54.2 in May, MNI Indicators said Friday. Any reading below 50 indicates contracting conditions. The index had been as high as 64.7 just four months ago. 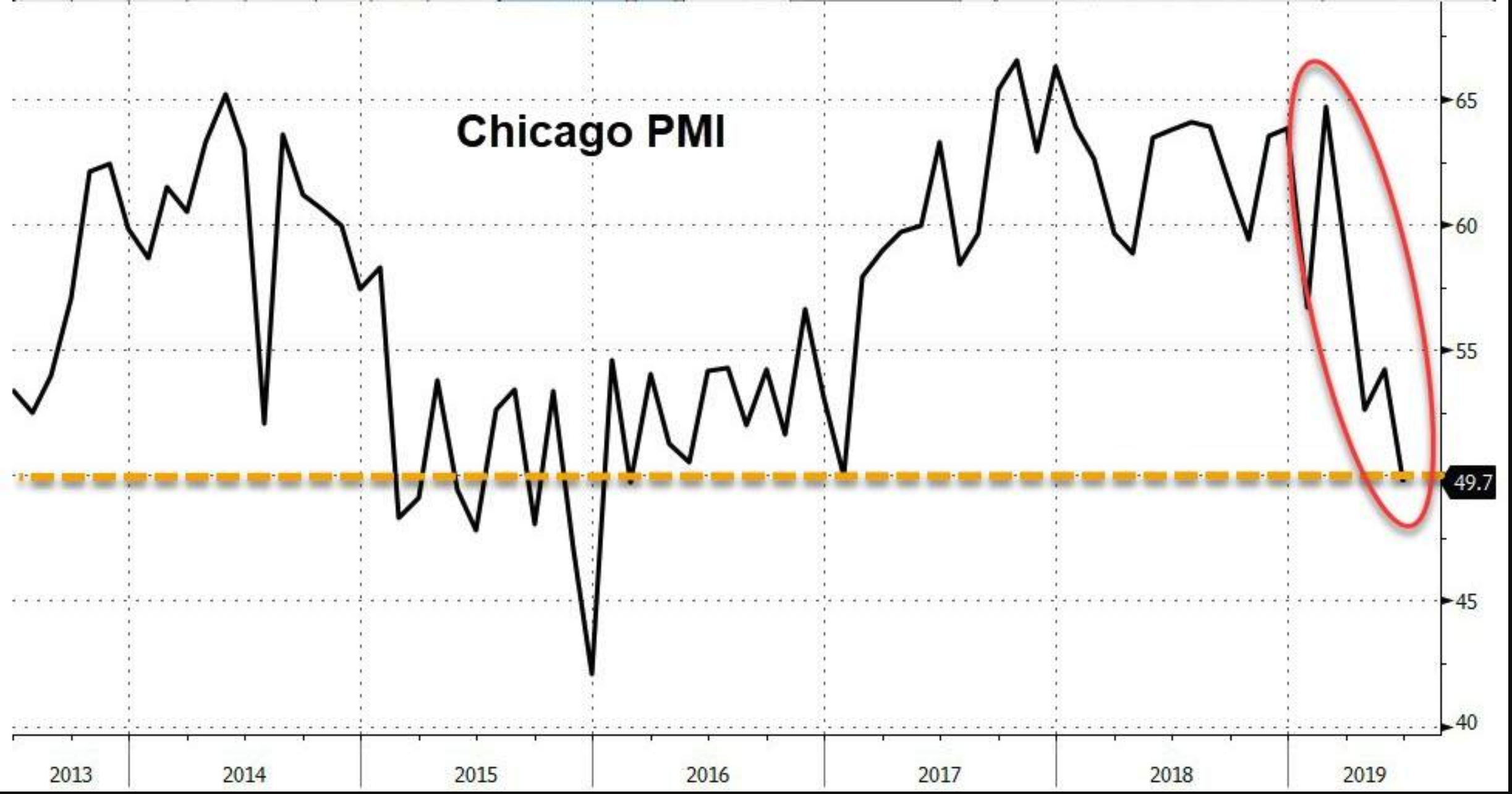 We’ve been watching XLB since June 23rd in the StockTwits room and today was the day it finally broke above that resistance today. 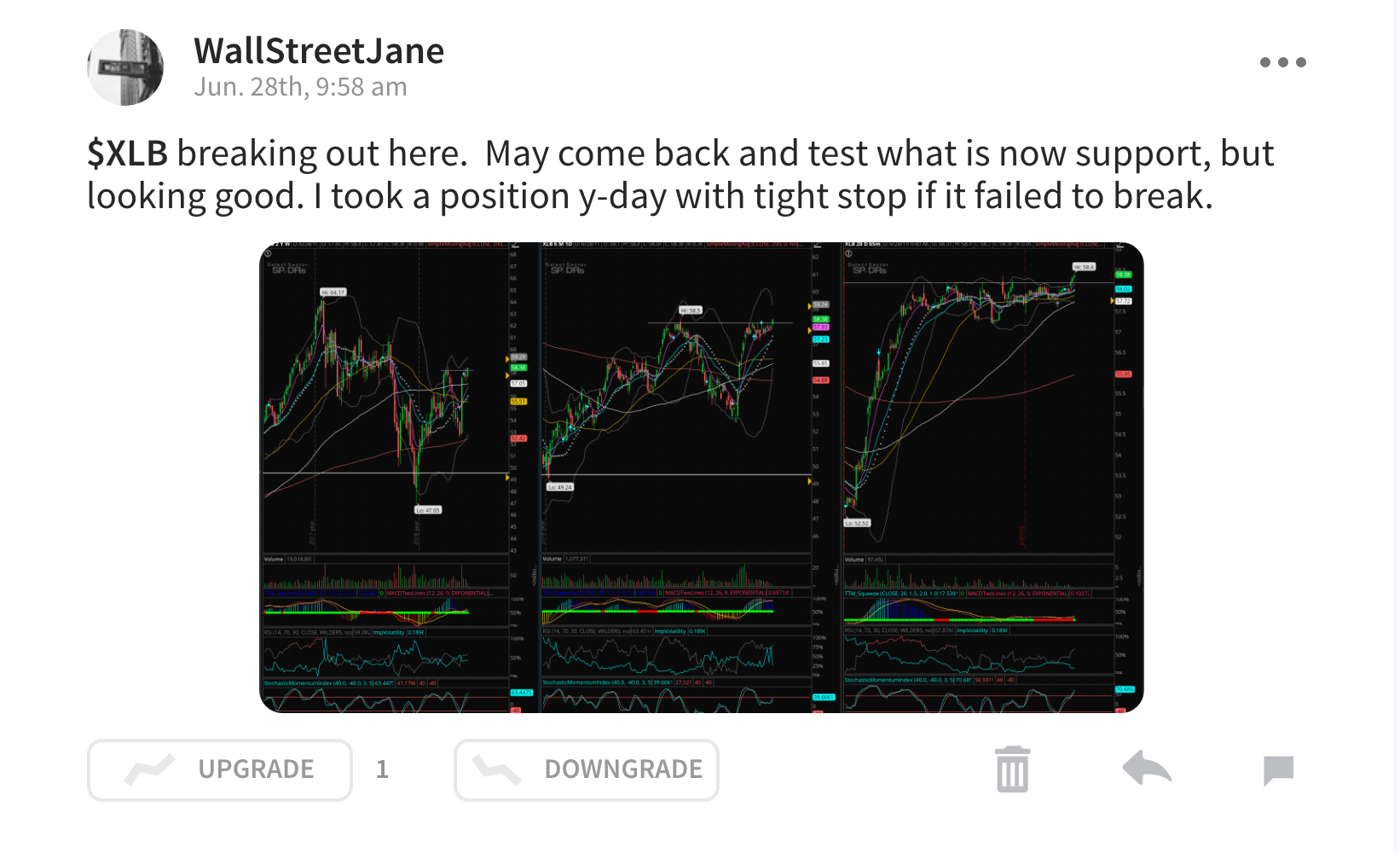 It didn’t pullback much and finished near the high of the day. My August monthly calls are up 17% as of close. 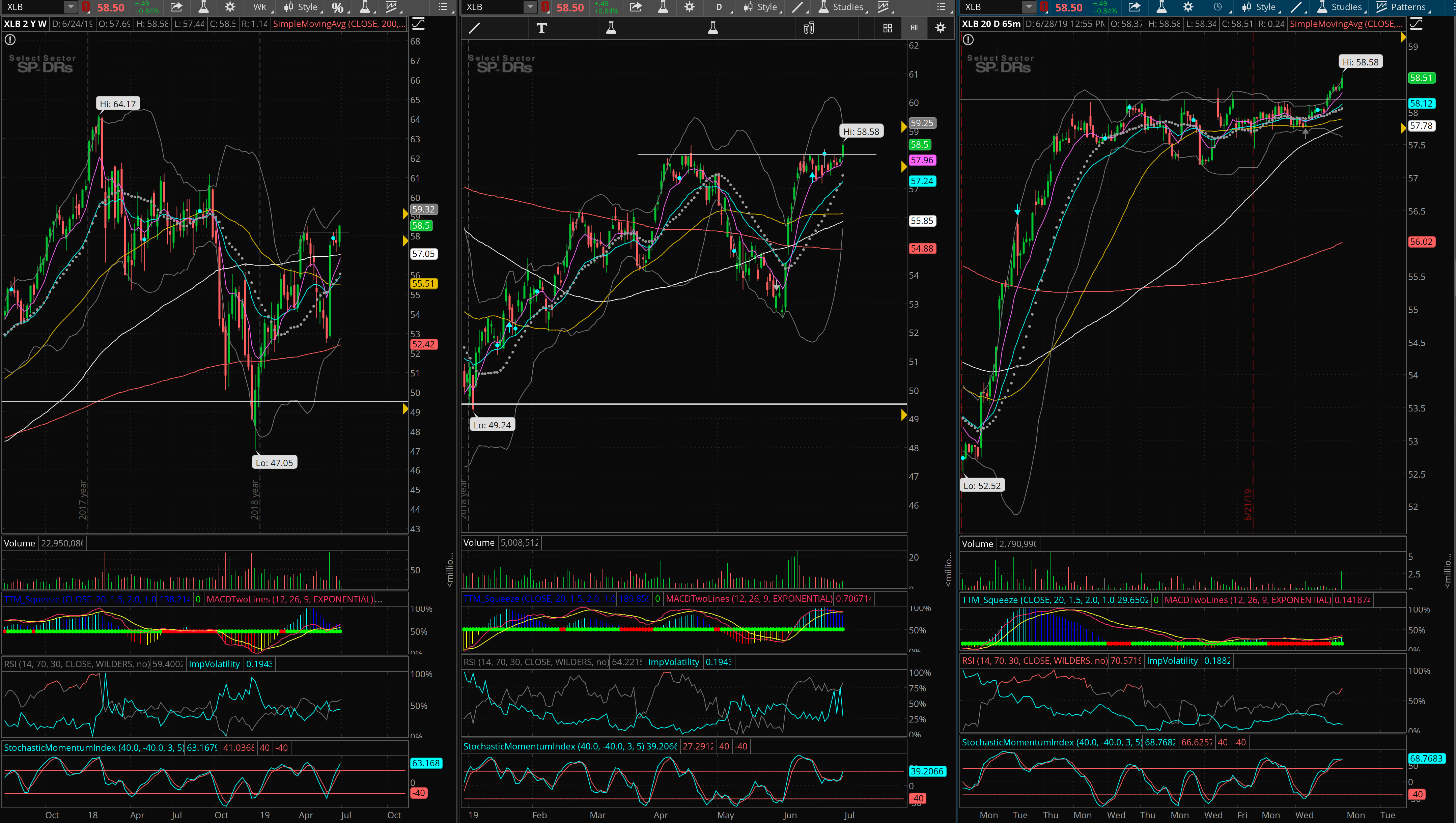 On the flip side, I took a long position in AAPL on June 26th and I was clearly trying to will it higher today. 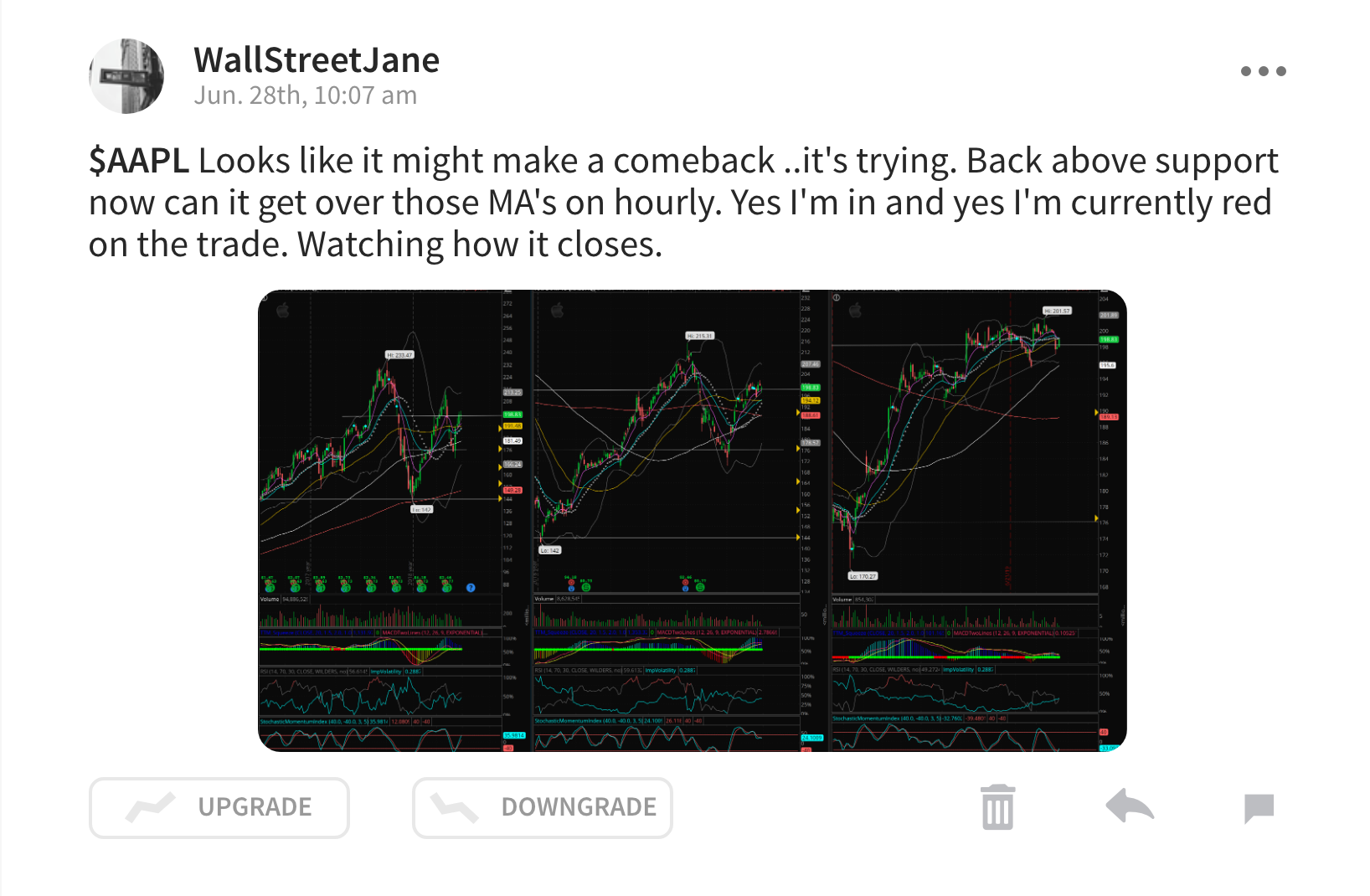 Not a great close, but I continue to hold my August monthly calls.  I’m currently down 17% on my options. 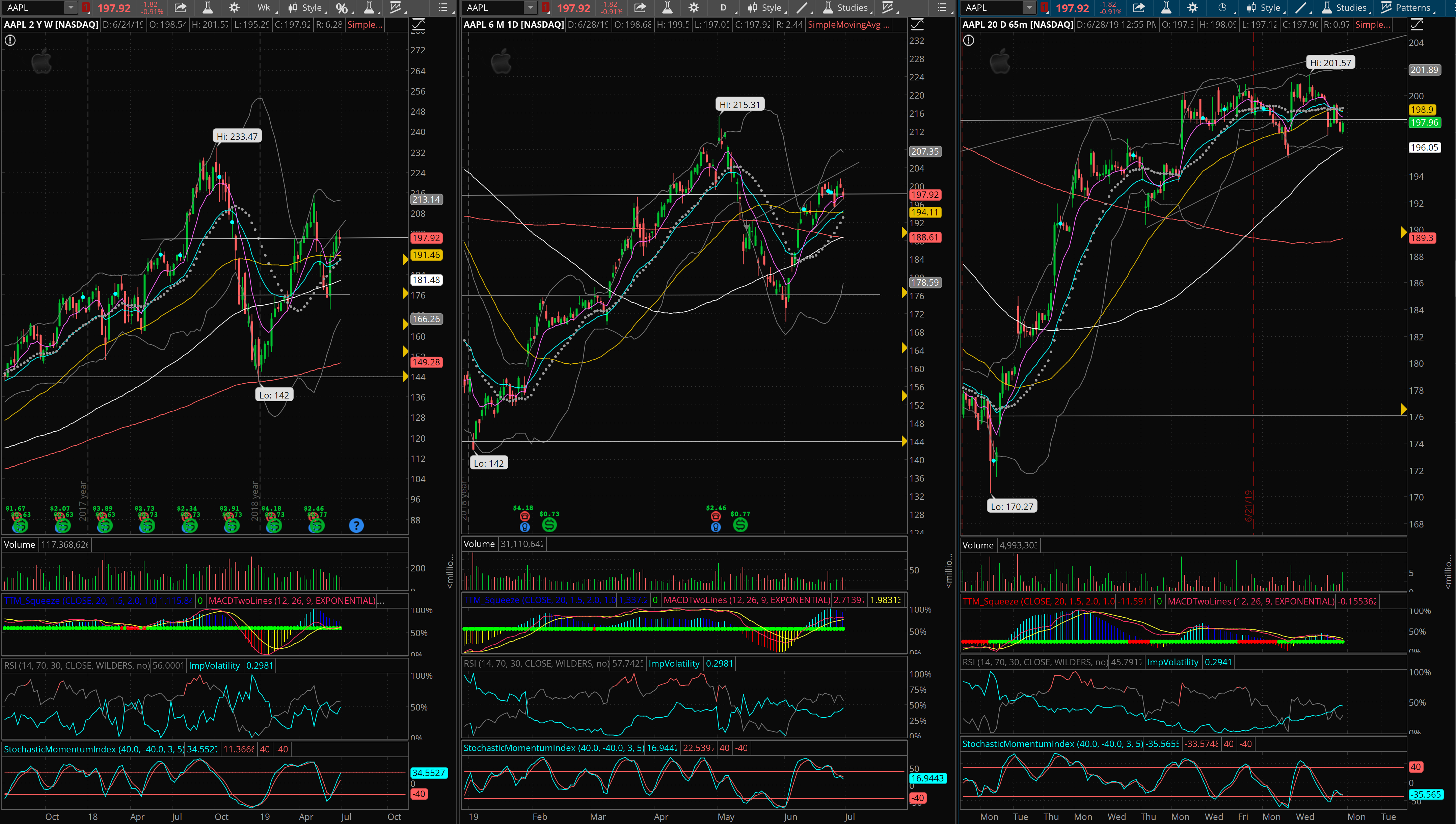 AAPL: After hours last night Apple announced its long-time design guru, Jory Ive, was departing the company to start his own firm.  The stock took an initial hit, but it was then disclosed that AAPL will be a client at his new firm. This departure had been in the works for some time so the initial shock wore off fairly quickly. Here is a nice piece about his long tenure at Apple and relationship with Steve Jobs: The Jony Ive Obsessions That Built Apple

The great outdoors and important trails like the Pacific Coast Trail do require maintenance and the effort these men are willing to contribute is inspiring, to say the least: The Retiree ‘Trail Gorillas’ Who Keep the PCT Clean