Market Thoughts: If You Give A Mouse A Cookie

If you give a mouse a cookie is a children’s book that came immediately to mind when reading the constant debate about the slippery slope of ‘allowing’ markets to influence the Fed’s monetary policies. 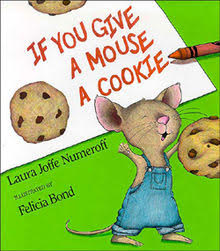 The plot goes like this:
A boy gives a cookie to a mouse. The mouse asks for a glass of milk. He then requests a straw (to drink the milk), a mirror (to avoid a milk mustache), nail scissors (to trim his hair in the mirror), and a broom (to sweep up his hair trimmings). Next he wants to take a nap, have a story read to him, draw a picture, and hang the drawing on the refrigerator. Looking at the refrigerator makes him thirsty, so the mouse asks for a glass of milk. The circle is complete when he wants a cookie to go with it.

See what I mean?

Markets may have a reason to be a little excited about the prospects of rate cuts. Ryan Detrick ran the numbers and found that since 1980, the Fed has cut rates 17 times when the S&P 500 was within 2% of a new high. One year later, the market was higher all 17 times.

A BIG part of me wants to take the ‘under’ here and will be watching for any signs to do so.

Here’s One: “Demand for Treasuries”

There was a 30 year bond auction today that tanked the bond market by more than a full point, which helped Financials move higher. However, is this the first sign the bond market can no longer absorb new debt:

Those Poor U.S. Bond Auctions Are Adding Up

Bonds Suggest a Ceiling for the Stock Market is a theme I completely support:

“Since equities made what was then an all-time high in January 2018, performance of the stock market has largely tracked the movement of investment-grade corporate bond yields.” ⁦@conorsen⁩

And Here’s Another: China Hurting Can Cause a World of Hurt

Remember when US Investors feared China’s soft/hard landing?
China is grappling with a slowdown that will see output growth slide to the weakest pace in almost three decades

U.S. RAIL FREIGHT was down -3.2% in the first six months of 2019 compared with the same period in 2018, according to figures from the Association of American Railroads: 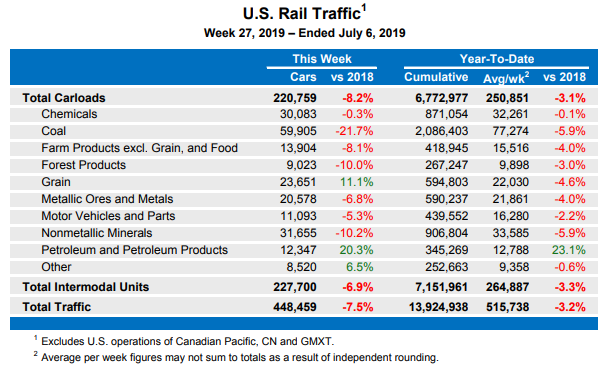 The U.S. budget deficit widened by 23% to $747.1 billion in the first nine months of the fiscal year, as rising spending eclipsed a small bump in revenue from the Trump administration’s tariffs.

Federal expenditures increased to $3.36 trillion in the period from October to June, up 6.6% from a year earlier, the Treasury Department said on Thursday. Revenue rose by 2.7% to $2.61 trillion. 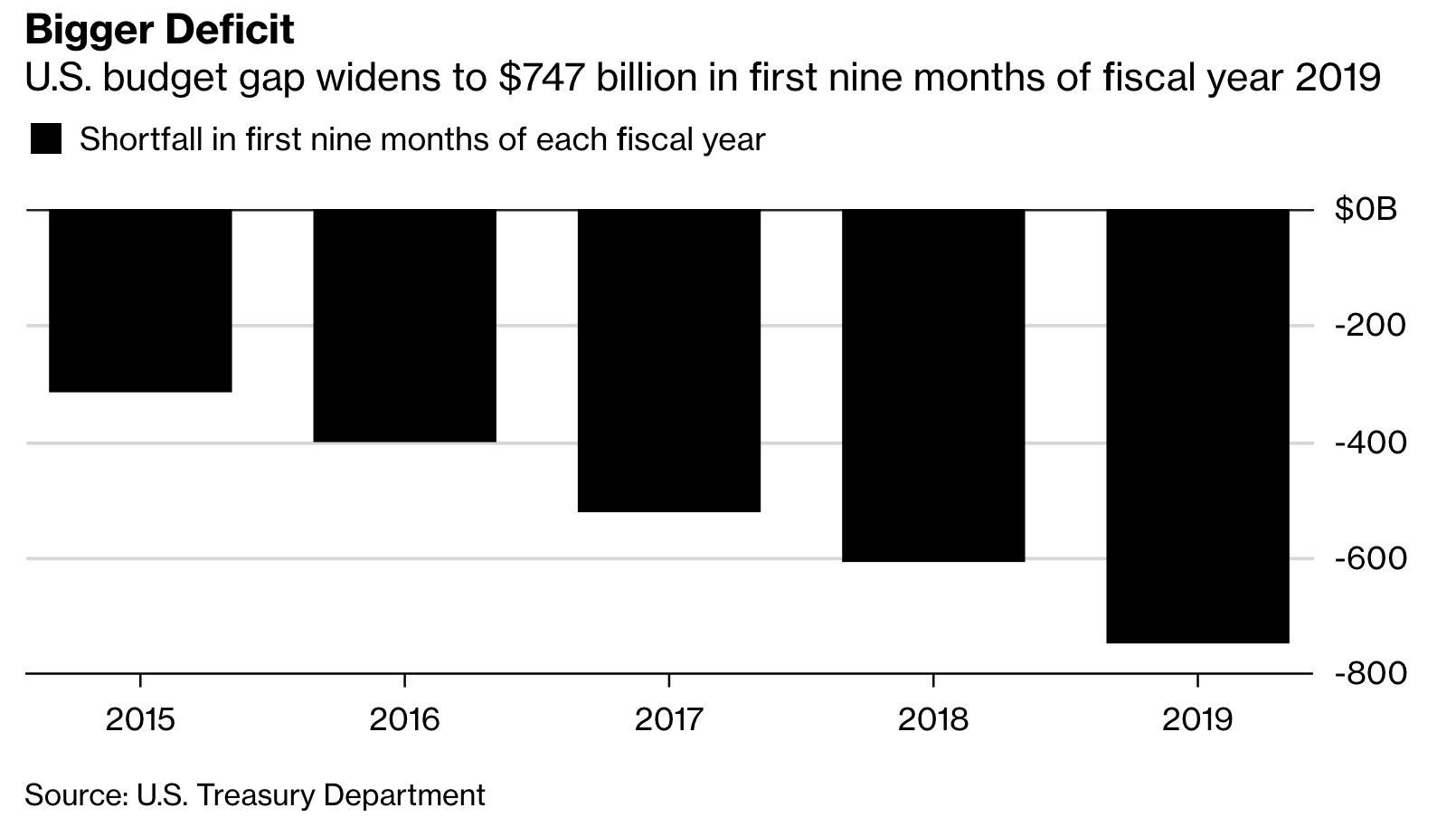 The number of people who applied for unemployment benefits last week fell to the lowest level in more than three months, a decline likely exaggerated by July 4 holiday but that still reflects the strongest labor market in decades. 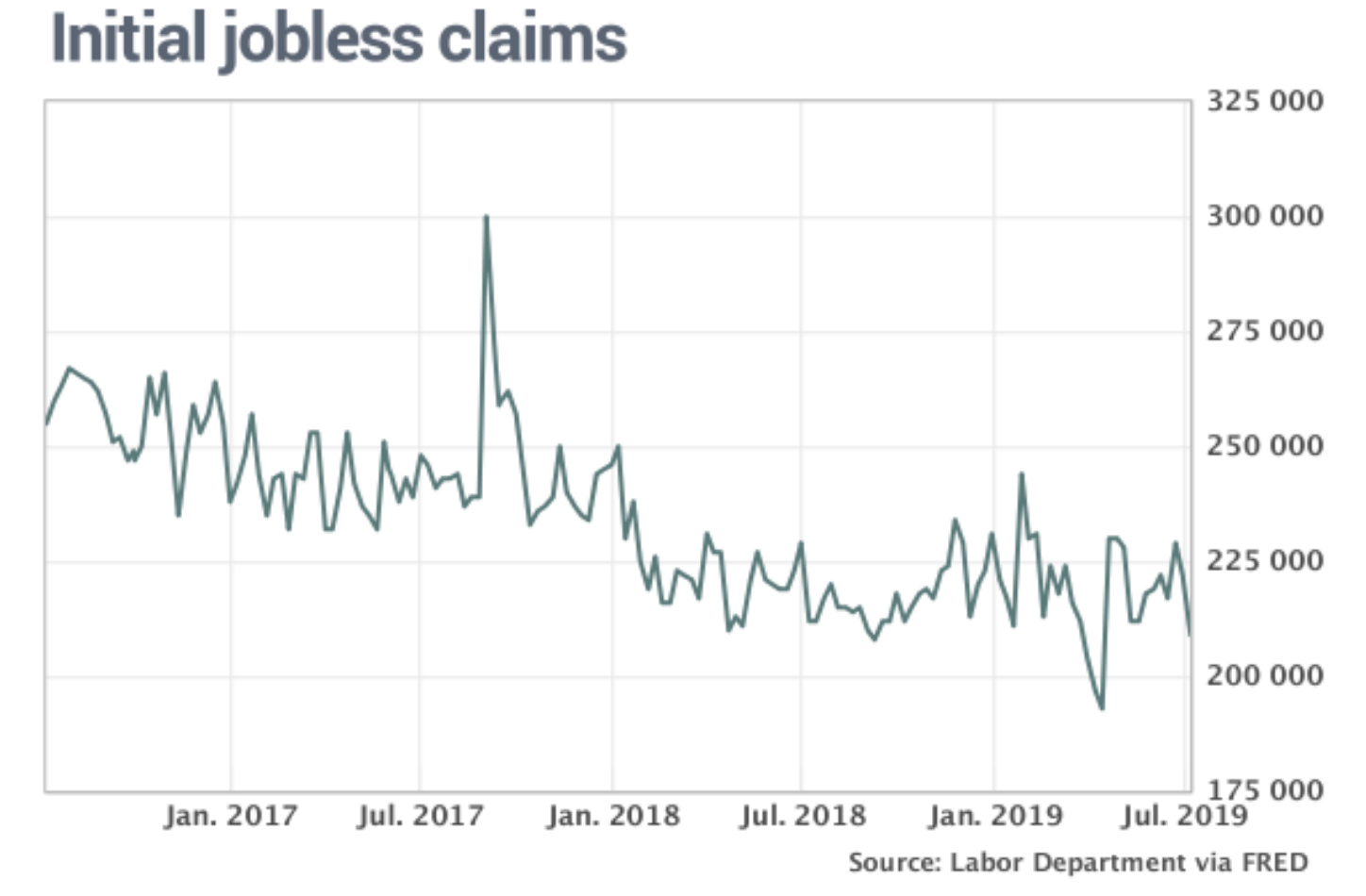 The consumer price index rose 0.1% in June. Americans paid more for rent, clothes and autos in June, but consumer inflation was largely held in check by falling energy prices. Waning inflation is one of the chief reasons the Federal Reserve is likely to cut interest rates by the end of the month. The increase in the cost of living over the past 12 months slipped to four-month low 1.6% from 1.8%.

Another closely watched measure of inflation, however, was not as tame. The so-called core rate that strips out food and energy jumped 0.3% last month, marking the biggest increase in a year and a half. Higher rents were a big contributor. 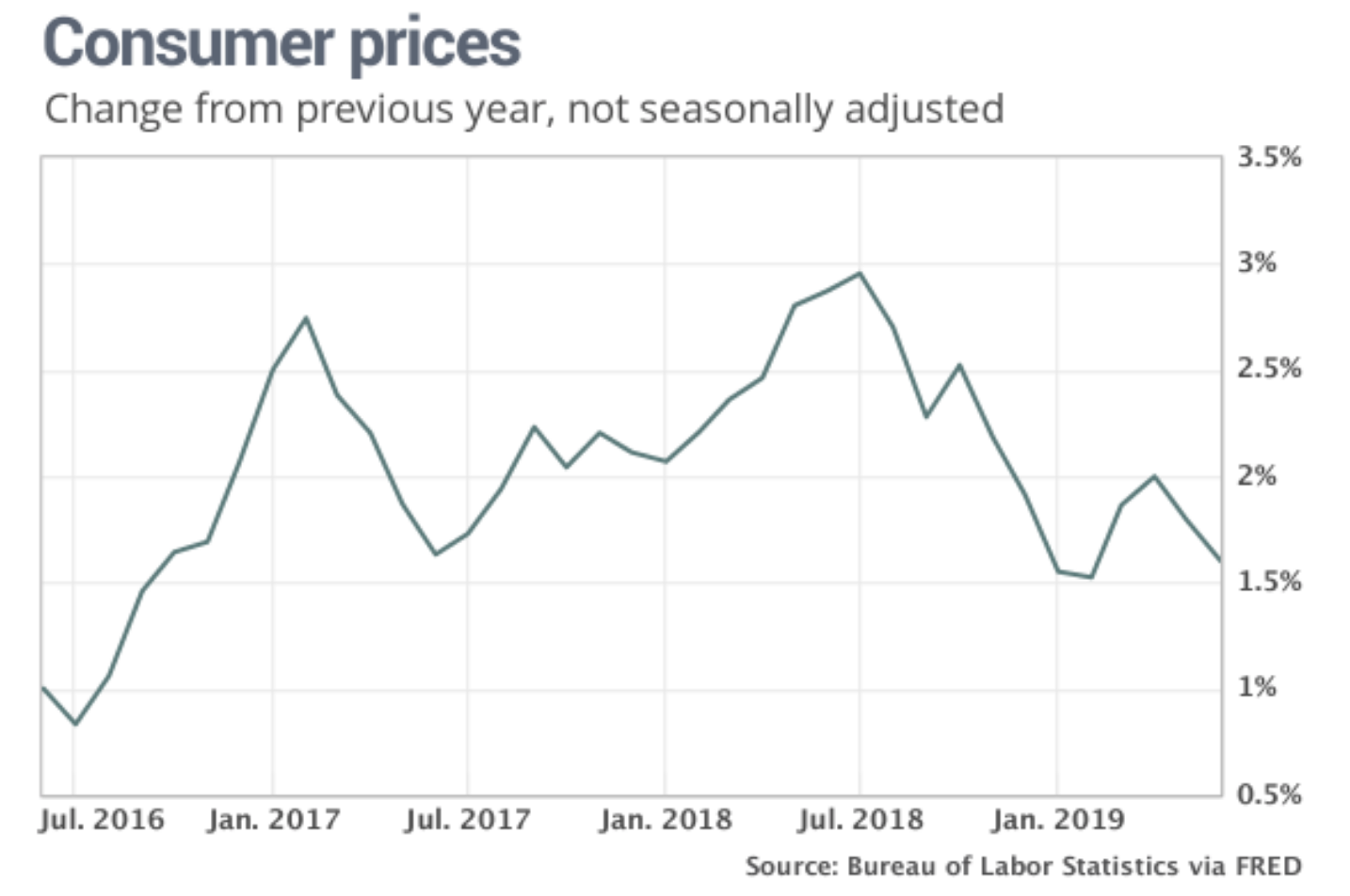 German Economy Minister Peter Altmaier on Thursday said he sees a 50-50 chance of averting U.S. auto tariffs, and that it will likely take weeks or months to resolve at least some of the thorny trade disputes clouding U.S.-European relations.

Altmaier told reporters he had a constructive meeting with U.S. Trade Representative Robert Lighthizer, and both sides agreed it was important to work out their differences over a range of issues, including aircraft subsidies, car imports and the Russian-led Nord Stream 2 gas pipeline.

“We agreed that we must work on a solution,” Altmaier said. “We may perhaps have a chance to come to solutions in the coming weeks, clearly before the end of the year.”

He said his top priorities were averting U.S. tariffs on European cars imported into the United States, and resolving a 15-year-old row over government subsidies to U.S. planemaker Boeing (BA) and Europe’s Airbus.

Iran Tensions Continue to Heat Up:

Three Iranian vessels tried to block a British-owned tanker passing through the strait that controls the flow of Middle East oil to the world, but backed off when confronted by a Royal Navy warship, Britain said on Thursday. A week after Britain seized an Iranian tanker accused of violating sanctions on Syria, London said the British Heritage, operated by oil company BP,  had been approached in the Strait of Hormuz between Iran and the Arabian peninsula.

How To Play The Recent Pop In Snap  – This was a post I sent to clients earlier in the week. @SeekingAlpha  published it this morning. $GS just upgraded it as well…

The inquiry aims to determine whether Deutsche Bank might have violated foreign-corruption or anti-money-laundering laws as it helped 1MDB raise $1.2 billion in 2014, the Wall Street Journal said in an earlier report Wednesday. Tim Leissner, another ex-Goldman executive who pleaded guilty last year for his role in the scandal, has been helping with the Deutsche Bank examination, the paper said, citing unidentified people with knowledge of the matter.

I came across this article today and thought I’d give some color from a first hand perspective when I worked on troubled debt. Wall Street banks bailing on troubled U.S. farm sector

The article covers all of the facts, but I want to add some color about why lenders are so abrupt to shift lending away from cyclical sectors like agriculture and energy. The reality is banks are for profit entities – always chasing yield and for the best return for shareholders. Everyone wants to think the bank, who lent the borrower money based on certain criteria being met, should then continue to lend and risk loan losses even though the borrower has defaulted on the agreed upon terms. The thing is, once that yield is no longer positive, just like when you have a losing trade, they just want to get the hell out. After all, who wants to bag hold a loser?

Here’s the rub; the bank looks at the numbers, but the borrower just wants some relief given the unfortunate circumstances. When we talk about agriculture, and energy, we are talking about industries that have notoriously difficult challenges – many of which are out of their control. The banks challenge is weighing not only the cash flow risks, but the collateral risks. If you’re lending to a farmer who grows onions you ask, what variety of onions are they? What do they bring per bushel? What is their liquidation value should a harvest occur but other circumstances require a less than orderly disposition of the commodity? What other hard assets can be pledged to secure the loan? Are they depreciating assets, like personal property that can grow legs and disappear? Or, is it real estate, such as the farmland and water rights, that provide a better collateral base should things go south? Neither the lender or borrower really want to talk about what will happen if everything goes to hell in the proverbial hand basket and that’s where I came in to the picture.

By the time I was talking to a borrower they were in enough trouble that the loan was costing the bank money to keep it on its books. Upon arrival on my desk I would complete an analysis to determine if we could restructure the debt and order reports to best determine what the collateral is worth at that time. I would then reach out to the borrower who was generally super unhappy with the situation – that the bank isn’t making accommodations to “help” them out now that times are tough. Honestly, trying to balance the analytical side while also recognizing why a borrower can’t distance themselves from the emotional aspect, was the most difficult part of the job. I come from a small business family so I understand the heart and soul put in to any business venture, which made it that much more difficult for me to keep the desire to accommodate in check. Many of these folks know no other profession than farming and now they’re staring down the barrel of losing their livelihood.

It’s all very harsh, yet necessary. Hear me out. It’s easy to feel like you’re getting “screwed” by the evil bankers when they’re telling you things you don’t want to hear, but what if you had a bumper crop year, netted $1M+ and the bank then asked for some of that profit since they lent you the funds to make that crop possible? You’re going to say, hell no, I paid you interest on the loan so you already made money off of me.  They’re right, but unless they pay off the loan (let’s assume it’s a line of credit), the bank will still be carrying the risk that the next crop is not so fruitful. Moreover, the interest collected may very well never add up to the loss incurred should a worst-case scenario play out. It’s that reality of our lending system – it’s all roses and sunshine when the money goes out, but a rainstorm when the clouds move in – that creates so much friction.

The only reason I bring all of this up is to point out that the banks will never “care” about your situation. They will do what’s best for the bank….period. Is that wrong? Some will say yes, but what’s the alternative? No lending system at all? The expectation by both parties entering an agreement is always that the agreement will be honored as written. If that expectation is lost and a borrower knows the bank is likely to just give up on seeking repayment should the borrower default on the agreement, it would create the obvious moral hazard and kill the entire lending system. So, we’re stuck with what we’ve got – Like it or hate it.

Make up for men; Men use of makeup. Cosmetics giants L’Oréal and Shiseido seem to get it.