The above prices are from Monday August 24th closing prices of Lumber – with high of $859.95 – and two popular ETFs WOOD and CUT. I bring this up as I suggested Monday in my live trading room that I believed it was time to tightly trail stops for those long lumber and related plays. Lumber was a Trend Reversal theme first posted to clients back in May. 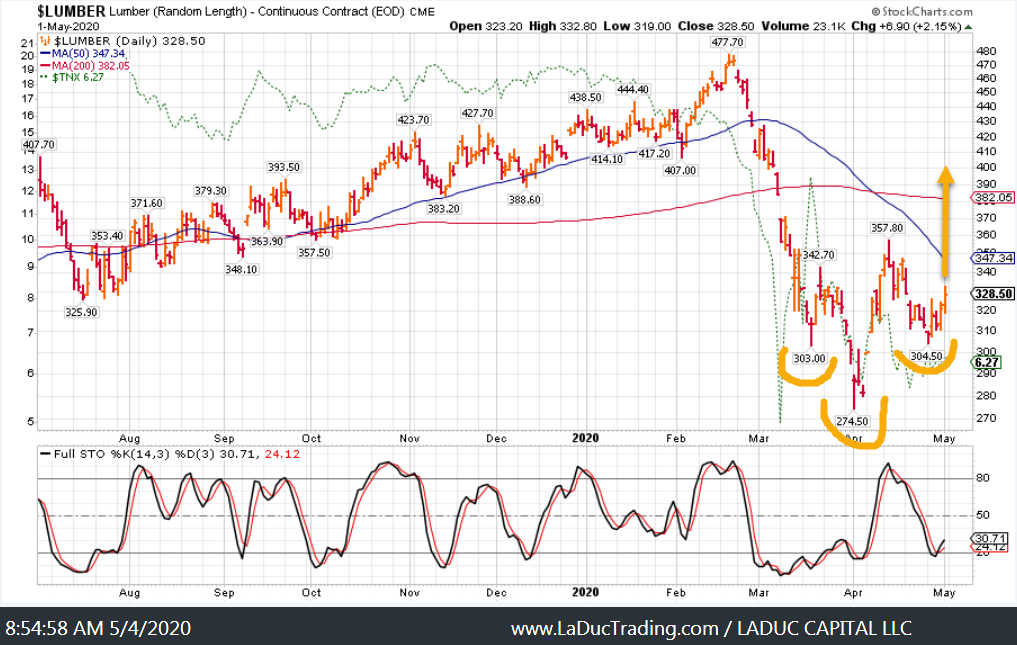 Then Monday morning, I mentioned in my trading room that I suspected a reversal in Lumber on profit-taking – although I am still bullish the theme as a Trend play for reasons I discussed and detail below. 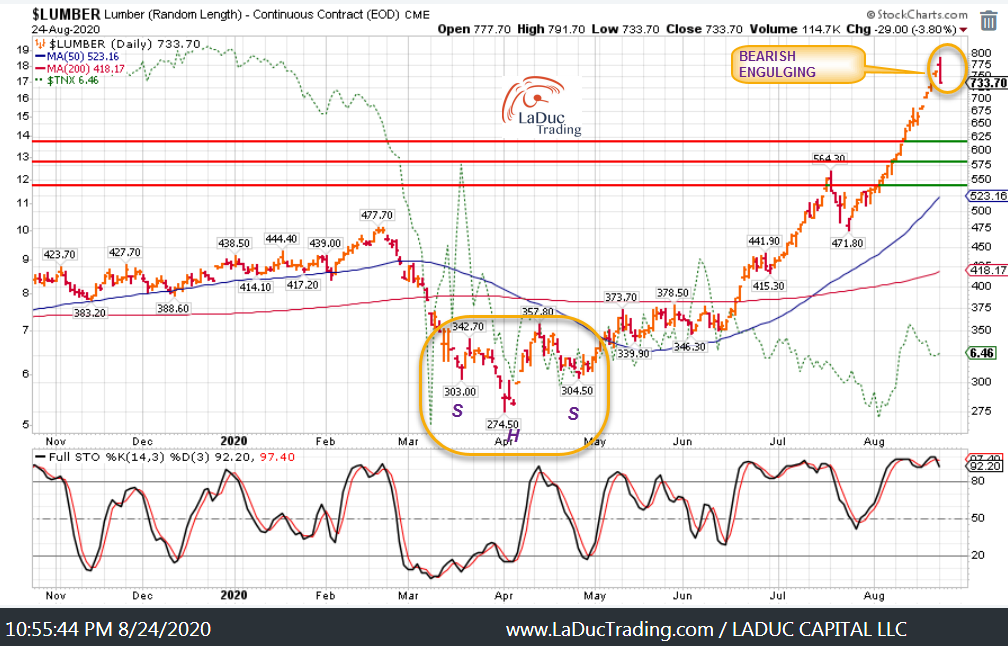 Ironically, I had been discussing Lumber with a Lumber expert/trader over the weekend. Here are his thoughts in a worthwhile thread on why lumber went parabolic and what could lie ahead. Then just Monday morning I tweeted Lumber could reverse on news Lumber Tariffs might be cancelled. Just a few hours later there was news announced that Canada wins trade battle; WTO says U.S.-imposed tariffs break rules.

On Monday, Lumber Futures ($LBS_F) were also simultaneously testing the Yearly R4 (Resistance Level 4) pivot point according to @Pivotal_Pivots.
And then today, lumber futures went limit down off the biggest new home sales print since 2007! It was totally a “buy the rumor, sell the news” reversal set up on Macro news, Technical levels and Sentiment!

After my call to protect profits or outright short Lumber, I talked to clients in my trading room Monday about my Lumber Thesis (bullish longer-term), my Growth-to-Value Rotation (which benefits commodities), and my WAY-out- of-the box thinking on how lower Lumber prices could foretell pullbacks in AAPL and TSLA. Before you stop reading, just humor me and have a look at these chart overlays… 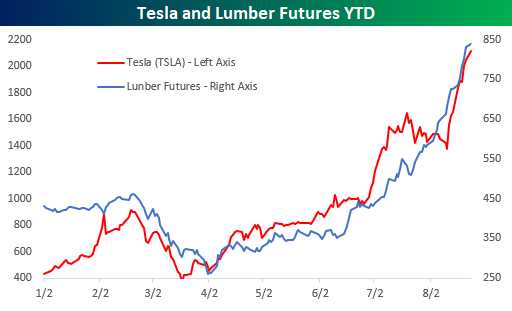 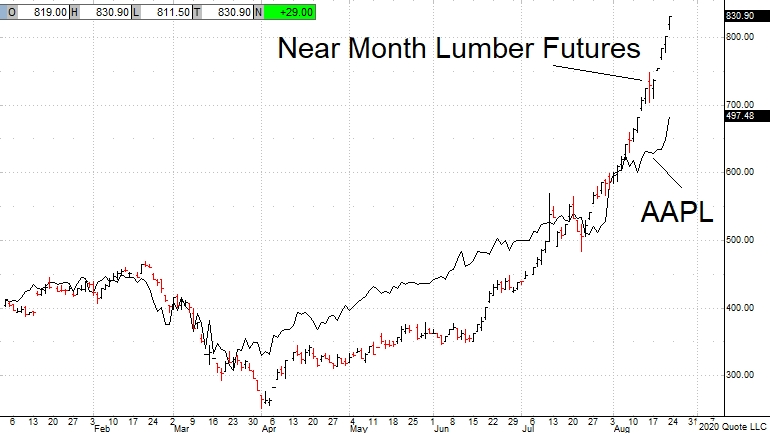 Here is an article I retweeted back in March 2018 about the perfect storm for lumber markets:

Lumber hit ATHs in May 2018 ($648) with a median price around $200. Fast forward two years and Lumber is in the mid-$800s and likely ‘settles’ around $600 because the lumber market just cleared large swaths of trees before the beetles destroyed them! Another words, talk about a Supply Inelastic problem! They just over-forested 20 years worth of logs in British Columbia (also covers area in Northern California + Oregon) which requires decades of new tree growth before harvesting.

A Bloomberg article refers to the tree devastation as a potential threat to global emissions. They bury the lede for traders but I will unpack it for you.

When major supply disruption from natural disasters (beetles, fires) meets diminished mill operators and operations (from 2005 GFC fall out and 2020 pandemic) at a time of heightened demand in lumber (from trend in work-from-home improvements to surge in home buying due to millennials and migration), we have the very real threat of asset price inflation – not only in lumber itself but also in homes. And this is in addition to Tariffs on Canadian lumber imports into the U.S. averaging more than 20%.

The housing sector is one of the most important and dynamic parts of our economy. According to the National Association of Home Builders, the housing sector directly accounts for roughly 17% to 18% of national gross domestic product. And that’s why when Homebuilder sentiment rises, so too do prices.

Given this sentiment, it is no wonder many are bullish homebuilder stocks and housing:

Thanks to record-low mortgage rates, the fair value of houses in America today has actually gone up faster than house prices have gone up. The typical home in America is underpriced by about $75,000! Steve Sjuggerud

‘Demand Inelasticity’ connotes the price-insensitivity to higher input costs. Mortgage rates are at all-time-lows, demographics of Millenial buyers support demand, lack of inventory drives scarcity…. This would normally be tempered by Permanent Job Losses post Covid and global economic contraction BUT, we have lumber ‘Supply Ineslasticity’ wherein replacement and substitutes are very limited and not time-sensitive, while new mill investment is capital intensive and labor-intensive.

Add to that those damn beetles invading the world:

A plague of tiny mountain pine beetles, no bigger than a grain of rice, has already destroyed 15 years of log supplies in British Columbia, enough trees to build 9 million single-family homes, and are chewing through forests in Alberta and the Pacific Northwest. Now, an outbreak of spruce beetles is threatening to devour even more trees in North America just as similar pests are decimating supplies in parts of Europe, creating a glut of dead and dying logs. Bloomberg

‘Inventory levels are at an extreme low, which should fuel even higher prices ahead’ – Bloomberg News

But now that lumber prices have intonated a pullback, is it the end of the trend? I don’t think so for all of the above reasons and quant positioning:

Earlier this summer, the lumber futures price rally was mostly confined to the September contract, indicating a near-term supply squeeze. But the last two weeks have seen the other contracts rising at the same pace. Not quite catching up yet, but matching the rise.

Canada’s Lumber Stocks will benefit from the lumber shortage, boom in home renovations and housing, and Fed-induced low interest rates, but there are few to play and they are not easily accessible to US traders let alone optionable: CFPZF, IFSPF, WFTBF

My US-based bet is on RFP – a deep value play that I have called out in my trading room the last week. Resolute Forest Products is the largest producer of Paper and Paper Products East of the Rockies.

Divide market cap by capacity: ~$160/mfbm, which is 2 to 4x cheaper than peers & a discount of 4x to building new milling capacity.

This ignores the other 3 biz areas they have (pulp, etc).

Prices like this imply it’s possible to double 2018 highs.

August 20th – two upgrades on RFP are what prompted my attention on it again.

Sees strong free cash flow from soaring lumber prices, which RFP can use to reduce its leverage.

I also like it because of its growth potential. With just a $293 million marketcap, it represents 4.7% of the $6.2 billion paper and products industry.

Interfor is a Canadian-based pure-play lumber producer with 70% capacity in the US South, so tariff exempt but they get to report in CAD which is an advantage. Both are possible takeout candidates. At $18 it is 33% below it’s 2018 high.

“Scaling this move” - we haven’t even capitulated yet!

@sentimentrader points out on the Nasdaq exchange, 42% of stocks have now been cut in half from their 52-week highs.

And why I’ve been warning clients for two months there was/is an air pocket of risk. $QQQ

it's ugly and painful out there, but have we reached "capitulation"? not if we scale breadth and magnitude measures to 2yr avg and compare with past corrections.
bounces will happen but important to put this correction into historical and vol adjusted context (i.e. minor)

And $MSTR is swinging on a prayer.

Take care. Bitcoin has an eerie looking Head & Shoulder formation that if triggered can represent a $27,000 price drop into measured move of $15,000!!! 2

WHAT IF oil crashes?

Cathy/$ARKK runs out of liquidity runway?

And higher yields with inflation stay sticky or climb?

When do credit markets start to worry?

12/13 while the equity vol surface is showing substantive fear with a VIX of 29 and more importantly at the money implied vol at 24.33 which is approaching the 90%ile inclusive of COVID and 2008. To put in perspective, same level as Volmaggedon.