SEMIs on the Edge 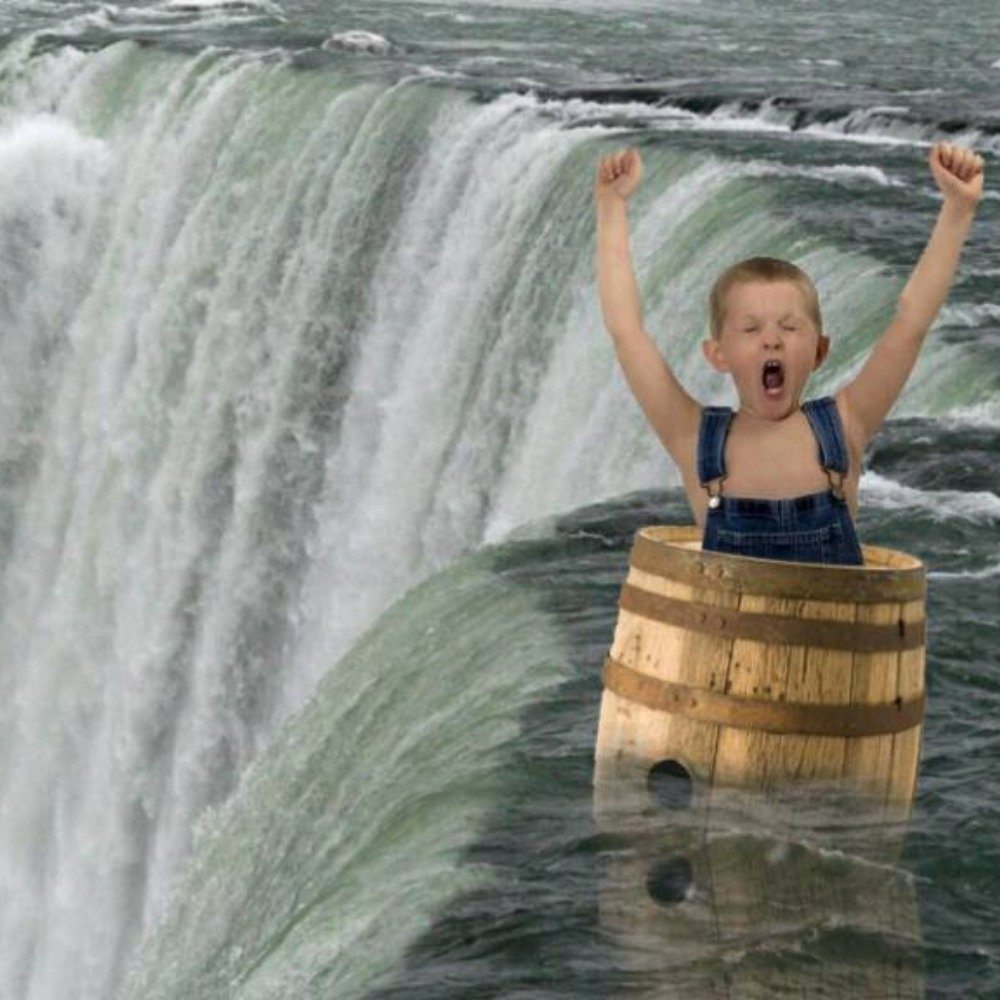 The SMH/Semiconductor ETF was the clear winner outpacing the pack by a wide margin. It gained another 7% in September alone before pulling back 3% this week–a slightly larger pullback than during Brexit. Curious. I could look for a narrative but I find most often price action works best; the ‘obvious-in-hindsight’ narrative follows.

Big Picture: After an unrelenting move north in semiconductors–talk about jumping up fish–I feel the move is nearing a temporary ‘top’, which often leads to a normal digestion/distribution period which can be volatile, then a tipping point soon after. Why tipping versus continuation? Vertigo. At some point, these happy-go-lucky investors are going to look down and see how high they are.

I am starting to see that moment in the charts:

Advanced Micro Devices (AMD) was a crowd favorite on April 22 when it launched 40% in one day. Most had forgotten they were still around! Many jumped on to ride it from $3 to $8. When I posted my AMD swing short trade set-up idea yesterday, I received a dozen hate tweets. That’s when I knew I was on to something and started looking into the sector as a whole. 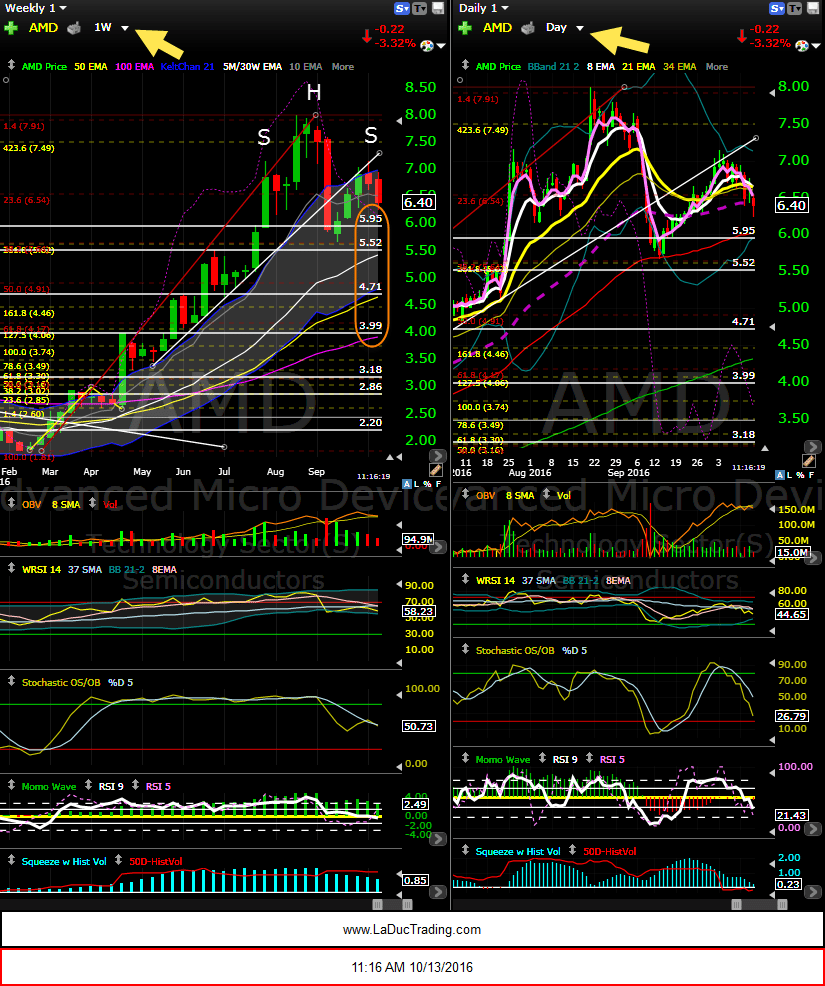 Now I sense the SEMI investor is a rabid crew. They adore their (easy) gains, feel invincible. In short, that’s when complacency is overdone and the thrill-ride suddenly ends. I look for signs in the chart–patterns, divergences, money flow–when I don’t necessarily have a macroeconomic or fundamental thesis to inspire me. Keep in mind, I’m a chartist. I actively look for major trend reversals as investment themes–both long and short. I adored SEMIs in May: See my BIG PPT at MIT from May. I even spied AMD in April as great swing long.

But that was then. This is now. I feel we are approaching a temporary “top” in SEMIs, volatile digestion/distribution is on its way and a tipping point for some will be made obvious, sooner rather than later. AMD preceded the SEMI rally, in that it broke-out first. It so happens to be the one that seemingly has ‘fallen over the edge’ first. Some of these plays have yet to roll down to the edge, where the real testing takes place. Most will bounce there, or break then bounce before preparing for the really hard fall. For now, I just want to post the charts of Semis I am watching that signal investors might start to open their eyes as that sense of vertigo kicks in when they just start to tumble over the falls.

For detailed trade set-ups, I will be posting these in my Newsletter (for swing positions) and in my LIVE Fishing! chat room (for intraday chases). As always, please feel free to let me know if you have any questions or comments: info@laductrading.com. Happy Trading! 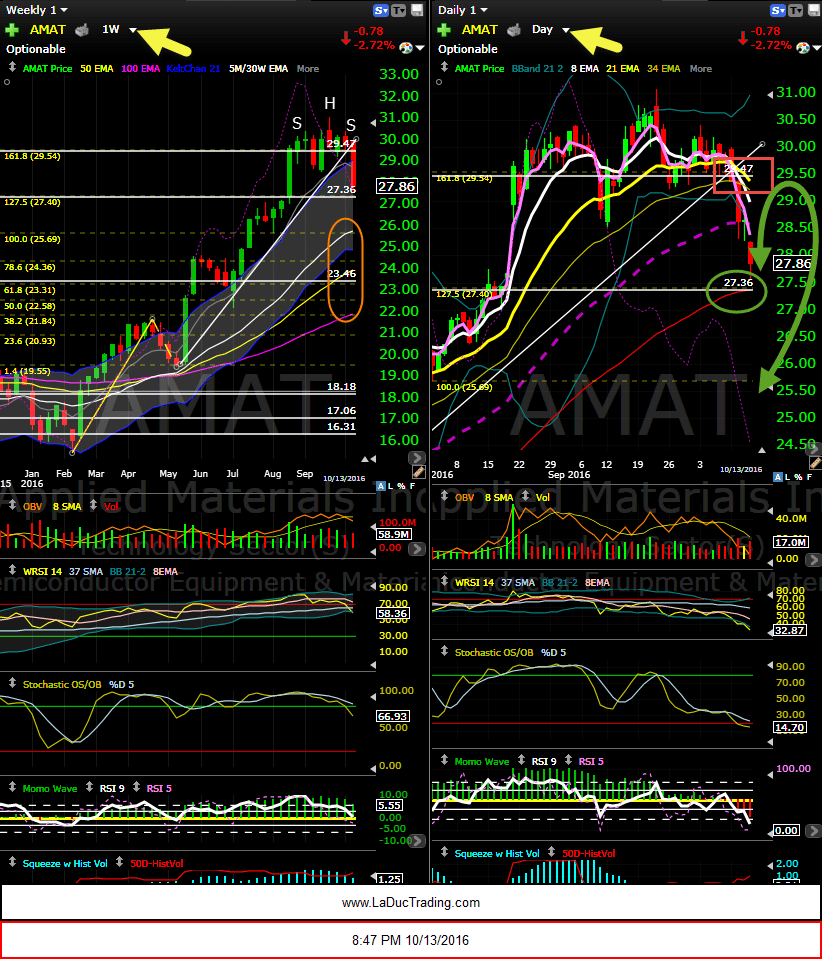 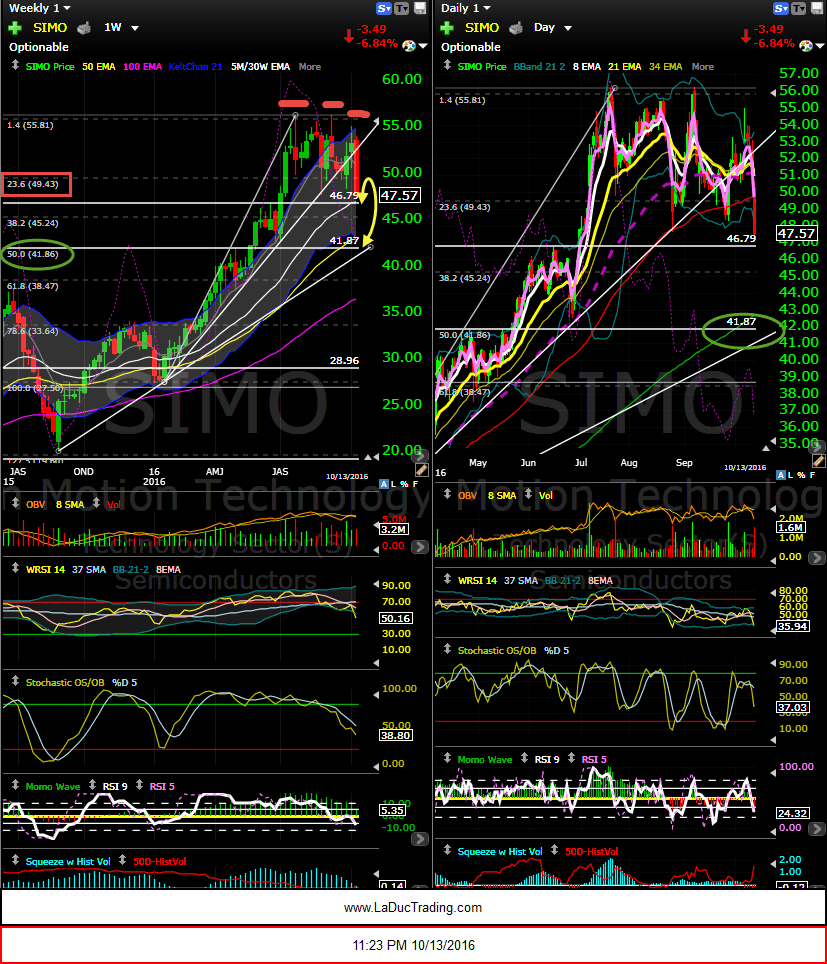 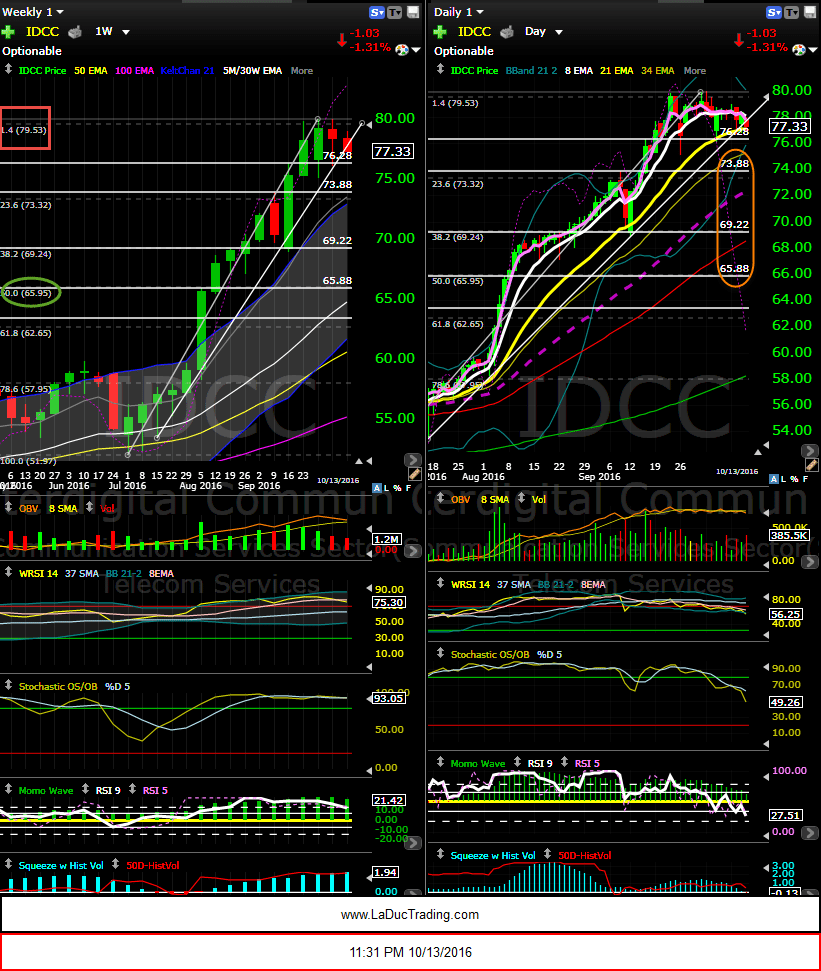 Timeframe Matters: All of these charts are short-term oversold, due a short-term bounce, especially since so many have just touched ‘the edge’. My point: the edge or trendline support is due to be retested in future weeks and given the pattern, I am betting it fails and a new pattern emerges that better illustrates the ‘top’ formation leading to the tipping point of a trend reversal short in the sector and a waterfall type event. Here are some more SEMI charts setting up: 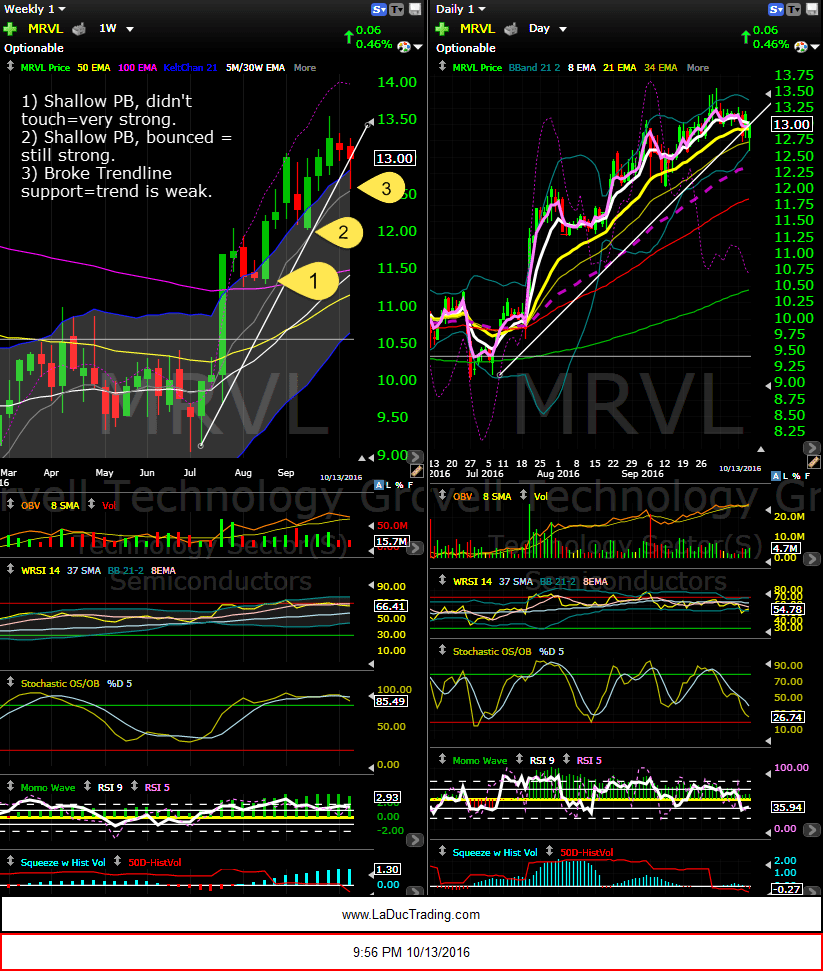 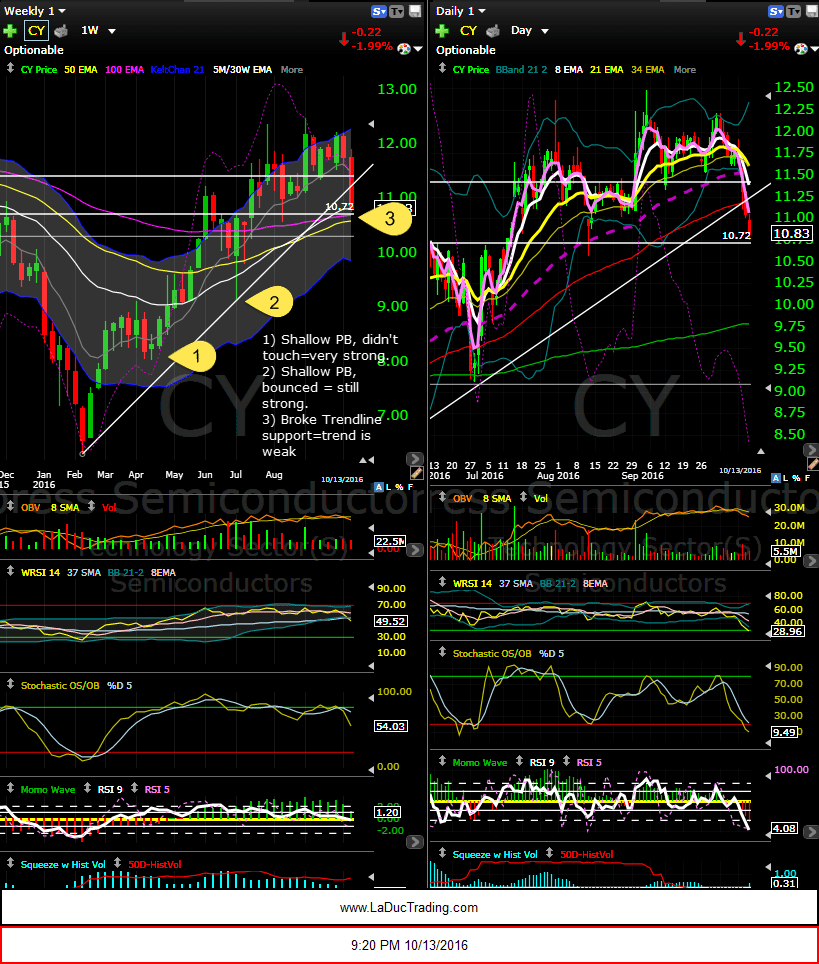 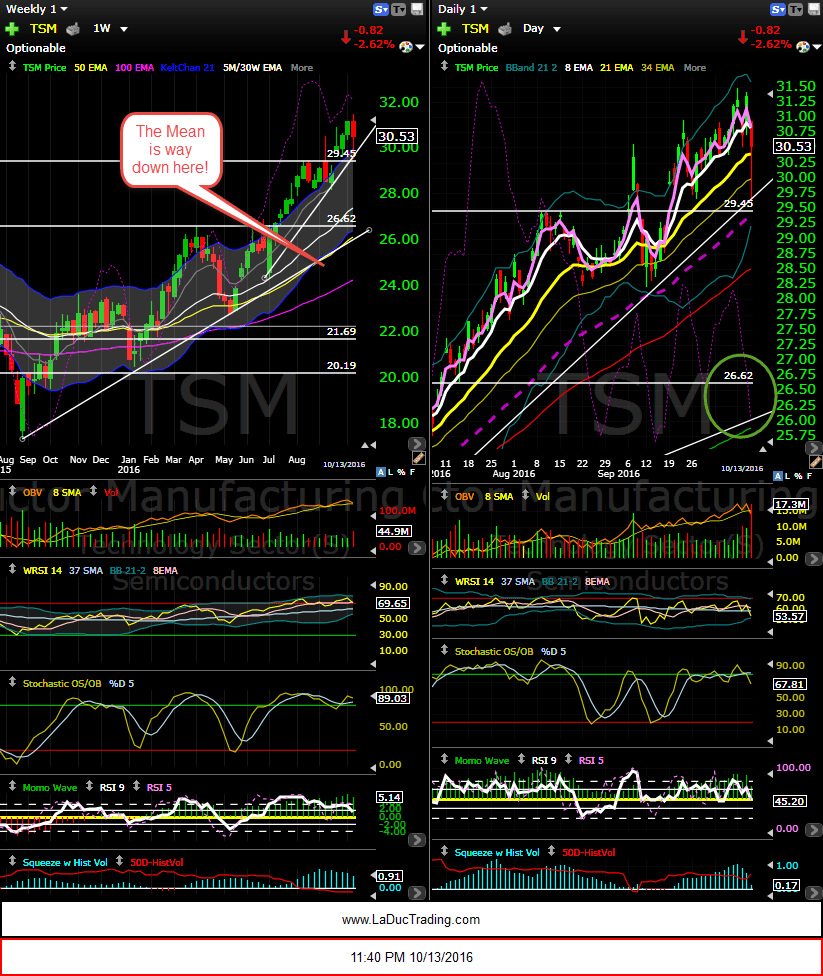 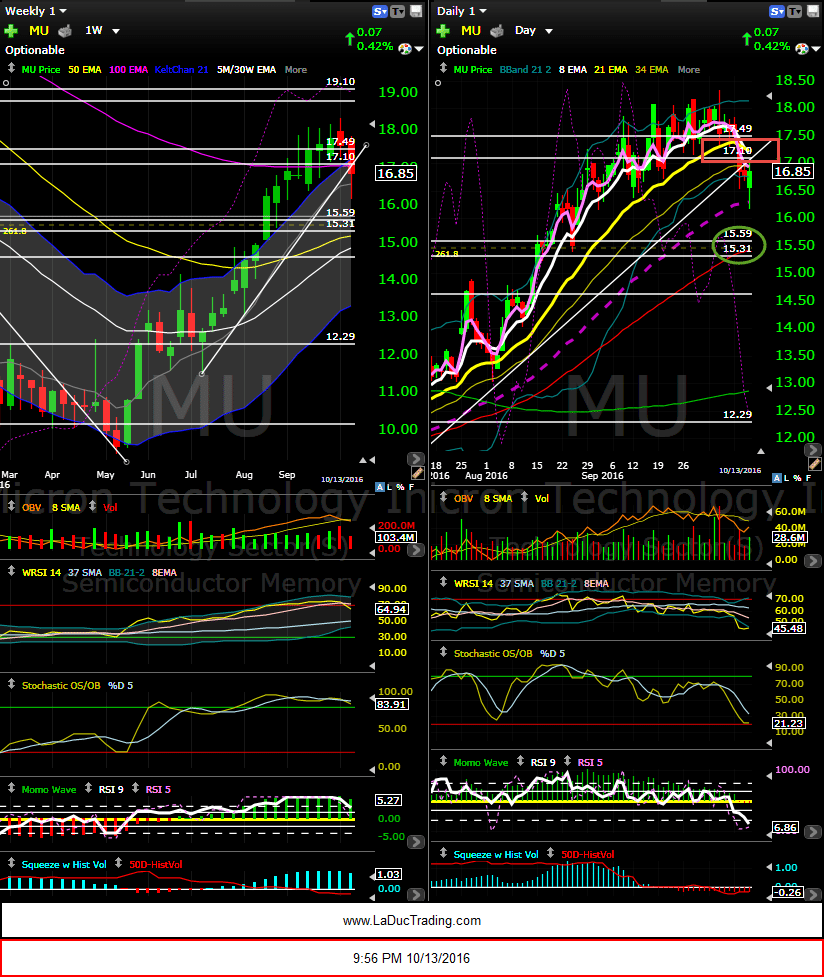 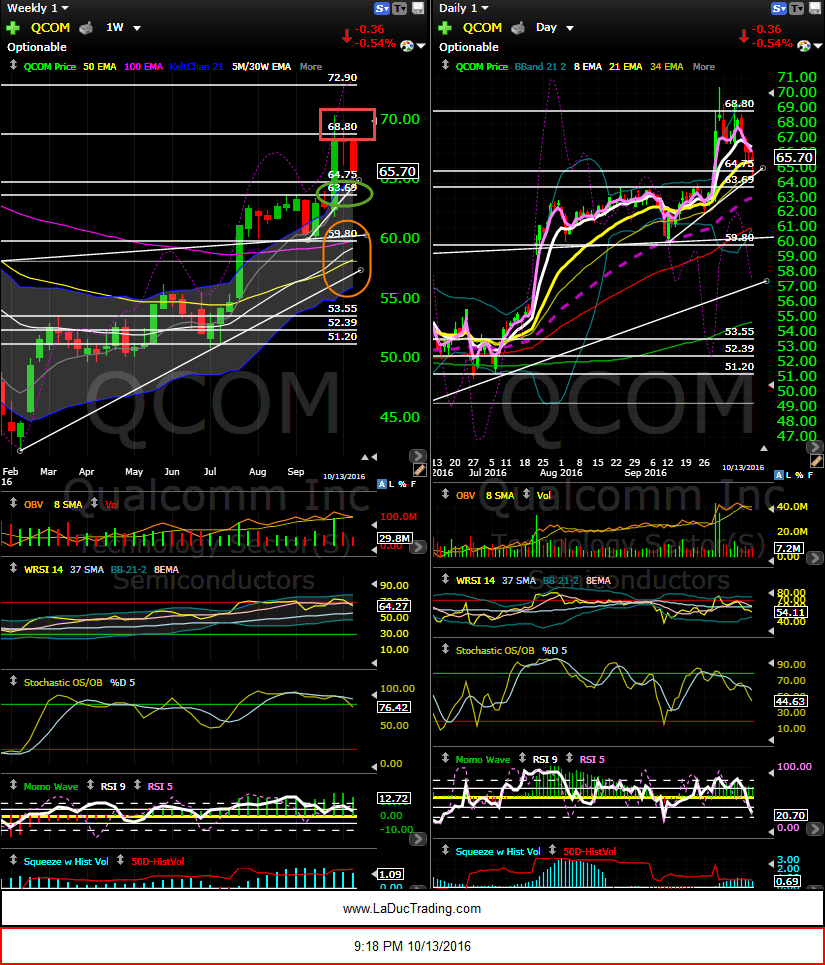 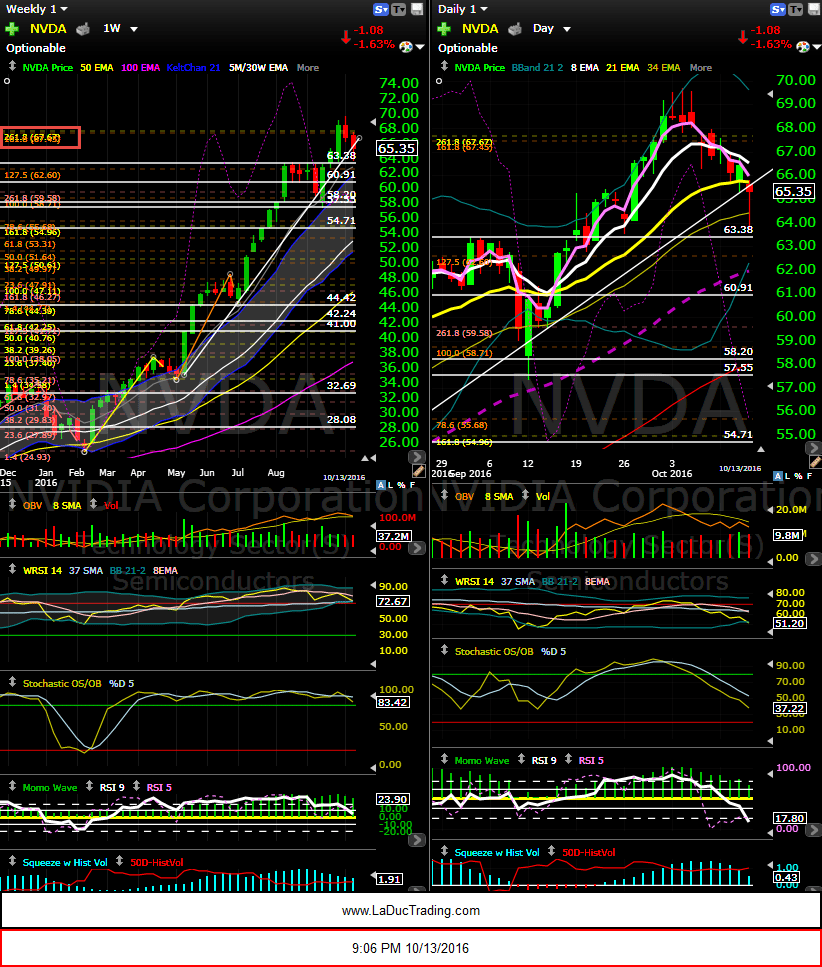 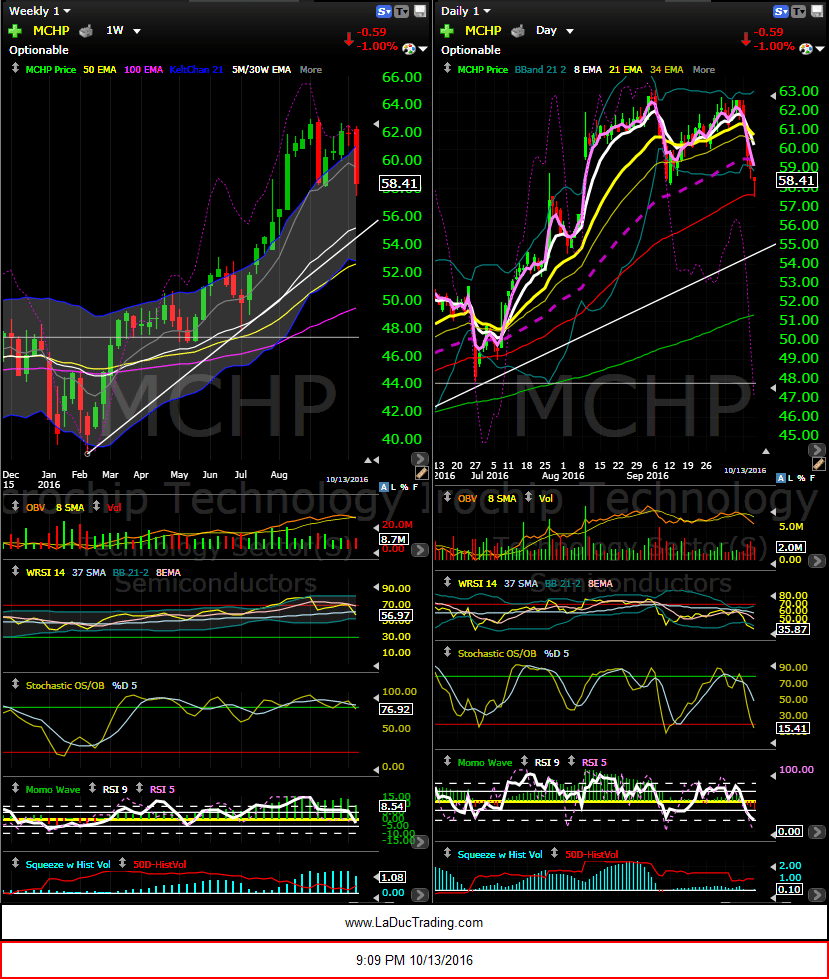 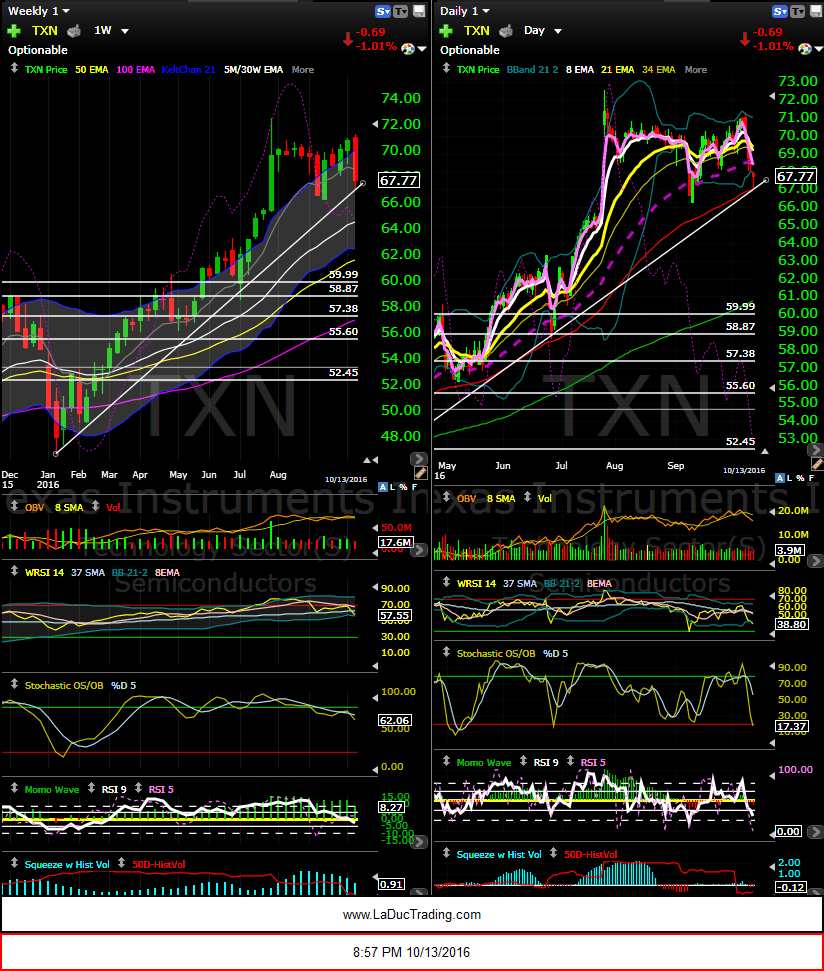 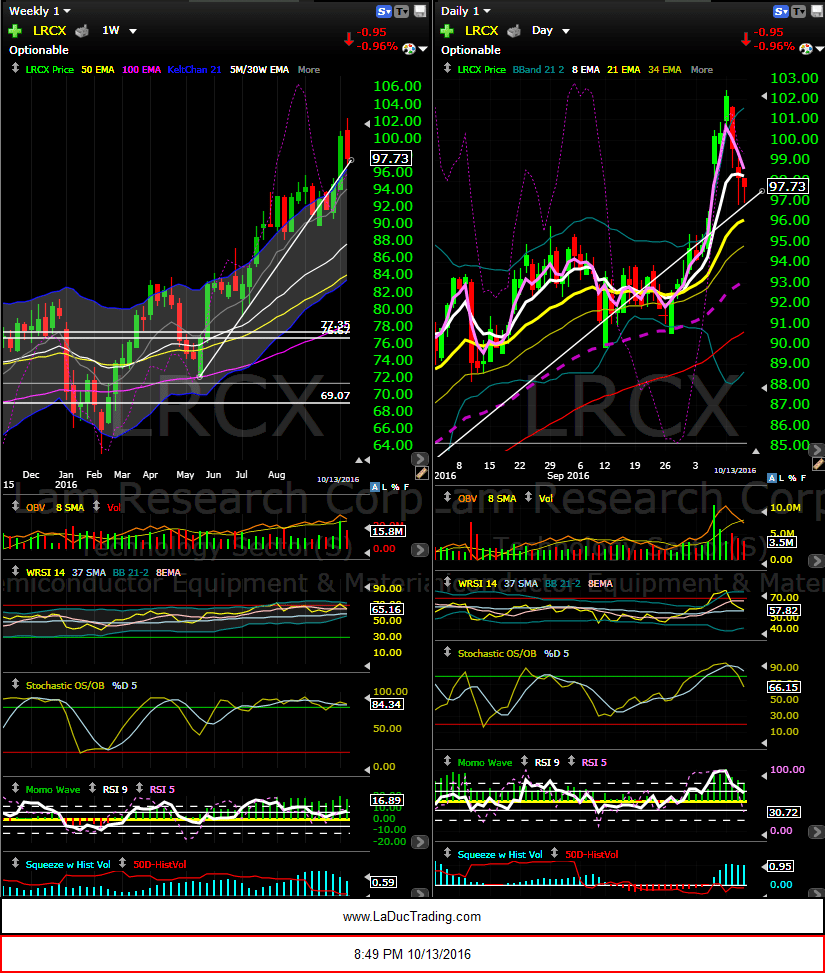 Looking out on a larger, in this case, weekly timeframe, helps eliminate the noise from the day to day action. With that, not all charts are ‘as ready to go’–like AVGO, ON, ASML, SWKS–but once the pressure builds in the sector, few are spared. Basket trading, for me, is about finding a theme, and choosing the stocks within that group that will have the most volatility to trade. I will be analyzing these plays in my newsletter along with my trade set-ups, price targets and option tactics.  Suffice it to say, I see a Mean Reversion trade setting up in the Semiconductor space. The ride up was gleeful. But it’s time to be wide-eyed.  Good things happen slowly. Bad things happen fast. 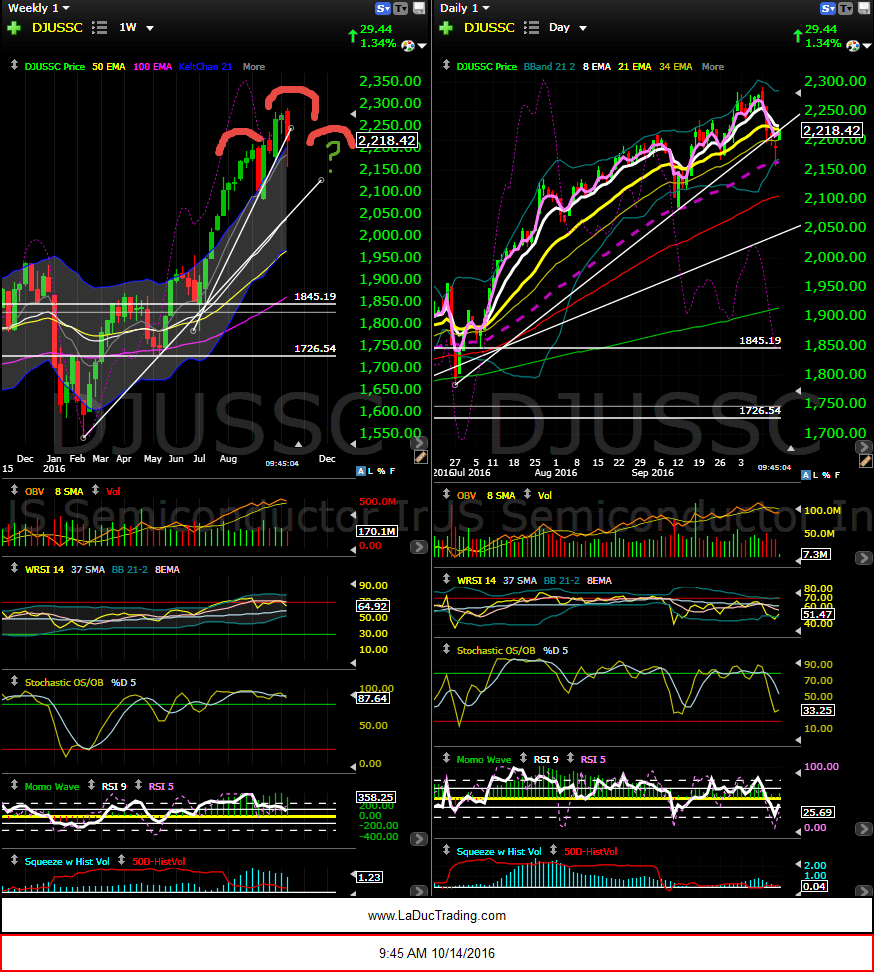