Each Sunday/Monday I post my Weekly Fishing Plan for Clients. Please keep in mind, we need to be flexible when fishing. We can start with a plan on where to fish for the coming week, but weather can change quickly, so daily updates will be posted referencing this living document so as to better set and adjust expectations around where I want to fish, when it’s a good time to fish and when it’s time to wait or cut bait. To Great Fishing!

After the most recent pullback in September I gave my expectation for market direction here: Market Thoughts: When Is It Safe To Buy?

We are still on track for SPX $3060-3080 before a sizable test – one way or the other! Having said that, Volume on the S&P is at lows not seen since 2007. No buyers. No sellers. How easy it will be to move markets once ‘they’ step in. Careful either way… And Why I wrote: The ‘Numbing Effect’ of Uncertainty

Wednesday is VIX expiration day and Friday’s have been de-risking days, but the Big Events that are market-moving are coming up:

Today, the Fed started cutting rates in July and is expected to cut for a 3rd time on Oct 30. They are acting as if we are heading towards recession. @charliebilello

$29T in Global USD Bank deposits. $20T of it is “owned” by foreigners, and it’s leaving US Banks. @DeepThroatIPO

JPMorgan Warns U.S. Money-Market Stress to Get Much Worse

Private equity managers won the financial crisis. But will they cause the next one?

Oh the timing: $AAPL (with $FB) report just before FOMC October 30th. Individually they can cause a market pullback. So what are the chances both $AAPL + Fed disappoint, together? Keep in mind: Oct 30th fed cut expectation is now at 91.4%…

“….if the market thinks the only thing which is keeping it elevated is the prospect of more “cuts” down the road, then it’s going to fit to that model appropriately.” @MacroMorning via COMPENSATION & INCENTIVES

With 92% probability of Fed cut next week, Powell could be setting up market for disappointment.

$AAPL is a sell here pic.twitter.com/GhHiCztr9c

Small caps have run the most (compared to other indices) as they are comprised heavily of regional banks (which like the recent move higher in rates), so this is my focus for watching market sentiment: 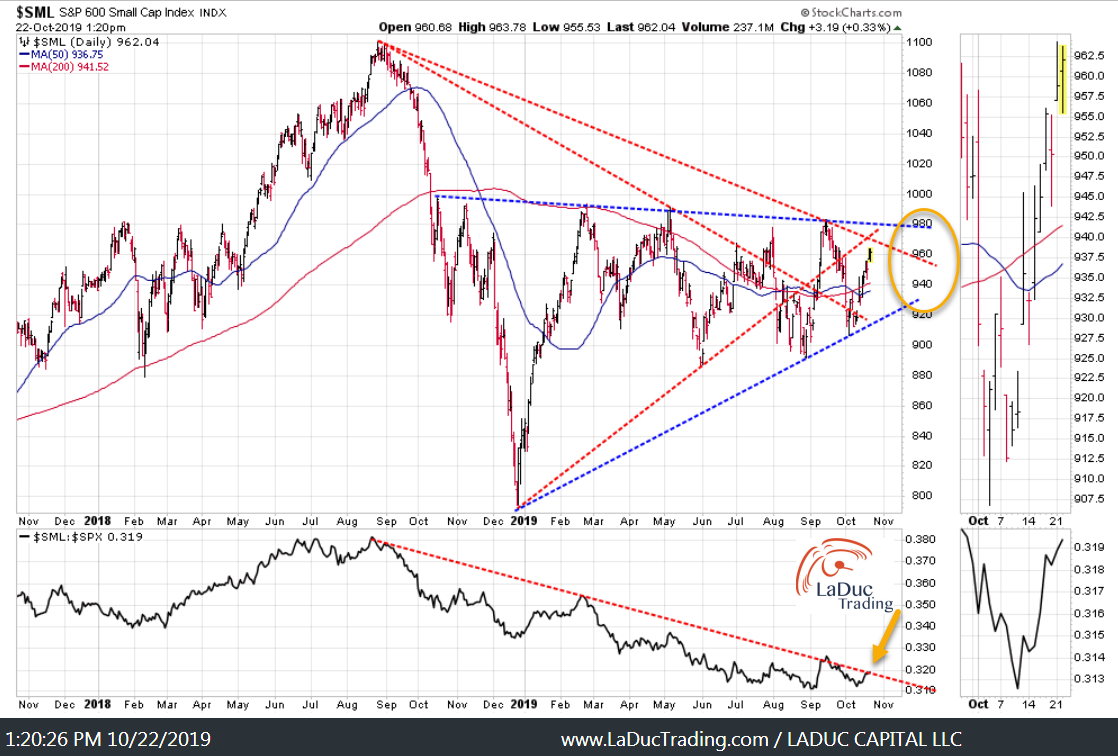 Speaking of higher Interest Rates, that call was well timed, but now that the 20-year has reverted to its mean (red trend-line), there will be many eyes watching if it bounces, or not. Gold, Silver and Miners move in lock-step of late so this is the Macro trade for many. And with that, the USD is also on important support… 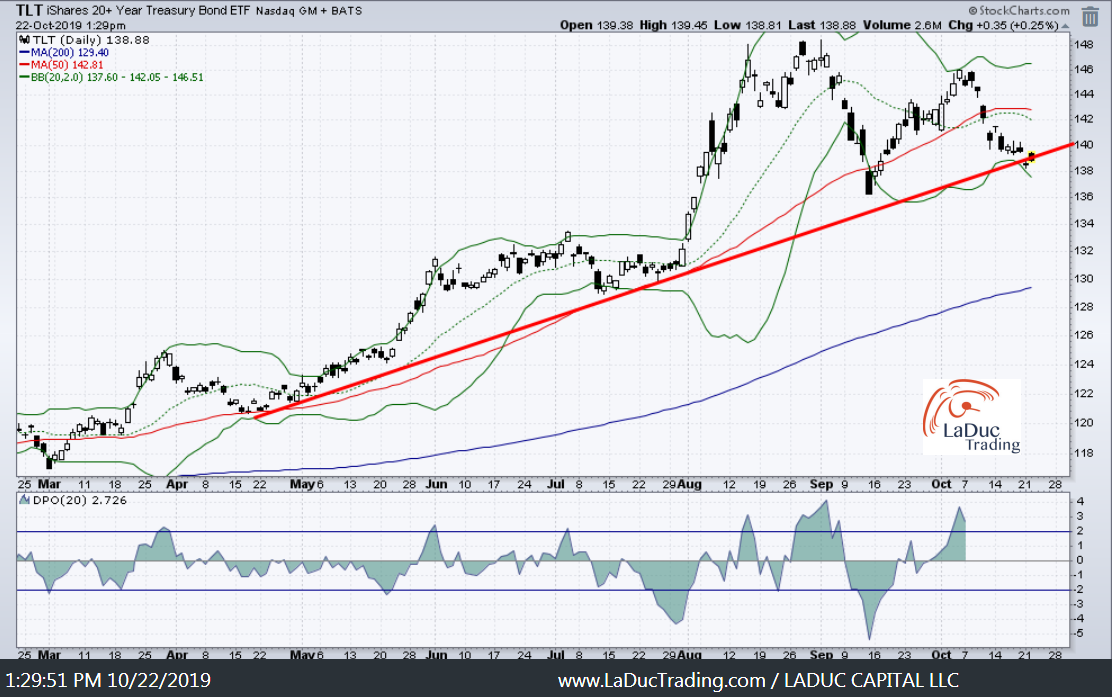 I have presented this chart in recent posts, most notably my Intermarket Chart Attack wherein I said my IYT:SPY ratio work looked short-term bullish.  We will see if it can ‘jump the shark’ at resistance. 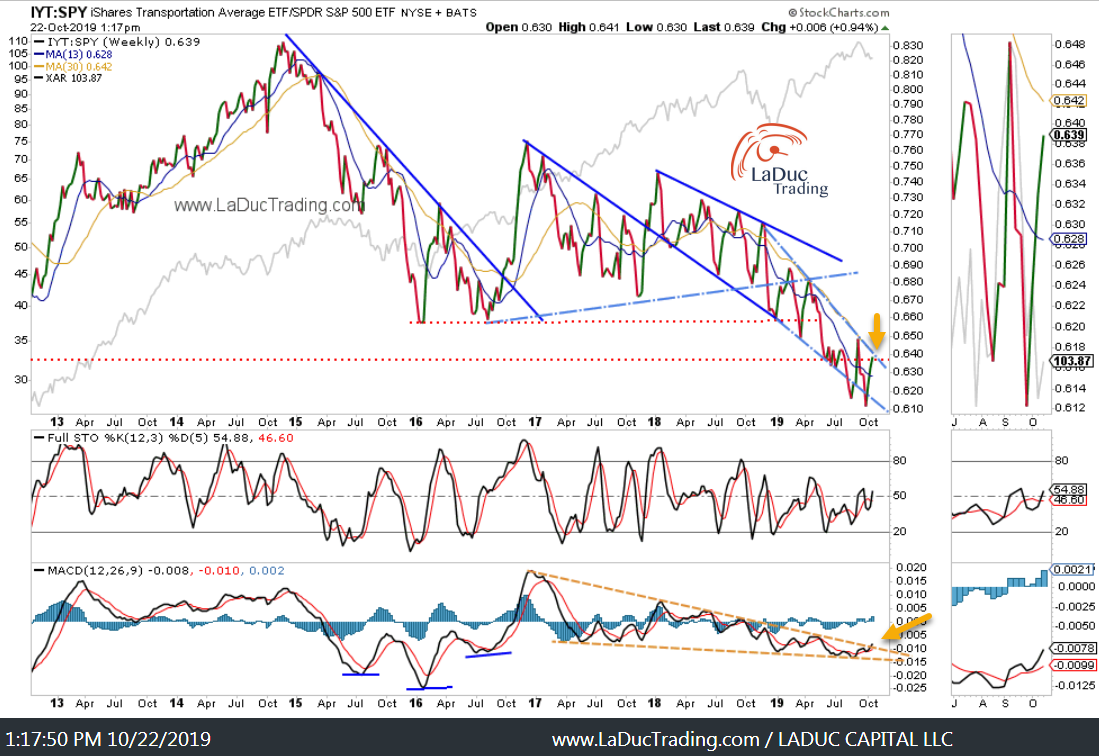 I have been focused on this rotation before it even became a rotation:  Monday Massacre. One look at IGV, MTUM, FFTY components and you will see that Unicorns are not flying so close to the sun anymore – WeWork was The Tell

If you own Unicorns – in $IGV $FFTY – because you figured “Well if WeWTF can do it then these other Unicorns are surely better ‘value’”… you might be in for some turbulence coming up. @SamanthaLaDuc Sep 22

And here’s the ONE BIG THING to keep in mind:

If they sell $AAPL $MSFT, why buy anything else? We may get to a point where Money Managers sell good stocks to make up for huge losses in private equity portfolios. 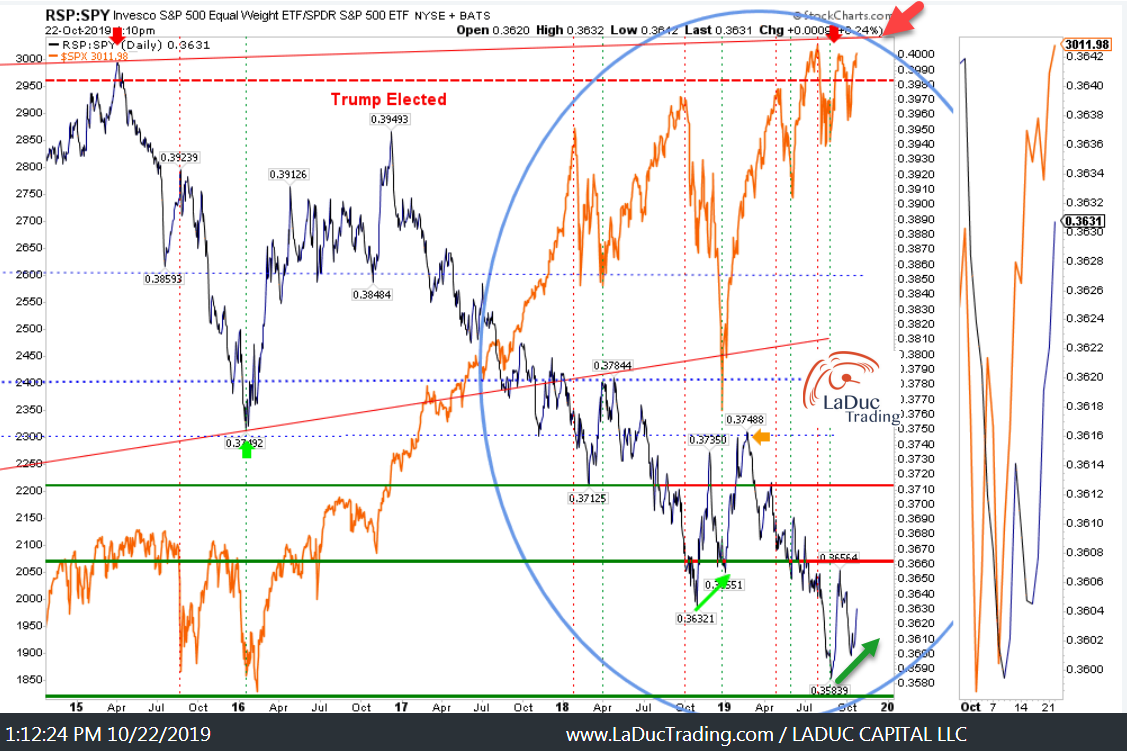 I already wrote about this in the “Earnings Season” section of the latest Gone Fishing Newsletter.

Wednesday is VIX expiration day and Friday’s have been de-risking days, but the Big Events that are market-moving are coming up:

For more color, find the section “Here’s the Uncertainty for the Coming Week” in the latest Gone Fishing Newsletter.

Trading Ideas from my Live Trading Room will be captured here intra-day and an email sent letting you know a Daily Recap is posted. 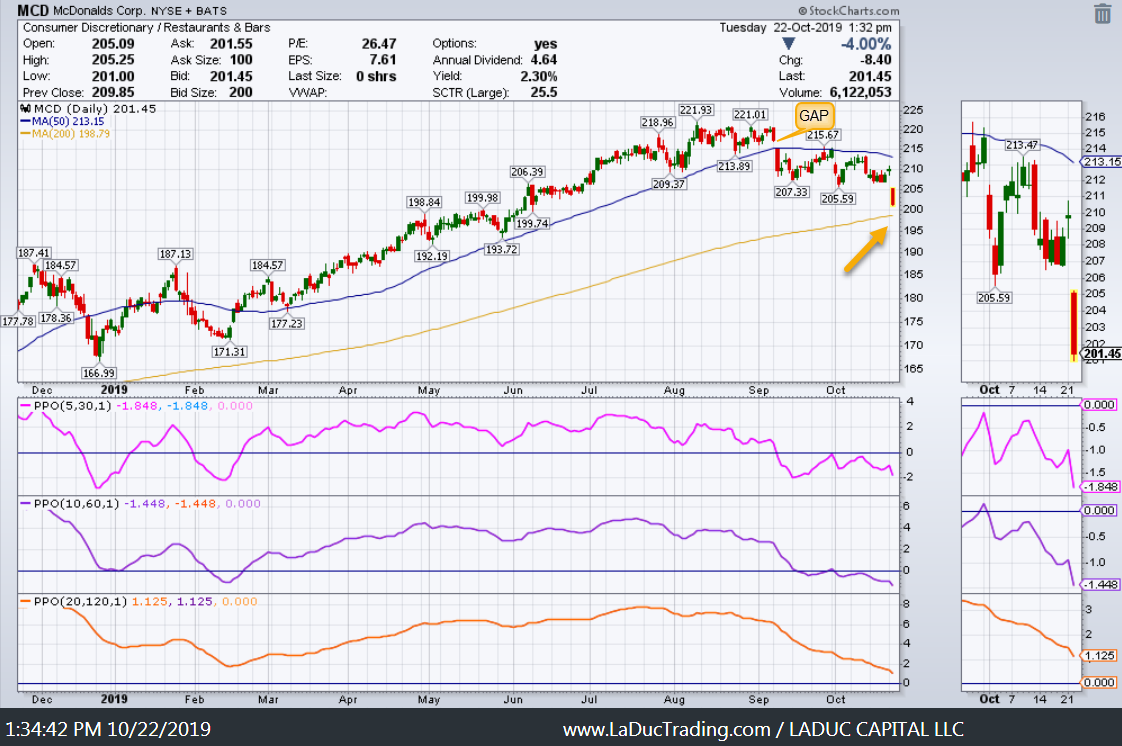 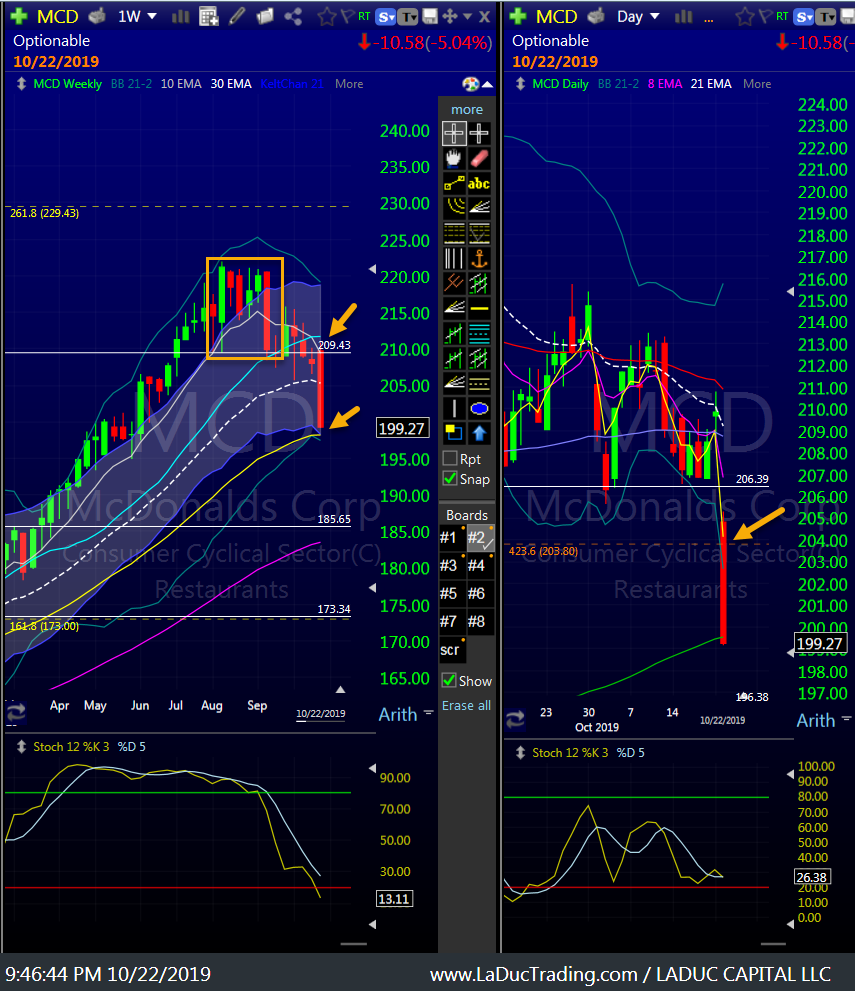 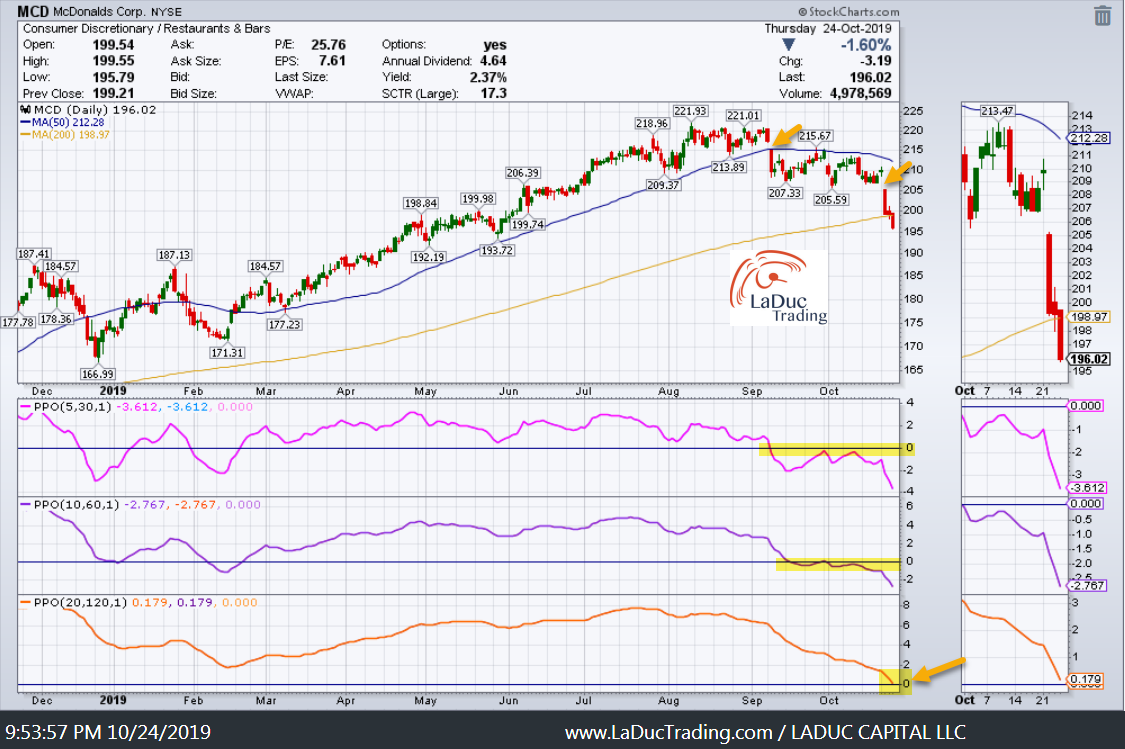 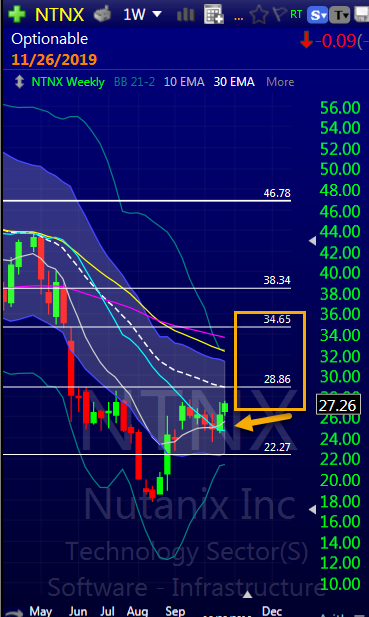 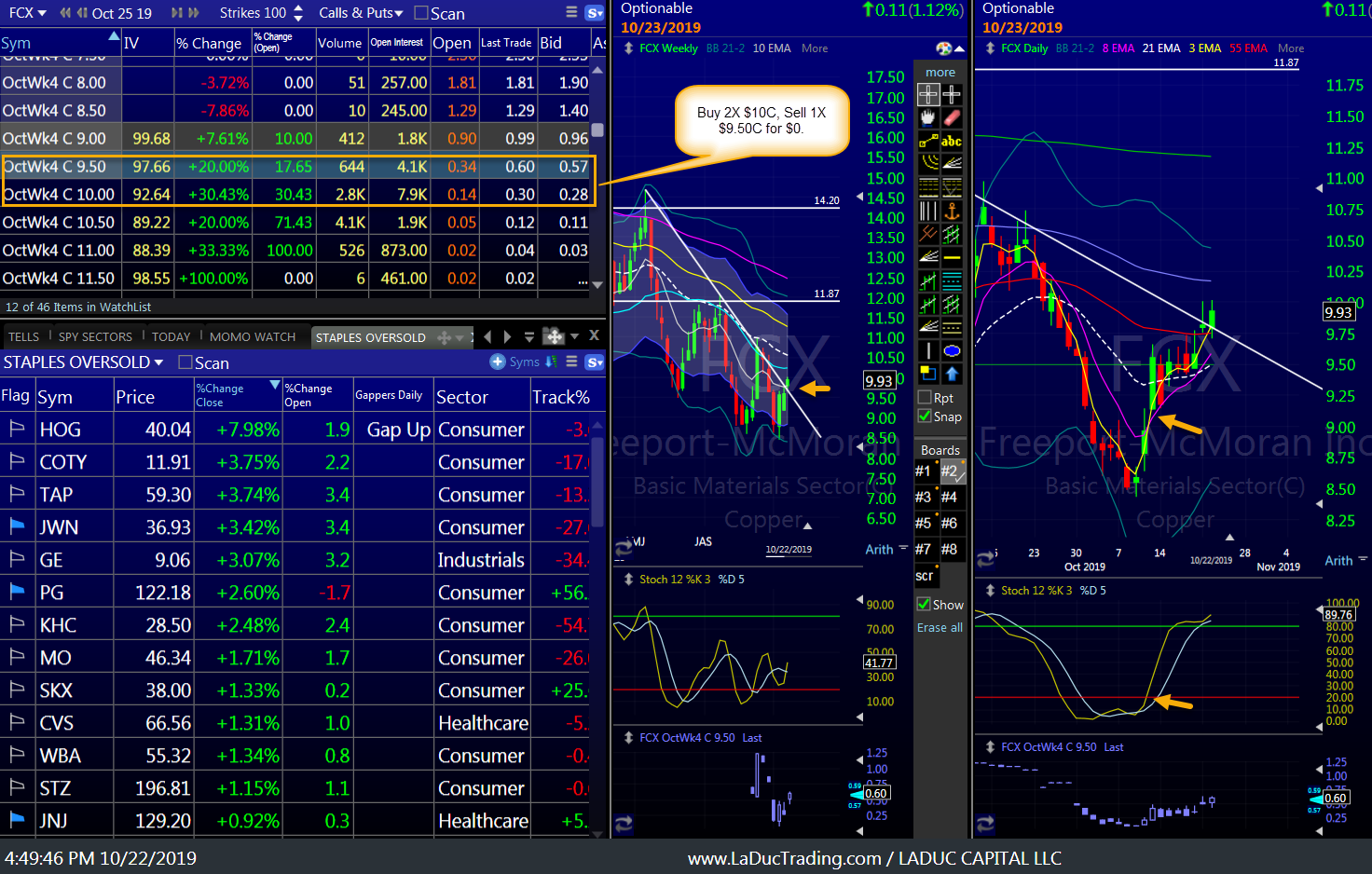 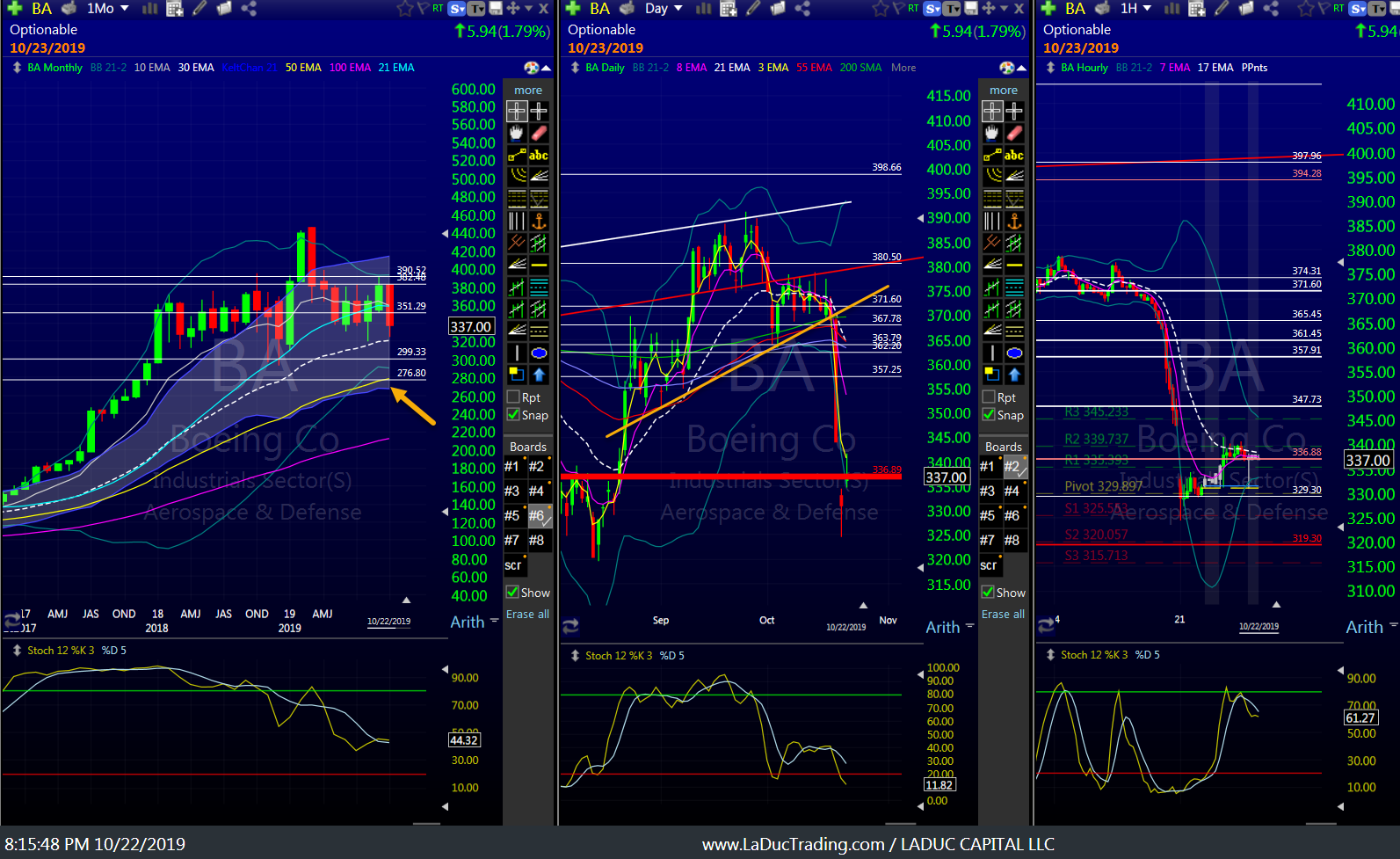 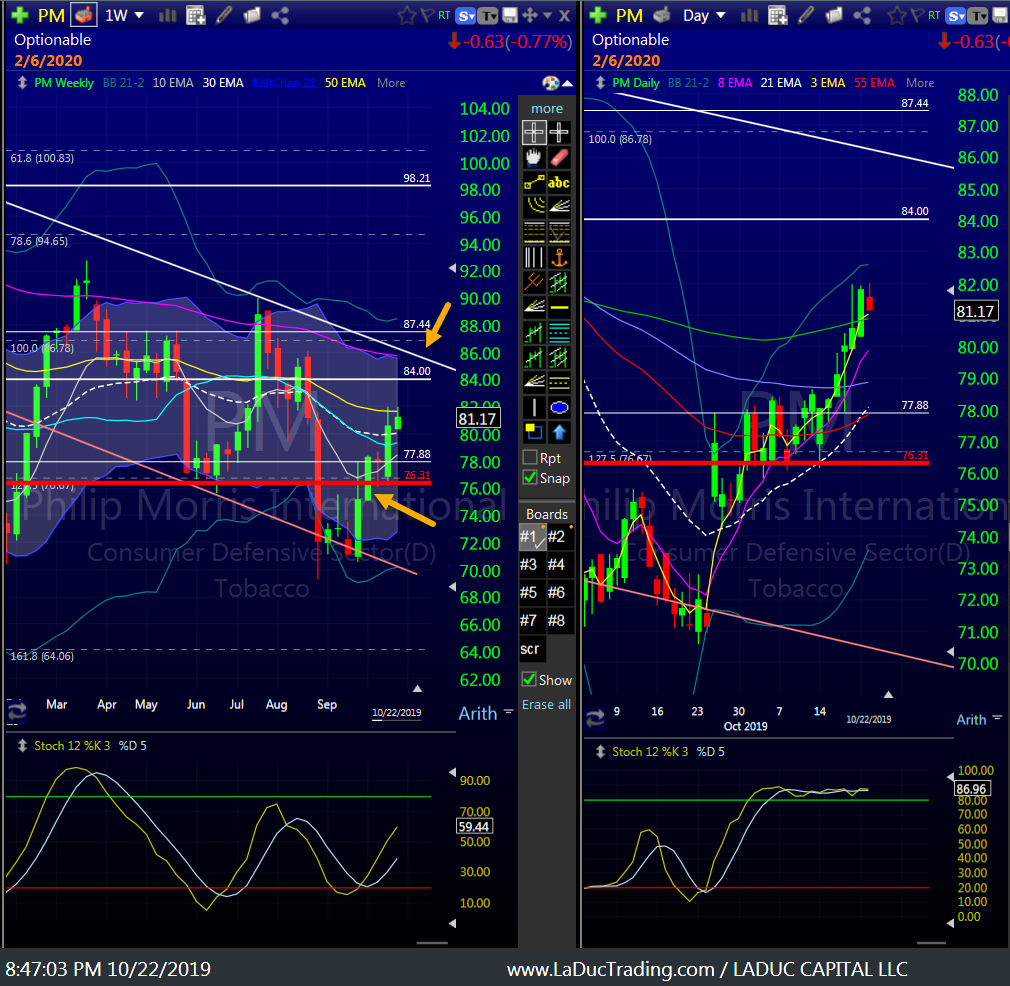 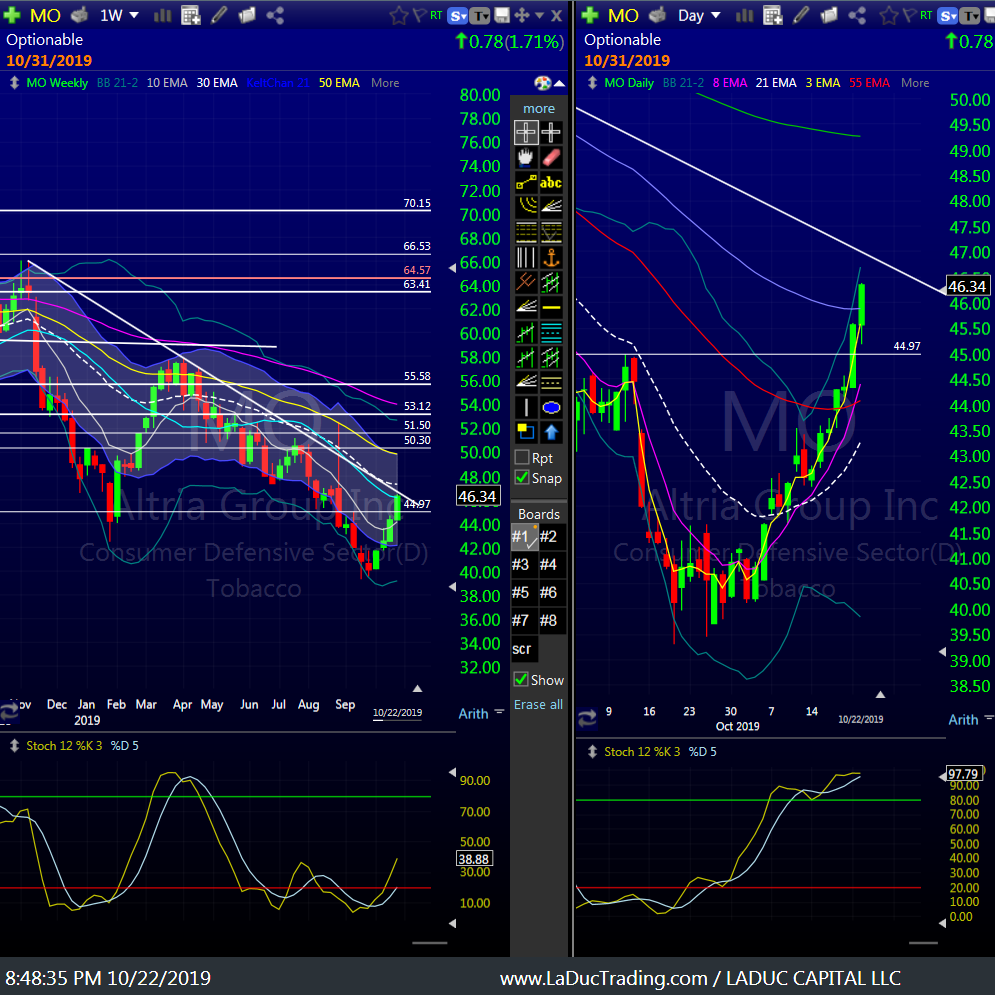 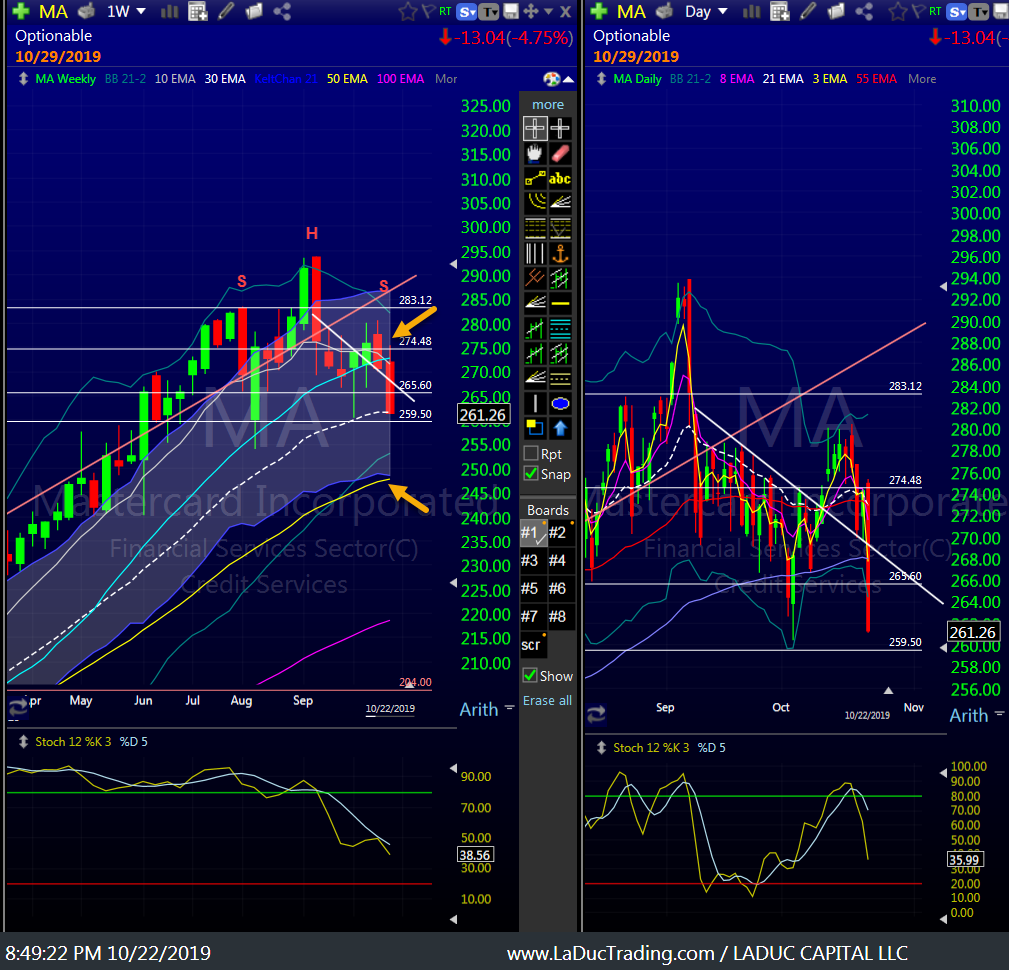 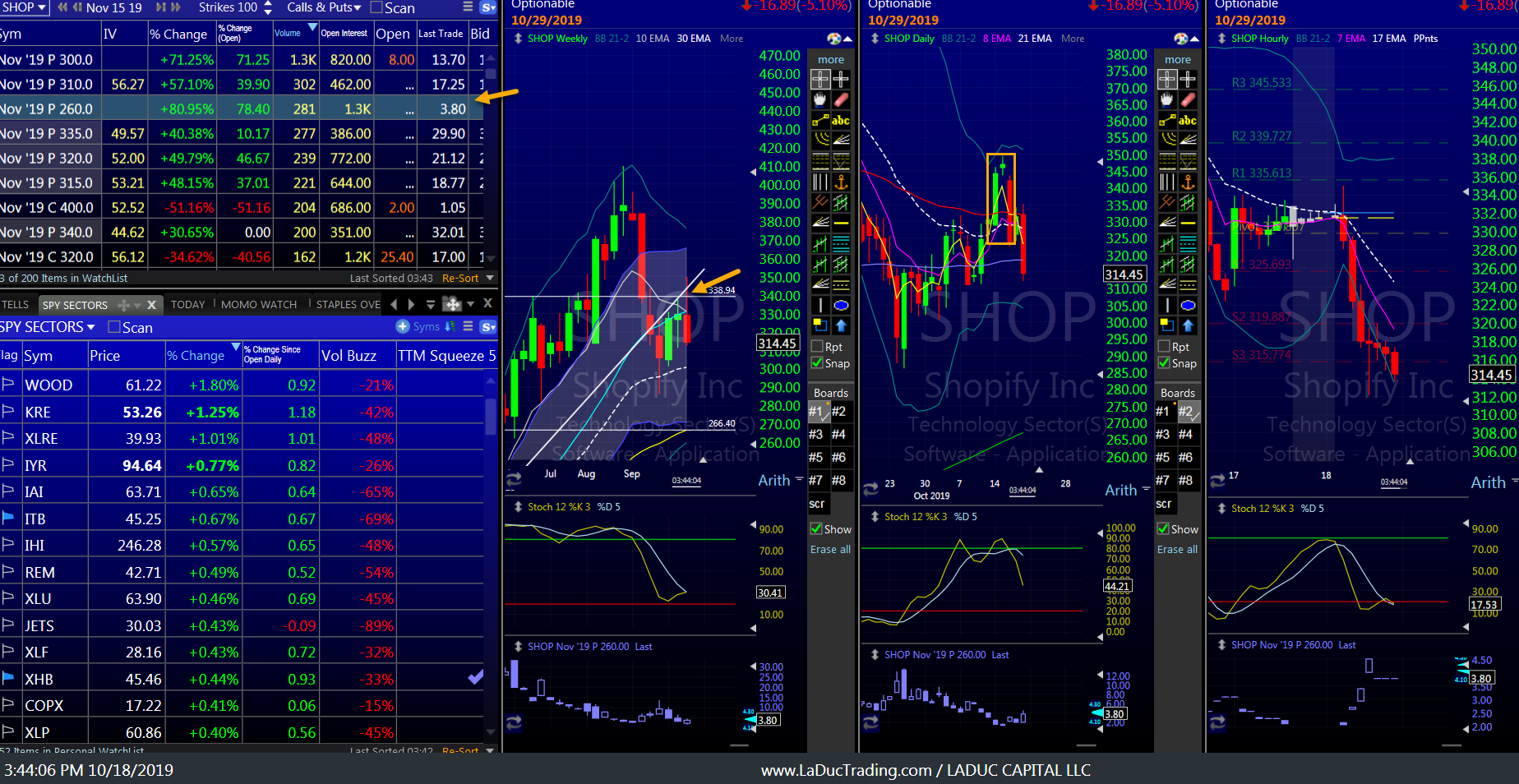 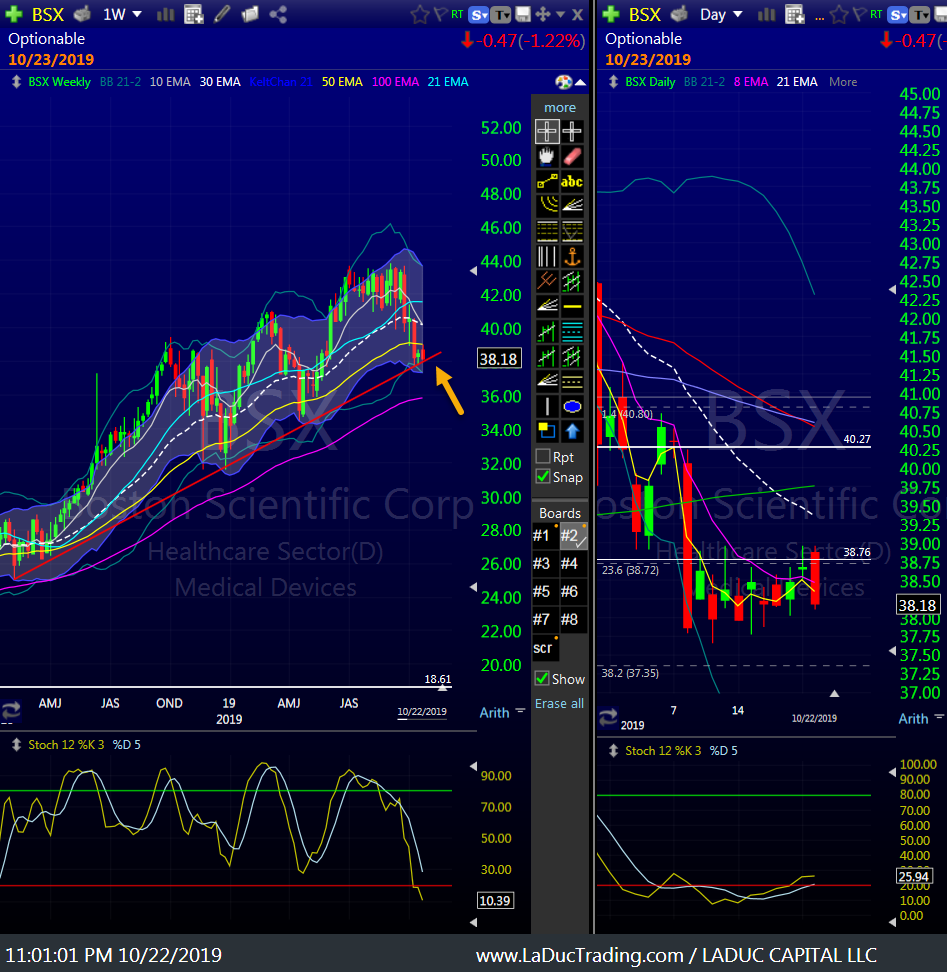 Volatility, Direction and Time are the three most important components of choosing an option. Expected duration of a trade guides the choosing of an option expiration date. I have learned it doesn’t hurt and often helps to add more time than you think is needed. Generally, I employ Directional (naked) Options in high-probability directional trades expecting increased volatility. Option Spreads are employed for gradual volatility in directional trades. Combination option tactics (ratio backspread, financed spread, butterflies, etc) are most beneficial for event-driven trades as well as for ‘set-it-and-forget it’ type swing trading to capture a trend further out in time.

Most often my options are bought (not sold naked), at the money with highest gamma, or out-of-the-money strikes based on projected price targets. I trade primarily three timeframes:

Chases are largely news/event driven trades or volatility technical patterns that last a few ‘days’, sometimes just hours. Momentum drives the price action, which can be volatile, so active management is required. Samantha will share chase ideas in her LIVE Trading Room as they happen, calling out and/or annotating charts with entry, stop, profit (ESP) targets. Swing and Trend trades will be posted in the LIVE Fishing Plan (Google Doc) and Trade Log (Spreadsheet).

Trailing stops can be based on percentage of profit/loss of an option, the price level of the underlying, the theoretical price of the option at profit/loss targets… but in most all cases, the CLOSE of the underlying at its moving average guides the trade exit: 3D for Chases, 8D for Swing, and 21D for Trends.

Ideally, we want to use a Macro-to-Micro backdrop to get into a trade but a Micro-to-Macro approach to get out of a trade. By that I mean, when successful, we want to roll profits into further out-dated, higher-priced options, convert directional plays into spreads to protect profits, all the while taking partial profits/adding to positions along the way. We want to turn a profitable Chase into a profitable Swing into a profitable Trend while being mindful that losses are not to be feared but managed.

Consistency sounds boring and trading is neither consistent nor boring. But if we consistently manage our winners and our losers than the results will take care of themselves.

LaDuc Trading/LaDuc Capital LLC Is Not a Financial Advisor, RIA or Broker/Dealer.Trading Stocks, Options, Futures and Forex includes significant financial risk.We teach and inform. You enter trades at your own risk. Learn more.© Copyright 2016 LaDucTrading™. All rights reserved:No content may be copied, recorded, or rebroadcast in any form without the prior written consent of LaDuc Capital LLC®.