Going into July, I was bearish USD, bullish market and bullish Precious Metals – specifically Gold with Silver and Miners (but also Palladium and Platinum as discussed regularly in my live trading room). Here’s how that market timing call came to be from my Intermarket Analysis and where we are now that the month of July has closed.

My call from July 1st:

US Dollar Weak But Not Sick

Assuming the downward drift in USD continues, US markets should be supported. Any sudden shock higher in yields or dollar, however, will change that. 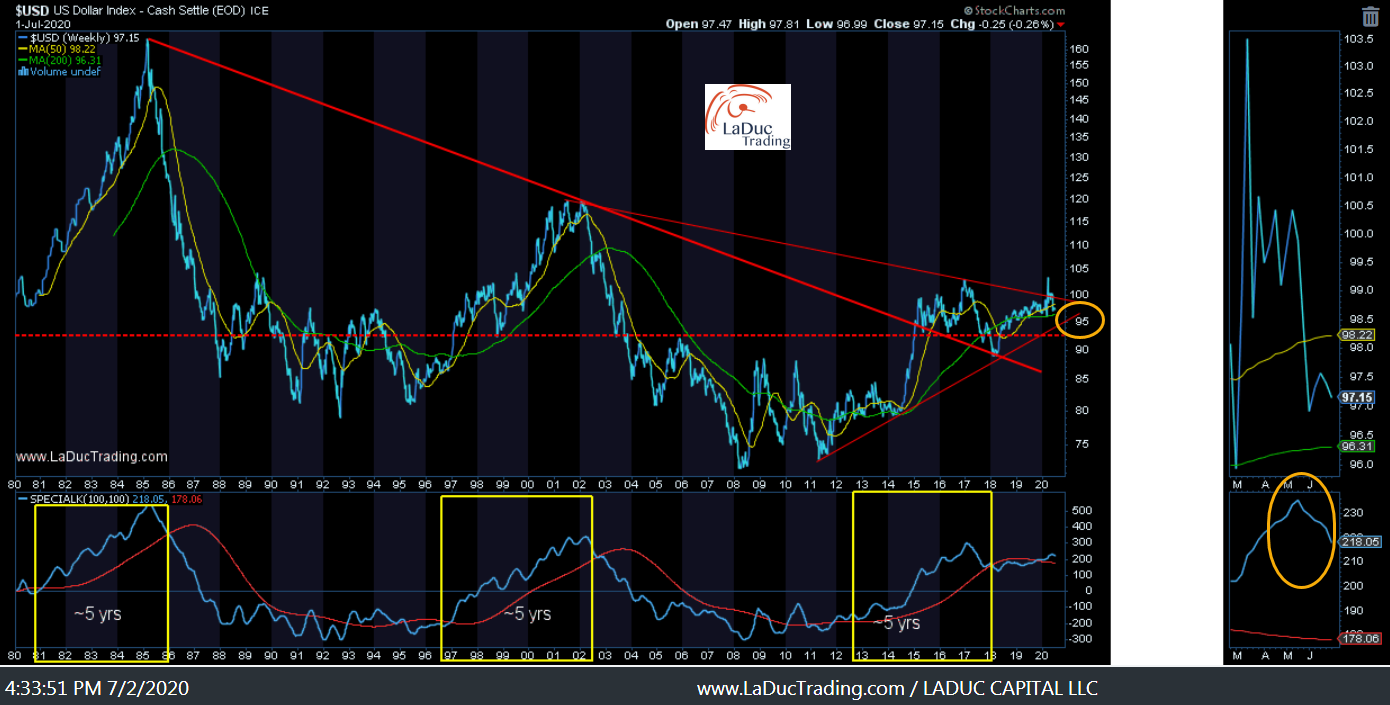 We had zero shifts higher in either yields or USD as the market waited for Big Tech to report and Fed QE liquidity made its way onto trading desks. But here we are: FAANMGT have all reported and specifically AMZN, AAPL, MSFT have contributed to 65% of the Nasdaq advance this year! But now that we are through these market-expected beats, what’s next?

Dollar makes the weather, and the weather for August is windy, but could bring a cold spell for dollar bears as market looks ready to follow through on an early USD bounce.

Nice way to start the new month: the US Dollar bounced on the first trading day of August after softening all through the month of July. Here is a chart taken after market close Friday. Not ironic that the USD bounced on trend-line support, not to mention the monthly support level in UUP is at $25.21.

The question now is how much farther bears can press before the record highs in Euro longs take profits? From a weekly perspective, the USD – which makes up 56% of the Euro basket – has reached double-weekly support (yellow arrow) and yet the bottom panel shows my smoothing indicator still pointing lower. My guess for the dollar bounce is bumpy not  smooth – just like our election news cycle. 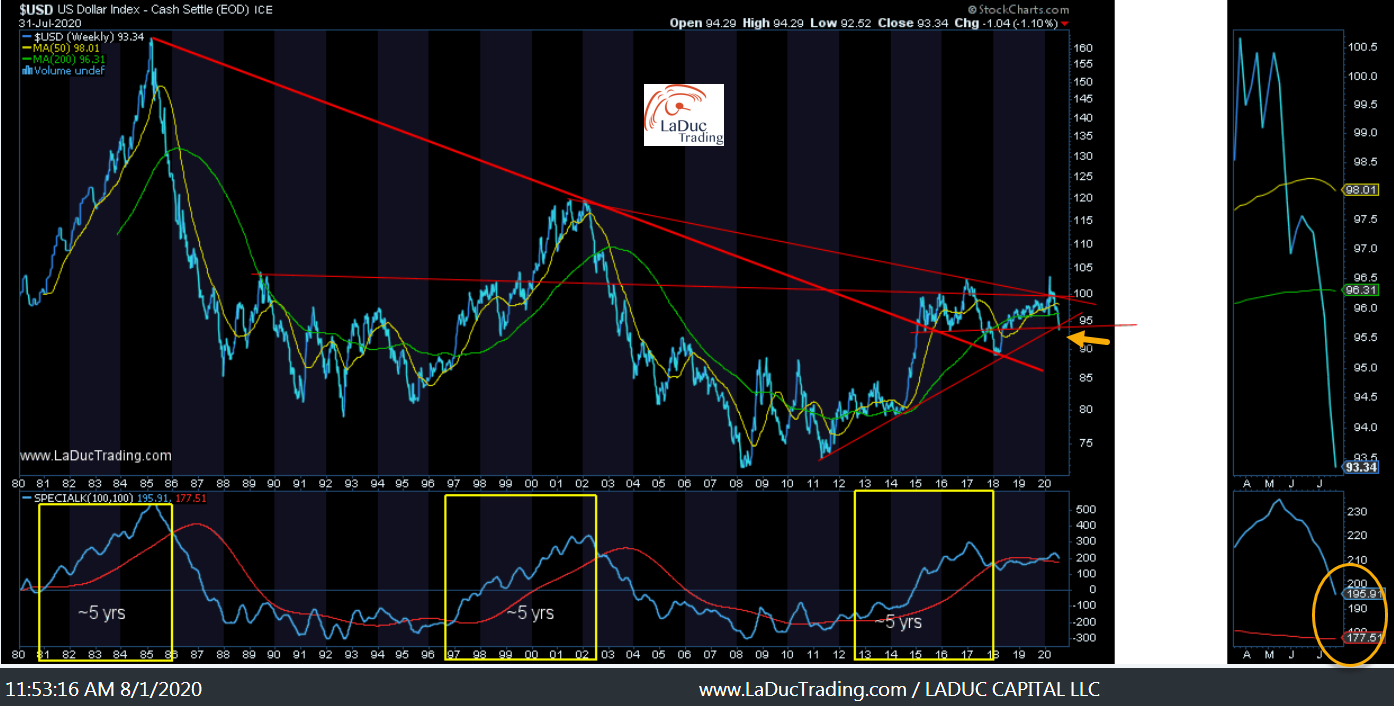 And as far as the Euro is concerned, it has traveled far in a short time … and yet my FXE Euro currency ETF has not yet tagged price target of ~$112,50 (yellow arrow, red horizontal line). It did make an impressive run to and above the 200W as Growth and Momentum Tech plays have advanced on dollar’s decline. Here’s the problem:

“We have massive short positioning against the dollar, and massive long positioning in favor of the euro. Every time this has happened the dollar has come out on top.” #BNNBloomberg @Quillintel 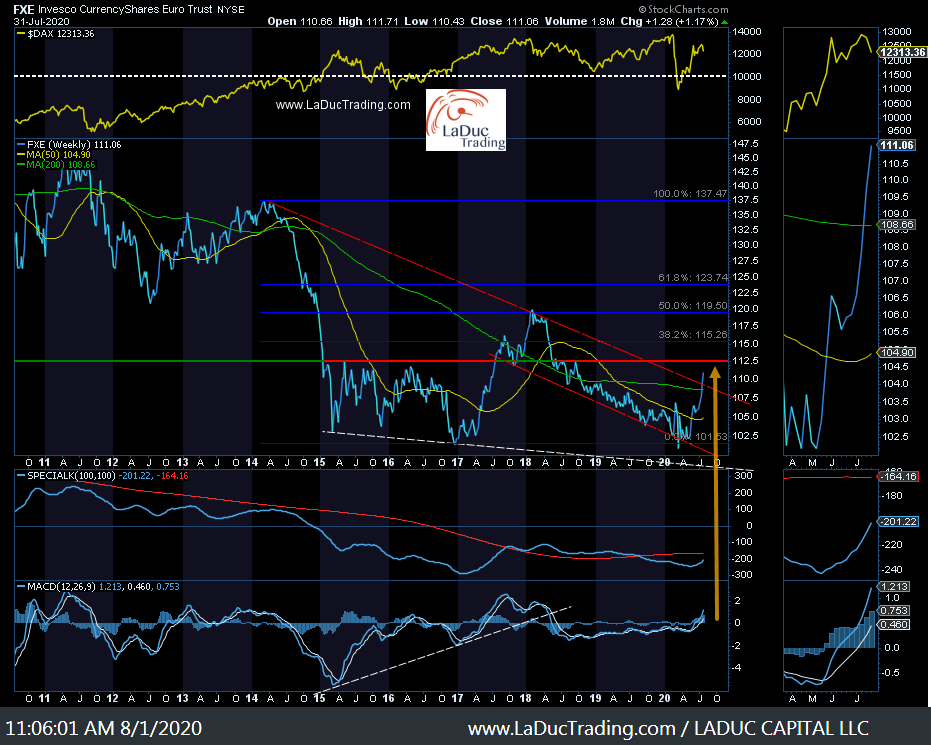 As for Gold, Silver and Miners – it perfectly matched my expression and sentiment of “Gold is the new VIX” – as VIX sold off since June 12th and has stayed pinned at or below its 200D and monthly support of $25.20.

Yes, Gold and Miners are still extremely overbought. And yes, they can stay that way for awhile. 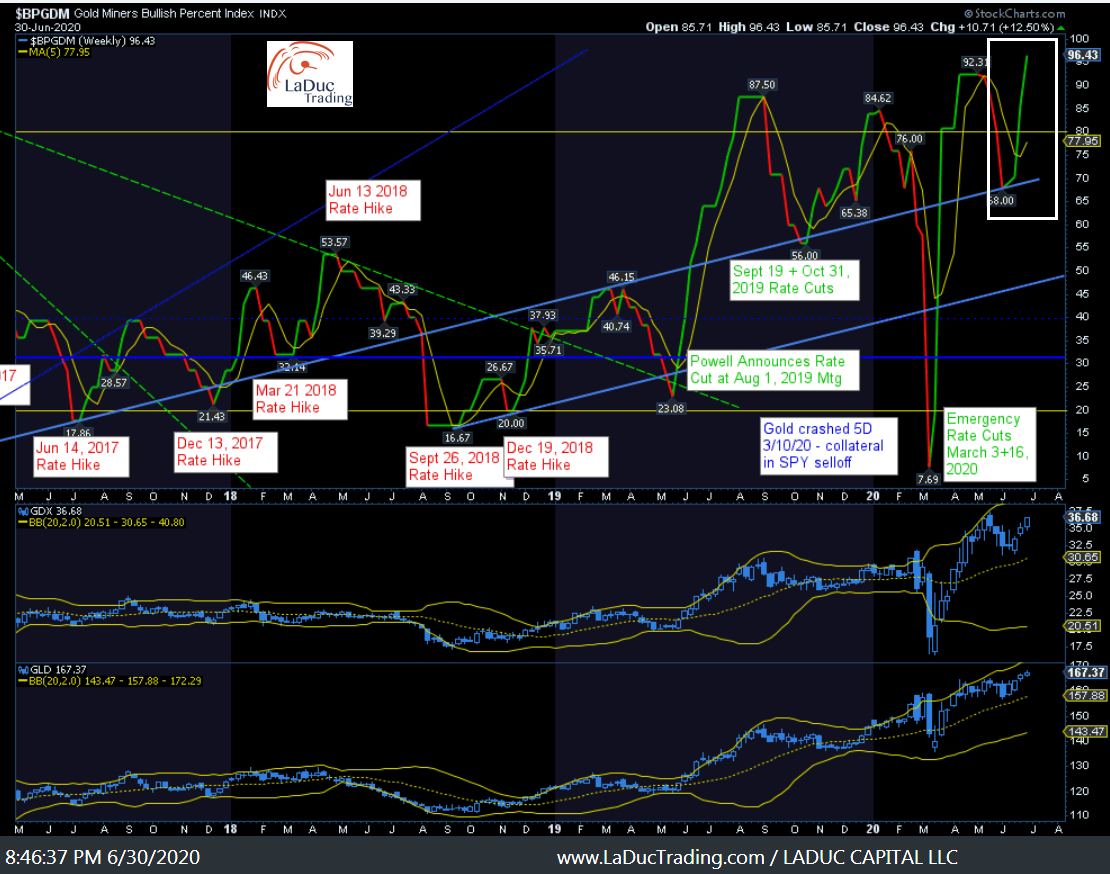 Here was one of my arguments to be bullish Gold past few months 🙁Elliot Letter, 4/16/2020)

Fanatical debasement of money by all of the world’s central banks, super-low interest rates and gold mine operation and extraction issues (to a large extent related to the pandemic) should create a fertile ground for this most basic of all money and stores of value to reach its fair value, which we believe is literally multiples of its current price. In recent months, gold has gone up in price to some degree, but we think that it is one of the most undervalued investable assets existing today. There is nothing else that has its historical and fundamental characteristics, and we think that it is only beginning its inexorable, but impossible to time and place boundaries around, uptrend. The fact that it is so under-owned by institutional investors is astonishing to us in light of the obsessively inflationary policies being pursued by central banks around the world.

That was then. This is now.

I would now start to take care to protect longs as this is the first Gold Miner’s Bullish Percent Index reversal signal I have received since highlighting this bullish Gold trade in my June client post  – after calling out it would be defended after the March sell-off (indicator showed extremely oversold just before the two emergency Fed rate cuts).  Basically, my call to stay and press long over the month, reviewing daily in my live trading room, has now firmly shifted from Green to Yellow – meaning caution. It would be prudent to tighten stops and prepare for a pullback.as we have traveled higher and higher past month with my Gold Miners Bullish Percent Index forming a double top at 100  (as high as this can go) and now  crossing down through its 5W MA on a weekly chart. This indicates to me: profit-taking is dead ahead. 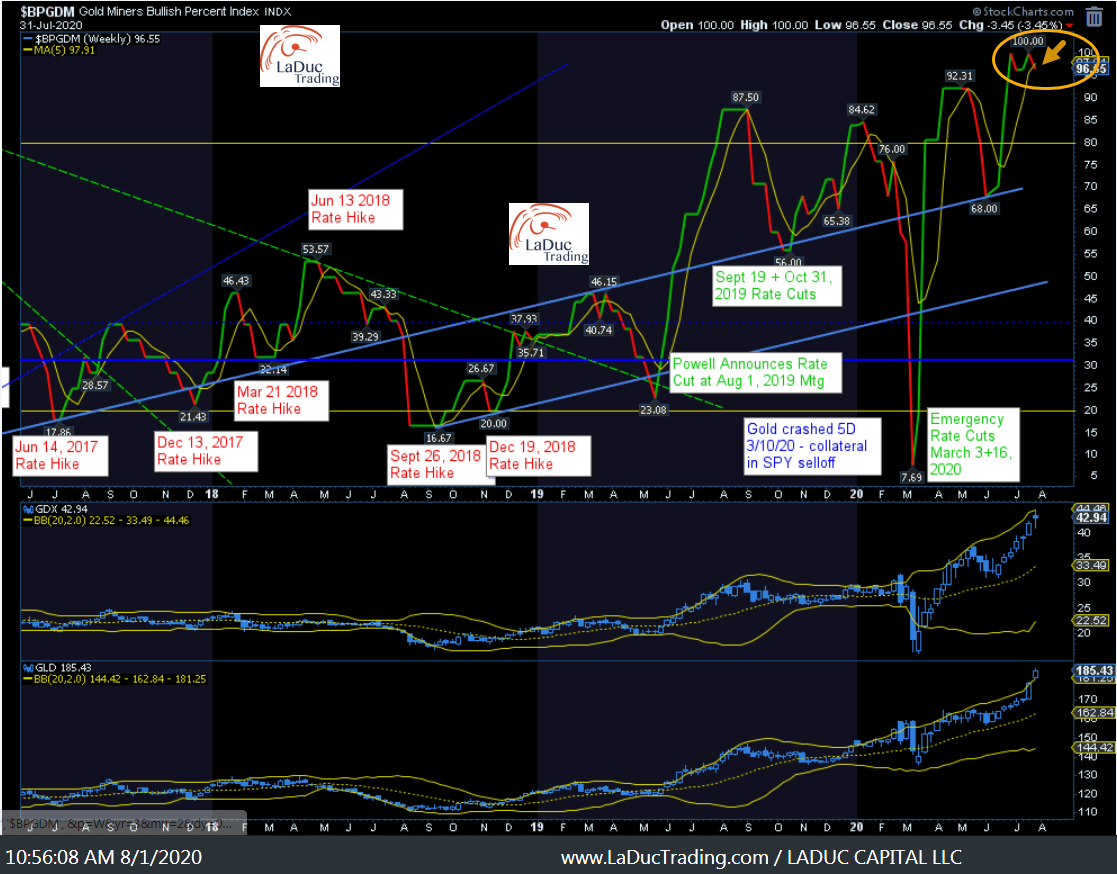 And just to follow up on my client call for Silver: 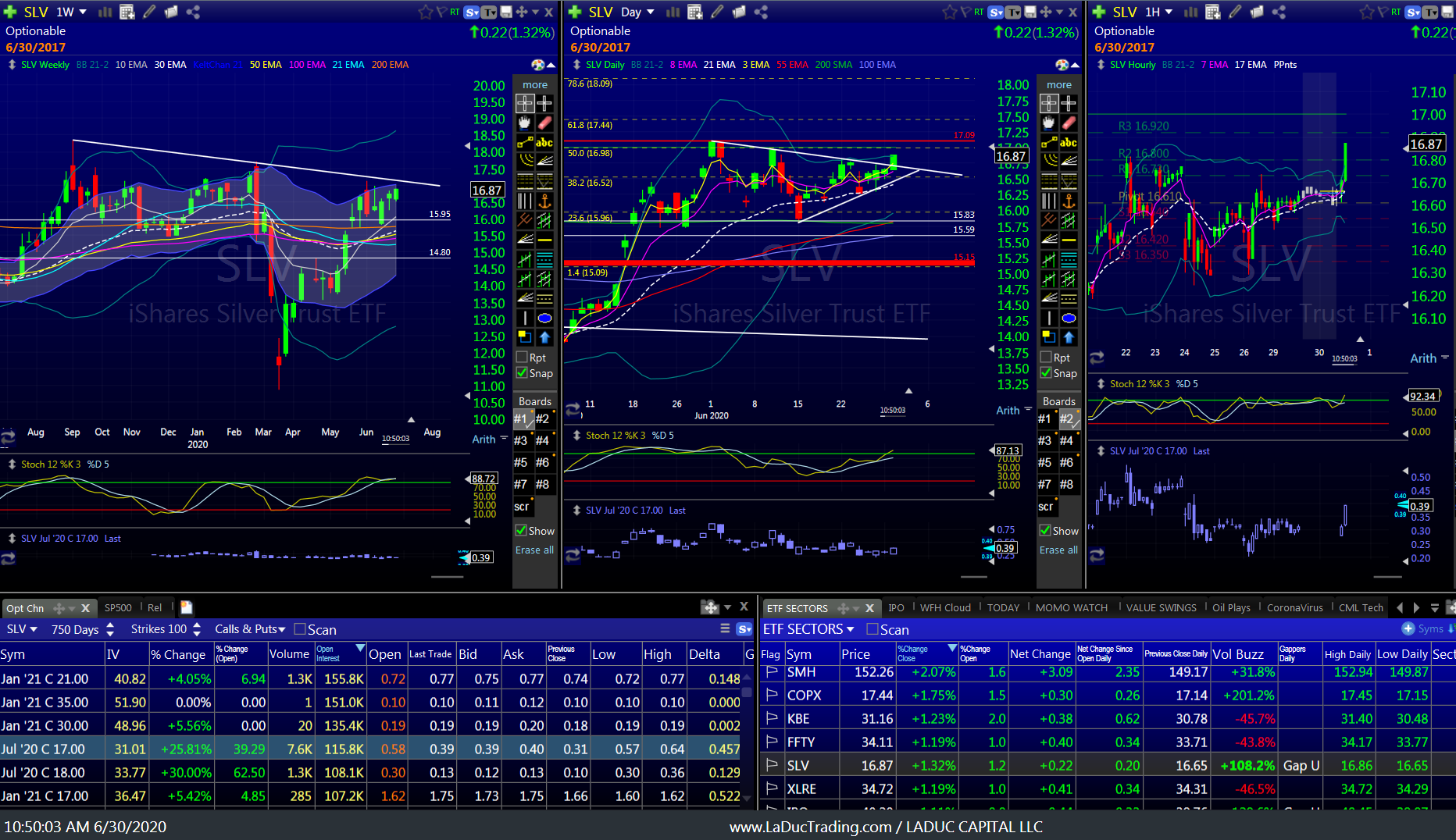 And here we are now:

Yes, Silver can absolutely run hotter for longer in the big scheme of things, but first I expect it takes a rest.

Helped me guide clients for the last -27% pullback. But I timed the Thanksgiving carving when oil dropped 13% and I see risk rising for that again. #OOTT

@ZacharyLRogers @GasBuddyGuy @JLeitchOil very nice piece Zach, we try not to confuse "it won't work" with the political realities of "let's try it", the battle is between The Invisible Hand and The Interventionist Hammer, in Biden's case the nail to hit is higher energy prices, interesting period ahead

In 1966, 5% of US corporate profits were booked in foreign tax havens.

Inflation is sticky AND political and will drive yields higher if nothing else than to cool housing prices / rents / CPI.