Clients know I have been calling a Growth-to-Value rotation since last April and again spoke directly to its continuation when invited 1st of year to present my StockChartsTV 2021 Predictions.

Here was my confirmation that the rotation was about to explode higher when on October 9th, 2020 I wrote:

The 10yr treasury yield is now 1.6% and with it much higher Oil/Energy, Financials, Commodities, Cyclicals, Small Caps…

I doubled down after the presidential election and Pfizer vaccine announcement November 9th when I wrote this for clients November 17, 2020:

Short Covering Can Cause Trend Reversals

I have been saying and writing for months that Q4 would be when the Growth-to-Value rotation trade takes place in earnest. I just didn’t think it would happen all-at-once last Sunday when Pfizer announced a potential vaccine for Covid. Nonetheless, the rotation is on and has caused large short covering. Short covering does not a trend reversal make, but it can be the start of a trend reversal… 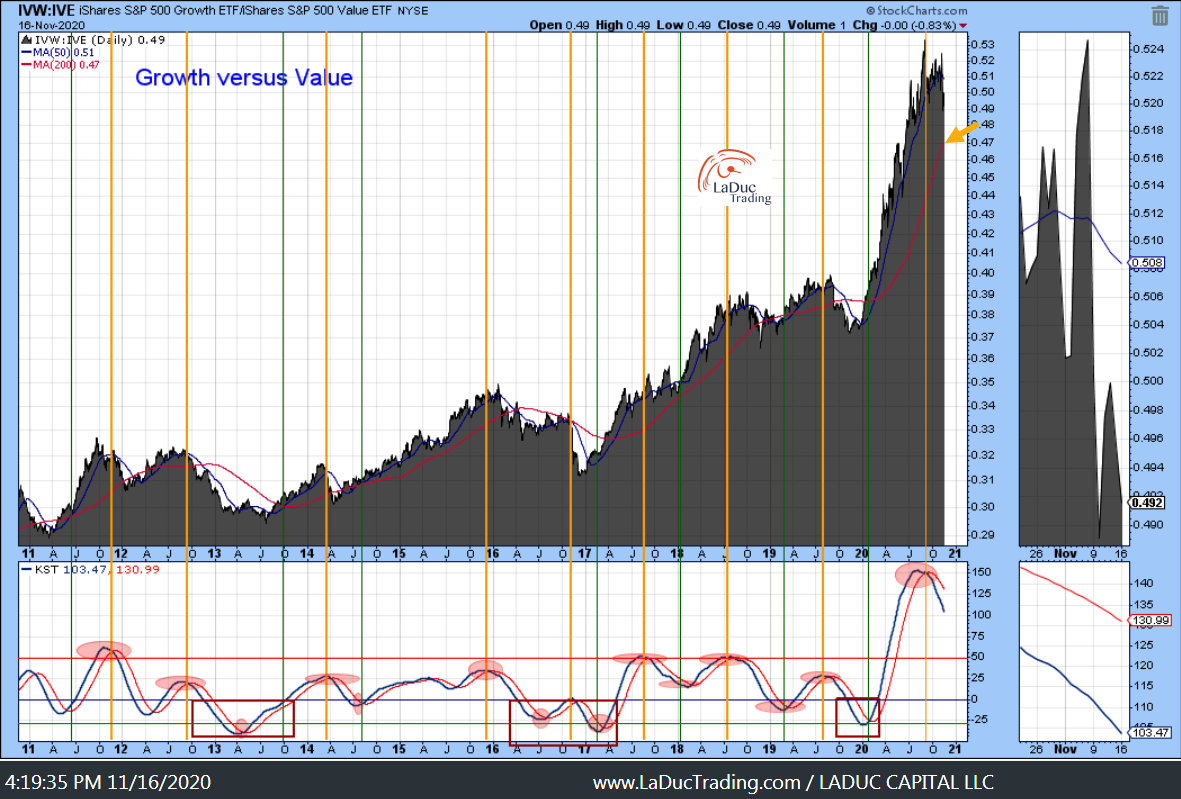 Fast forward to today: We have come a long way in the Growth-to-Value rotation, but are we done? My intermarket analysis says, shockingly: NOT DONE. 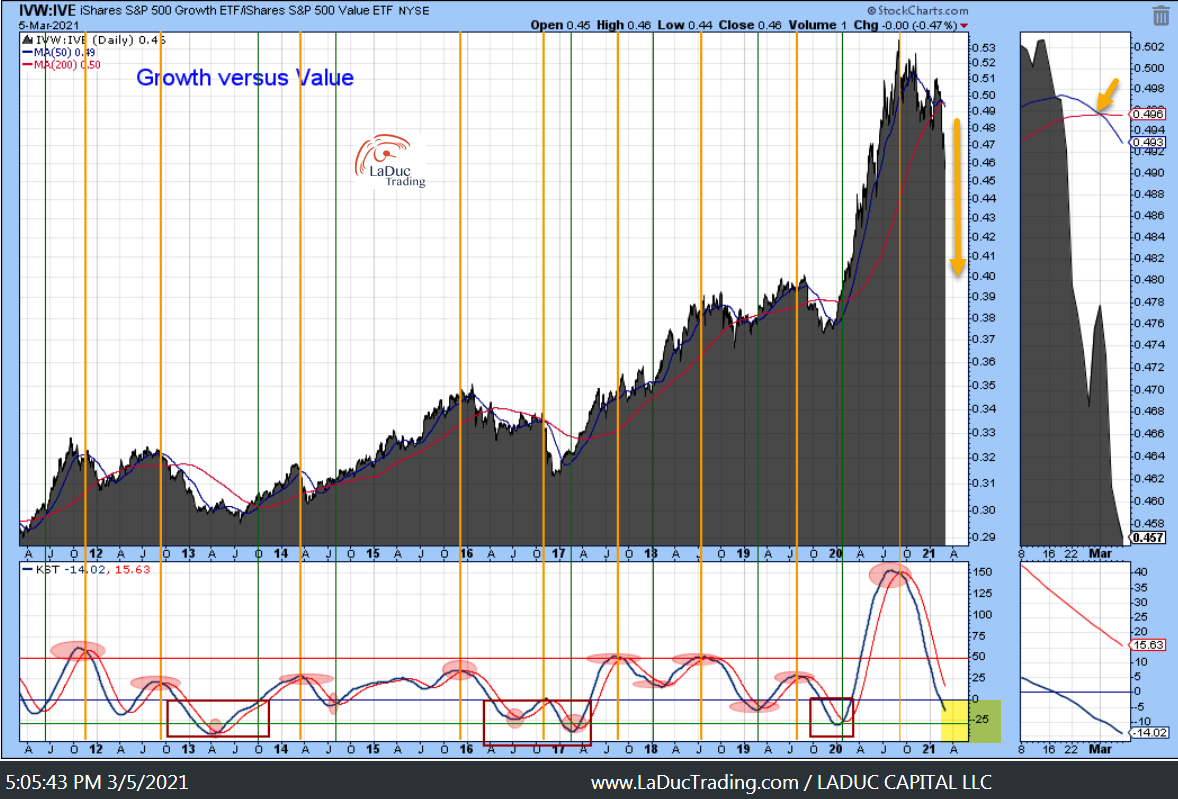 I have shared with clients my intermarket analysis which helped me time the run up in crude to $60 and helped me even call the slight pullback of 7% into beginning of last week, BUT then Oil spiked above my $65.65 ‘line-in-the-sand” Friday and it merits a “Pivot On Oil” client post.
Sometimes the moves at the beginning and end of a rotation are the strongest, but in Oil’s case, despite the weak fundamentals as Robert will highlight this Thursday at my Macro-to-Micro Power Hour, I think this Energy move has strength to continue much higher than many suspect. Yes, the push above resistance at $65.65 (last price high in 2019 after the drone ‘attack’ on Saudi Arabian oil facility) was very strong, and with it the E&P stocks exploded higher. Curiously, the price surges this week in the oil complex names were bigger than at any other time in this rotation cycle since the spike low in oil last May – which includes the deep freeze last month in southern states which shuttered refineries.
So either this $65.65 is a ‘fast break-out, fast failure” kinda play, or Oil is going to move higher and I’m betting “if $80 then $100” so possibly $130 could be seen (and felt).
Yeah, you read that correctly… IF Oil stays above $65.65 it can double. That can even happen as USD stays firm or even rise to $95 area (and Gold falls to $1600/1500 area – another call I made back in August 2020).
Let’s first have a look at some of my bullish intermarket charts then review the political, fiscal and monetary policies that are at play to support higher Energy prices.
This chart has been posted repeatedly for clients – both in written commentary and under my Intermarket Analysis Slack channel. In short, it continues to deliver on my previously-called inverse head and shoulder patter on this weekly time-frame. This has served as confirmation technically that Oil, along with Oil & Gas plays, would perform better than SPY. 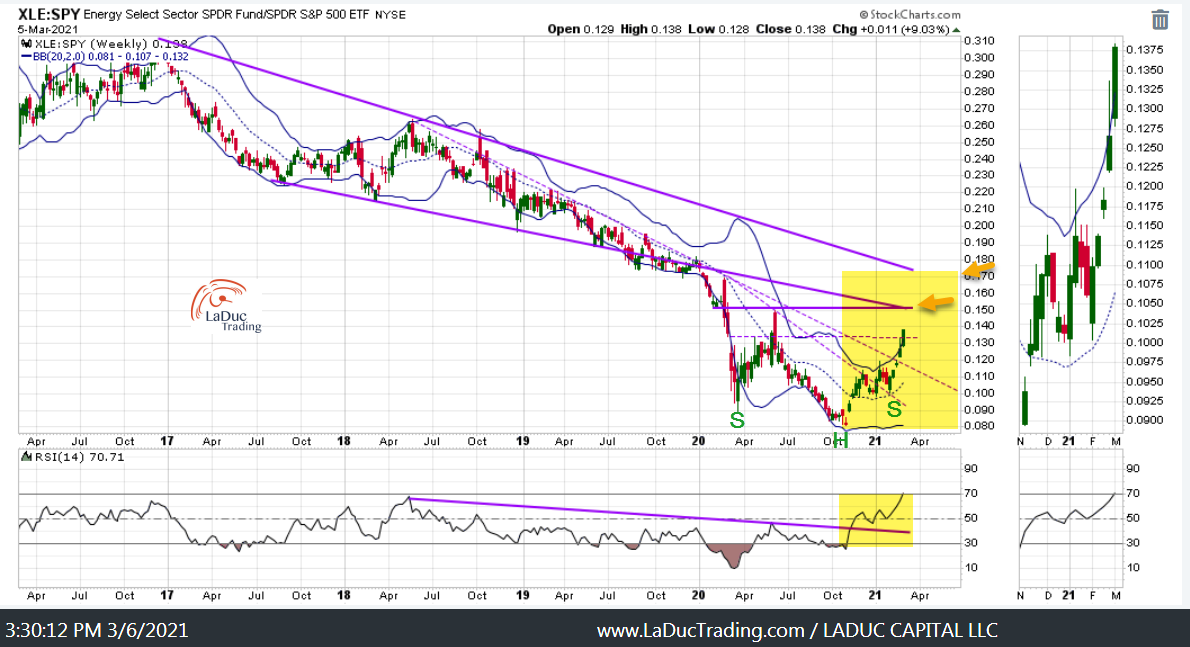 Here is another perspective and updated chart of my XLE:SPX intermarket analysis read that helped me time the moves higher in Oil and Energy plays (yellow arrows bottom panel). It’s still bullish and did not slow at resistance (purple arrow) 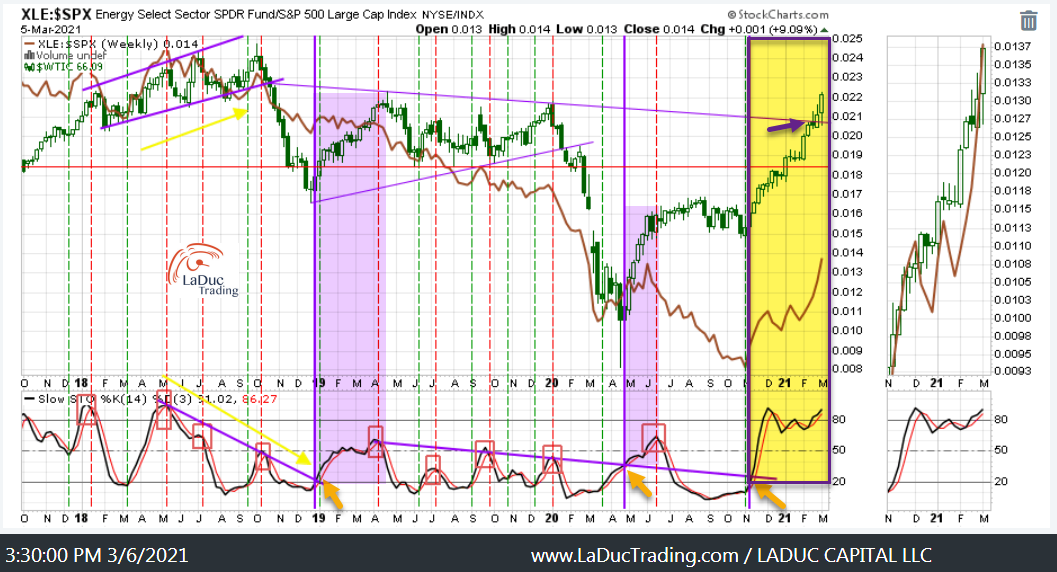 Technically, I expected and called for an oil reversal Feb 27th when Crude tagged $60. It did pull back 7% before exploding higher this week above my line-in-sand $65.65. We even closed above on a weekly time-frame so, technically, above is bullish, below is not.

In the meantime, we have also seen a Tech Wreck of late wherein many prior high-fliers are down 30-40% past month, including momentum favorite TSLA and the momentum ETF poster child of 1999-style valuations ARKK.

Most do not realize that cash dividends on stocks have historically represented, in real terms (after inflation), approximately 75 percent of stocks’ long-term total return. So as inflation expectations have risen strongly since August, with yields, we have a rotation into value that is picking up steam as Tech offers no dividend protection at a time when higher inflation drives nominal and real earnings growth lower.

When we take inflation into account, the importance of dividend income is magnified even further. During the past century, the average rate of inflation was 3.3 percent per year reducing the nominal 5 percent earnings growth rate to a real growth rate of just 1.7 percent. Thus, the inflation-adjusted return on stocks was not 9.6 percent, but 6.3 percent. In real terms, then, dividend income has accounted for almost 75 percent of the annual investment return on stocks.

And this is my thesis of why Energy stocks (and oil spiking) dominates over other commodities in the CRB index (and has received the lion’s share of recent out-sized performance). In an nutshell, Oil rises when CPI above 2% and CPI is rising. Remember my recommendations during this Energy run for clients:

Well crack spreads are widening with this oil rip because the implication is that gasoline will go up even faster than oil and this will drive a feedback look of making CPI rise faster. And now remember the ARKK holdings are comprised of high-growth, zero dividend names that have been sold off viciously in the past few weeks, and despite anticipated strong bounces once Nasdaq draw-down slows, I am not expecting out-performance from this group as my theme for this growth-to-value rotation that I have written and spoken about to clients since April 18th is still in play.

Something else happened this week that is noteworthy from a political point of support for higher energy costs: Biden and Saudi Arabia tensions.

OPEC+ decided to keep a tight limit on oil production next month, sending prices soaring in a market that had been expecting additional supply.

And US Shale producers are not likely to increase production to offset price:

“The severe drop in activity in the U.S. along with the high decline rates of shale and the pressure from the investment community to maintain discipline instead of growth means in my view that shale will not get back to where it was in the U.S.,” Occidental Petroleum CEO Vicki Hollub.

Translation: Gas at the pump is likely to rise…

“Pencil in a $10/barrel rise per month. At that pace, oil prices could reach $100/barrel during the course of the summer. That’s the message the Saudis and Russians want to send to the Biden administration…” Towards $100 Oil?

The following is an excerpt taken from Michael Kao of @UrbanKaoboy – commentating on the recent Saudi Arabian decision:

OPEC+ meeting “was a shock.” Especially notable: SA’s decision to roll over its voluntary cuts. With 6 months of consecutive supply draws, YE’21 global inventories will be below the OPEC+ “safety stock” target of 2.75B bbls. This has led to serious price spikes in the past.  BUT, the only reason oil is flirting with $70 now is artificially inelastic supply, as demand recovery still has a way to go before hitting pre-COVID levels of 100.6 mmbpd vs 94.8 mmbpd currently.
Jet fuel demand, notably, is still 45% off-line and will be the biggest forward driver of oil demand recovery. Most other distillates have caught up to pre-COVID levels of demand.
As I’ve been tweeting, the geopolitical shift under Biden is significant. Lakshmi agrees. Obama/Biden Admin was overtly pro-Iran; Trump Admin flipped to pro-SA. Now, Biden/Harris seems to have flipped back to pro-Iran at least rhetorically.
…there seems to be real resolve for OPEC+ to keep supply artificially inelastic, as it saw what happened when it did the opposite last year. OPEC+ senses that the policy shifts in Biden Admin are putting the US in a “checkmate” situation, potentially setting up a vicious cycle for the consumer but a virtuous cycle for oil.

Lastly, US “Joe Consumer” is just on the precipice of feeling significantly higher gasoline prices, so expect this to manifest in CPI numbers over the next several months.

JPM confirms, “Commodities returns, energy in particular, are strongly positively correlated with US CPI, making the asset class one of the preferred options for hedging inflation.” 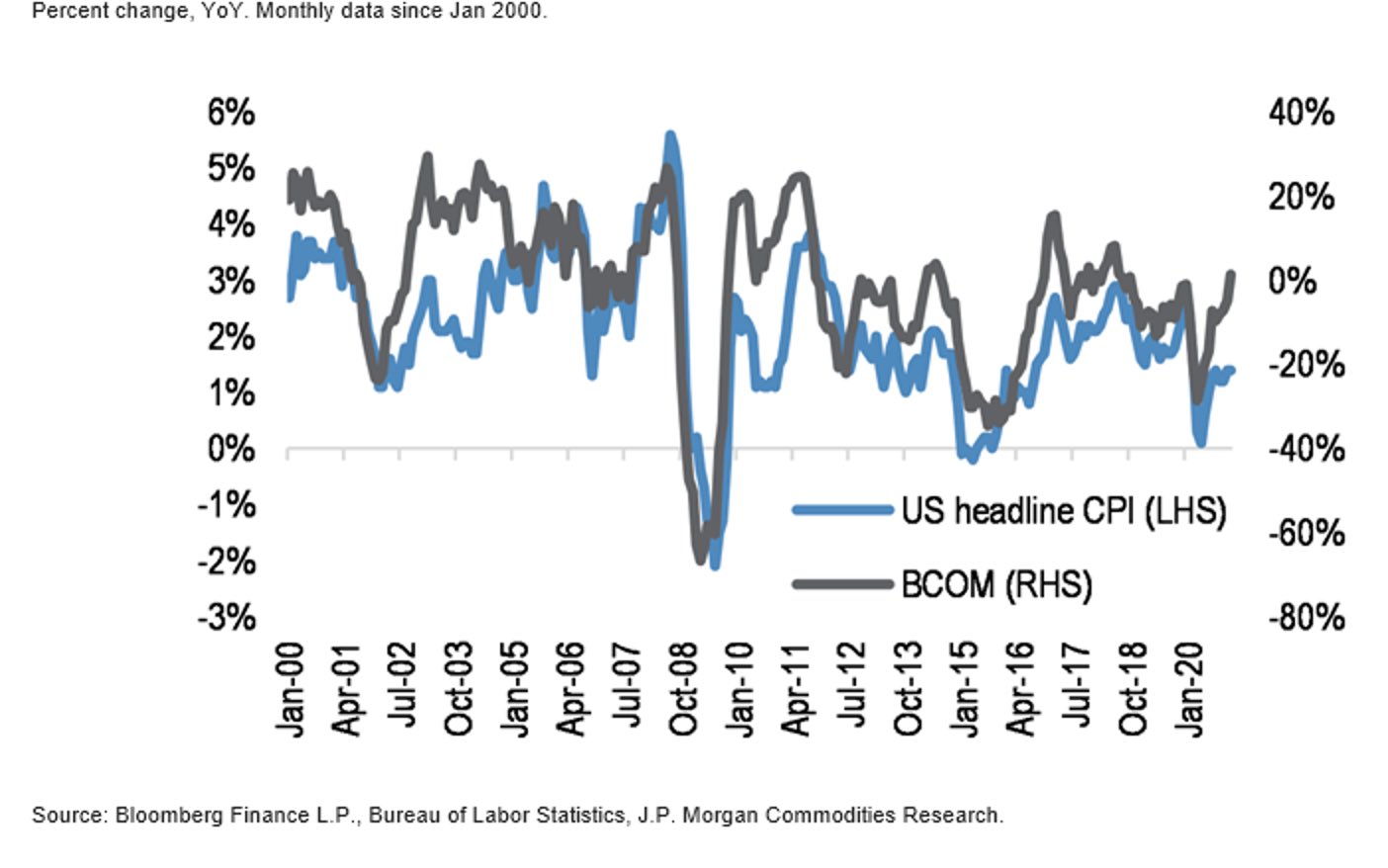 JPM further demonstrates, “Taking into account current valuations and carry, the overall BCOM Index, Agriculture and Energy are among the best cross asset inflation hedges at the moment and offer a better hedge than base and precious metals.” 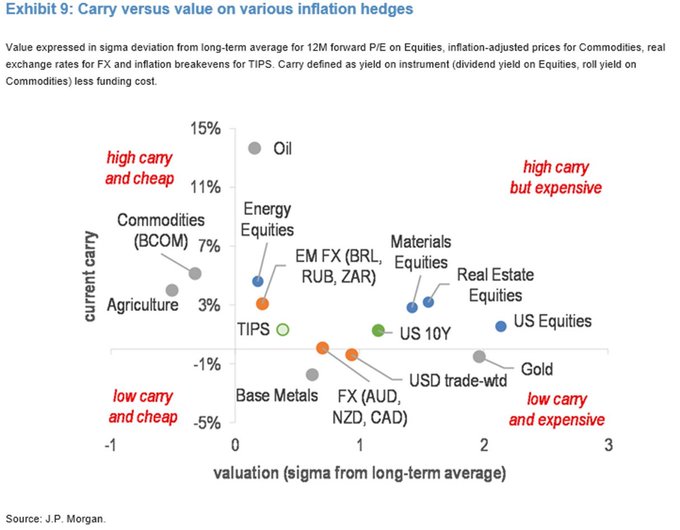 And energy dominates other commodities when CPI > 2%. 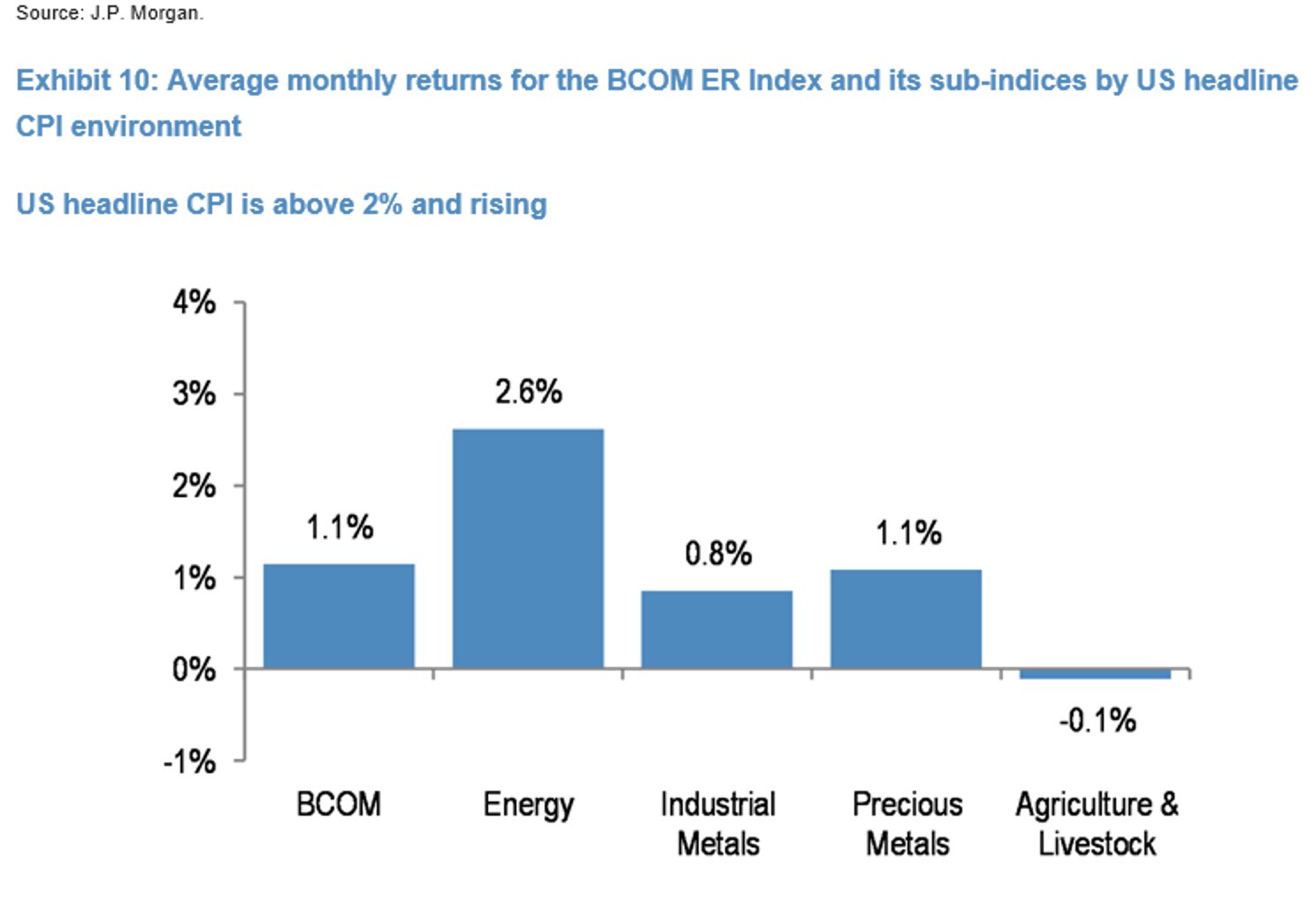 On top of this historical precedent, we have modern-day fiscal and monetary ramifications. Congress just passed the $1.9T stimulus bill. Look how much benefits commodities?
Crude Oil-Stimulus Disproportionately Benefits Commodities: 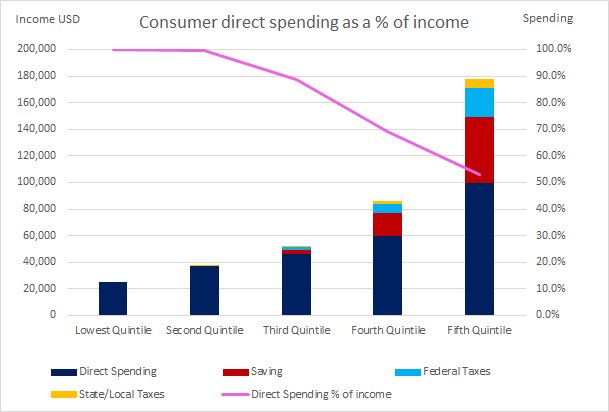 Backwardation As Predictor of Oil Price

… historical contango-to-backwardation flips… in 7 out of 11 such scenarios since 1988, spot prices were significantly higher in the following year.
Notably, in the 4 scenarios where prices went DOWN, they were all explainable by exogenous demand shocks: 1) end of Gulf War in 1991, 2) Russian crisis in 1998, 3) Iranian waiver rug-pull by Trump in 2018, 4) COVID demand collapse in 2020. Michael Kao

Add to this story that Crude Oil-Another Story of Supply Inelasticity is meeting vaccine rainbow/re-opining demand resurgence and backwardation as a great predictor of future spot, and we have a perfect storm brewing for much higher oil prices.

The entire point of this post is to highlight that, big picture, the Growth-to-Value rotation does not look done – from a macro, intermarket, or technical perspective. From my updating of intermarket analysis charts in client’s slack channel, you can see my thesis that higher yields and a steepening yield curve does not look done. With federal deficit as percentage of GDP at 20% (!), inflation does not look done, nor does the active hedging in the ‘reflation’ trades from the threat of higher inflation. Rising real yields as a result of higher inflation (and/or inflation expectations) will create pressure on Tech plays and support the rotation/bid into Energy/Commodities/Oil as a hedge. And along this vein, “Taper Tantrum” in bonds does not look done and that creates an entire new paradigm of market risk and rotation (as discussed in my Nov 10, 2019 article: Bonds Are Stocks Without A Circuit Breaker)

It’s going to plan perfectly when bonds roll over, structurally forcing rates to pop, then oil spikes with the Reflation trades (think inflation spike), while Momentum stocks are sold off because they’re overvalued relative to Value…and cause indices to correct. This move could be quicker than folks think as liquidity is ‘challenged’ in bond sell off and Volatility in the bond market spills over into equities.

To a degree, this has already begun as bonds have fallen 20% since August 2020 and Energy is out-performing Tech by a large margin since then. But it is the new political, fiscal and monetary regime combined that risks market weakness, and in particular, the unprofitable, no-dividend playing momentum tech plays (SPAC and crypto too?) which has/had benefited the most in a zero-interest-rate regime. Even as Fed promises to be accommodating, market is repricing rates higher, and with it, Oil. Higher oil risks the US economic recovery, something which the Fed has little control over; and higher oil, inflation and US dollar is defacto tightening which presents a growing risk to risk assets, and why the growth-to-value rotation thesis can continue much higher than many expect.

Artificial suppression of yields is a thing.

This is a game mate - there is coordinated support from Banks/foreign CBs to finance an avalanche of new issuance due to massive infrastructure.

Come fishing with me 💃

Macro-to-Micro market commentary each trading day — what’s moving, why and how to trade any market, sector or stock across multiple time-frames!