I closed my trading room at noon and went in search of Intel that could help me form a view on headline risk versus market risk. I found a credible source I believe on the headline risk of CoronaVirus and wanted to share that with you as well as the Market Risks I see coalescing all at once. Finally, I want to check in on quant positioning as the delta hedging activites from CTAs have underpinned the market structure and action for several years now. It’s time to have a look at their levels to better position for these market risks and their “gamma flipping”.
Sick and Getting Sicker
Absent public health interventions… Dr Gabriel Leung Dean of Medicine of Hong Kong University offered up his team’s best-guess projections this morning:

Perspective: 80K deaths occurred from Flu in US (pop 327M) during the 2017-2018 flu season. It was a record and yet no city was quarantined and @WHO  didn’t declare an emergency. In this case, the risk of #CoronaVirus is based on its growing potential for peak pandemic # of cases every day because of China’s large + concentrated population.

Since Chinese authorities say the virus is not under control, the problem for markets is nobody has any idea how long this will last, how big it will get and how far it will spread. This introduces market uncertainty which breeds volatility. The irony is that the markets are faced with a Perfect Storm of Risk at the same time this lethal flu spreads.

This is a market in which Headline Risk Meets Market Risks!

CoronaVirus is Not Contained

The dean of HKU’s med school revealed research during a presser on Monday showing that the virus had already infected nearly 44,000 people in Wuhan. Meanwhile, Professor Neil Ferguson, at least the second UK academic to publicly share his projections, said over the weekend that 100,000 people could already be infected with the virus around the world, according to the Guardian.

“We have to be prepared, that this particular epidemic may be about to become a global epidemic,”

Though Leung warned that additional measures to contain the virus could improve projections, the team’s model predicted the number of infections in five mainland megacities – Beijing, Shanghai, Guangzhou, Shenzhen and Chongqing – would peak between late April and early May, and at the peak of the pandemic, as many as 150,000 new cases could be confirmed every day in Chongqing alone because of its large population and intense travel volume with Wuhan. 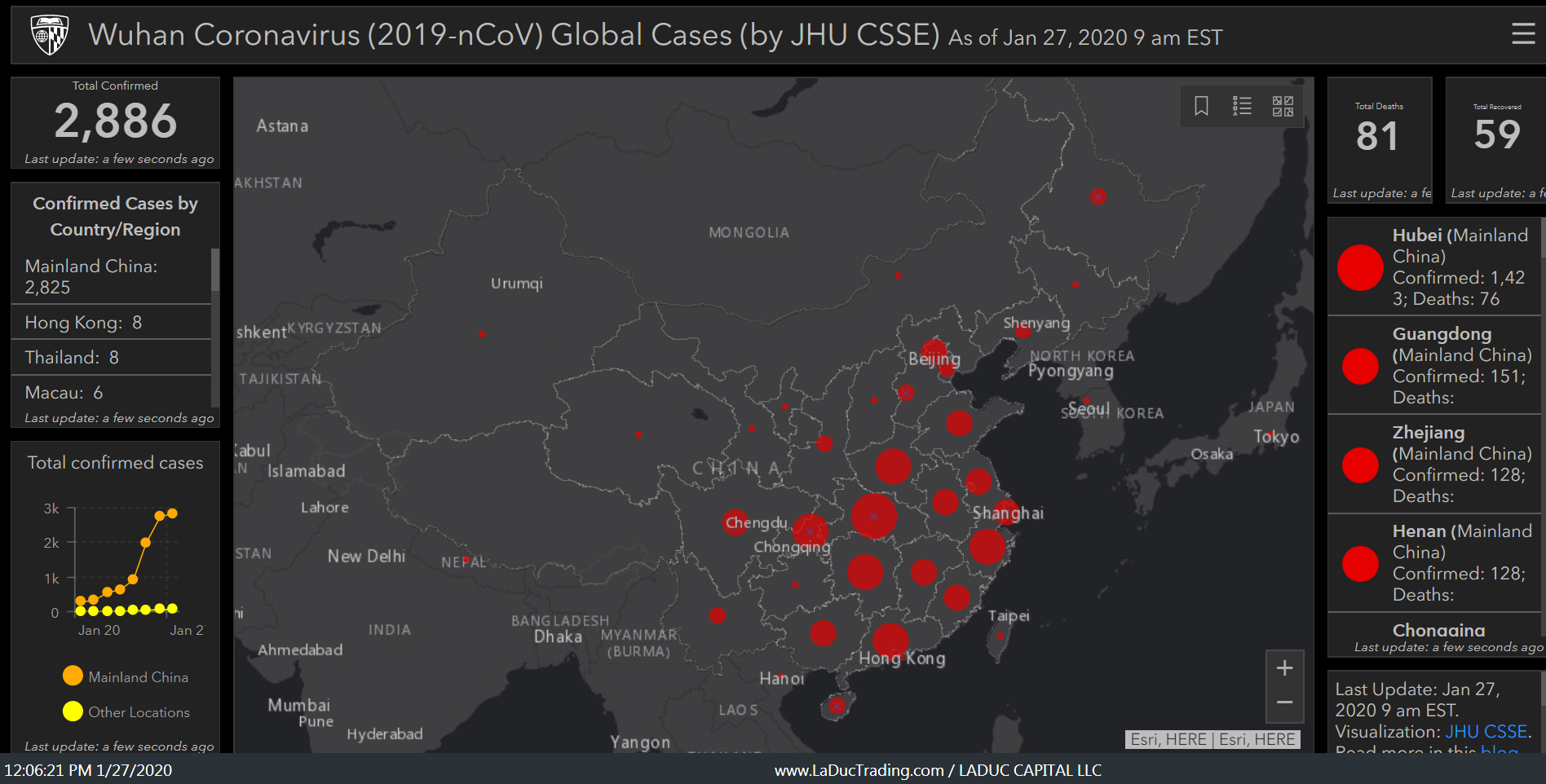 I took this picture at noon ET. By 9PM, the following update was posted…

Update (2000ET): According to the Health Commission of Hubei Province, there was a massive jump in cases and deaths overnight in China. h/t Zerohedge 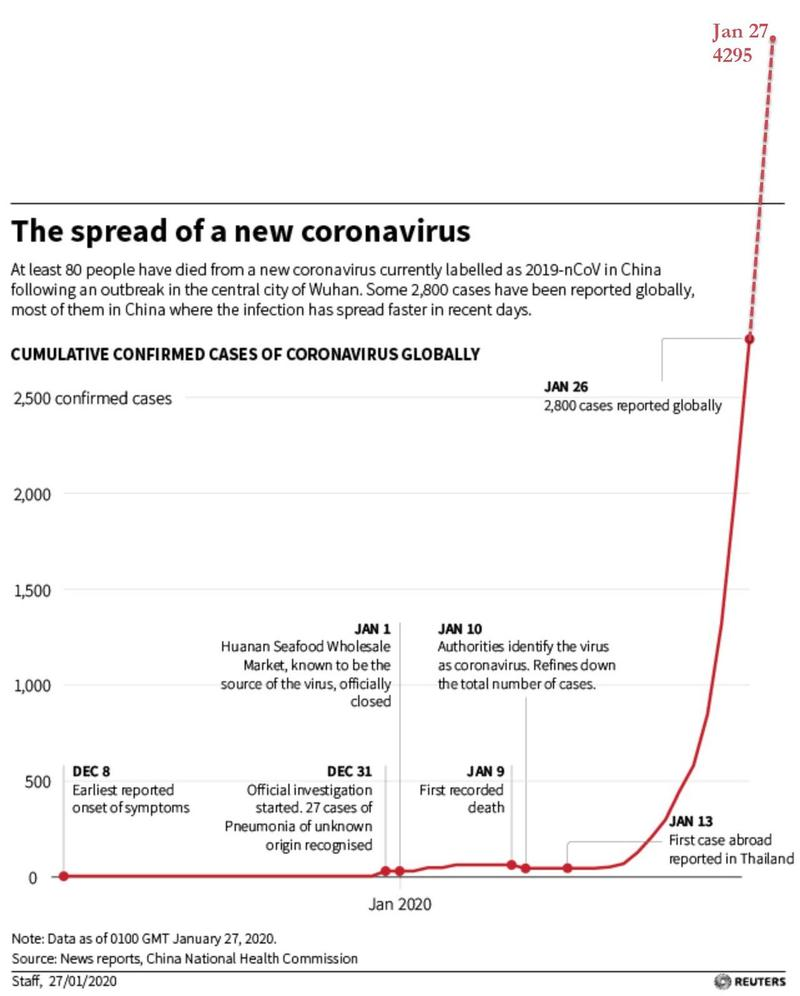 Science News published an article on “how the new coronavirus stacks up against SARS and MERS… For the third time since around 2003, a coronavirus has jumped from animals to people.” It answers everything from what it is and where it came from to what are the available treatments and how dangerous it can be. You can read it here.

As market rotated into risk-off trades, namely bonds, treasury yields collapsed, triggering a very large treasury short stop-out. 5Y Real Yields are now back to the most negative they’ve been since April 2017 – acting as a major bullish catalyst for Gold and Bitcoin.

Dealer Gamma analysis actually shows that the Dealer Gamma position has now pivoted NEGATIVE on the move in futures below 3263…meaning that the lower we go from here, Dealers have to (perversely) “short more” into the down-move to dynamically hedge.

The Nomura QIS CTA model estimates that through last Friday, the gross-exposure of the S&P Futures position for CTAs is back to “extremes” last seen in January 2018 (a nearly +3 standard deviation gross-position dating back to 2002). Question remains: how much left in the unwind?

No getting around it, today was an ugly open – as it is very rare we see an open lower of almost -60 points $SPX. In fact the market has now erased all of this year’s gains – despite the fact Nasdaq hit intraday all-time highs on Friday! So is this a one-day wonder or time to press short?

The low of today happened near the open at $3234 with VIX tagging $19 after closing at $14.56 on Friday – when folks clearly wanted to de-risk heading into the weekend before more “pandemic panic” headlines would hit. We didn’t even know Iran and Taliban would add fuel to the fire – bombing US Embassy in Baghdad and reportedly shooting down a US plane with military personnel. Trump has yet to respond on either attack. When he does, I suspect Oil will rally on supply destruction fears before demand destruction concerns resurface again.

Some US companies will likely be more affected than others:

“Disney, McDonald’s, Starbucks and other U.S. companies with significant footprints in China are suspending operations and instituting travel restrictions as they respond to the outbreak of the coronavirus.” Source: CNBC

China is 35% of luxury goods demand so expect this sector to be hit not to mention airlines. Casinos have pulled back strongly already, after tourist arrivals from China plunged 80%.

The “normal” viral drag on US10Yr has the following tendency – yields fall then bounce back sharply. 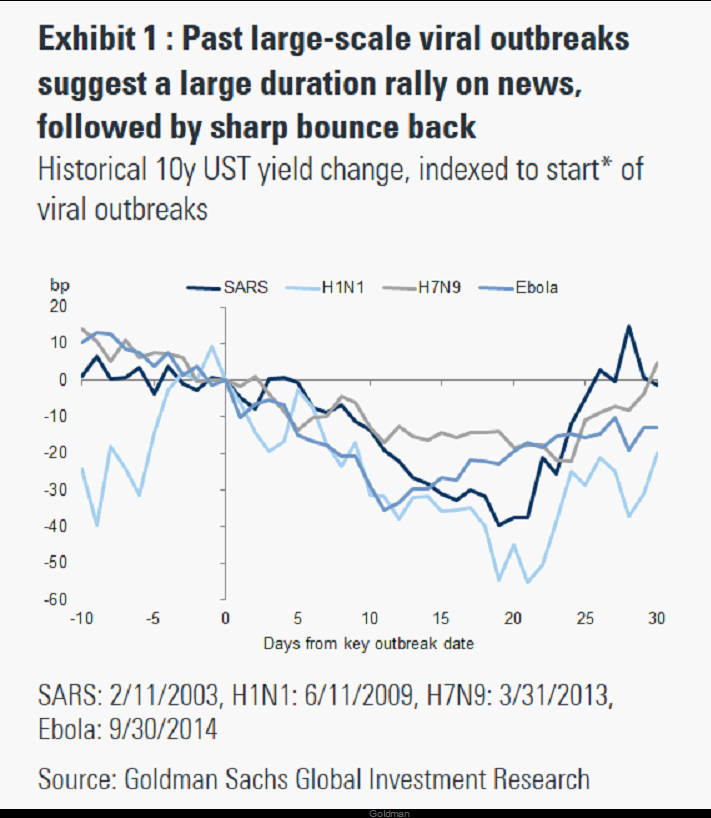 The pattern of past outbreaks is so far similar. There is a sell-off that lasts until crowd sentiment is at an extreme bearishness and the outbreak comes under control. Then it is time for a recovery. Sell-offs driven by previous epidemics have created buying opportunities.

Yields have been falling, reflecting concerns about global growth, and also the dramatic change of direction by central banks, which was itself largely driven by fears for growth. The 10-year Treasury yield is now almost a full percentage point lower than it was two years ago, and its trend is clearly downward. Indeed, if we take inflation expectations into account, the real 10-year Treasury yield has just gone negative.

According to the Bloomberg commodity indexes, industrial metals have now under-performed precious metals over the period since Donald Trump was elected U.S. president; and the price of oil is collapsing anew relative to gold. These moves only make sense if people are worried about growth. John Authers, Bloomberg

Into The Safety of the Dollar

Growth concerns have been building for a while. The last few days have validated that concern. Here’s a reminder of my January client newsletter on the USD.

Market Timing Calls from this post from Jan 21 Client Newsletter have been strong: