The US 10-year yield is chugging higher while the S&P drips lower to its 8D support – with Powell’s speech released 90 mins before the open Wednesday (i.e. 8:30 Eastern). USD bulls will argue that any rate cut would be “one and done”, but Fed has never conducted a policy easing fewer than two or three rate cuts – and this is over the past 30 years. Fed easing can cause USD strength, but I still contend, rates are likely to move higher on expectation of better economy with a rate cut.

Speaking of the USD…Currency wars are heating up, led by Trump.

Trump’s FX wars | The American president is stepping a currency war of words with Europe and China, saying they are manipulating the euro and yuan at the U.S.’s expense.

And he has a point: It was the BOJ and ECB easing back in 2104/Q1 2015 that drove the USD up. But he loses the argument when he says rate cuts will put pressure on the USD. Rate cuts won’t do much and didn’t do anything in 2014 before the first hike from the Fed.

However, given Trump’s focus on the dollar, he may resort to forcing a USD devaluation. Back in 1988-1990, the US unilaterally sold USD, Here’s a little instruction on how it was done: 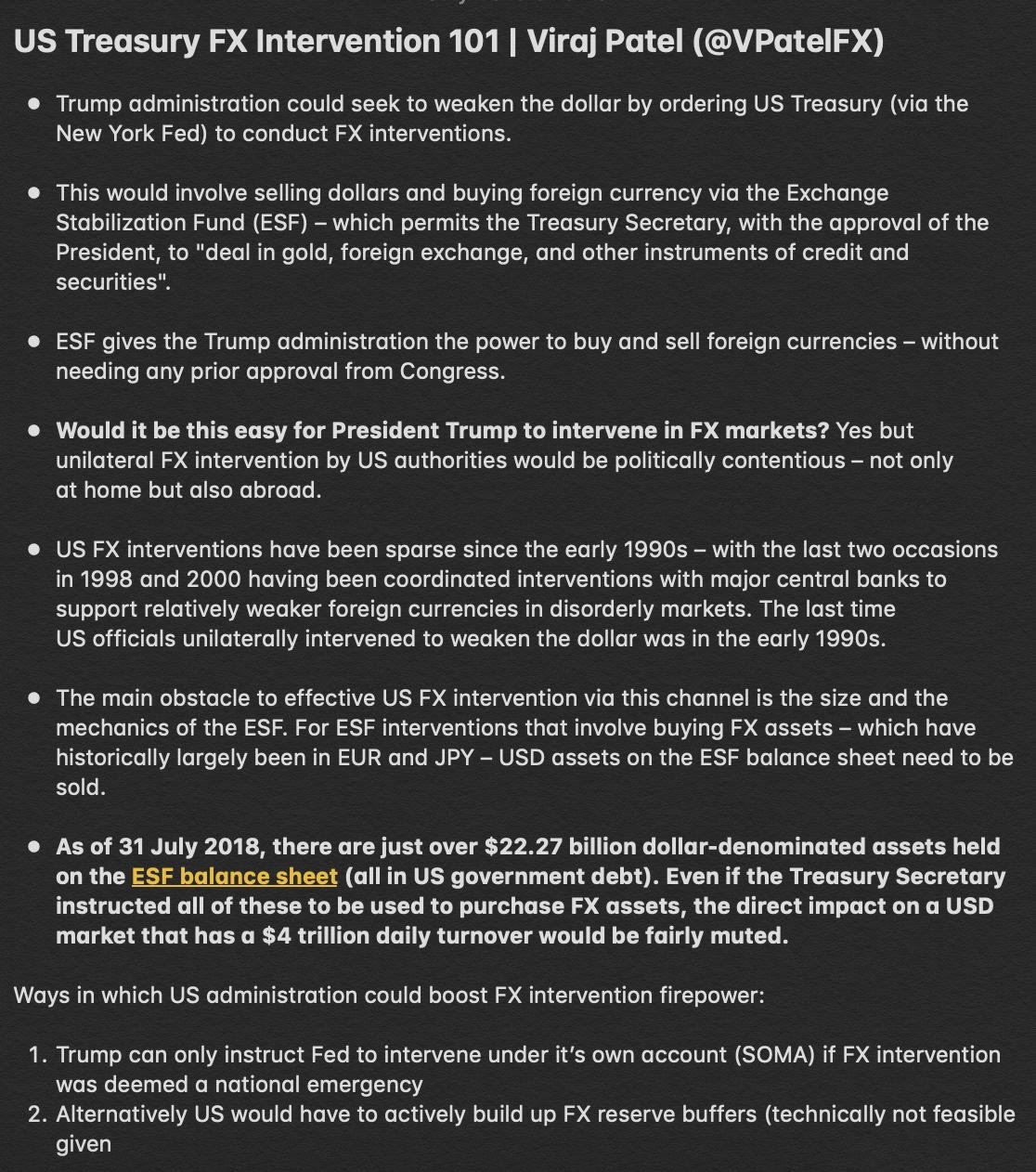 Curious: the idea of Trump devaluing our USD at the same time the WD Gann 90 year cycle coincidently ends in Sep/Oct….

“Credit spreads are widening and the reason that LQD is rising is due to the decline in Treasury rates rather than a bullish tightening of spreads.” ⁦@EPBResearch

⁩“She’s selling junk bonds in a contrarian bet that the debt rally is on its last legs — with the potential to trap funds with billions staked in levered and often illiquid assets.” Pilar Gomez-Bravo

Bonds Suggest a Ceiling for the Stock Market “Since equities made what was then an all-time high in January 2018, performance of the stock market has largely tracked the movement of investment-grade corporate bond yields.” ⁦@conorsen

⁩NEW YORK FED’s yield-curve model implies a probability of 33% the U.S. economy will be in recession in June 2020. The twelve-month forward recession risk is at its highest since April 2008: 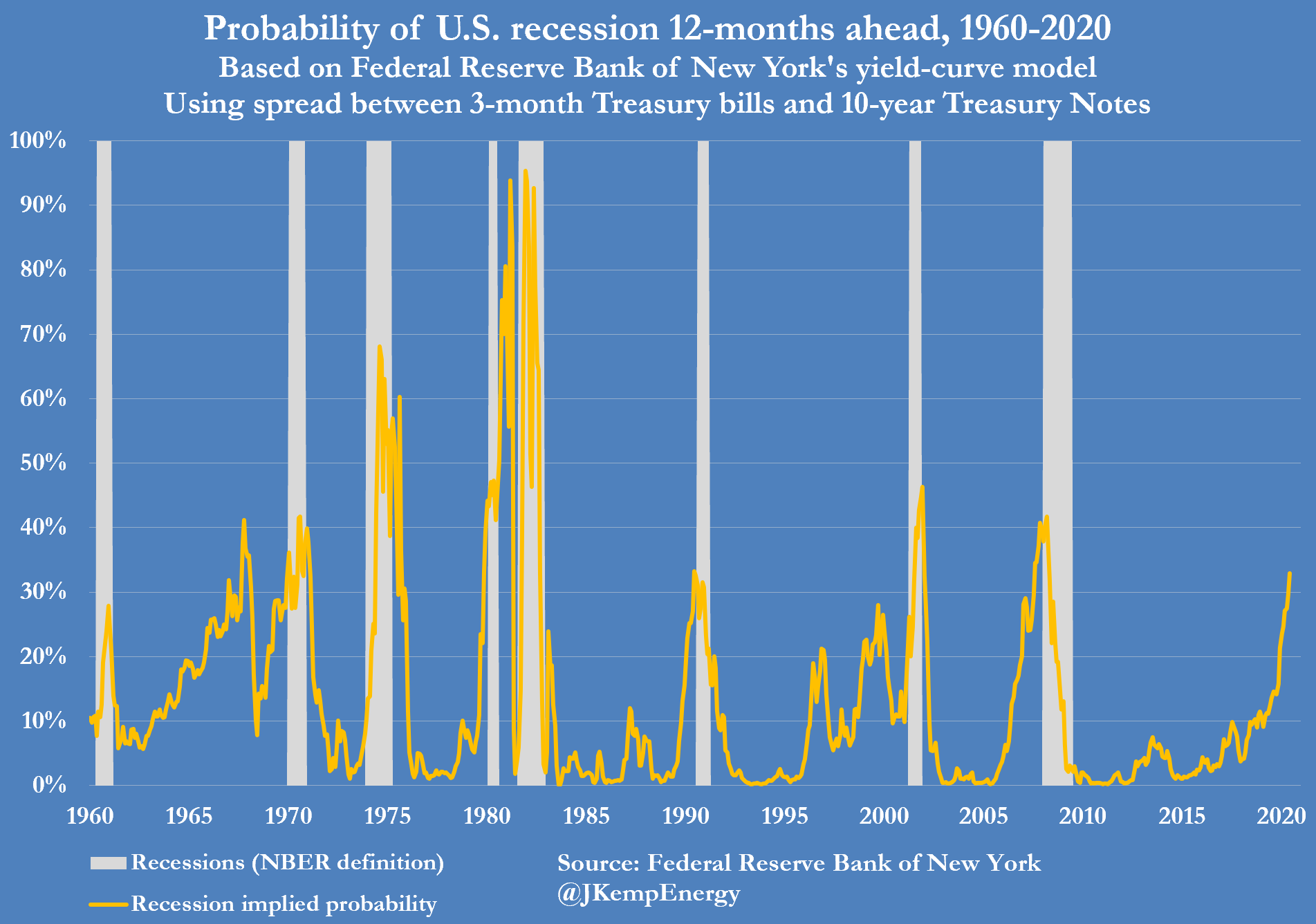 A name most never trade but is A Tell – $BASF

The world’s biggest chemical maker slashed its forecast for 2019, saying earnings before interest, taxes and special items could be 30% lower versus 2018 levels, “mainly due to the trade conflicts.” https://t.co/FpXVdIblnK via @markets pic.twitter.com/JsITjlZCcp

NFIB Small Business Index: Small-business sentiment dipped in May due to trade “uncertainty.” The consensus for May was 104 with an actual of 103.3.  April sentiment was 105. Six of 10 index components fell, three improved, and one stayed the same. Notably, owners’ plans to increase employment and to spend on capital both declined, as did expectations of higher sales ahead. The NFIB, a lobby group for small-business owners who prize small government, blamed “uncertainty” for the decline in sentiment. “Some ‘tariff’ inflation pressures may be surfacing as the percent of firms raising selling prices rose significantly, with 30% of owners reporting recent changes in China trade policy negatively impacting their business,” the group said in a release.

Job Openings: The May JOLTS report via BLS: Job openings were little changed at 7.3 million on the last business day of May. Hires fell to 5.7 million and separations edged down to 5.5 million.

President Trump this morning again railed against India’s tariffs on US goods as unacceptable.

U.S. President Donald Trump repeated his complaints on Tuesday that India’s tariffs on U.S. products were unacceptable but he did not indicate whether he would take any further action in the trade row between the two nations.

The United States and India are grappling with issues that include access to Indian markets for U.S. firms, New Delhi’s demand for foreign firms to store Indian data in the country and Indian exports of steel and aluminum to the U.S. market.

The trade row has prompted both countries to raise tariffs and created unease over the depth of their security alliance.

Hong Kong leader Carrie Lam said on Tuesday the extradition bill that sparked the Chinese-ruled city’s biggest crisis in decades is dead and that government work on the legislation had been a “total failure”, but critics accused her of playing with words.

The bill, which would allow people in Hong Kong to be sent to mainland China to face trial in courts controlled by the Communist Party, sparked huge and at times violent street protests and plunged the former British colony into turmoil.

In mid-June, Lam responded to protests that drew hundreds of thousands of people on to the streets by suspending the bill, but that did not stop demonstrations that shut government offices and brought parts of the financial center to a standstill.

As the world fixates on Donald Trump’s campaign to contain Huawei Technologies Co. and China’s ambitions, a concurrent dispute between Beijing’s two richest neighbors also has far-reaching implications for the production of everything from Apple Inc. iPhones to Dell Technologies Inc.laptops. The industry is now scrambling to gauge the fallout after Japan — citing longstanding and unresolved tensions — slapped restrictions on exports to Korea of three classes of materials crucial to the production of semiconductors and cutting-edge screens.

U.S. Trade Representative Robert Lighthizer and Treasury Secretary Steven Mnuchin spoke on the phone with their Chinese counterparts as the two sides relaunch talks to end their trade dispute, marking the first high-level contact since their presidents agreed to a tentative truce last month.

The American officials spoke to Chinese Vice Premier Liu He and Commerce Minister Zhong Shan on Tuesday, according to an emailed statement from a U.S. government official, who declined to be named in line with policy. Both sides will continue these talks as appropriate, the official said, without offering more details on the next steps.

The European Commission lowered its forecast on Wednesday for the eurozone economy next year, saying that uncertainty over U.S. trade policy posed a major risk to the bloc. The European Union’s executive arm also lowered its estimate for inflation in the bloc.

Drug Manufacturers: A Federal judge this morning ruled that the Trump administrations attempts to force drug companies to disclose the price of medicine in ads overstepped its authority.

Merck & Co., Eli Lilly & Co., Amgen Inc. and a trade group for advertisers sued the government last month to block the regulation, which would have required the companies to include drug list prices in the ads, which are a key part of pharmaceutical marketing. But the law the Department of Health and Human Services said gave it the authority to do so “simply does not support the notion — at least not in a way that is textually self-evident — that Congress intended for the Secretary to possess the far-reaching power to regulate the marketing of prescription drugs,” U.S. District Court Judge Amit P. Mehta said in the ruling.

BA – In another blow for Boeing, Saudi Arabian budget airline Flyadeal to cancel its order for up to 50 737 Max jets, a deal worth $5.9B, when it was announced last year. Will instead buy up to 50 A320neo planes becoming an “all-Airbus fleet” in big shift to Boeing’s European rival. Airbus is set to take over Boeing as the largest maker of planes. Boeing’s seven-year reign as the market leader could come to an end after a weak few months following the grounding of its 737 MAX aircraft.

The upcoming earnings report from Delta Air Lines (DAL) should look fairly strong based off the airline’s monthly traffic report. Delta is anticipated to report revenue of $12.5B for the quarter and EPS of $2.24. Analysts think Delta is benefiting from the grounding of Boeing 737 MAX jets. Delta’s conference call could delve into that issue and Q3 guidance.

Roku is America’s most popular video streaming platform A research report revealed that the binge-empowering dongle makes up 30% of all streaming devices sold in the US — that’s double the share of #2 (Amazon Fire TV). Roku’s edge: It sells its own dongle hardware device and it is pre-installed on many smart TVs. Dangerous combo. 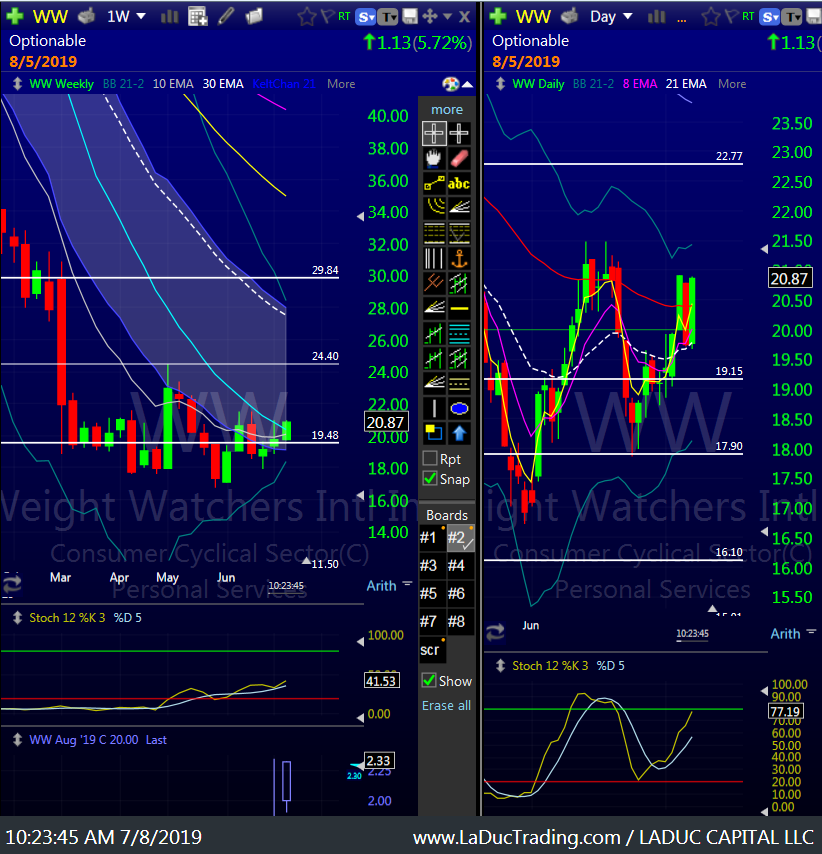 I’ve been talking about $LULU in the StockTwits room and took a long position last week. Monday brought a nice move higher. There was weakness today, but it ultimately printed an inside day with a nice bounce off the hourly 21EMA. I hold that there is room for it to continue higher and a new entry at 186.75 for a move towards a new ATH is reasonable. Of course, we have some uncertainties with respect to Powell and his testimony so I’ll be watching the morning action closely. 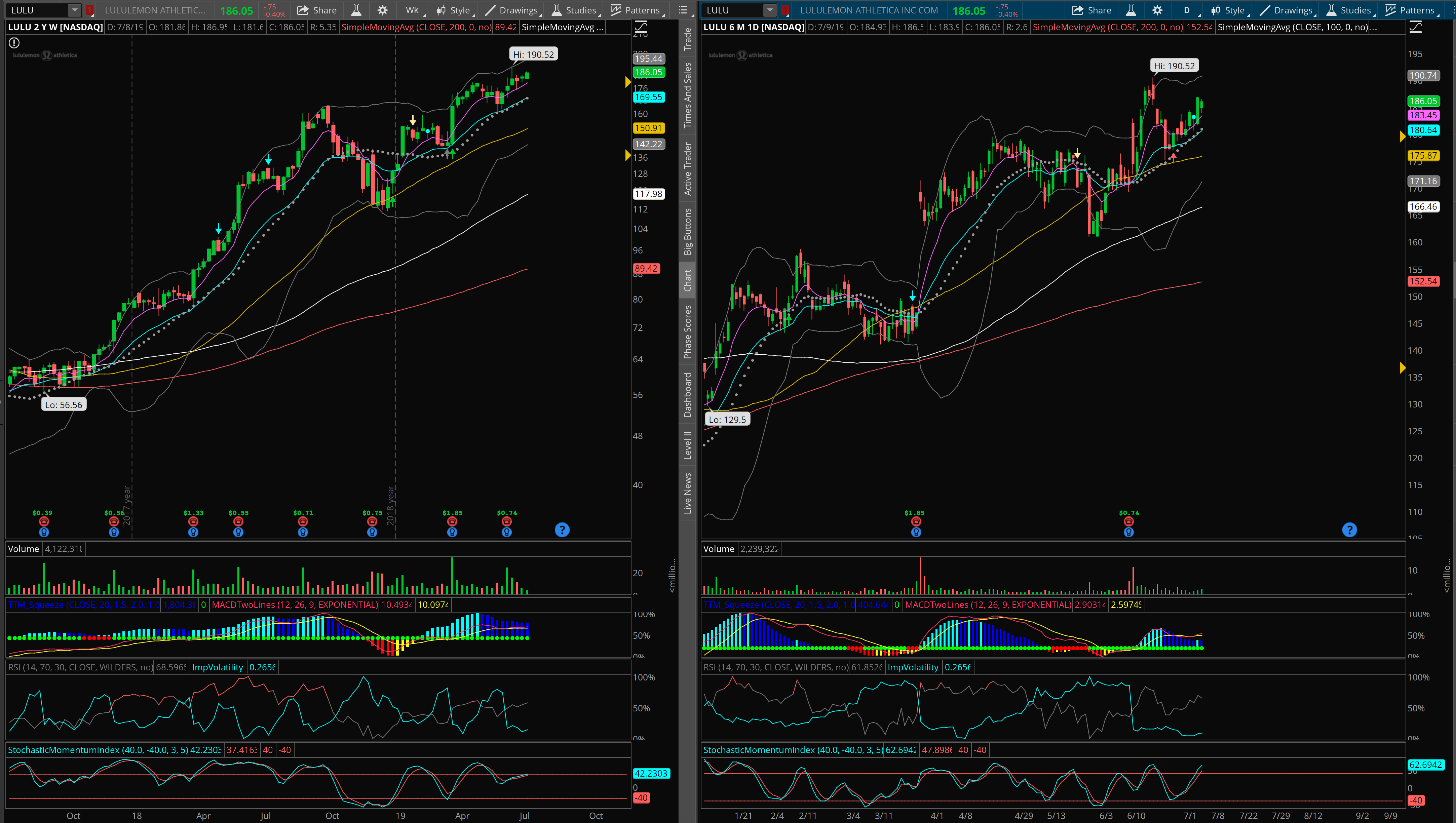 As we’ve heard many times before, history may not repeat, but it sure does rhyme: Former Lehman survivor Pilar Gomez-Bravo is Prepping for the Next Credit Downturn

Another contributing factor to why Utility companies (XLU) are having a stellar run: Major cost input is Natural Gas and the price of natgas has dropped precipitously since 2009 while utilities have experienced a strong uptrend. Here is a U.S. gas consumption and production diagram that shows US consumes 90% of the natural gas it produces and became a net exporter in 2017.

Your afternoon reminder that tomorrow the Trump administration is going to court to overturn protections for 130 million Americans with pre-existing conditions.