Powell is loathe to cut, but has been intonating Fed will cut. They have have already acknowledged “Inflation Shortcomings” which emboldens rate traders who have already front-run the rate cuts. But will they cut 25 or 50bp? And what of the US Dollar? The higher USD has been defacto tightening as has been the balance sheet run-off (QT) behind the scenes – although Fed says they will likely end in September, on or about the time the US Government runs out of money.

The irony of our growing debt/deficit dilemna has caused money to stay on the sidelines – not enter the market despite reaching all-time-highs. Will a rate cut entice Big Money to come back in? Markets, in large part, have been treading water 1.5 yrs – same level of asset prices since January 2018 – while global trade disintegrates from within. The Bigger Question for many: Will this Fed give us a “one-and-done” rate cut, or is this the start of many?

The irony: Most don’t expect that if the Fed cuts, the 10-year yields go UP not down – as market prices in “a better economy” – steepening the yield curve. This is my macro assessment against a technical analysis that is looking pretty bullish rates right now:

And a friendly reminder of what can happen AFTER the Fed cuts: Recession, well in 6-12 months anyway. But judging from the ‘over-tightening’ implied (see next chart) compared to prior cycles, that may be why the bond market is aggressively leading the anticipated rate cut AND why both bond and equity markets are interpreting it as recessionary.

Each of these 3 prior scenarios were followed by a recession within 6 months. pic.twitter.com/4w71cJw7Df

Equity markets, with Trump leading the charge, seem likely to bully the Fed into buying $1.5trillions+ corporate bonds during the next crisis. But first, we need to get through the debt ceiling resolution, which in and of itself is problematic for liquidity. Basically, to get us to September, the treasury dept is saving up the QT pressure of 2019 to be released at once soon after debt ceiling resolution. Most people don’t understand that as soon as the debt ceiling is raised, it unleashes an enormous monetary tightening..And color me skeptical, but liquidity trumps rate cuts. I’m just not sure how a bump in rates/borrowing costs combined with potential liquidity drain combined with government shutdown is going to embolden sidelined money to come back in on a rate cut of any size.

Contrarian “earnings are so bad they are bullish” take:

According to data compiled by Ned Davis Research, since 1927, the firm found the stock market has performed the best in those quarters in which the year-over-year EPS growth rate for the S&P 500 was between 10% and 25% lower. In such quarters, the S&P 500’s average annualized return was 25.0 percent. When year-over-year earnings growth was above 20%, in contrast, the S&P 500 gained an average of just 2.6% annualized.

This is one of the scariest divergences I have seen in a Macro chart!#Unemployment#Deficit https://t.co/an5fbo72O2

Consumer Credit for May:

Consumer borrowing expanded at a solid pace for the second straight month, according to the Federal Reserve on Monday. Total consumer credit increased $17.1 billion in May after an almost identical gain in the prior month. That’s an annual growth rate of 5%. Economists had been expecting a $17 billion gain, according to Econoday. Revolving credit, primarily credit cards, rose 8.2% in May, just a bit above the 7.9% gain in April. Revolving debt had looked weaker at the start of the year, and actually declined in December and March. Non-revolving credit, typically auto and student loans, rose 3.9% in May after a 4.2% rise in the prior month. The non-revolving sector is not as volatile as the credit card sector.

Iran threatened on Monday to restart deactivated centrifuges and ramp up enrichment of uranium to 20% purity in a move away from the 2015 nuclear deal, but the head of Iran’s Revolutionary Guards insisted the world knows Tehran is not pursuing nuclear arms. The threats to ramp up enrichment, made by Tehran’s nuclear agency spokesman, would go far beyond the small steps Iran has taken in the past week to nudge stocks of fissile material just beyond limits in the pact that Washington abandoned last year. They would reverse the major achievements of the agreement, intended to block Iran from making a nuclear weapon, and raise serious questions about whether the accord is still viable. Iran omitted important details about how far it might go to returning to the status quo before the pact, when Western experts believed it could build a bomb within months.

The plan went into effect first thing Monday, as employees around the world got notice that they were losing their jobs. In London, equities traders were told their badges would be disabled by 11 a.m. By 10 a.m., dozens were seen leaving the building near London Wall with thick white envelopes detailing their exit packages. Some were crying as they left. More than a few headed to the nearby Balls Brothers restaurant and bar and were seen quaffing prosecco and beer.

Deutsche Bank AG Chief Executive Officer Christian Sewing’s big bang fell flat with investors. The lender’s shares tumbled as much as 7.3 percent, wiping out early gains after announcing Sunday that it was abandoning its global trading ambitions and axing as many as 18,000 jobs.

The profit goals are too ambitious, analysts said. They noted that a bank that has consistently disappointed shareholders in recent years is focusing its attention on a famously competitive home market and the relatively low-margin business of servicing companies’ routine financing needs. Dividends will be withheld this year and next and its capital position will be reduced to pay for the restructuring that’s forecast to cost 7.4 billion euros ($8.3 billion) — equal to more than half its market value.

Apple Inc.’s iPhone business could disappoint in the next upgrade cycle, following a massive flop for the iPhone XS over the past few months.

That’s according to Rosenblatt Securities analyst Jun Zhang, who downgraded Apple’s stock AAPL, -2.10%  to a rare sell rating from neutral on Monday, citing concerns about the recent rally in the shares and the potential for a lackluster iPhone launch season later this fall. Zhang called Apple’s iPhone XS “one of the worst selling iPhone models in the history of Apple” as the company struggles to generate buzz for its middle-priced iPhone in its relatively new three-phone strategy. His research suggests that Apple’s lowest-priced new iPhone model, the XR, has outsold the XS and XS Max combined since the devices were launched late last year. Zhang’s supply-chain discussions indicate that Apple cut iPhone XR production for the third quarter as it readies for the next launch “and because of weakness in sales in Q2.”

Funds hold a net long or bullish position of just 248 million barrels, which is relatively low compared with the average of 359 million over the last four years. @JFKemp

As of last Tuesday, the Commercial GROSS short position in Comex Gold was 447,104 contracts. This is the 3rd highest total ever…falling just short of the ATH of 463,942 seen on 7/5/16. @TFMetals

Last night I brought up ULTA as a possible long play for the week: 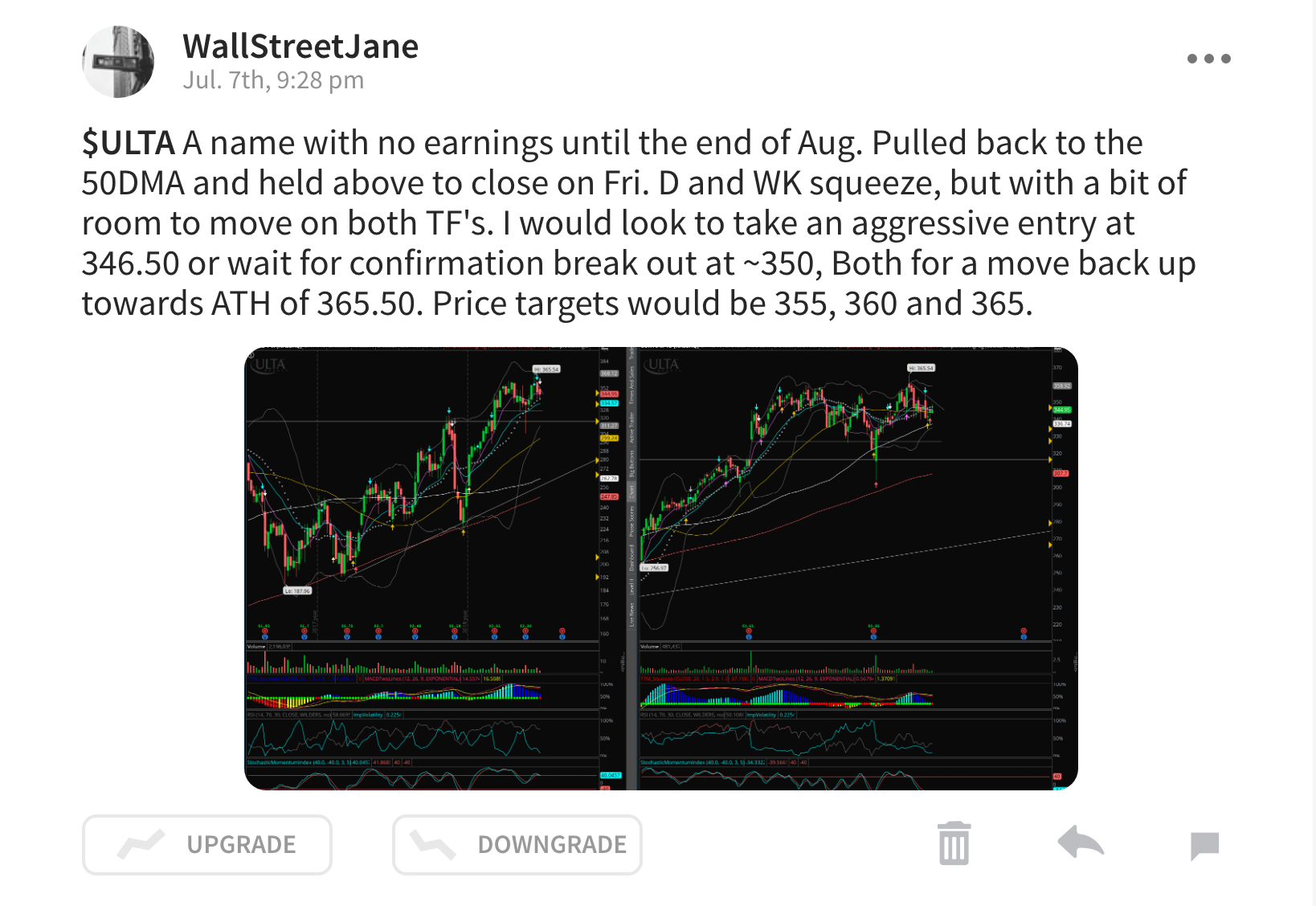 Last Wednesday I talked about ADSK and the expectation that it could pullback to support around 169. On Friday it pulled back to 169.44 and then bounced, closing slightly green. Last night I noted it may chop around the support area and that’s exactly what it did today. At one point it was moving below support, but bounced off the 8EMA, closing back above support. My calls, accordingly, lost some value today, but I continue to hold. 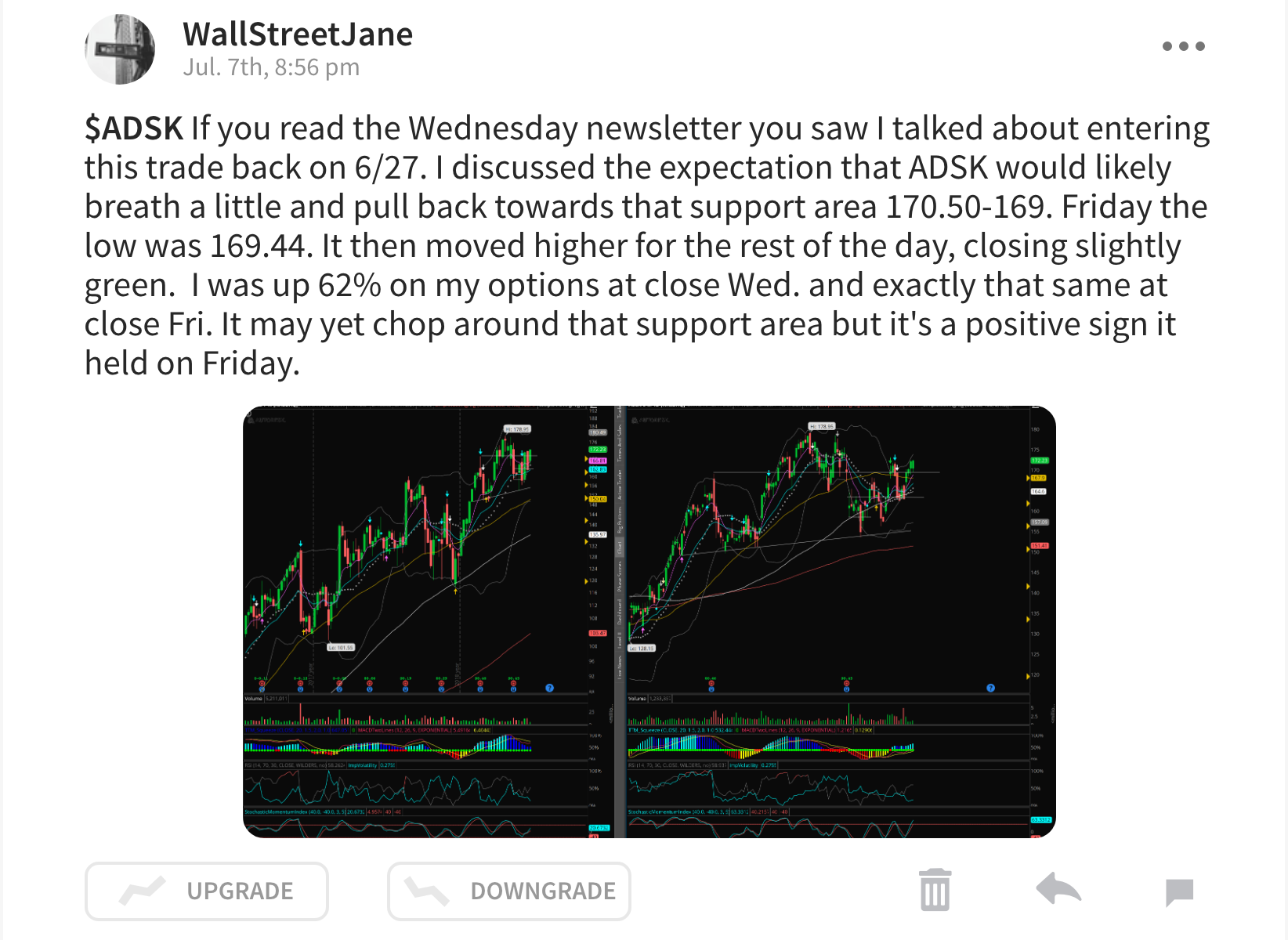 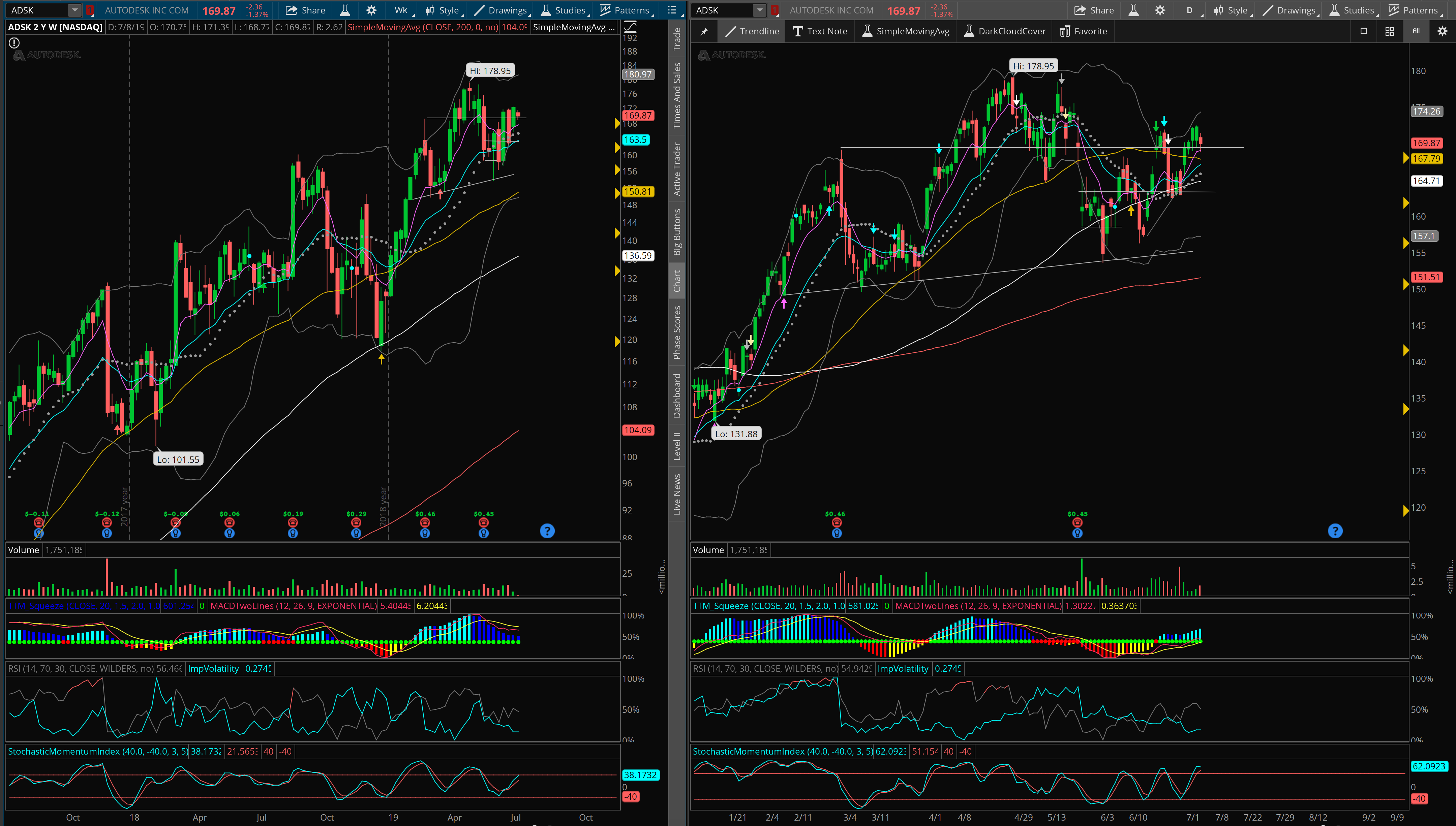 Science is awesome: Left out to dry: A more efficient way to harvest algae biomass

University of Tsukuba researchers developed a new, highly efficient system for removing water from algae biomass with reusable nanostructured graphene, which can greatly increase the yield of ecofriendly biofuels, pharmaceuticals, and fertilizers

The real stuff not paper: Central banks are going after gold in 2019

"Big, important thread alert: There is a lot going on in Europe that feels like it's coming to a head soon… probably bf the summer.’…]" https://t.co/uGjnOKTGUu