I discussed in my live trading room yesterday morning, how I see a move lower INTO/through $3400 in SPX coming up next week. My suggestion was that is was a good time to now add in a volatility hedge or two or three – across timeframes. Here are my favorites: Oct30th, Nov18/20th, Jan15/20th depending on your vehicle (VIX, VXX, UVXY) or even directional index shorts/put spreads.

Here is someone else suggesting caution:

“Looking locally today, things would get messy in index on a move down through 3400 (3389 to be exact) in SPX and / or through 284.63 in QQQs, where we estimate that the current index ‘long Gamma’ position for Dealers flips ‘short,’” McElligott

In essence, it’s all about that Single Stock Option Gamma wind-up and UNWIND that happened August into September. Remember how Nasdaq dropped 10% in two days? It’s been 7 weeks, and QQQ is still 4% lower.

Let’s revisit what happened then – from my client post September 4th:

As client Craig put it so elegantly in the trading room Thursday morning after market opened and I called a 5% down day for $QQQ (it gapped down 1.5% then dropped 6% on the lows but closed down -4.98%):

“Alpha unwind begets beta faceplant. You don’t sell tech stocks to buy banks/cyclicals when the $ is bottoming, curve is flattening, vix is rising, crude has rolled over and CESIUSD has topped. Hold on to your hats.”

Also around that time – August 31st – I did up a Client Video that highlighted end-of-month stock picks that had indeed done well AND a warning that VXN (volatility of Nasdaq) was in a weekly bollinger band squeeze ready to erupt higher which would bring Tech down in a hurry.

Here are those volatility charts updated – and still squeezing: 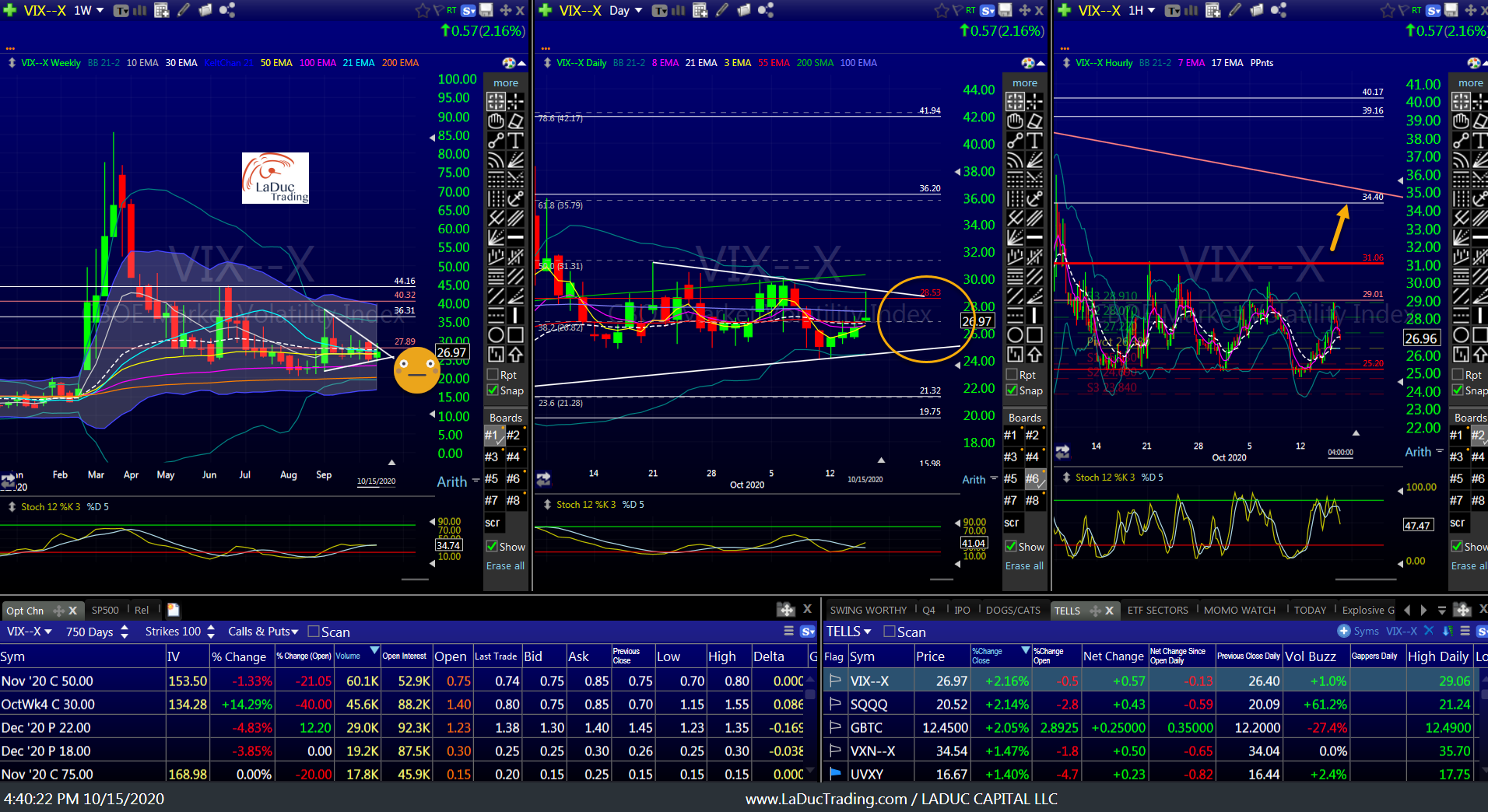 To revisit how massive a wind-up it has been over just the last month:

“the massive cash movements may be a byproduct of building options appetite [as] call open interest in Facebook, Amazon, Netflix, Alphabet, Apple and Microsoft has averaged 12.9 million contracts over the 30 days through Friday, the highest since early 2019.” Bloomberg

So how do I interpret all of this? Dealers may be overhedged! How is that?

The likely result, which we can use in our trading positioning based on the premise that “Dealers may be overhedged!” is to be on the lookout for selling. Because dealers would need to be selling INTO a sell-off!
So let’s remember those stocks that flew on option gamma call buying mania just the past week let alone month – $AAPL $AMZN $FB $NFLX $NIO $ROKU $ZM  etc – and be prepared for selling in the indices in general and these names in particular.
Add to this market structure dynamic: the Fed balance sheet just added $72B today, but:

Fed balance sheet will stagnate the rest of Oct. up somewhat next week and drop a bit the week after. @Barton_options

Add to this currency volatility in the Euro from Brexit talks going bad, and we have the potential for a rotation into CASH – which the USD chart is already intonating:

So in addition to the potential of dealers unwinding their tech-heavy hedges which are heavily-weighting the indices AND Fed liquidity stagnating to dropping rest of the month into elections AND volatility coiling AND dollar bouncing… I want to remind you of potential of a major risk-off market event beyond just the elections but including the elections!

Helped me guide clients for the last -27% pullback. But I timed the Thanksgiving carving when oil dropped 13% and I see risk rising for that again. #OOTT

@ZacharyLRogers @GasBuddyGuy @JLeitchOil very nice piece Zach, we try not to confuse "it won't work" with the political realities of "let's try it", the battle is between The Invisible Hand and The Interventionist Hammer, in Biden's case the nail to hit is higher energy prices, interesting period ahead

In 1966, 5% of US corporate profits were booked in foreign tax havens.

Inflation is sticky AND political and will drive yields higher if nothing else than to cool housing prices / rents / CPI.