Looking forward, Goldman sees U.S. GDP at minus 34% in Q2. (Scotia sees -28% for Canada.) The Unemployment rate in US is projected to be upwards of 40%. Clearly markets already sold off aggressively expecting this, but are unsure how quickly we will recover. Q2 will witness some of the worst data in the history of modern economic statistics.

The median estimate for jobless claims in the week ended March 28 is 3.5 million, larger than last week! Thursday’s print will be more important than the next day’s payrolls report. 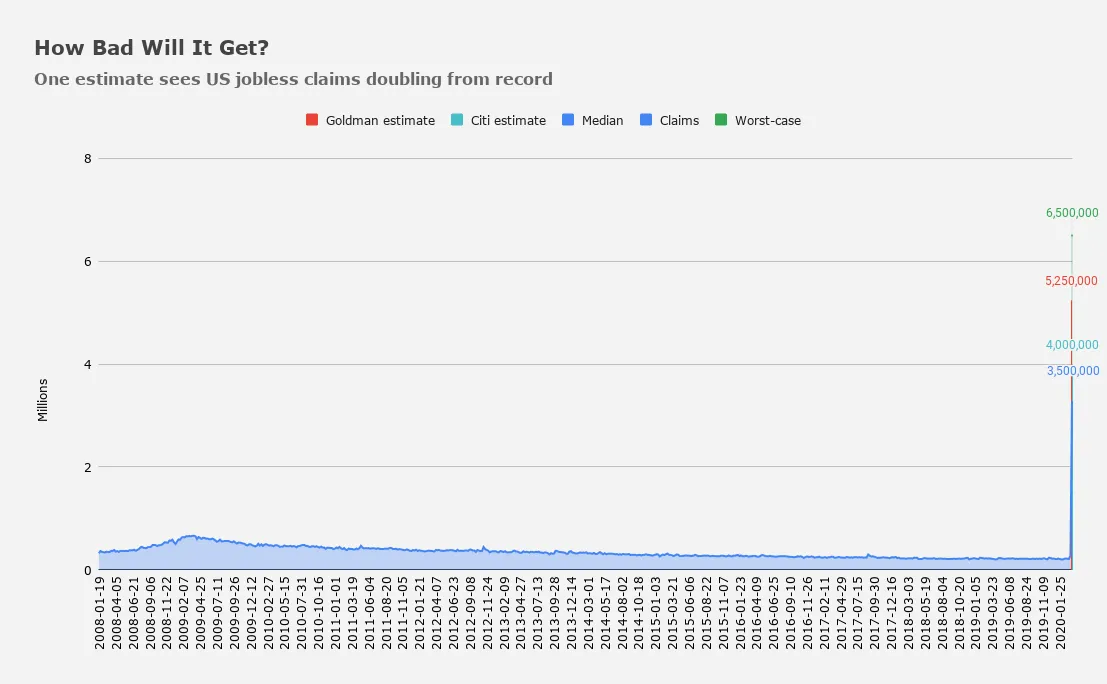 This was the worst quarter for US equities since the Great Financial Crisis – for SPY, DOW, OIL, HY… 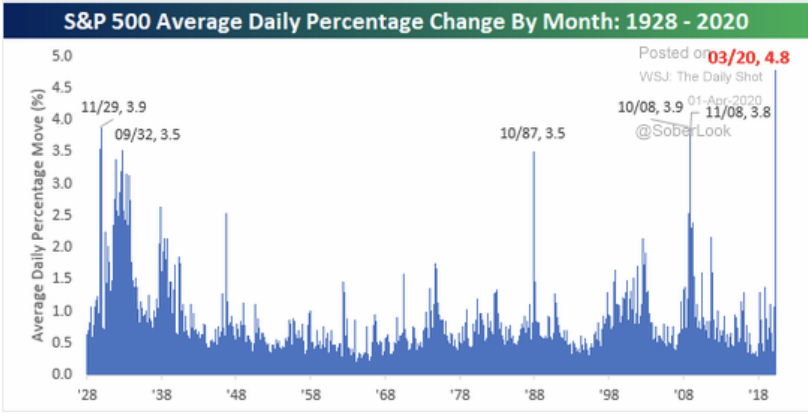 And with that, Credit Downgrades despite efforts by Fed to backstop Investment Grade: 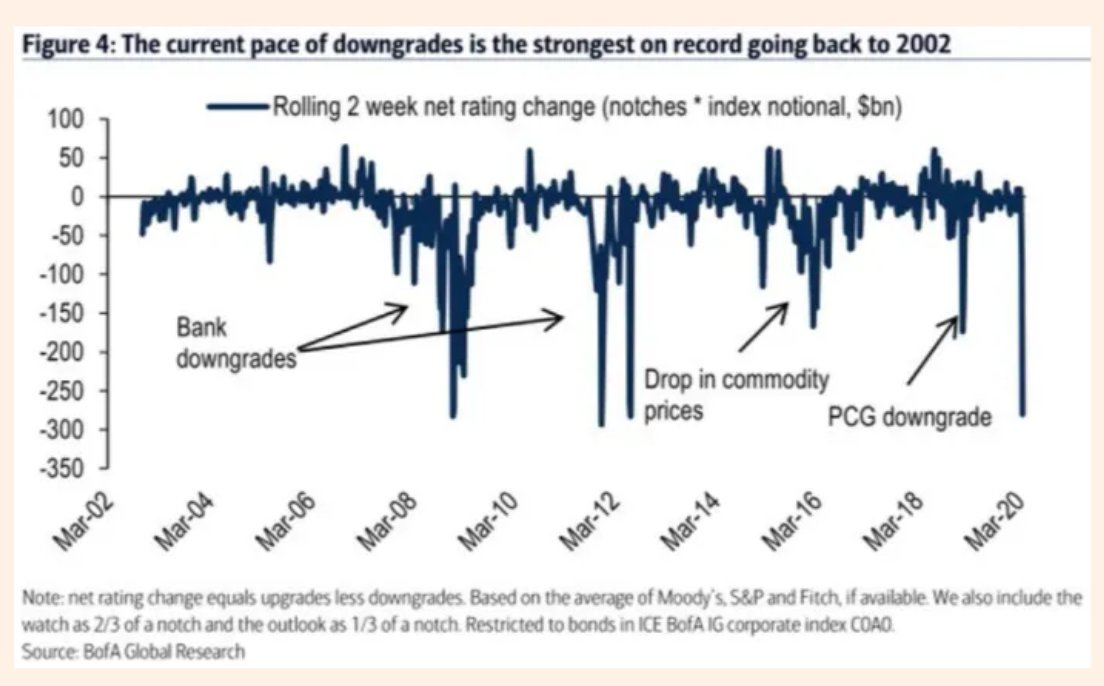 Fed stepped in with a promise to buy corporate bonds, including via ETFs, which calmed things down, but credit markets remain distressed. Many corners of the market are still frozen. 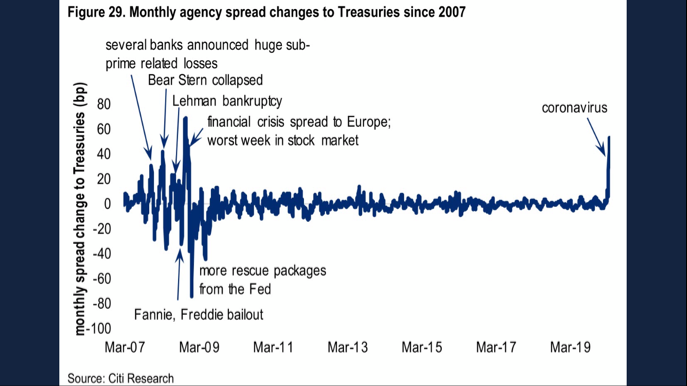 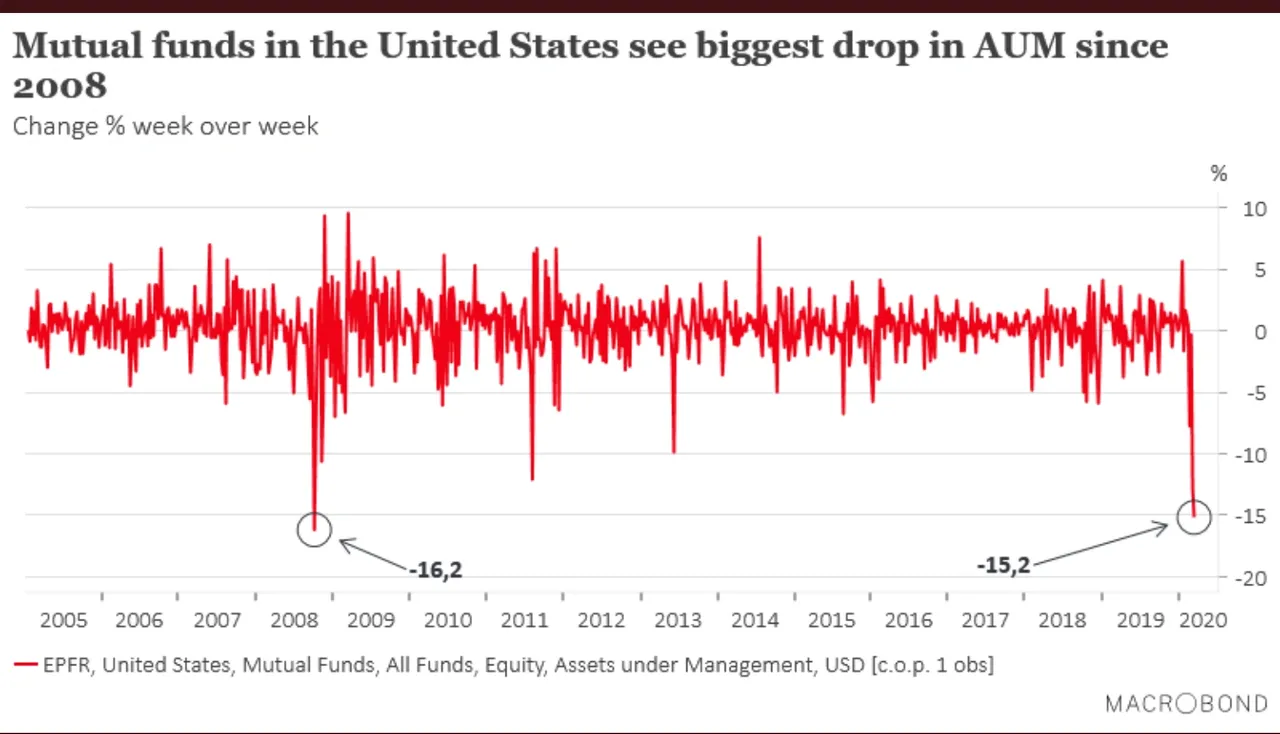 Retirement Assets are Where?

Retirement assets accounted for one-third of all household financial assets in the US, with defined contribution (DC) plan assets reaching $8.2 trillion at the end of the first quarter – up 8.2% from year-end 2018.

I still contend this time is different and worse than 2008:

As I wrote clients this weekend, I see lower volatility (smaller price distribution) and consolidation for the next few weeks (maybe months). I can see a range between $2100 – 2800 forming while we digest the out-sized moves since February 20th. With that, this is a trader’s market. It is not yet safe for investors.

Bloomberg: Americans should brace for a “painful two weeks” ahead, Trump warned Tuesday, as scientists on the White House coronavirus task force projected 100,000 to 240,000 will die in the outbreak—even with distancing measures. The U.S. could see more than 2,200 deaths per day over the next two weeks, a University of Washington study predicted, until fatalities peak by April 15 and eventually plateau by May or June.

Prior to Trump’s press conference last night, market was stabilizing. Passive and Pension Rebalancing being postponed was/is stabilizing. So is all the help it is getting from Fed and Congress in their disaster response.

But with Trump sounding defeated, and news reports of hospitals, states, and even our US military pleading for help from the Federal government against COVID19, it is clear (to me anyway), that Trump is now beginning to feel the weight of his inaction. My bet: He will announce he’s not running in #2020Election in coming months. Obviously, most won’t agree and believe it is political. In the same way I wrote in January that “CoronaVirus will be THE story of 2020”, I believe the GOP, and Trump supporters, will not support a man who lets our soldiers and citizens die – from his inaction, lies and hubris.And none of this is priced into the market.

2500 is now the high gamma strike for the day, with negative gamma building back up a bit overnight. We have pretty light put interest (relative to March) and that could become an issue for the rally here. If traders feel the need to add hedges we could see more pressure in the markets as put buying pushes dealers to short futures (customer long put, dealer short put and must hedge using short futures). Of course there is some irony in that, but it is also those put purchases that can help spur rallies when they unwind. The point is that this could put markets in a bit of a precarious position as we have 1) negative gamma that may lead dealers to short if the market goes lower and 2) (if) we get put buying in size that also may cause dealers to short futures. SpotGamma

This is not a statement that I think a selloff is imminent, but should a selloff start it could gain steam rather quickly.

The dollar saw strong demand Monday night at the Tokyo fix and is bouncing higher off the 10Wk which I discussed as needing to close above to remain bullish. Perhaps it is helped by the bounce in oil, encouraged by PMI numbers out of China that also imply expected Chinese refinery demand.  It remains a ‘safety-trade’ and in short supply globally. The euro is pulling back after rallying every day last week. Long story short, despite massive FED intervention to break the back of DXY, the path of least resistance is still higher. Granted, after a 10-std deviation move in March, it would be perfectly acceptable for it to also see lower volatility (smaller price distribution) and consolidation for the next few weeks (maybe months).

My very good friend Chris Kimble sent me these charts and we have discussed the technical set up for long crude. I am watching closely for a bottom reversal signal. 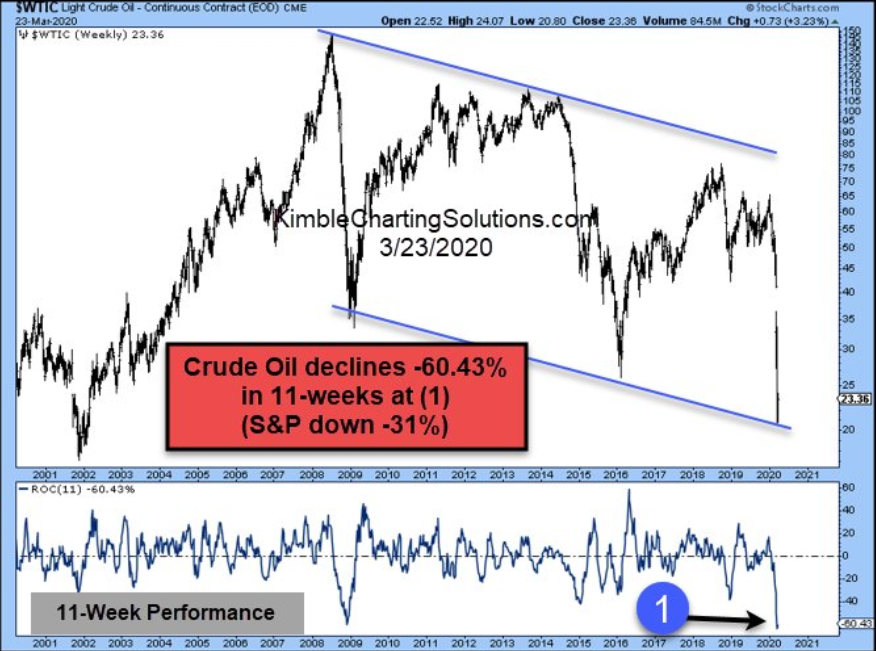 I also noticed STRONG option flow in $USO Monday. Curious how Paper vs Physical has diverged in oil market. Paper market (financially settled with no delivery of physical) is lifting while physical is cascading. 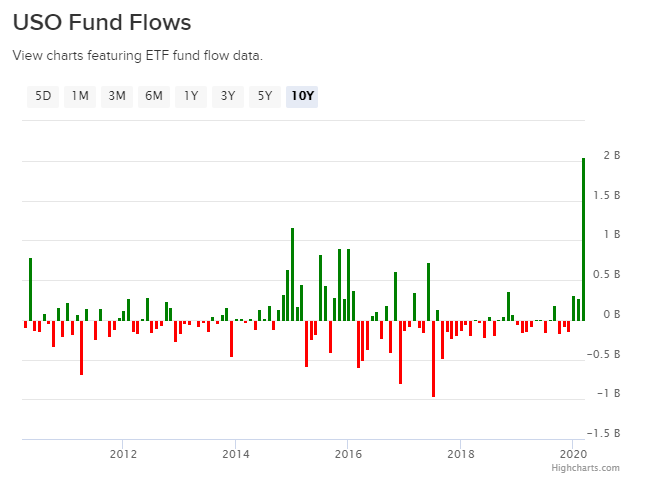 Oil and Gas companies are trading as if they are going out of business. I contend some can not and will be saved as ‘national security’. I also see efforts by Trump to save Shale – direct financial support and new creative storage solution proposals – that the administration will go to support energy independence. There should be some good fishing in this pond soon.

Also yesterday, Trump talks to Putin. Trump talks to Fox and told Fox they are looking into “oil floating storage”. Even proposing to let drillers “stash glut of oil in Federal storage”.

Curious: since there is nowhere physically to put all the oil (that no one needs), might be why Trump told Fox they are looking into "oil floating storage"…$WTIC https://t.co/U8krIA4V7k

With falling prices and rising storage costs, producers are at a disadvantage, but XOM, CVX will not be allowed to fail. Also, news that China’s refineries are going to dramatically boost their processing rate helps stabilize refineries in India, Canada, and South Africa.

My point is, I think Oil finds a floor and soon.

Low-interest rates, Quantitative Easing, Fiscal stimulus and other emergency monetary measures that are being implemented right now are highly deflationary with a stated purpose to ‘break the back’ of the dollar bulls and eurodollar spike. But none of these solve the growing Mortgage Crisis I wrote to clients about last week.

RBC: “We expect property values to fall briefly: Surging unemployment and the market’s illiquidity will compel a growing number of tight-squeezed [home] sellers to make price concessions…We think the recovery will come in stages—taking buyers up to a year to regroup and rebuild confidence amid high unemployment. Based on these assumptions, we project home resales to dive by nearly 30% this year in Canada to a 20-year low of 350,000 units.

Global Repo is the latest Fed tool it pulled out, trying to avert a rise in yields at a time when the US government will need to borrow to finance stimulus and the Fed is increasing its holdings:

The facility reduces the need for central banks to sell their Treasury securities outright and into illiquid markets, which will help to avoid disruptions to the Treasury market and upward pressure on yields. By allowing central banks to use their securities to raise dollars quickly and efficiently, the facility will also support local markets in US dollars and bolster broader market confidence. Stabilizing foreign dollar markets, in turn, will support foreign economic conditions and thereby benefit the US economy through many channels, including confidence and trade.

Translation: this is to help prevent selling of US assets/debt by foreigners for much-needed CASH. Critics will say it can drive yields higher harming US debt holders. The Fed’s job is to keep rates lower for longer.

This is why the Fed must continue to buy an unlimited amount of U.S. Treasury securities – and is buying the largest amount of Treasury Bills, Notes and Bonds at its fastest pace in history. Bond redemptions are at unprecedented levels which is why the Fed is adding to their balance sheet daily.

Back in 2008, it took the Fed about 6 weeks to break the TED spike with currency swaps and QE. With that, I contend the next phase of stock sell-off likely begins when the USD spikes hard and momentum stocks get sold.

“If there was ever time for a tactical reversal of US Equities ‘Momentum’ factor and with it, [the] potential for a large ‘value over growth’/’cyclicals over defensives’ reversal impulse—it would likely be now”, Nomura’s Charlie McElligott wrote, in a Tuesday afternoon note.

Q2 Theme: Short momentum names and Long value, cyclicals and high beta. Here’s some of my Intermarket analysis that may prove helpful to timing a turn. 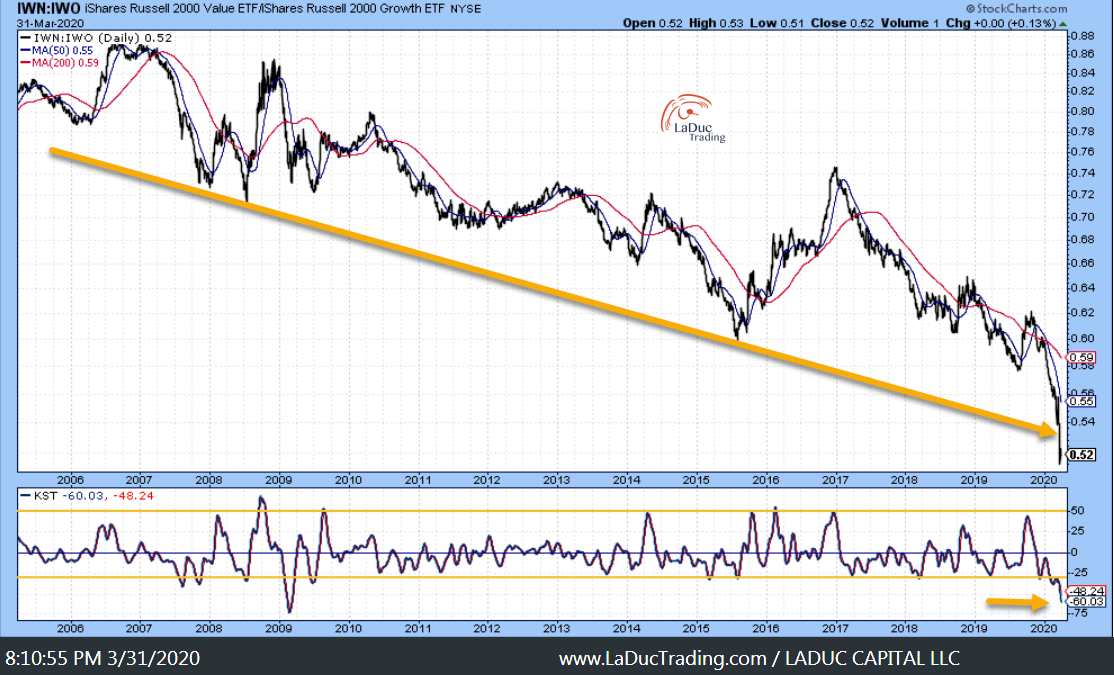 I suspect that bonds at some point will sell off as yields move higher to unwind some of this steepening in the curve, but the trend is still UP: 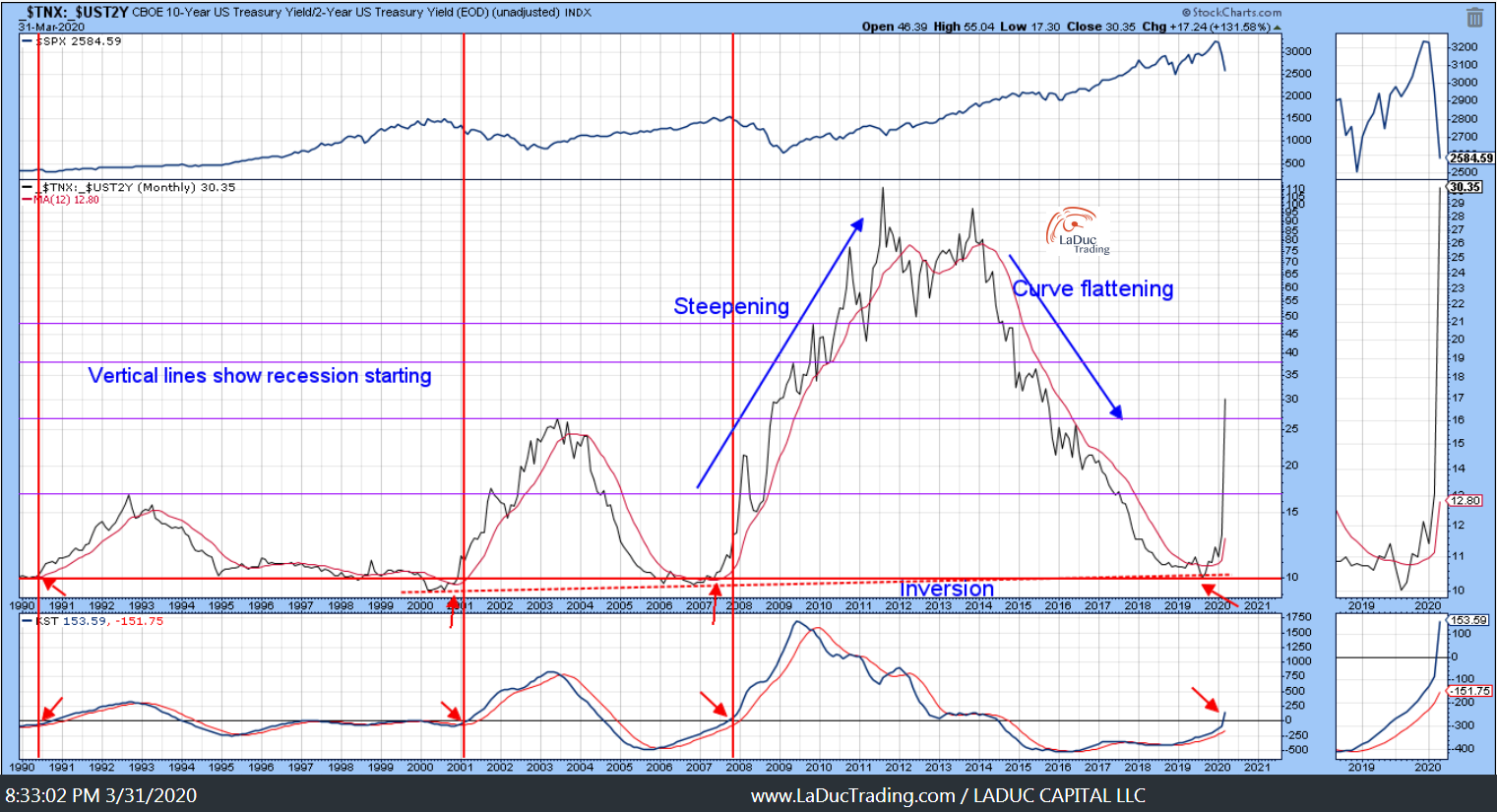 And with this Momentum-To-Value rotation, I expect Crude and Oil+Gas names to move higher. The caveat,however, is that I also expect USD strength, which has not risen inversely with the recent Oil (and commodity) sell-off, yet. Will follow up on USD strength next. For now, I am spying stabilization in both Oil and markets.

💚 Macro, Intermarket, Technical - my fave combo approach to studying markets in order to predict them. 💃

WHY I've been a bond bear big picture 👇 even if this current yield spike is likely front-running potential emergency rate hike next Wed.

Here’s my stacked yield chart (short to long duration) to show how soon we’ll be at those levels!

It's a totally free live event with Q&A

So best save your spot now 😉
➡️➡️➡️https://ecs.page.link/6HpPA

Narrative of ESG is pretty but unpractical in its current state of replacement. Having said that, many innovations will be driven from the excitement + funding. For now, I’m more interested in here + now...

A massive renewal in CAPEX investments!

"ESG investing" in its current form is similar to people who take selfies of themselves in fancy locations to show they were there, while barely experiencing it for real.