Fishing Plan for Week of April 13 – 17: Bullish Into Earnings

The Week That Was

Last week I anticipated $2800 would be tagged and it was.

My range – as posted this weekend – was higher into $2800 but still holding the belief that we would begin to snake sideways from there. Curiously, institutions are already positioned for another flush lower.

My worry/bet: On expectations that Russia and Saudi Arabia will come to terms and announce a cut, crude goes to ~$35/bbl. Then we drop lower on reports that those talks have once again broken down.

How did the week go?

Stocks ended higher Thursday but off their best levels, after the Federal Reserve announced $2.3 trillion in loans to aid the economy during the coronavirus pandemic, overshadowing a record 6.6 million U.S. jobless claims. Stocks lost ground following news of an OPEC agreement in principle on production cuts, which fell short of what markets were expecting. Mexico has reached an agreement on oil production cuts with OPEC+ after President Trump intervened to resolve the impasse. For the holiday-shortened week, the S&P 500 surged 12.1% for its biggest one-week gain since 1974, while the Dow rallied 12% and the Nasdaq jumped 10.6%.

As outlined in my weekend Gone Fishing Newsletter & Intermarket Chart Attack: Gluttony – I see a bullish impulse wave building. My original thesis was that we would tag $2800 last week and then chop lower into earnings. I am not so sure now that Fed just juiced the bond market!! Let’s face it: If corporate bonds don’t work, the stock market won’t work. And Fed just came in to make sure they would…

A break of $2666 is the clear level to get short again for a retest of the lows.

As discussed last two weeks (trading room, client posts), all eyes are on the MBS/CMBS/REIT space. After $8.5T in disaster relief aid by Fed + Munchin + Congress, little intervention has been given this critical mortgage space. And if this is not fixed, and soon, I would expect we have the impetus to move lower in markets, but I can’t help but believe it will get defended.

What would help ‘fix’ it? Congress to offer mortgage relief and Fed to step in and backstop lenders. If not, all the work that has been done to backstop banks, corporations and markets will unravel.  The fall-out in the REIT space has made for profitable trading from oversold levels (as called out Monday in pre-market), but  there can’t be a recovery in the general stock market until the “Non-Agency” mortgages stabilize. When it comes, I believe the market will be chased higher. 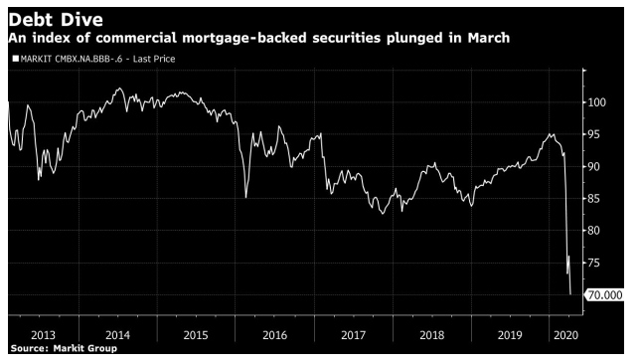 We did well on that Oil Pop. Ready for the drop?

Color me skeptical. I believe, as I stated Friday in my live trading room and leading up to the Friday meeting, that the path of least resistance is actually down short term until the speculators puke – Closer to $17, as I have been calling for about a month. Then Trump can come in and save shale – but not likely before. Refer to my bigger Oil Vey piece from this weekend for the nuanced details.
I’m not alone in my oil call; My favorite oil trader tweeted this weekend:

TI at $17/bbl ought to help them get to where they need to be, snatching defeat from the jaws of victory

Then in DM he wrote: “specs are long up the gazoo”, which as I point out in my Oil Vey piece is very different from two weeks ago….

There are so many moving parts to this pandemic (medical, economic, credit, stimulus, etc), that it’s hard to get into the mood for Earnings Season, but here we are!
And believe it or not, 62% of SP 500 Market Cap Might Have Better Earnings Than You Think. This is a post that actually helps to explain what’s happening in my GAAAPSPX intermarket analysis read – it is printing a higher not lower bar!

So that translates into a potentially bullish (or at least neutral) earnings season despite the devastation in the real economy or the collapse in indices since the last reporting period!

In The Spotlight: Major U.S. banks step into the earnings confessional this week to lead off the Q1 earnings season. While the group wore the villain’s hat during the 2008-2009 financial crisis, households and companies are looking to banks this time around for relief as the pandemic disrupts economic activity. Analysts will be digging into what bank execs say on loan loss reserves, trading revenue and dividend strategies in particular. On the economic front, the retail sales report for March will be in focus as economists project a 6% Y/Y drop. The Empire State Manufacturing Index report, industrial production data and another round of ~5M-7M jobless claims will be closely watched as well. The IMF is due to issue its updated outlook for the global economy in the week ahead, and on the corporate front, there is some chatter that Apple (NASDAQ:AAPL) could make an announcement on the new lower-cost iPhone 9.

I don’t want to sound like a valley-girl, but “toe-ta-lee”:

Of the top 10 names in the XLV (Health Care ETF), Johnson & Johnson (JNJ) and United Health Care are 18% of the market cap of the ETF and then rounding out the top 10 names, large-cap pharma which Amgen (AMGN) is a included in, is 20% of the market cap. If JNJ or one of the large-cap pharma’s do what Abbott (ABT) did in the last few weeks, with the 5-minute test, Covid-19 and the requisite worries over the virus might fade quickly.
Brian Gilmartin

I have recommended large-cap drug mfg and biotech, specifically GILD, REGN, JNJ as well as AMGN, MRK, PFE, LLY, for weeks now. It has followed my theme of “The best offense is the best defense” and I can’t think of a better sector that delivers both life-saving medicines with dividends in a time of CoronaVirus. They may just be starting.

CAT: Caterpillar will post its March machine sales tallies sometime during the week. In February, global machine sales were down 11%.

AXP, COF, DFS, SYF, ADS all post credit card chargeoff and delinquency reports this week. Get the popcorn and kleenex!

Airlines look for relief: Airlines could receive details this weekend about terms of the government payroll grants that could total $25B. Cargo carriers are also waiting to hear on $4B worth of grants. AAL, UAL, DAL, LUV, JBLU, ALK are expected to haul in around 90% of the package, according to Reuters. Sources indicate that the Treasury Department received 275 applicants for the aviation grants.

Boeing mulls options: LAZ and EVR have been tapped by Boeing (NYSE:BA) to help it sift through various funding strategies – be it government or private options, or a combination of both. While the feds have targeted about $17B of the recently rushed-through $2T stimulus to Boeing and its suppliers, that relief comes with conditions – reducing executive pay, limits on capital returns, retaining most workforce. The hiring of Lazard and Evercore suggests Boeing is more interested in advice, rather than underwriters, at this time.

I wrote about the rotation from Momentum-to-Value last weekend and followed up daily in my live trading room. On Monday, I suggested oversold REITS like SPG, ARI, IVR, EPR etc as well as continuation in INFRASTRUCTURE plays FCX, X, XME. Tuesday, I suggested ‘Oversold Value” plays in RETAIL and continued ENERGY names.

I wrote Tuesday for clients about how there is some great fishing in short squeezes.

Whether recommending CCL Monday at open on Saudi asset stake (stock has risen 30% in 2 days) or REITs pre-market Monday like SPG (up by same amount ~30% in 2 days), stocks heavily sold/shorted can have strong oversold bounces. Here is a great report on the top “Short Squeeze” AND “Profit Squeeze” candidates. 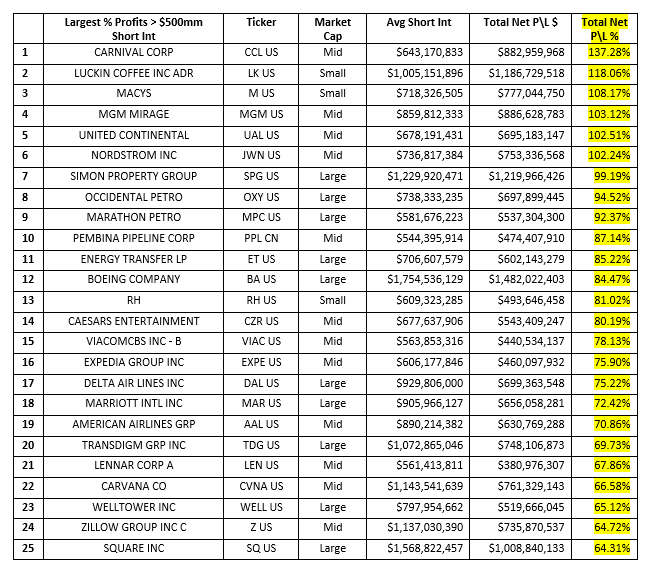 I contend, this will be the best fishing for rest of April: Technology to Staples is but one way to express a rotation from Tech/Semis into oversold Value, whether it be Staples, Short Squeezes, Dash-for-Trash, Left-for-Dead… you get the idea. Think small caps. 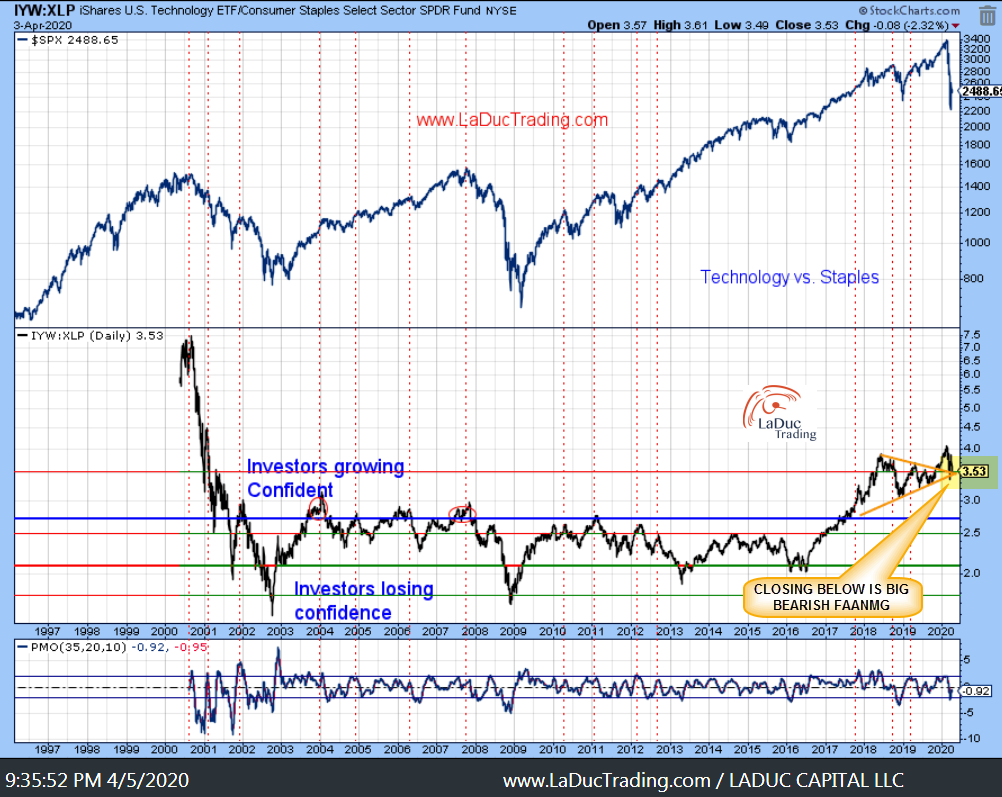 And by definition, when leaders don’t lead, it is bearish.

While we chase and swing trade bullish moves, keep in mind the world is still mostly gripped in a surreal lock-down and economic depression on Main Street from CoronaVirus. Countries are still coming to grips with the extent of the damage and some warn “The Fed’s Cure Risks Being Worse Than the Disease.” On the other side of this, there will be consequences as outlined in “Supercharged Debt Bets Unravel and Expose Wall Street Risks”.

How soon will Fitch come out and downgrade US – ala 2011?

With that, don’t forget to hedge!

I want to thank my loyal clients and those who have recently signed up. THANK YOU! As you know, I am a one-woman shop, and my methods and attention may not seem ‘mainstream’, because they’re not, but somehow you are here because you find value and I thank you for trusting in me to help you navigate these crazy markets while profiting from my market timing calls.

Restriction is not my jam. I want to scan and synthesize market-moving news, across multiple assets and timeframes while I look for patterns and volatility. Basically, the market is a mystery wrapped in an enigma and I want to try and solve it every day. In the process I spy some pretty decent set ups and sector rotation while keeping foremost in my mind a desire to keep you safe. I hope I help.

I have four excellent friends in support roles for my business – James, Archna, Zeke, Renee – and I am more than grateful for their support.

During this holiday time when many of us cannot be with our family and loved ones, I want to send a virtual hug because it sucks to be alone, so I just want to let you know you’re not.

I wish you a fabulous week of trading and see you in my live trading room!

Narrative of ESG is pretty but unpractical in its current state of replacement. Having said that, many innovations will be driven from the excitement + funding. For now, I’m more interested in here + now...

A massive renewal in CAPEX investments!

"ESG investing" in its current form is similar to people who take selfies of themselves in fancy locations to show they were there, while barely experiencing it for real.

Ah, so much to learn from MLK still…

We could really use MLKs spirit of “Dignity and Discipline” in social media, politics, etc.

In honor of MLK and the mother who raised him! 🙏

“We must forever conduct our struggle on the high plane of dignity and discipline.”

My trading plan in a nutshell:

FED IS ALWAYS BEHIND THE CURVE

Great read! How US deregulation caused consolidated foreign-owned shipping barons
who have the most to benefit from our shipping bottlenecks.