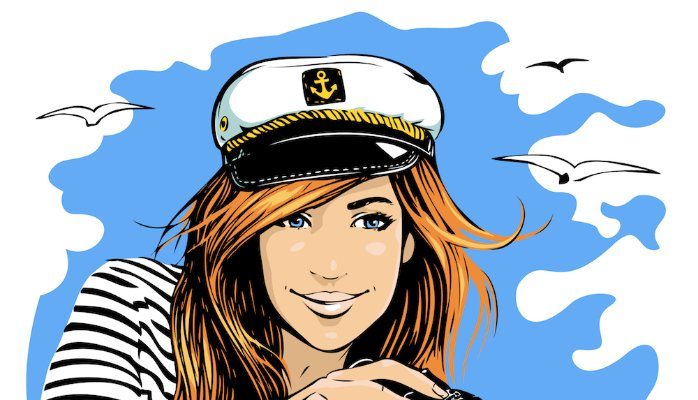 There are lots of ideas out there on what to trade. The trick is synthesizing news-you-can use from the noise. Choosing ideas from veterans doesn’t make it a sure thing. But listening to ol’ timers…well, there is so much to be learned from experience. And I love to learn which is why I scan and cull and cultivate a short-list of traders/investors I follow and their trading/investing ideas. Sometimes an idea appeals so I make it my own.

Themes I’m watching right now from experienced captains and where they are going on their fishing expeditions:

When a stock doesn’t drop from a downgrade, I notice. It’s a sign of strength, albeit subtle. It’s also a sign the auction of buyers and sellers may have found a floor.

In the same way, Pring draws attention to something the media and traders may have ignored:

“a blockbuster increase in housing starts was reported but attracted miniscule attention. Part of the jump was due to a depressed September number, so some could argue that it was not so significant. Even so, the new numbers pushed starts into a new post-financial crisis level high. But why am I making such a big thing about this? The reason is that housing starts are a really long leading indicator. Financial indicators usually move before starts, but starts are the first thing to reverse that you can touch and feel, and that means that we have a reliable piece of evidence that the economy has emerged from its corrective path of the last two years and is set for an improvement in its growth rate.”

How I Interpret Pring’s Analysis

Everyday I go through the SPDR ETFs to size up money flow. The Housing ETF, XHB, is closely correlated to the WOOD ETF. Makes sense: wood is needed for building. Anyway, it is clear that WOOD is at its 52W highs while XHB has room to go. It helps that XHB is above all its moving averages and has very little resistance until ~$36. Of course, the bigger gains for this options trader can be found from playing momentum in the companies that make up the XHB. I will be fishing around in these waters: DHI, HD, LEG, MHO, PHM, TOL, WHR. 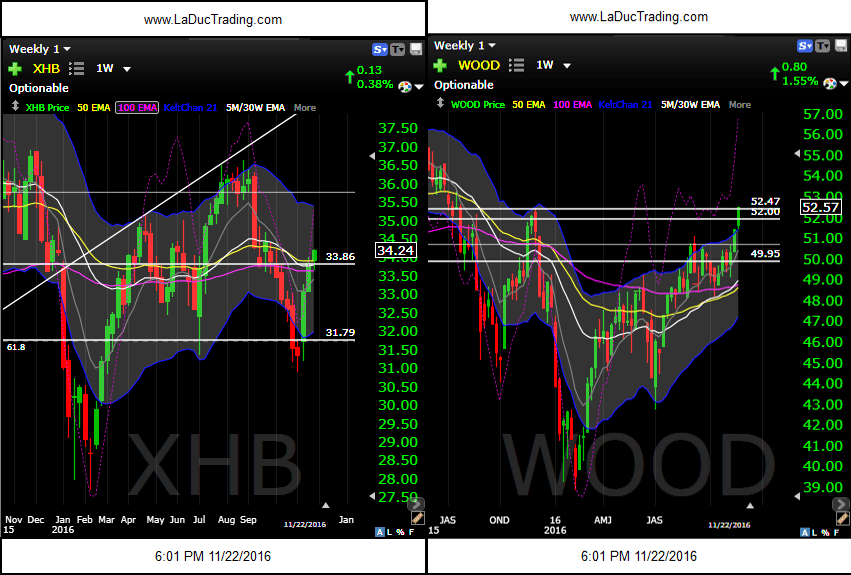 Caveat: Remember peaks in housing starts generally lead recessions by one or two years, sometimes longer, so these are trading ideas and if conditions change, so will I.

Outsized reactions to news-driven events often reverse before finding equilibrium then in time their natural trend develops. In the case of Buffett’s recent disclosure that he is long airlines, many hopped on as this sector lifted off with the Buffett news. They may just cruise along for awhile versus pullback or return to earth if Phil’s take on Buffett’s reason for buying has wings: 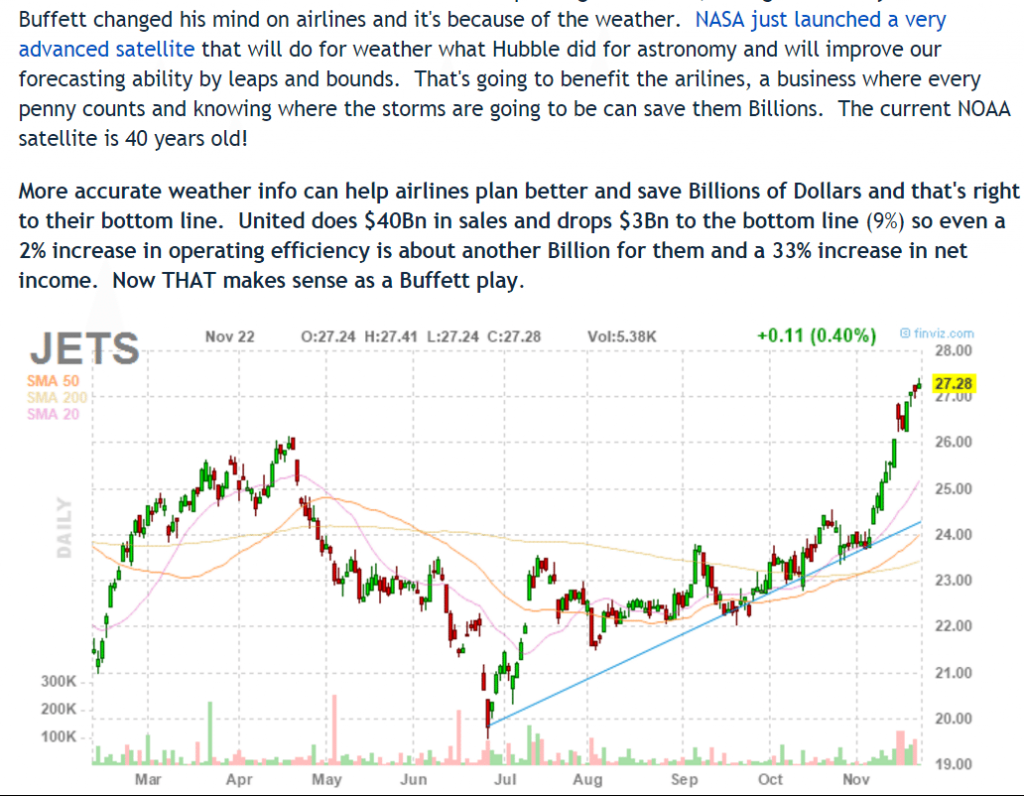 How I Interpret Buffett’s Analysis

For me, this is a case of altitude sickness. I mean, I short when stocks are overbought and buy when oversold. I also like buying a stock on a pullback, especially if the momentum from oversold, or extremely oversold, has energy to keep it moving up. I did this back in June with GOL after a lovely inverse head & shoulders on the weekly. And again with AAL in September anticipating a breakout after pulling back. But these airline stocks now? I’m gonna hang back until a few of these have landed back on earth.

Rich has been very bullish Japan, and US equities. He has acknowledged that global economic stability was completely predicated on central banks, not on demand, and that the stick-save on oil back in February created market stability. With Trump, we have proposed policies that could promote demand and inflation, not just stability, and with that he sees US equities as cheap.

His thesis on Japan, in particular, emboldens the point that media misunderstands the impact that with their policy announced in September to peg the Japanese 10 year government bond yield to zero, it is akin to unlimited QE. And that means devaluing the yen to prop up Japanese equities.

“What’s happening now is the materialization of the major stimulative policy they launched in September. This has green lighted the short yen trade/long Japanese equity trade again.  It should drive another massive devaluation of the yen, and a huge runup in Japanese stocks (which I don’t think ends until it sees the all-time highs of ’89 — much, much higher).”

How I Interpret Rich’s Analysis

I love this trade. I have been in this trade since my FXY chart triggered short October 4th. Not only that, my October Macro View was predicated on the fact that FXY would lead GLD GDX TLT lower.

Japan was My Tell:  I believed and wrote Sept 21st that the 10 yr yield on $JGB was just beneath the zero rate for the last time. With the BOJ setting the new cap on benchmark rates at zero, my bet was that they would defend 100 $USD/YEN and that the FED would help. Translation: I watched for the trigger to short the Yen and go long the $USD using $FXY and $GLD $GDX as my proxies short. That worked. 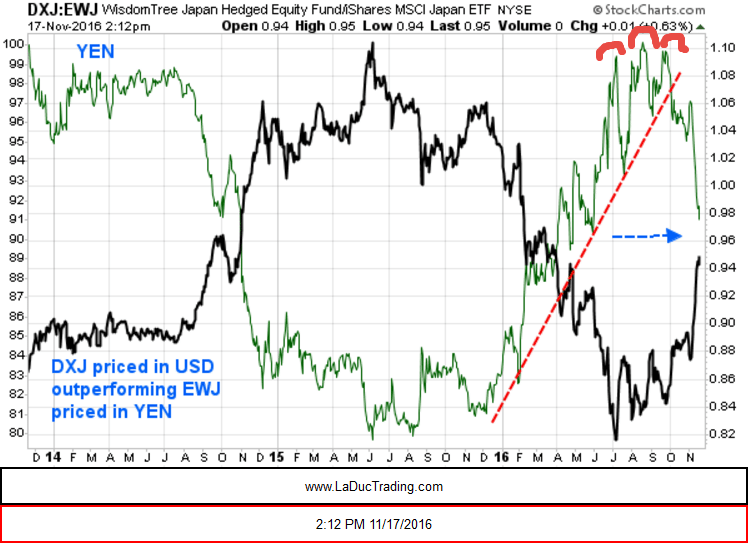 After some digestion, I don’t see why the Yen short wouldn’t continue, especially since I expect the US Dollar to advance. A rising $USD is de facto tightening so it’s doing the FEDs work for them, sort of.

Long story short, with China devaluing their Yuan on purpose and the Euro falling by default (literally, Italy next?), and US rates and dollar rising…why wouldn’t the Yen continue to have pressure especially since their government is throwing billions at it to make it so?