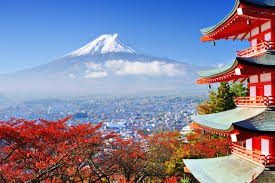 Much attention of late has been focused, with good reason, on rising yields, falling bond prices and the collapse in the Japanese Yen and Gold. So many assets are correlated that as a strategic technical analyst I look for macro themes to show themselves in intermarket chart analysis so I can more confidently basket trade, which is the oppositie of diversification. One such theme I leveraged, and the charts that supported my macro analysis, was “Japan as The Tell”.

Before Trump There Was Japan

I’m very fond of the 10 year Treasury chart. I know how it can move markets. Looking at historical charts and waxing philosophically about potential future rates, inflation and market impact does nothing for my day-to-day trading results however. So here is how I traded around a Thesis of Higher Yields with Japan as The Tell.

It began with Japan not Trump. Back on Sept 21st I wrote that I believed the 10 yr yield on JGB was just beneath the zero rate for the last time. With the BOJ setting the new cap on benchmark rates at zero, my bet was that they would defend 100 USD/YEN and that the FED would somehow help (Bernake advises the BOJ).

My Macro Thesis: The BOJ policy announced in September to peg the Japanese 10 year government bond yield to zero was akin to unlimited QE, and that meant devaluing the yen to prop up Japanese equities.

My Trade Trigger: I watched for US yields and dollar to trigger a run at the same time my FXY chart triggered short October 4th. With that I had my Trade Set-ups to go long the USD and FXY short. My thesis on Gold was simple: it would lose its luster as negative world yields turned positive, driven in large part by US yields, making the risk/reward of holding gold less desirable over dollars for example. GLD GDX were my proxies short. Even before the election, my October Macro View Note was predicated on the fact that FXY would lead GLD GDX TLT lower while rates would lead banks higher.

Let’s Go To The Charts

I am an options trader so when I want to trade currencies I tend to use their ETF equivalents. FXY is the vehicle I use to trade the Yen. I like to pullback in time to spot chart patterns and this weekly chart behaved very technically from the moving average crossovers at both the ~$125 top and $80 bottom area as well as the head & shoulder formation forming in the $96-94 area this summer. The MACD crossover combined with my macro thesis helped me keep eyes on the prize. 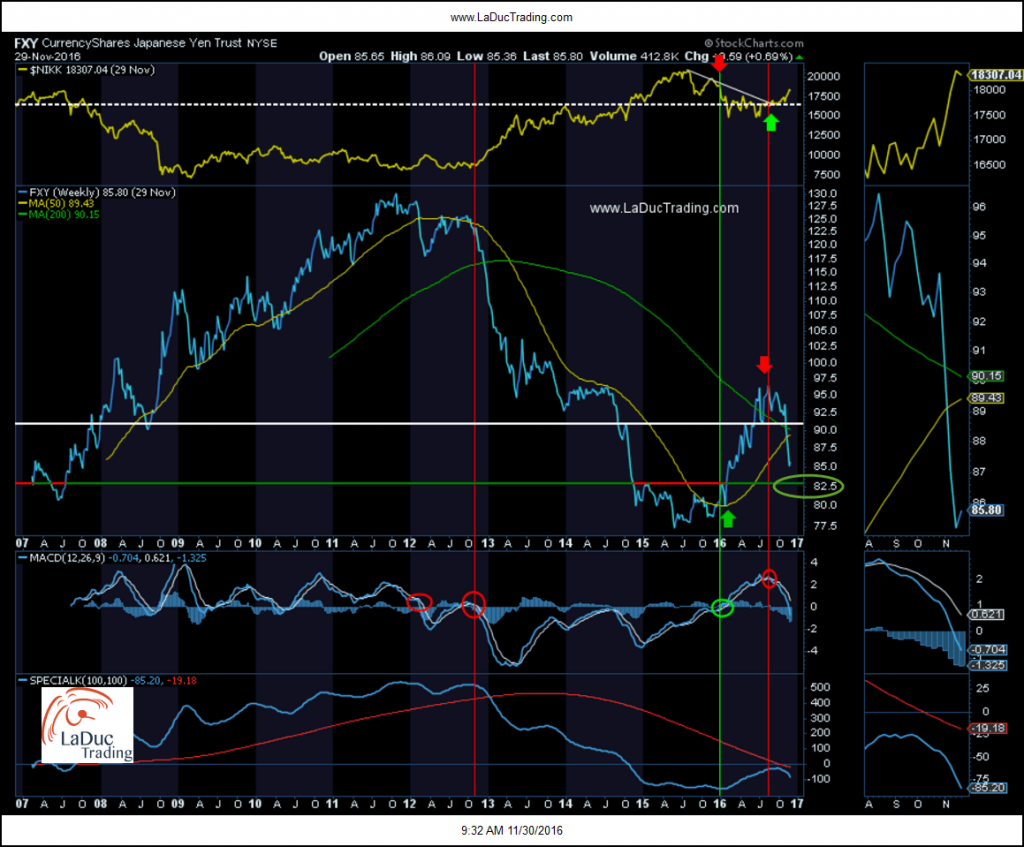 Then I got busy on a granular level. The daily chart of FXY was foretelling a nice short on Oct 2nd at the $95 level. It had tested that 50D moving average seven times in 2016 so the probability that it would break was gaining in my mind. 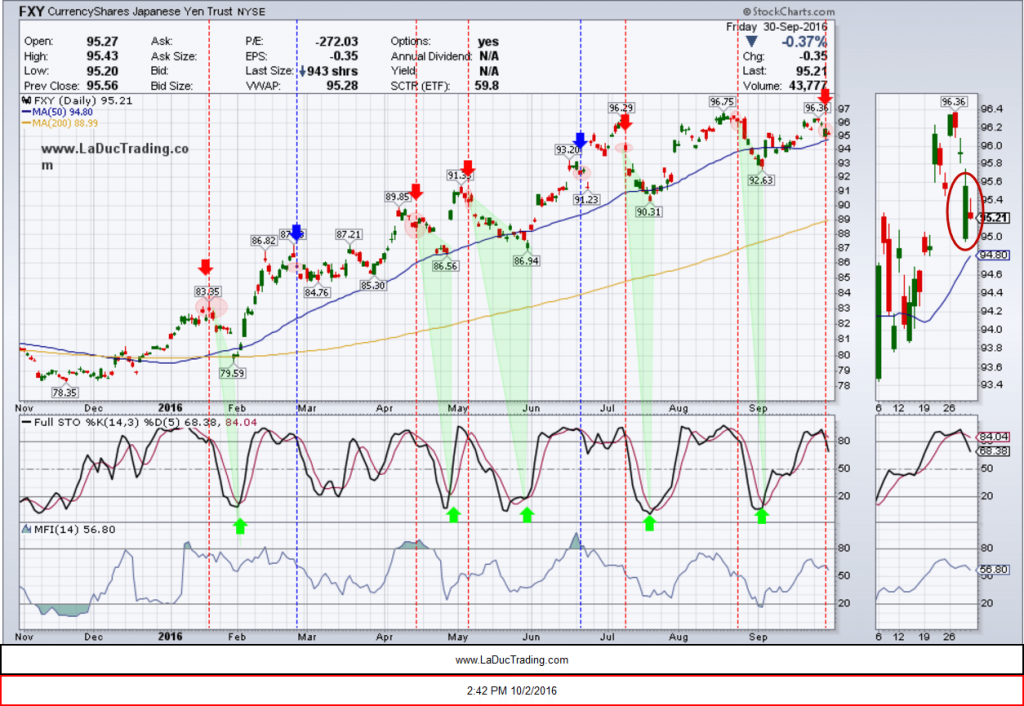 Two months later, here’s the same chart (which I updated frequently on my twitter feed @SamanthaLaDuc). It broke the 50D and despite a brief bounce, it never got above and was straight down from there.

Here’s a view of FXY from my charting platform. I thought it would bounce at weekly support and the 200D around $90. It gapped clear under it, a sign that all correlated assets like Gold, Bonds, and Currencies had farther to fall; and US Dollar, Yields, and Banks had farther to rise. 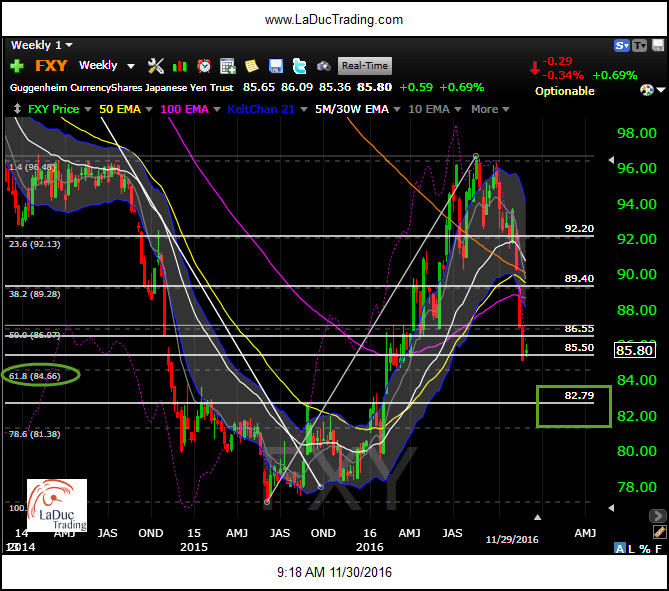 Another view on the FXY trade was how I would play the Nikkei, again using a US-based ETF. The DXJ had a clear inverse relationship to the Yen so going long DXJ (over EWJ) made sense. And with that, so did following the large Unusual Option Activity in DXJ. 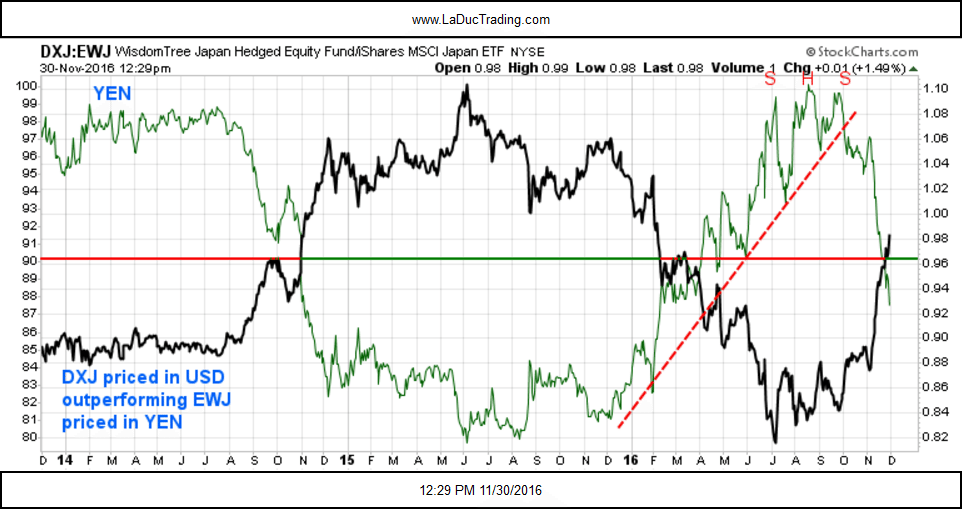 My focus was on the Bond/Gold short thesis however. Here is my cycle work that helped me gain confidence and better position entries in my basket trading approach. 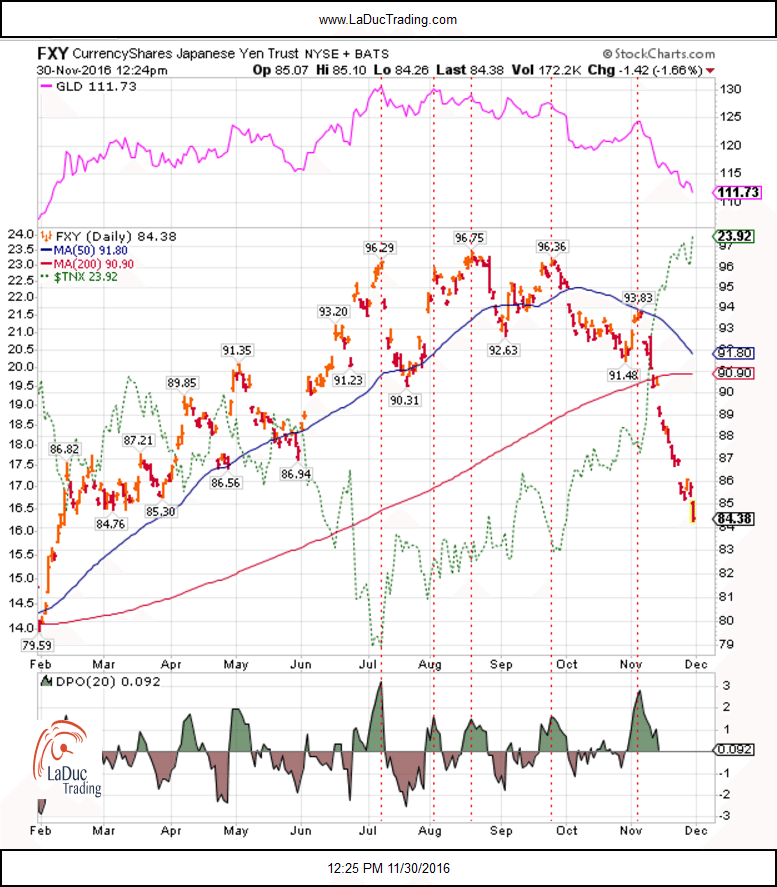 Yen/FXY Is Due A Bounce But Then What

Yen and Gold are both at the 61.8 Fibonacci Retracement level so I would not be surprised to see some pretty nice bounces in all correlated assets, but I also believe the move down is not done. With Japan keeping its long-term rate pegged to zero, it seems it will just print Yen until it gets the inflation it wants. It appears they see no alternative to inciting inflation, spending freely, and devaluing the yen in an effort to monetize their huge and unsustainable debt burden. Not sure how else to view this besides dollar bullish. Also, a rising USD is de facto tightening so it’s doing the FEDs work for them until US growth metrics can justify more rate increases. Oh yeah, and the chart of USD has time on its side based on past cycle analysis.

Japan is the world’s 3rd largest economy and our 4th largest trading partner, so there is a lot at stake for the US to support them. With China devaluing their Yuan on purpose and the Euro falling by default (literally, Italy next?), and the US rates and dollar rising…why wouldn’t the Yen continue to have pressure especially since their government is throwing billions at it to make it so? Personally, I would much rather swim with the current than against it, so I will continue to follow Japan very closely before trading its correlated assets of Bonds, Gold and World Currencies.