Gone Fishing Newsletter: Sell Into a Recession – Buy Out Of a Recession

There is no question in my mind that the U.S. economy is in a recession. I have said as much for weeks in my live trading room. I have also preached:

Sell INTO a Recession

Buy OUT OF a Recession

I shared this with clients March 11th: The brutal new GS path of $SPY EPS negative growth, and with that, what do you think will occur in my Fave Chart of 2020 – GAAPSPX (follows below): 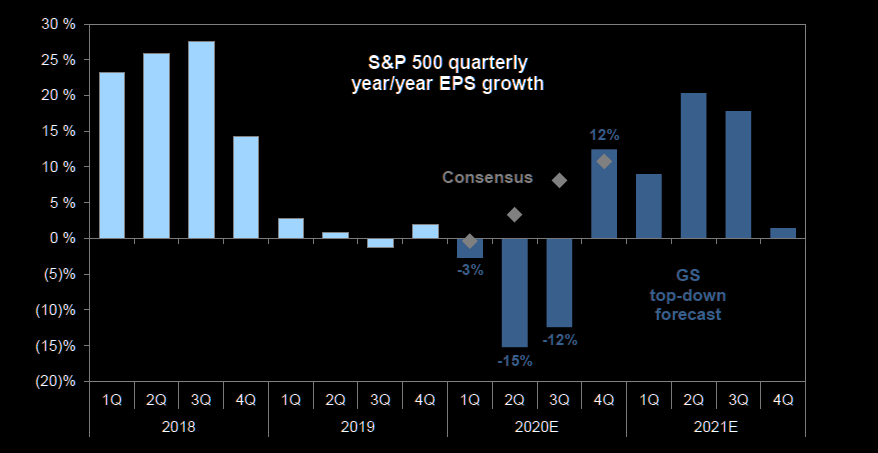 It’s clear that a Trend Reversal signal will be triggered and confirmed in my following GAAPSPX chart. My Intermarket Tell has been right 8 out of the last 9 times to indicate major market turns, but I don’t even need it to confirm COVID19 will change everything in our markets and economy for the foreseeable future.

I further contend that the market and economy are NOT SAFE until we see unmistakable signs of progress – both in our government taking a leadership roll to address the devastating affects on Americans’ health and wealth from COVID19. Call it the market’s “virus discount” that will continue to fuel liquidation waves until we have actually experienced the worst of it.

Here’s my best metaphor: No one really comprehends the power of a tsunami until they are hit by it. Assuming they make it out alive. My advice to clients for weeks: Just go inland. And then we will not only be in a position to help rebuild after surveying the storm damage, but also be able to buy those companies that survive and are at lowest price points.

There is no stopping a tsunami. The trick is to survive it.

From my March 10th warning that this was a FINANCIAL CRISIS not Correction to my March 13th Client Note and ForexAnalytix Interview, where I reiterated my bearish market theme:

Repeatedly I have asserted through THIS market drawdown that it would not be like the others. A gander at any chart with prove this out. Sellers have stepped away from the Ask and relentlessly hit the Bid as if price-insensitive! But, it does not resemble 2008 in a few unique ways.

I stand by this call still. And as clients in my live trading room know, I have called this crash from Tues Feb 18th $SPX $3375 to $2400 this week – even noting the yearly support of $2277 that likely gets tagged. And it did.

But we NEED a big ol’ bi-partisan fiscal stimulus bill approved ASAP if we are to bounce. It is the only thing – other than a vaccine or cure – to bide US time to deal with:

As Trump continues to deflect blame to China and ignore months of warnings, and with every COVID19 headline of climbing death rates and cries of supply shortages, and as Americans continue to suffer under the weigh of unemployment and lost company revenues, we risk breaking this YEARLY support level of $2277 in SPY as more stops trigger amidst both forced and natural selling. I see no stabilization yet: Oil, Credit, Bonds, USD, Equities all in RISK OFF mode.

With that, I have also presented to clients early that I see SPY overshooting to the downside ~$1700 before stabilization. I firmly stated I do NOT see a V-shaped recovery like Goldman. In fact, I went on record Monday February 24th that I did not see us reaching all-time-highs this year!

I did see an early case where I predicted bear market rallies – tradable on the way down. I now think, as posted Wednesday, that the markets are so broken that we may not even bounce at yearly pivot of $2277 but instead continue to break down as firms continue to deleverage and go to cash. This would feed a negative feedback look and be frighteningly difficult for the USD world liquidity shortage.

If I’m correct, $DXY can fly to $120 – faster than Fed, Emerging Markets and Equities can handle. And when it does, USD will break spirits + bank accounts on the way up and nations + world peace on the way down. It is still NOT SAFE. 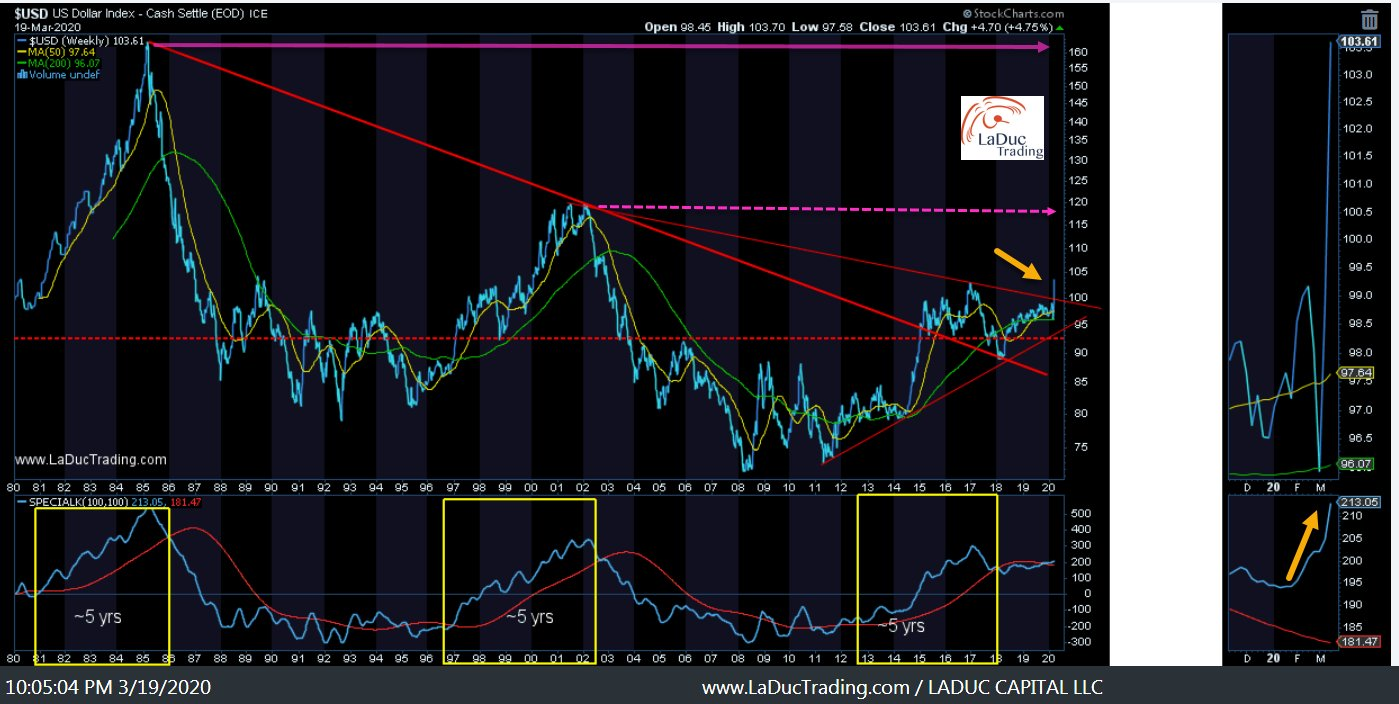 I spied this Thrusday when the ROC for $TED was a NEVER BEFORE record at 837%. 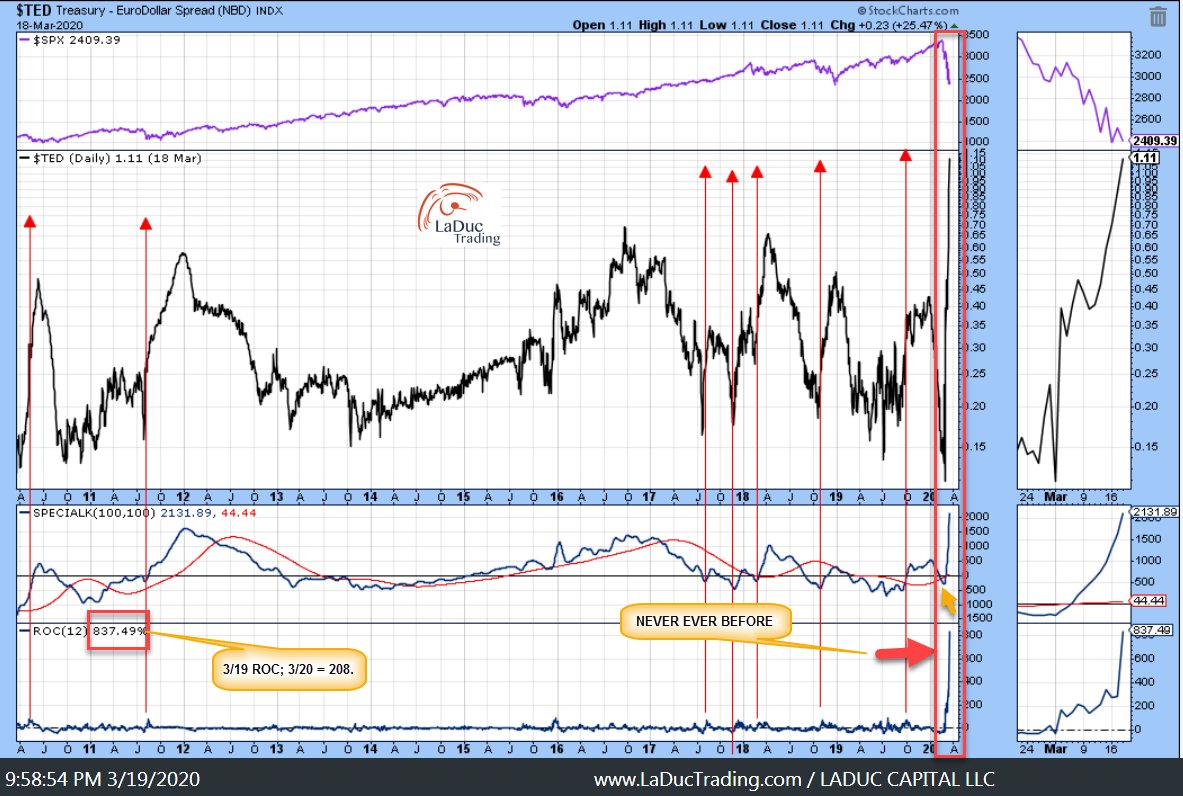 Back in 2008, it took the Fed about 6 weeks to break the TED spike with currency swaps + QE. My Bet: USD is about to spike hard and that will kick off the next phase of selling/deleveraging/liquidation.

Again, my mantra until it isn’t:

THIS IS NOT CAPITULATION

As much as equities have sold off, there still seems to be a fire burning below them:

Literally everything I'm hearing from ppl trading munis, MBS, CMBS, commercial paper, credit suggests that things are as bad as they can get and nothing is going to change until

USD may make the weather, but Credit markets determine the season. I contend we are just in the Fall season of the sell-off moving into Winter.

As soon as there’s clear evidence that we’re winning the war against the coronavirus, then financial markets will respond. Until further notice, all vaccine and treatments news is economic and financial news. Eddy Elfenbein

With that, and as I have been saying since this downdraft started: Expect Tech to sell off least in the early innings (“They will defend Tech with their dying hands!”) until the next wave of USD strength triggers margin calls, redemptions and rotation into CASH. Keep in mind, massive dislocation can occur once $AAPL $MSFT (FAANMG) sell off en masse. So far we have come close to SPY setting 2 circuit breakers in a day (this past Monday). Can we do 3? This is the real danger of passive investing indices joining the Risk Off party. Everyone who bought the same stocks on the way up will sell the same stocks on the way down.

Our economic and political systems are undergoing an existential stress of potential collapse from CoronaVirus on the heels of dangerous financial engineering in both monetary and financial markets. This paradigm shift is happening before our eyes in the market and at an unprecedented rapid speed. Capitalists are becoming Socialists and Politicians are transforming capital markets into political utilities at a time of historical personal, corporate and sovereign debt. It’s the worst time to have both a national healthcare, monetary, economic, market and leadership crisis.

Growing out from under massive debt is not in the cards any time soon. Shrinking our way out through austerity is massively unpopular. Inflating away losses worked for the equities market using stock buybacks, but that is going away as an option in response to financial, populist and political pushback. How governments work to stabilize the labor force will determine our chances of avoiding default risks.

The best analogy I can find is when Franklin D. Roosevelt changed the then-popular notion of governments role in the labor market – back in 1933 – after the 1929 stock market crash. It took 4 years for the market to find its bottom before FDR was able to affect massive economic and political change.

Another words: this could take awhile.