While Congress failed to act…

Today: The Fed announced a second wave of initiatives, including buying an unlimited amount of bonds and setting up programs to ensure credit flows to corporations and state and local governments. It’ll buy Treasuries and agency mortgage-backed securities “in the amounts needed to support smooth market functioning and effective transmission of monetary policy.” Bloomberg

Unlimited QE sounds sooo bullish. But the resumption of large-scale asset purchases by the Fed will only lead to even more volatility and even more selling of stocks. Fed helped cause the disease of excessive risk-taking and financial engineering! They can’t cure it. Sadly, they only make it worse. 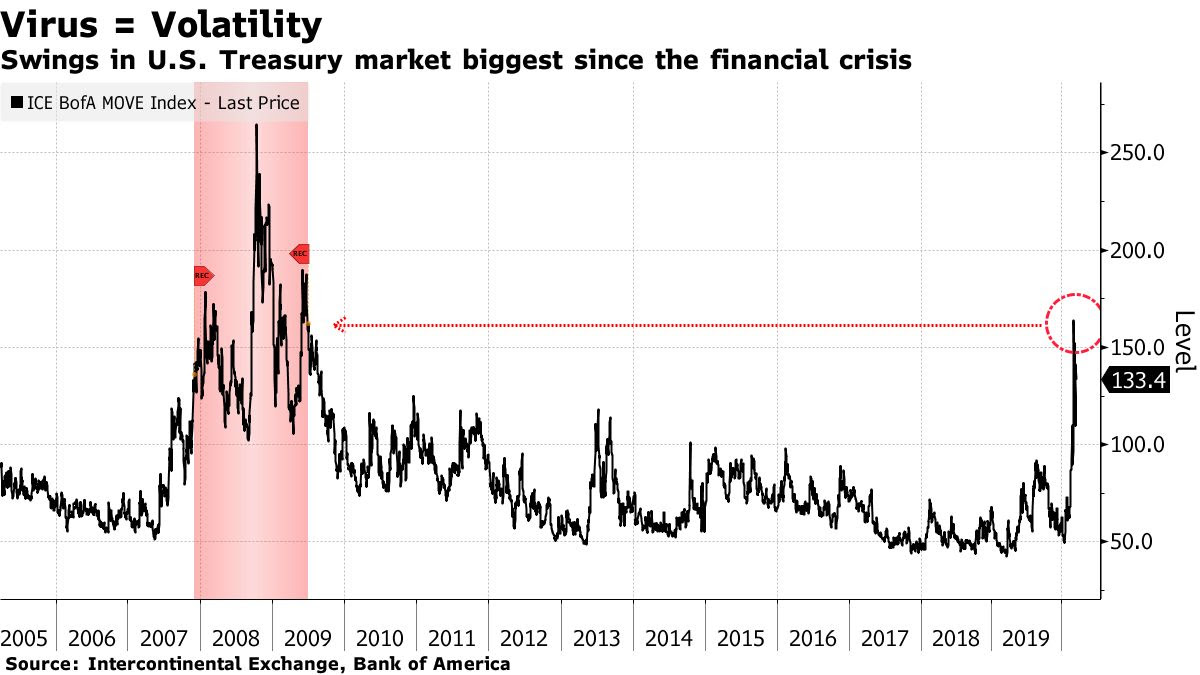 Translation: Fed has no ammo left. We are waiting on Congress to act and act in our nation’s best interests – not corporations.

COVID19 ‘Cure Worse Than The Disease’

Trump is considering reversing the mitigation path of self-isolation to ‘flatten the curve’ for COVID19. Goldman Sach’s CEO tweeted as much as well. As horrifying a thought as this is to many, here is the debate:

So what is ‘the cost’ of this plague on individual health – and not just the deaths from COVID19 but from others suffering from unrelated health conditions while healthcare system is crashing while attempting to care for people with COVID19?

For a look at the human cost, I suggest this analysis: Coronavirus: The Hammer and the Dance – What the Next 18 Months Can Look Like, if Leaders Buy Us Time

And a call out for a great podcast I have recommended before: Michael Osterholm said it beston Joe Rogan Episode #1439 – “Winter is coming”

What’s ‘worse’: loss of human lives or the economic calamity that can result from the fundamentally destabilizing impact of an economy on ‘life support’ during self-isolation?

Does it make sense to leave OPEN financial markets which don’t know how to price such an outcome?

It’s getting harder for me to read what comes immediately next.

I called this live from Tues Feb 18th $SPX $3375 to $2277. I see lower next quarter (SPX $1700-1800), but my base case is that the COVID19 tsunami is yet to hit the shores (hospitalizations, death rate) next few weeks, and when it does, stock market will close regardless of Congress passing a fiscal stimulus bill.

After repeatedly warning that there has been MASSIVE DISTRIBUTION under the surface since February 25th, I still see the risk of MASSIVE REDEMPTIONS across sovereign wealth funds, hedge funds, fixed income funds… I do not see the deleveraging as over let alone a ‘fair value’ for COVID19 priced into the market.

From my “market looks like it’s gonna break” on Tuesday February 18th to now, market is still broken and I don’t see it as safe:

February 26th: That gap down on Monday – that everyone thinks will get filled quickly – won’t if this chart has anything to say about it. The breadth under the surface – not FAANMG yet as they ‘held’ relative to everything else – masks cumulative 4wk new high/new lows as worst day EVAH = Liquidation! Market participants knew the “economic expectations” from COVID-19 before Friday…but needed time to get out. Clearly a Sold-to-You market – when stocks defied logic moving aggressively higher since 1/27 – turned Forced Selling – when CTA levels triggered $3235. Now we need $3285 to even consider being swing bullish. Medium term and longer term trendfollowing CTAs (largest group by AUM) have slower look-back windows. I contend they have clearly flipped and are building shorts. Monday was foreplay. This will accelerate. The break of all time lows in the 10-year was further proof and further trigger.

You can scroll through Live Trading Room recordings or any client post, I repeatedly pose and answer the question: Is It Safe? Last Sunday, I warned clients, still, that Preparation Is Not Panic. And then again a few days before on Friday March 13th that this market was worse than 2008.

Last week was the worst week on record since 2008! Midweek I alerted clients that selling would continue:

I now think, as posted Wednesday, that the markets are so broken that we may not even bounce at yearly pivot of $2277 but instead continue to break down as firms continue to deleverage and go to cash. This would feed a negative feedback look and be frighteningly difficult for the USD world liquidity shortage.

I will admit, as we move into end of month, I am looking for some ‘Green Shoots’ now that we have hit some key price targets, but I am also highly suspect that any bounce will be defended. In fact, I feel the danger of not having a bounce is in fact a greater risk to market stability.

When you consider that we have robust volume but poor liquidity that tells me we have traders paying spread to get filled and this pushes price distribution wider. Our model suggests that market makers are rather price insensitive when hedging, and combined with poor liquidity provides the basis for compounding large swings in the SPX. Therefore I’d view any type of lower negative gamma and decreased implied volatility (VIX) as a positive for markets as it reduces market maker hedging volume. Even a fractional amount of stability would help to instill some confidence here. @SpotGamma

What will be there according to analysts is pension funds who will be doing the rebalance dance at the end of the quarter.  Estimates are for US$150 billion plus in equity purchases required as bonds are sold. This could be the largest rebalance ever. According to The Bear Trap Report, the December 2018 decline was halted by just $60 billion of an equity rebalance.

So, this is what “whatever it takes” looks like when the U.S. economy comes to a halt. They backstop everything.
Combine this, with a $2 trillion fiscal package — that comes with cash drops to the American public and small businesses, and will likely come with the U.S government supplying cash to major corporations (namely airlines) for exchange for equity stakes — and you have: 1) the government explicitly involved in propping up the stock market, and 2) a brew for massive inflation when we come out on the other side of the virus. @BryanatLogic

So many are anticipating a sizable bounce on the eventual passing of a bi-partisan CoronaVirus relief package to help Americans in their time of need. Problem is few expect any sized program to really help the wide-spread contagion of economic stress. Others worry it will be  siphoned off to bail out companies versus households, triggering backlash and folks taking to the streets in protest – bearing arms. Mostly, I look at the historical precedence of failed fiscal bills and the ensuing sell-offs even after passed: 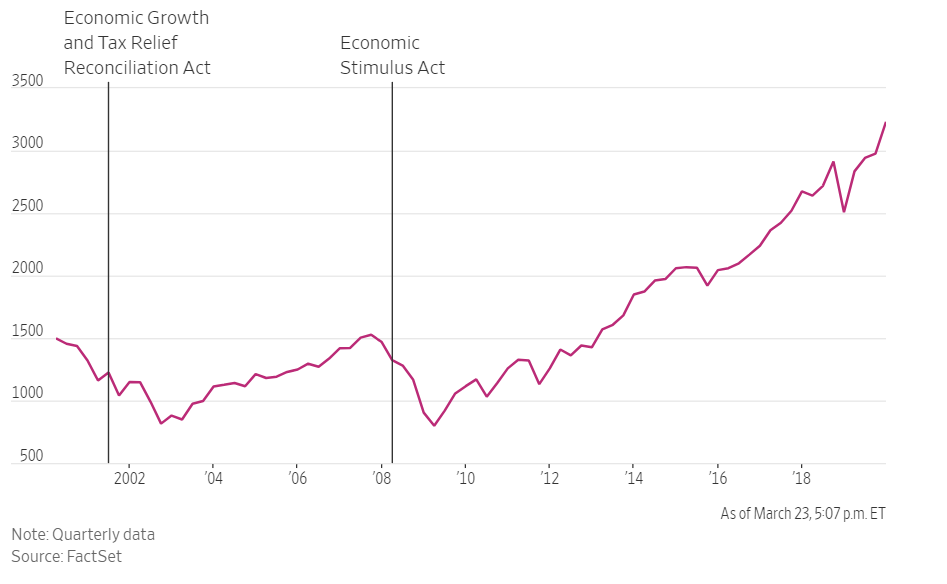 The above chart leads me to some SPY targets still in play:

I’ve been saying that for a few weeks.

This is LEAST appreciated fallout of global pandemic & economic shock. ⁦@IIF⁩ reports that EM has more than $4.3T in debt coming due through yearned 2020, $730B in FX debt. We know this is an exogenous shock. That does NOT negate PRE-COVID vulnerability.

Can’t see how we safely navigate socializing losses for more than a trade, print our way out of insolvency, restore personal+monetary confidence...

@SamanthaLaDuc Samantha, I remember your original remark about a “crisis”. Was hoping maybe that would evaporate somehow. I take it from this tweet, you’re standing by it? Ugh. Stomach turning.

“Not a Correction but a Financial Crisis” and it will be

This mkt continues to trade like Oct 08. It was six months and another 25% down before the low.