The rally in safe haven assets such as Treasuries and the US Dollar, while equities have sold off sequentially week-to-week, is raising worries that the economy is in trouble but stocks don’t know how badly yet. Will we sell off in a more pronounced correction that puts at risk the equity bull market’s 10-year run? My thinking: Flash Crash or Sideways-to-Lower into 2020 election (or a Trade Deal – whichever comes first)! The Flash Crash prediction I suggested once NYSE tags and reverses off $13,000 may now be underway.

I am an unabashed bear – from Macro to Micro – once NYSE hit $13000, in part because these Intermarket Tells provided me the roadmap for when to enter and exit the past two years! None was a better tell for and gave me extreme confidence when we topped Jan 2018 (most overbought MACD in history of NYSE). In combination with other factors (like the rate of change of the 10 yr rate spike at the time), I was also strongly convicted when I called the Oct 3rd correction and then Dec 12th the Dec V-shaped rally. But man-oh-man did I get pushback on my most recent market timing call for a Trend Reversal at NYSE $13,000. And no, I had no idea Trump would declare Trade War on practically every trading partner we have! Well, I’m still bearish Intermediate-term and not even a June Rate Cut will change my mind – only price – and that means NYSE getting and staying above the red trend-line – but I don’t think it has much of a chance until the dotted white trend-line is tested at the least. Which means, it’s going to be a long summer… 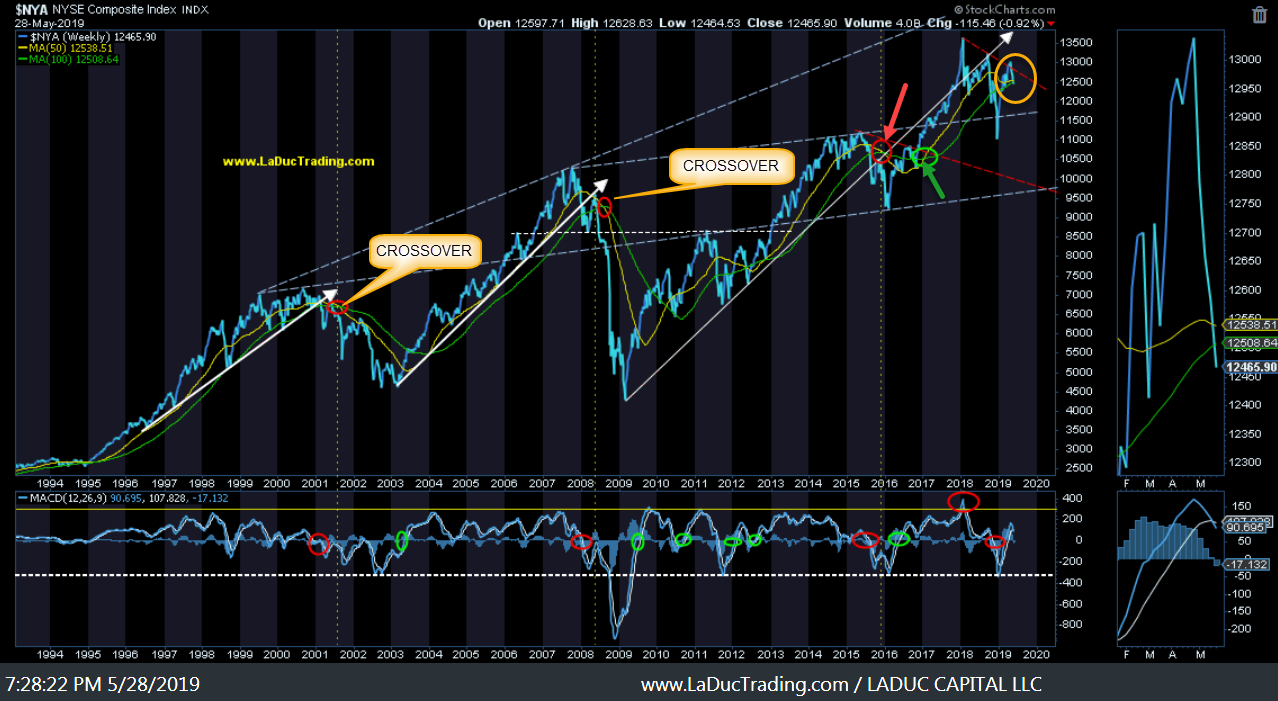 Here is an updated, detailed look comparing NYA Composite with my fave indicator, Bullish Percent Index. Clearly breadth broke-down before price and now price has clearly caught up with the break-down narrative: 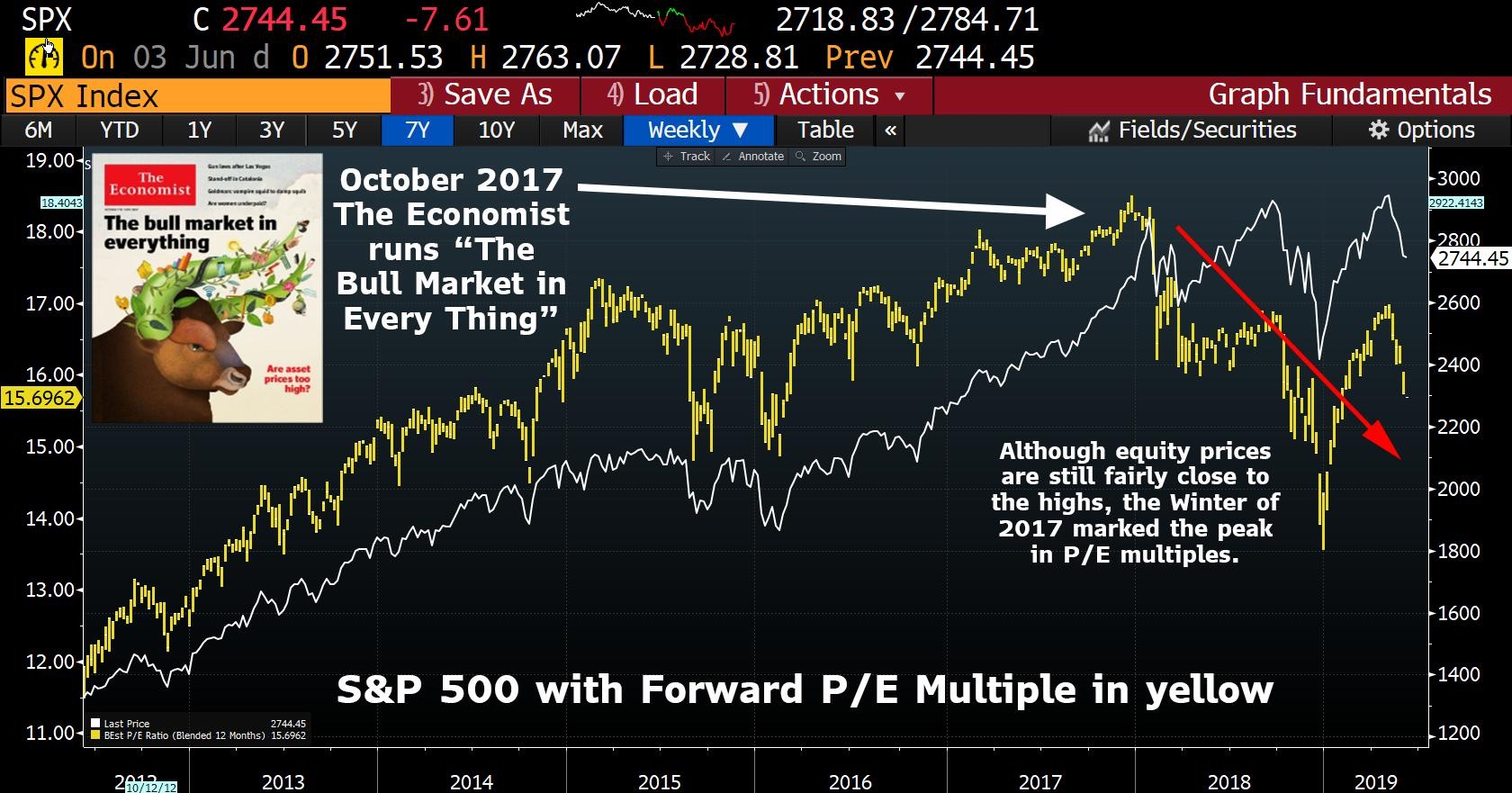 Headline GDP and Unemployment figures give a false sense of calm. The divergences between bad data and price appreciation in the indices are growing.

While China tries to temper buying euphoria in its stock market – wherein Analysts Downgrade China’s Stocks at Fastest Clip Since 2011 via Bloomberg – US is throwing everything at its market to make it go up! While China is shutting down Bitcoin – as a way to keep Chinese Yuan from leaving/converting to US Dollars – US fiscal and monetary policies are working to deflate the USD against the growing demand by emerging markets for more USD! Samantha LaDuc

Top 5 Reasons To Be A Bull:

So What’s The Bear Case?

Global Trends Are Not Our Friend

I recently wrote an article for See It Market – There’s A Lot Not Priced In – with key macro themes I believe are not priced into the market with a follow up article – Big Picture Trends. Here’s the quick summary:

As much as the Trade War can be attributed to slowdown in a number of key areas – World Trade Volumes that impact Freight and Manufacturing Slowdowns; Tariffs that can decrease Consumer Spending and contract Company Profits/Revenues – the Auto Industry weakness – the economic slowdown points to structural weakness in the US Economy that Trade Wars will compound – even if the stock market doesn’t know it yet, or worse, even if they expect Powell to save them.

My USD Triggers and Consequences

Here are the Top Five that hold my attention:

A break, and we are probably into the next and most destructive phase of $ rally. – @RaoulGMI 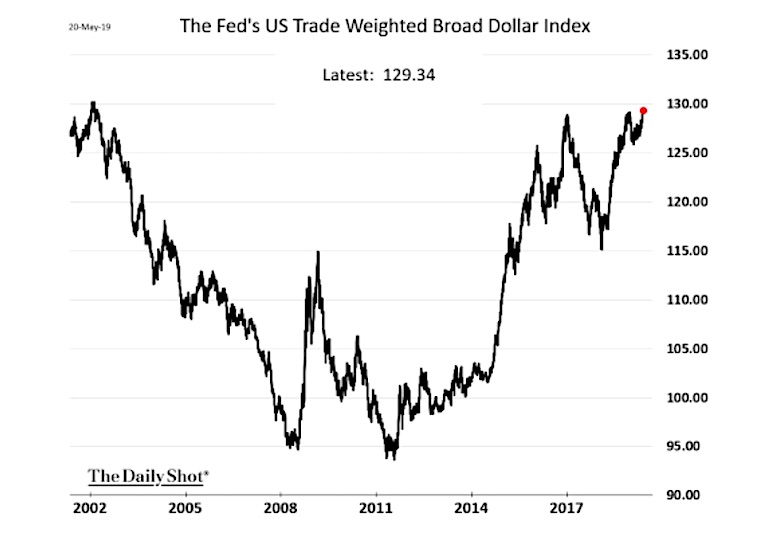 What to Expect from NFP and the R-Word

Non Farm Payrolls (NFP) are released Friday morning. Markets have had the mighty tailwind of ever decreasing employment rates and strong job gains during this past long cycle post Great Financial Crisis. Given all of the faltering, in some cases shocking, US and Global economic data signifying slowdown, NFP seems the last indicator of impenetrable strength that Wall Street and die-hard Bulls are hanging their hat on.

Problem is,  we have had 9 months in a row of year over year increase in layoffs. In short, Layoffs have been climbing but not yet “showing up” in NFP and employment rates. Having said that, we’re close. It’s the last great lagging indicator to turn before Recession fears truly appear.

Recessions “cause” unemployment rate to go up, not the other way around (the UR is a lagging indicator)…employment works like this: H/T Liz Sonders

We have a “Goldilocks” market that can quickly turn into the Three Bears of “Layoffs, Unemployment Claims and Payrolls” chasing her out of the house! 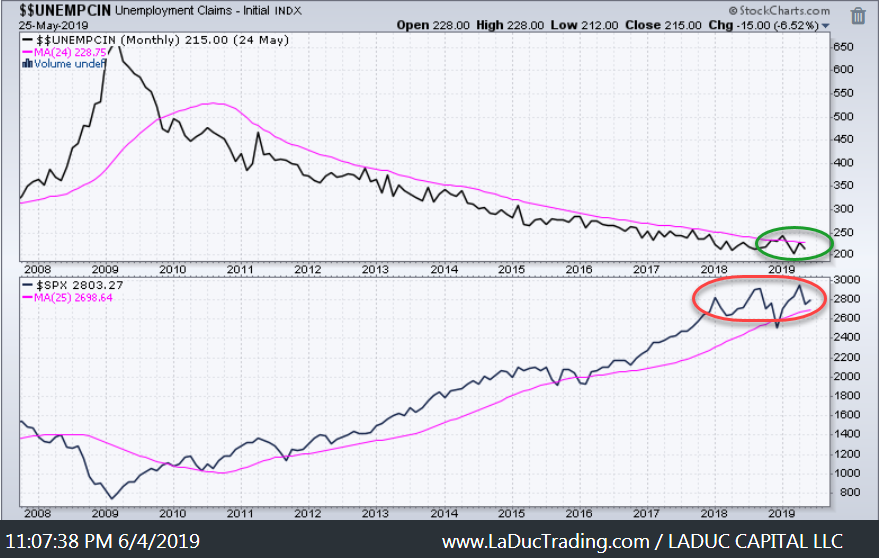 What To Expect From Powell

U.S. INTEREST RATE TRADERS are now pricing in almost two full cuts in the fed funds target before the end of the year. Fed funds futures for Jan 2020 imply an expected rate of just 1.95%compared with current rate of 2.39% (and target of 2.25-2.50%). U.S. TREASURY YIELD CURVE is moving deeper into inverted territory — with 10-yr note rates now more than 19 basis points below 3-month bills. U.S. TREASURY YIELD CURVE inversion is anticipating highest likelihood of recession since 2007 (before 2008 downturn). Recession risk is now well above levels that preceded recessions in 2001 and 1990:

My Take: Powell is loathe to cut, but he is intonating Fed will cut! No less than 13 Fed Heads out this week preparing the stage and Powell acknowledging “Inflation Shortcomings” at his recent speech Monday night. Rate traders have already front-run this move. Higher USD has been defacto tightening. But here’s what I see – a case for a knee-jerk reaction higher ($2880 SPX for example), before a retreat lower with gusto.

Most don’t expect that if Fed cuts the 10-year yields go UP not down – as market prices in “better economy” – steepening the yield curve. And … Here’s a friendly reminder of what can happen AFTER the Fed cuts: Recession. And judging from the ‘over-tightening’ implied (see chart below) compared to prior cycles, that may be why the bond market is aggressively leading the anticipated rate cut AND why both bond and equity markets are interpreting it as recessionary. 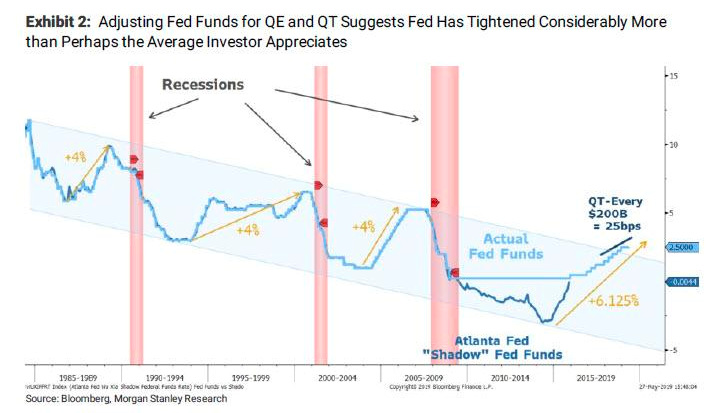 My Take: There’s a good chance market has an initial knee-jerk reaction higher ($2880 SPX for example), before a retreat lower with gusto. A big surprise in NFP may excite the bulls to buy equities on expectations the Fed will cut, but the diminishing returns of driving up assets on bad data and bad news is as safe as Goldilocks being chased out of the house as the Three Bears return home!

Treasury Volatility Is On The MOVE

Back on March 20 of this year, I posted the $MOVE Index Bond Volatility chart and wrote “Brace for Impact!”. Since then it rose 50% to 60.58 as of last Friday.

One theory I posted for it rise was based on Term Premium trading at a discount for 1st time in 50yrs and suggested that those who got caught selling volatility had to hedge by effectively going long Treasuries. Maybe this “Bond Convexity” was the reason for the recent 100bp move in the past 6 months. Looking back it is clear the treasury market was front-running risk of recession and/or future rate cuts. A break higher in MOVE would be quite market-moving – to the downside. 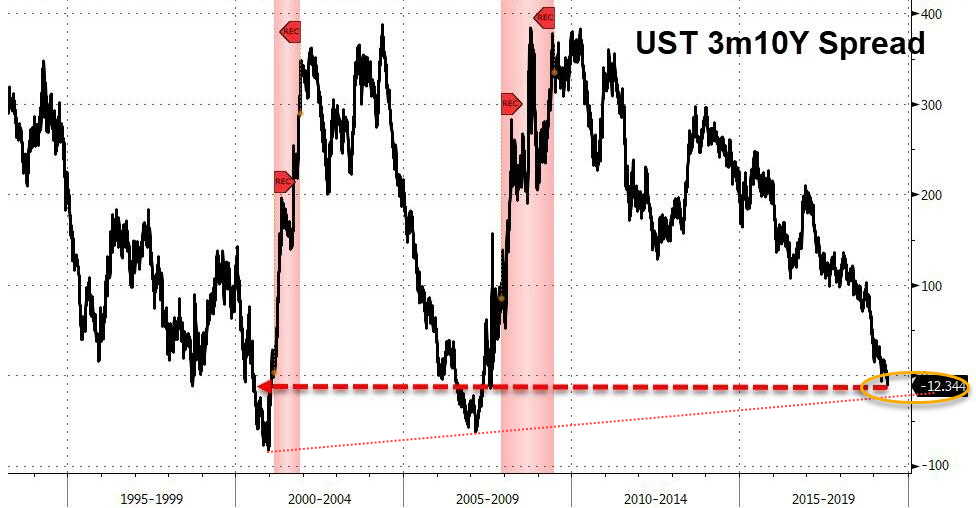 These moves in yields don’t look done – neither from the above Treasury Volatility MOVE chart (breaking up) or the following descending wedge on the 10-year (breaking out). After a suitable bounce off the red trend-line, I would suspect yields fall further this summer. The bond market is intonating 10-year rates are going lower to 2.0. 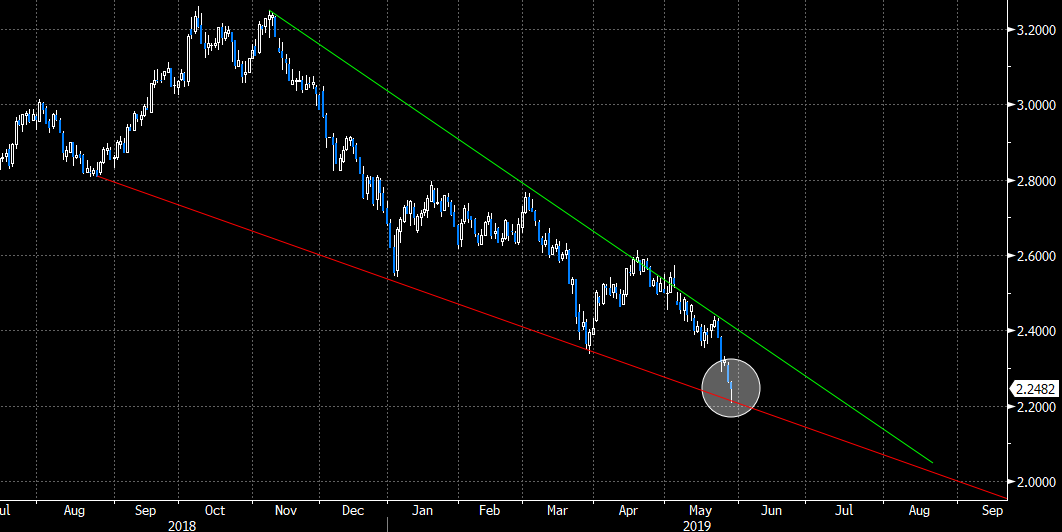 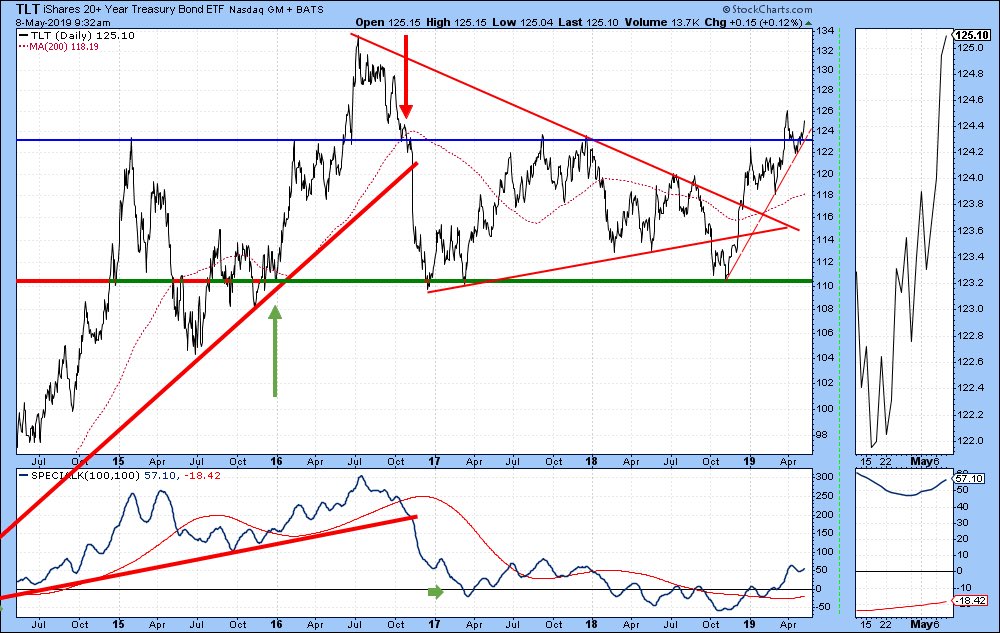 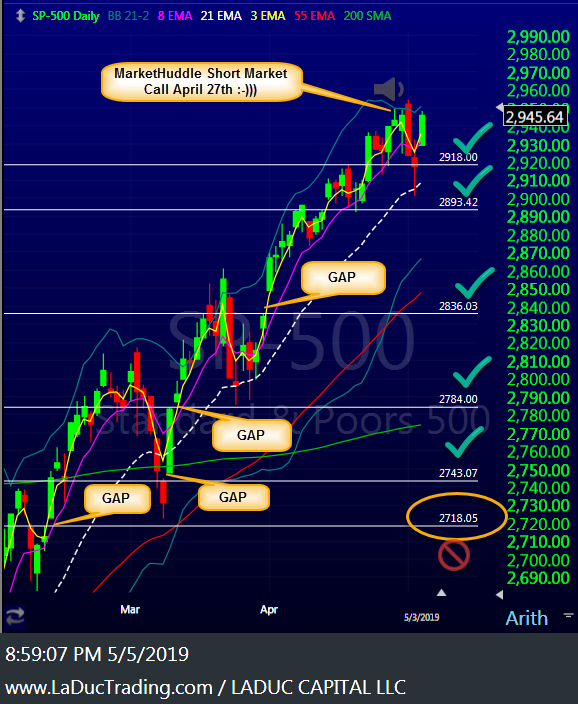 We have experienced a lot of disinflationary headwinds from the synchronized global slowdown and ultra loose monetary policies in the US, Europe and Asia specifically but globally in general. What could change these disinflationary headwinds into inflationary tailwinds as a result of or separate from the geopolitical events like US-China Trade Deal collapse and hard Brexit? The biggest one: the collapse of the US dollar as the global reserve currency. Am I expecting that any time soon? No. Given the whole wide world is awash in debt, we won’t likely see the World’s Reserve Currency of the USD until other countries start to liquidate their US Treasury holdings. And given the size of US market buyers – Blackrock et al – that supply would likely be absorbed. At least, we need to hope it will be. If not, there is NO safety in stocks or bonds. Everyone will buy Gold and every penny-stock gold mining shop will rise 1000 fold.

With that, the small USD pullback did not cause the recent violent move higher in Gold. It was just added fuel.

Here’s what I’m looking at for levels in FXY : 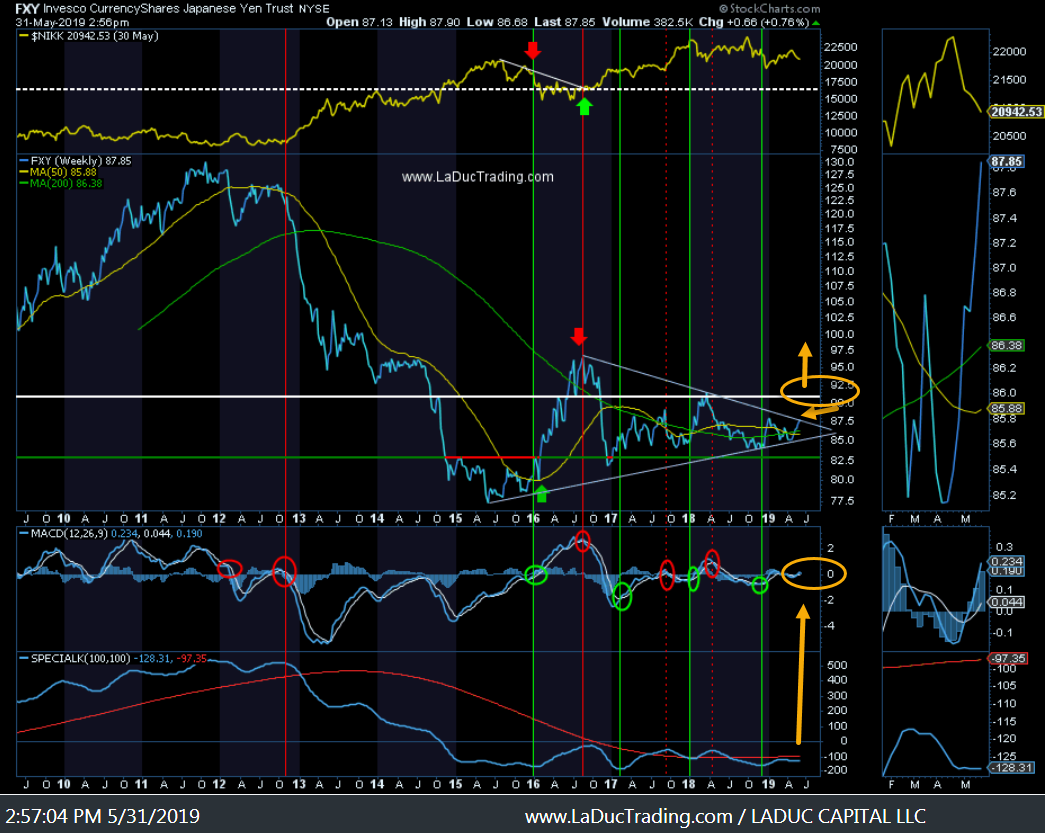 Thank you VERY MUCH, Tyler for this interview/interest, your lovely introduction and most of all your time and sharing my Macro-To-Micro approach with your DailyFX audience!!