Perception Versus Reality. That is what we are all testing out against our market analysis each and every day.

I can’t see a better example of that then my knowledge of how structural, bullish, capital flow has on market pricing and yet how I *see* the cracks of diminishing return with every tick higher.

So despite that summation of compelling Capital Flows, why on earth would I ever want to lean let alone trade short? Here’s my attempt to convince myself:

When Global money supply diverged from market price, beginning of July, it became a “Sold-to-You” market in my eyes. As a result, I am still expecting SPX to take out recent lows and trade sideways-to-lower into 2020 elections. 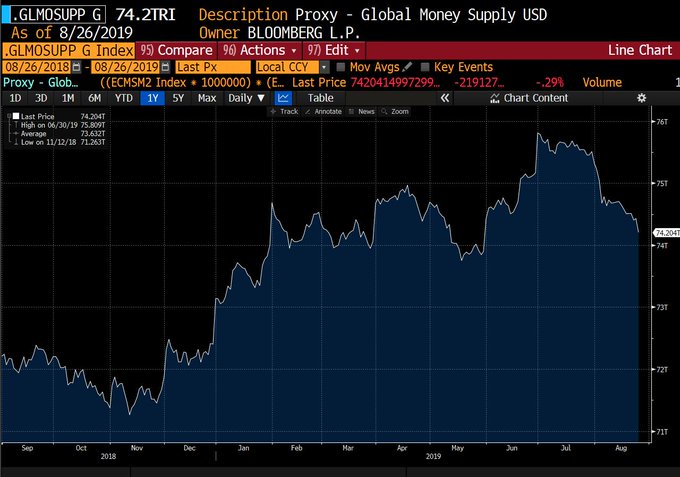 About That Dividend Yield

The dividend yield on the S&P 500 exceeds the 30-year Treasury yield. Last and only time that happened in the last 40 years was during the crisis as per Bespoke.

So, in my book that means: only stocks if you expect Volatility to fall.

And you know my position on Volatility: Volatility Reprices Everything

No question, Trade Wars have a big impact on confidence, investment, margins and growth, but you wouldn’t know it from either America’s stock market or China’s. In fact, China is not faring as bad as most think under Trump’s Trade War because China is exporting more to non-US countries for the shortfall, and getting higher prices paid for them. Although the credit backdrop is unstable, and their economic growth is slowing, the direct effects from Trump’s Trade War look muted as China enlists currency tricks and other tools.

One reason why the US has yet to really price in the the effects:

Having said that, the USD had been lifted due to the Trade War jitters and as a result, the reduction of US Exports to China combined with higher tariffs and higher USD are combining to negatively impact earnings – as we have at the start of past recessions. Markets just don’t know it yet. 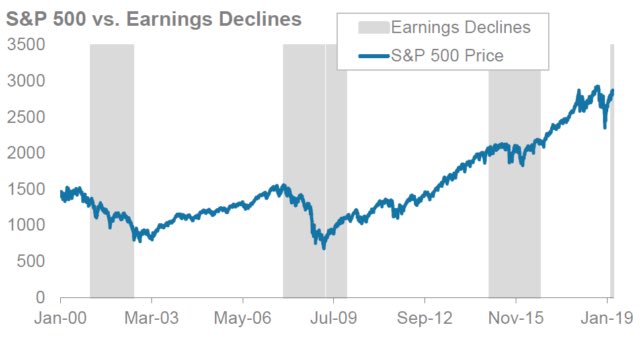 US High Yield default rates have been low despite soaring debt, thanks to a boost to corporate internal funds given by tax cuts. That’s waning now as profitability declines. Doesn’t bode well for HY. @GauravSaroliya 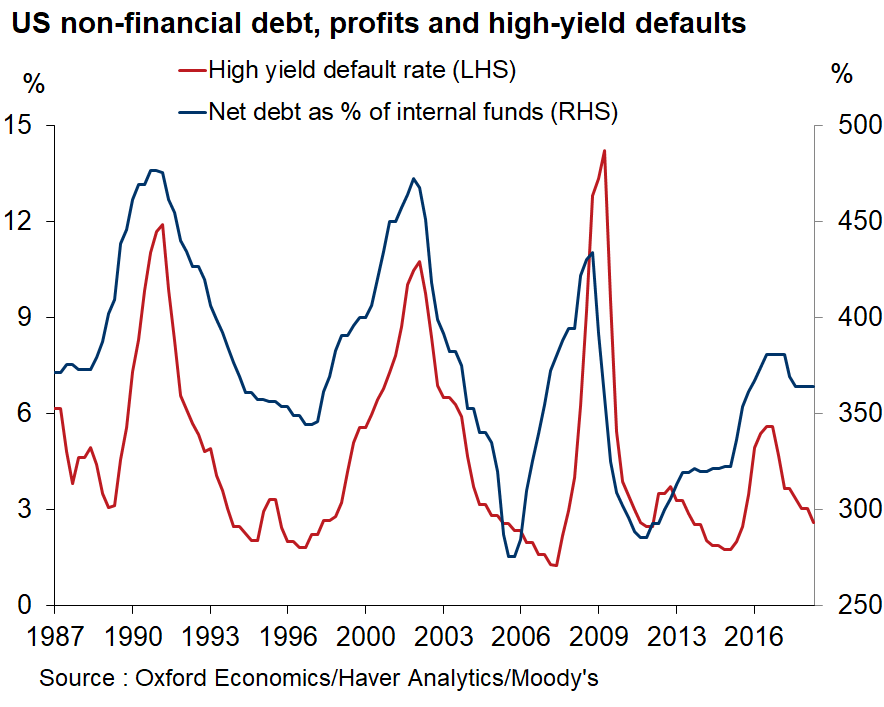 Stock Buybacks have slowed sharply in Q2 (165bn vs 223bn in Q1). Granted a lot of the large tech buybacks last year were larger because overseas cash was freed up from repatriation and corporate tax cuts – think CSCO QCOM ORCL INTC AAPL MSFT – but will the pace continue in the face of souring investment and political sentiment toward Stock Buybacks? 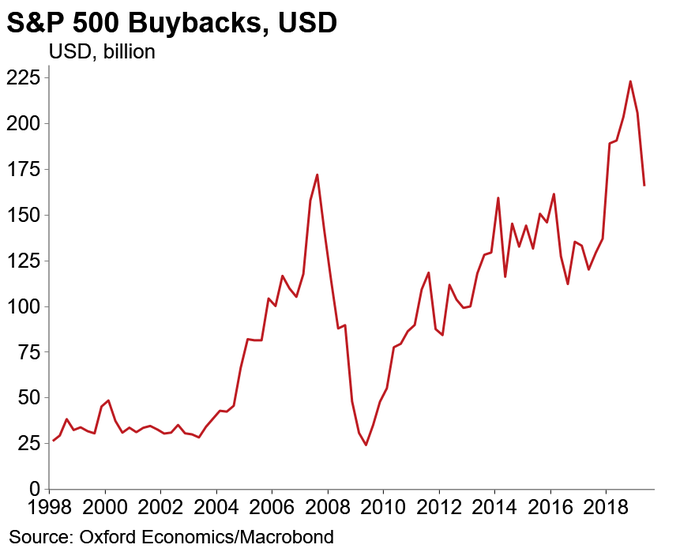 Monetary policy cannot address the structural competitiveness of US exporters. Fed cannot directly control the USD but tariffs have pushed the USD higher, hurting US competitiveness, where China has devalued its Yuan to support domestic producers.

The stabilization of China, as argued by @Trinhnomics, has come at a great costs to exporters as the Chinese have demanded fewer imports.

On top of that, a sharp decline in bond yields should not be a surprise in the context of a 40% reduction in core nominal growth.

Nominal Final Sales of GDP, or Core GDP, which strips out inventory and net exports, has decelerated much more sharply than consensus is seemingly willing to admit, falling from 6.1% in Q2 2018 to 3.6% in Q2 2019. EPB Macro Research 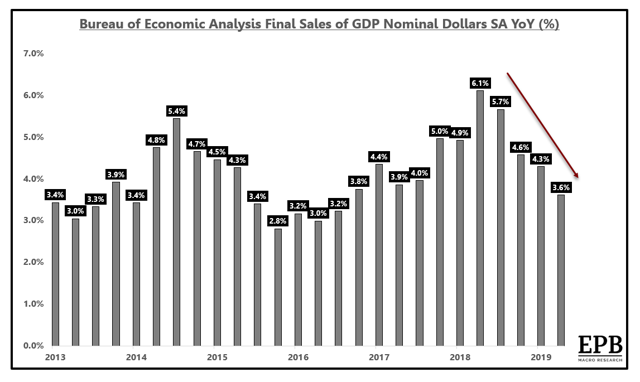 This indicator suggests the sharpest part of the slowdown may still be ahead.

This leading indicator, which is focused on various monetary aggregates, has a trough rate of growth in December 2019 before a small upturn in Q1 2020. @EPBResearch 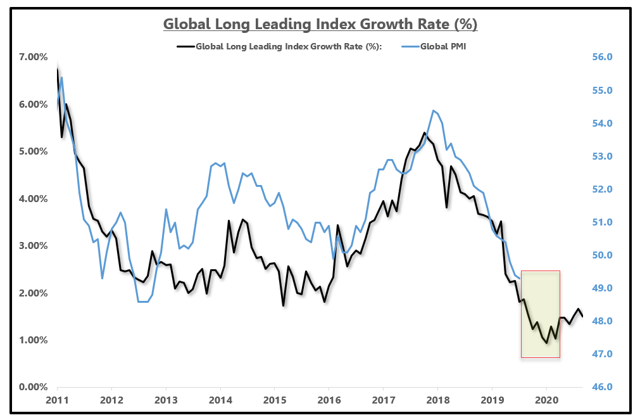 Recession Watch is firmly upon us: 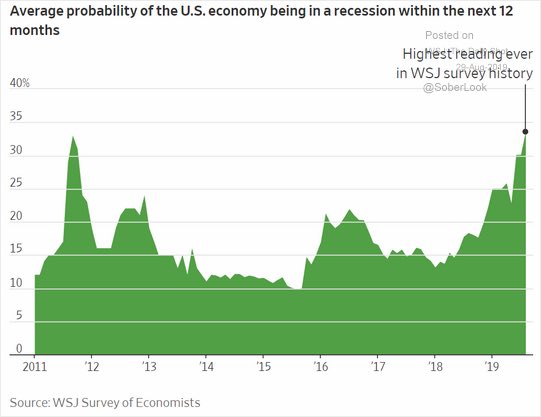 Now that the important part of the yield curves are inverted, making it less appealing for banks to lend, the expectation is that this will inevitably cause strain in capital markets and CAUSE a recession. 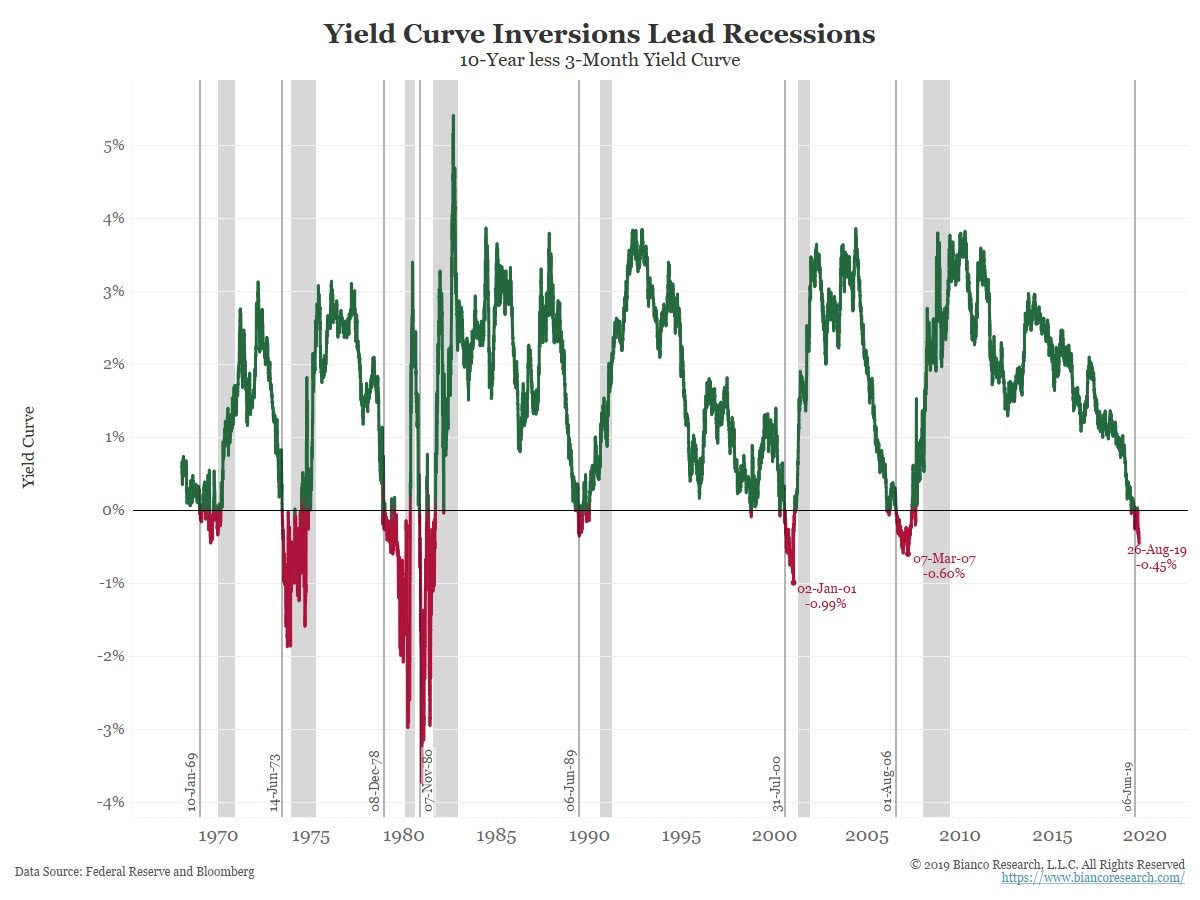 Add to that the slowing growth from the Leading Economic Index and it is no wonder inverted curves are convening at the same time as Manufacturing Recessions in US, Germany, Japan and South Korea.

July’s LEI reading revealed 5/10 LEI components are negative from the month prior, with the heavier weighted components mfg week hours, ISM new orders, and cons expec (~60%) combining -0.05 contribution to headline number. 8/13 top economies by gdp are currently contracting. PMI’s globally have been in a down trend since last year, with the US keeping the Global PMI above water.

Low interest rates have driven Private Equity investment in Unicorns – tech plays that are bets that they get to some scale where they’re entrenched and then get bought out. From IPO phenom BYND to high-risk speculator Softbank, we have reached a point where Unicorns are bad stocks as the fundamentals cannot keep up with the unrealistic prices.

“CFOs of these companies themselves admit that they cannot justify their market capitalizations… They conjecture that their market values might be […] a sum of best-case scenario payoffs.” Harvard Business Review

At some point, gravity should start to matter.

Case in point, Zoom is my Live Trading Room platform provider. I’m crazy about Zoom, but it is trading at 40x revenue. Companies that never traded at even 30x revenue include:

Needless to say, when price discovery takes hold again in markets, this irrational exuberance will not be supported. If/When the 10-yr yield starts to rise in earnest, this valuation  model will not support the risks of servicing Unicorn debt.

On the flip side – the downside more specifically – what happens if we break channel support and begin a waterfall of “negative convexity” in yields, which would be manifest by crashing yields that implies a massive deflationary shift. This is a really big risk right now because structurally, the more extreme the yield (lower), the more aggressive they buy (bonds), and this pushes yields lower still (deflation). Only growth and inflation can slow/reverse this dangerous trend. Too much of a push (lower) or hard-right turn (higher), and risk assets are repriced quickly. 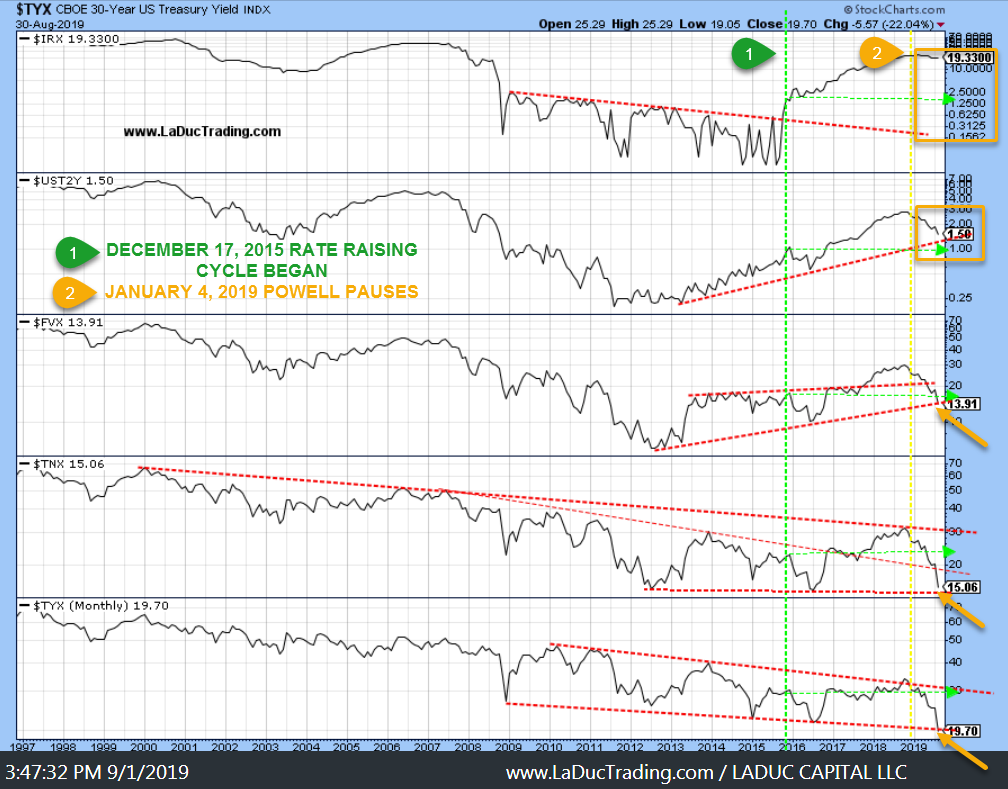 In thinking about this topic, it became clear that the Fed has a Big Job to actually raise inflation expectations or Trump’s Trade War with China is resolved. Since neither of those two scenarios seem plausible, then I’m going with the outlier plays: Fed signals it won’t cut and/or US Treasury comes in to perform a ‘USD Intervention’. And seriously, what are the chances?! Last, but certainly not least, Dems and GOP could come together very seriously to announce massive Fiscal policies.

Whatever the trigger, I am looking for either a bounce in rates to test my ‘chart-crime’ thesis below that a bounce, or maybe even a bottom, may be in for rates.

If not, I am looking for a convincing break of 1.5% 10-yr support that would validate the ‘lower for longer’ yield thesis as most of the world watches and worries.

I am not negating your thesis – as the Global Carry Trade is a freight train that needs miles + miles of track before it can even slow, let alone reverse, but…

What if… this chart crime I have committed against your 2 yr chart is but a breakout/retest before resuming higher? pic.twitter.com/DqRI92Pwr8

Negative Rates Actually Cut Lending, research shows, so expecting CBs to save us with this hog-wash is ridiculous.

Central banks’ negative interest rates were supposed to increase spending, stop deflation and stimulate the economy. They may have done the exact opposite. Bloomberg

The USD Makes The Weather

And its Rate of Change determines the severity ™

With that, here’s my $DXY chart I use as my roadmap. USD had a solid shot at dropping in Jan 2018 but since then it has been bid thanks in large part to Trump’s Trade War. I still see slow a grind higher to $100 (as Yuan fixes lower) + then Big Level/Risk of Higher to $105 on way to potentially $110. Clearly, this is not priced in to markets but it will be a consideration when/of Fed is ready to announce QE.

At $103, US tax receipts began falling at 3-5% annual rate in 2016. Such a drop in today’s environment would likely necessitate QE quite quickly, as fighting a trade war w falling tax receipts is challenging. @LukeGromen 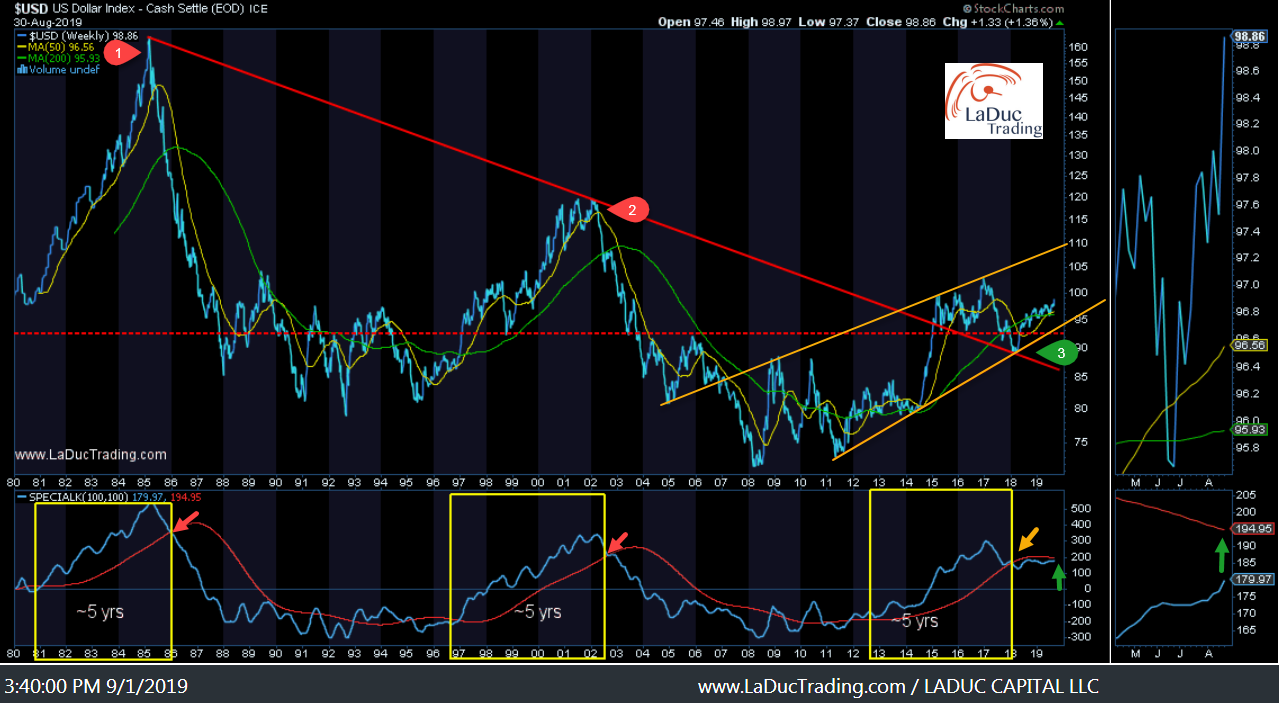 This is not your JP Morgan, politically-motivated, Trump-supporting market call to buy stocks at all-time-highs. This is UBS, the world’s biggest wealth manager telling clients to sell stocks, saying to ‘brace for higher volatility’ from the trade war.

On the surface, Trump and Xi keep the impression alive that both are dealing ‘in good faith’ for a trade war resolution.

The US-China trade war is “like two pokers players who both have bad hands,” says Nuveen’s Brian Nick. “But they suspect the other guy’s hand is worse, and he’ll eventually fold if we just keep re-raising.

But under the surface, indications are much more nuanced that China is escalating in every sense of the word and there is but one conclusion I can draw: Their landing, soft or hard, will be blamed on Trump’s trade war.

Xi isn’t all powerful. He’s still rising & tightening his grip. But IMO external pressure seems to be helping Xi rise to Mao-level status… As such, we could be in for a much longer-lasting Cold War than most experts are thinking. @FWIWmacro

We Have Reached Peak ‘Disposable Money’

Long, long time ago we used fiscal austerity as response to living outside our means and took on debt we planned to pay back. Now: throw-away capital (stock buybacks to engineer returns), throw-away budgets (endless government printing), and that mean even throw-away money (buy cat water- h/t @chigirl). This is the New-Not-Normal stage of our market that screams: Outliers Revert With Velocity ™ 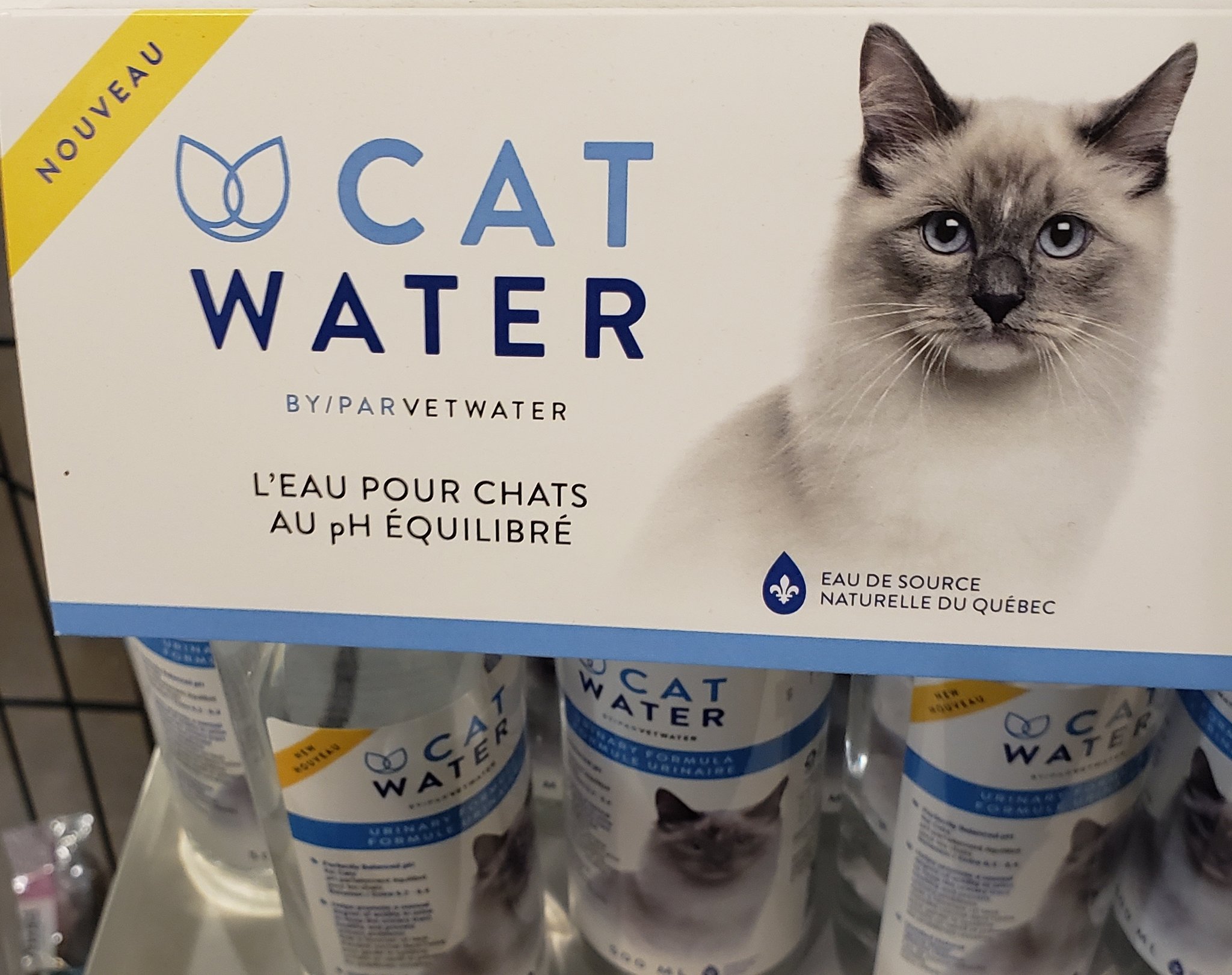 I began this post with the Bullish Thesis. I will end with the Bearish one: