As we awoke last Friday the 23rd of August to China imposing tariffs on $75B of US imports (right before Fed Chairman Powell stated at Jackson Hole that the Fed will do what it needs in order to sustain the expansion), I noted a sudden sell-off in the USD/JPY … JUST BEFORE Trump ordered US companies to relocate from China and stop doing business with them. That is one of the reasons I decided to press shorts intraday and said as such in my live trading room.

Trump went on to badger Powell in a nasty-gram of a tweet:

“Who is our bigger enemy, Jay Powell or Chairman Xi?” President Trump.

While he ended the day by pronouncing an increase in tariffs on China, he also went on to agree to a trade deal “in principle” with Japan Sunday during the G7 meetings. The critical $105 level in USD/JPY was in fact defended Sunday and since then markets, and Yen, have chopped sideways. And until this range breaks, we have little enthusiasm one way or the other.

Despite Yen and markets chopping sideways since last Friday, Yuan is much weaker and coincidentally Gold/Silver/Miners continue to get bid. In my DailyFX podcast, I gave my case for Gold June 6th. It is still in play for a whole host of reasons, but event risk is a big one. A strong Yuan devaluation, like we had in August 2105, is just one of them. This time the Yuan weakening is being fixed slowly versus all at once and in direct proportion to Trump’s Trade Tariffs.

I also went out on a limb back in early June to also say that I saw the Yen escaping BOJ control and heading higher – likely to hit ‘escape velocity” sometime before end of year: 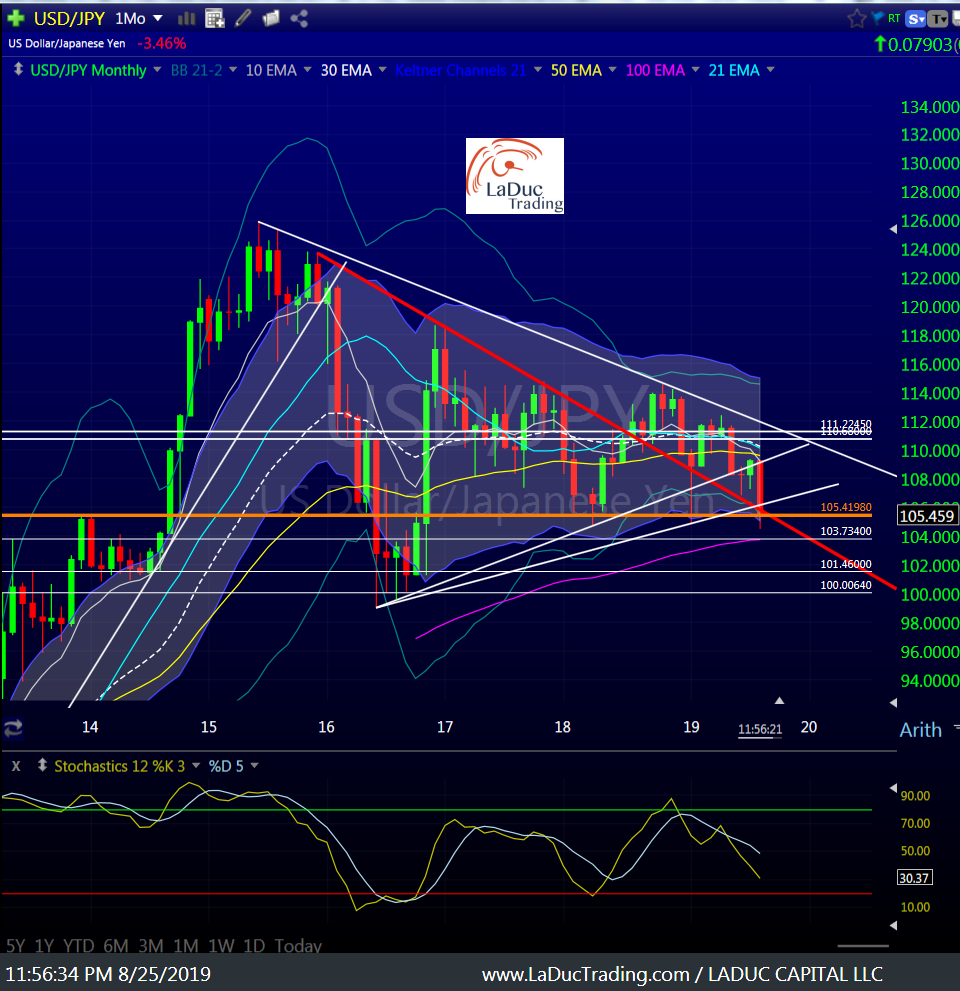 Here’s another look of what I mean by “Yen Nearing Escape Velocity”. This is the chart of FXY (Japanese Yen ETF) which I posted August 3rd to demonstrate the launch potential at ~$91, and as an effort to time Nikkei pullbacks (since it tracks inversely to JPY). Not much has changed in the past month and the Yen is still intonating bullish. 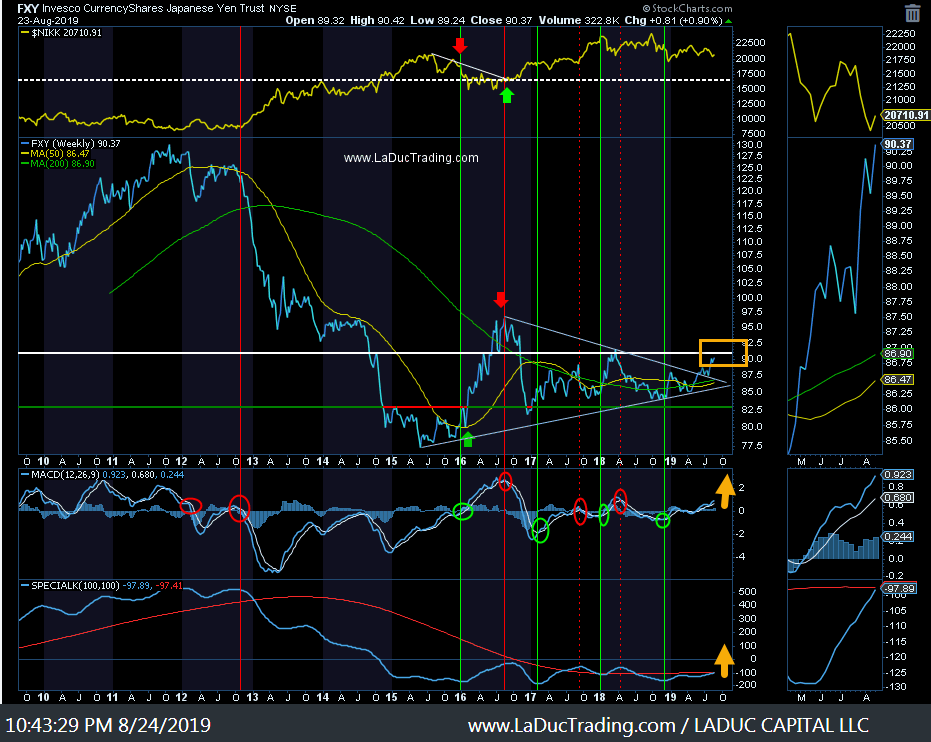 The Nikkei falling below it’s 200D around $20,000 (yellow circle), would trigger a further currency rotation into safety play Yen and support my thesis. A drop of USDJPY past $104.64 would likely trigger the market risk-off behavior for Nikkei and negatively impact US Equities. 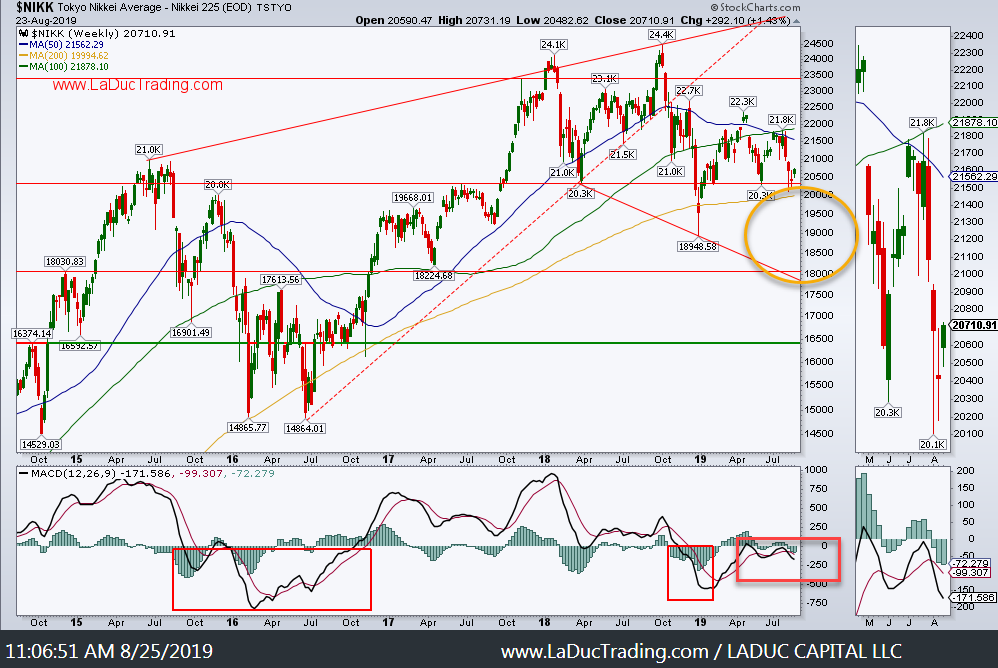 Here was an update last month of the USD/JPY as it broke down (Yen breaking up) right after Trump raised Tariffs post FOMC meeting July 31st. It has continued with the direction of the breakouts throughout August. 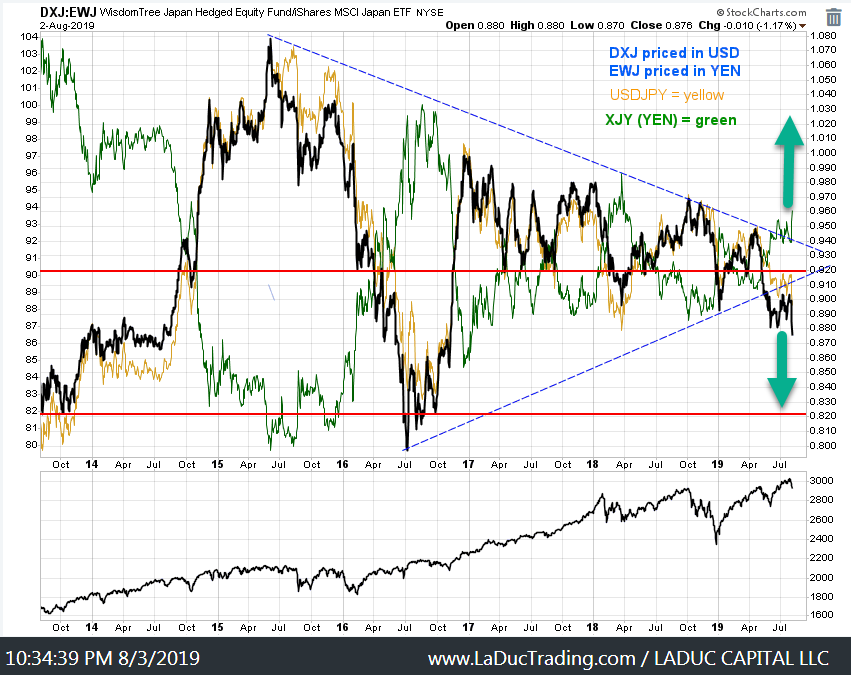 With Trade Wars escalating, I have stated I fully expected USD/CNH to trade higher, Yuan lower as China retaliates/balances to offset effect from increased US tariffs. But real fireworks happen when USD/JPY breaks lower (through $105) sending the *pegged* “Yen Into Escape Velocity Mode”. 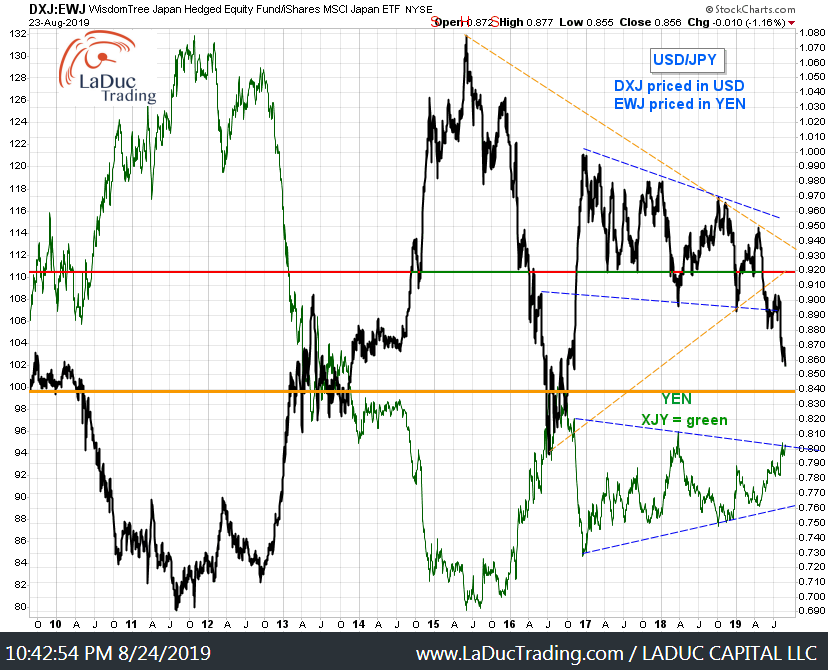 Here’s the Monthly chart of Gold and USD/JPY to show their relationship more closely. I included it in my Notes as part of my June 6 podcast for DailyFX and again updated for SeeItMarket  this August.

During the last 2 rate cut cycles, it paid to buy Gold and Silver after the first rate cut. See chart wherein the Fed cut nominal rates in late 2007 causing real interest rates (yields on 3-month Treasury bills less CPI inflation) to fall, which caused a strong run in Gold for first half of 2008 before strongly pulling back and then relaunching in 2009 for a multi-year run.

I believe Gold is following a similar playbook, and so too will the Yen. 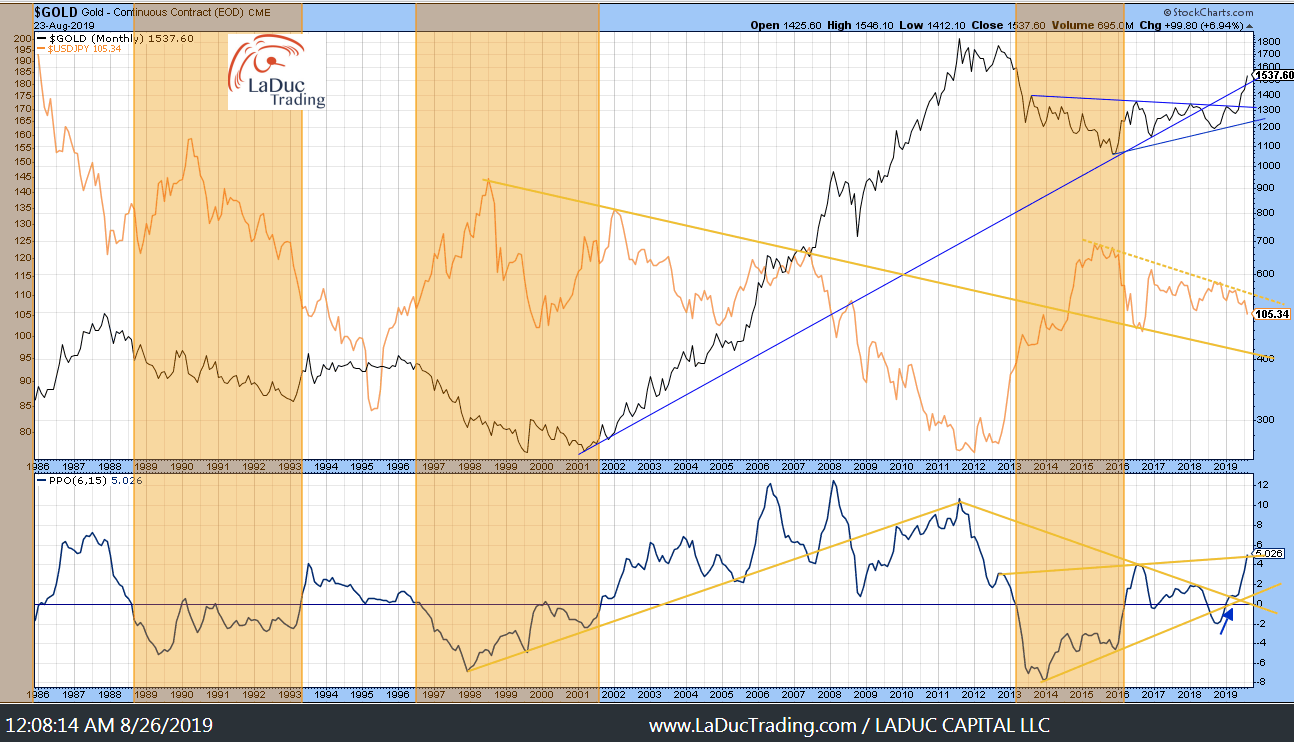 Let’s say we are in a currency war. American competitiveness is at the heart of Trump’s trade war with China, but Trump is losing the battle with the USD. Despite Trump deflecting blame on the Fed (tightening cycle, not cutting enough), it is Trump’s tariffs that have pushed up the USD and hurt US competitiveness. I would contend they have also contributed soundly to the US Manufacturing Recession. And by association, China stabilizing itself in light of the Trump Trade War has come at a great cost to exporters: less Chinese demand for imports. So all and all, Trump’s Trade Wars have caused intended and unintended consequences including but not limited to global economic slowdown, causing some countries to be on the brink of recession (Germany for one given its interdependence on both China and the US), and US likely in the coming year.

And neither the Trade War nor the appreciating USD is done. But for Trump to demand the Fed intervene in the dollar’s advance is fruitless and outside their control.

USD makes the weather and its rate of change determines its severity. Samantha LaDuc

The USD moving higher is defacto tightening – both for US consumers and companies but also for the 70% who hold DXY outside the US, especially those countries with USD-denominated debt. That is why traders know to be long USD is to be short Emerging Markets, Commodities and often Currencies. But Yen is defying that correlation and it may likely be bid (with Gold) because of the CNY.

And why does it matter?  Higher USD equates to contracted earnings and economic growth and raises demand for dollars, which spurs volatility and reprices assets.

In Japan, the bond market, along with industrial data and now labor figures, all suggest Japan is already approaching recession – like Germany – but markets just don’t know it yet. Despite this backdrop, there is an upcoming October sales tax taking effect in Japan. Will this push the other-wise quiet headlines in Japan into the forefront: “Japan Is Turning German”, as a turn-about-is-fair-play gesture on the references made to Western countries when threatened with stagflation and said to be “Turning Japanese”.

All of this recession and sales tax timing would be especially hard on Japan given Trump’s escalating Trade War with China, which has negatively affected Japanese/South Asian manufacturing already, not to mention the escalating strain from trade relations between Japan and South Korea. And all of it seems to contribute to the Yen being bid this year. 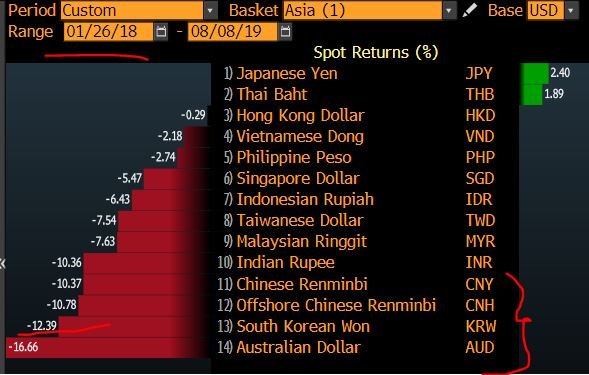 Add to those risks, China continues to devalue its Yuan which puts pressure on neighboring countries to compete by devaluing their currency in order to stay competitive. As the CNY rises (Yuan weakens), the Yen as well as the Dollar are stronger in comparison. Granted, few expect China to dump its largest reserve asset, but the intonation that it might has put a growing bid in safe-haven currencies of Yen and USD, whether the respective Japanese or US governments like it or not.

The real power of a weapon is the threat of using it – not actually using it. Let’s hope the Chinese don’t use any of their weapons, including their currency. And yet, there are other macro-risk factors to continue to bid up Yen as it nears potential Escape Velocity.