Last week, the market ‘got its’ cookie. (Promised Rate Cuts=Cookie)

Bloomberg:
Stocks broadly rallied Wednesday after the publication of Powell’s remarks before the House Financial Services Committed in which the Fed Chairman emphasized rising risks to the U.S. economy from trade policy and slowing global growth, as well as falling price inflation.  Powell noted that while the U.S. jobs market remains robust and consumer spending appears set to rebound, business investment has slowed considerably, along with housing investment and manufacturing output.
Powell said the Fed is prepared to “act as appropriate to sustain the expansion.”

This week, JIm Bianco from Bianco Research penned an article for Bloomberg Opinion – Federal Reserve Must Cut Interest Rates by Half a Percent – arguing that “Only a Half-Point Rate Cut From the Fed Will Do.”

By lowering its target for the federal funds rate by just a quarter point, the Fed risks no less than a recession.

But given how deeply the yield curve has inverted recently, a Fed rate cut of 25 basis points this month is not a guarantee that the yield curve will “un-invert.” It could possibly even stay inverted until the Fed’s September monetary policy meeting. If so, one would be hard pressed to find a period of five consecutive months of inversion that did not precede a recession.

In the meantime, yields have risen in July as rate traders anticipate only a 25 bp cut versus 50 bp. Bond yields have increased in almost every region in July. H/T The Market Ear 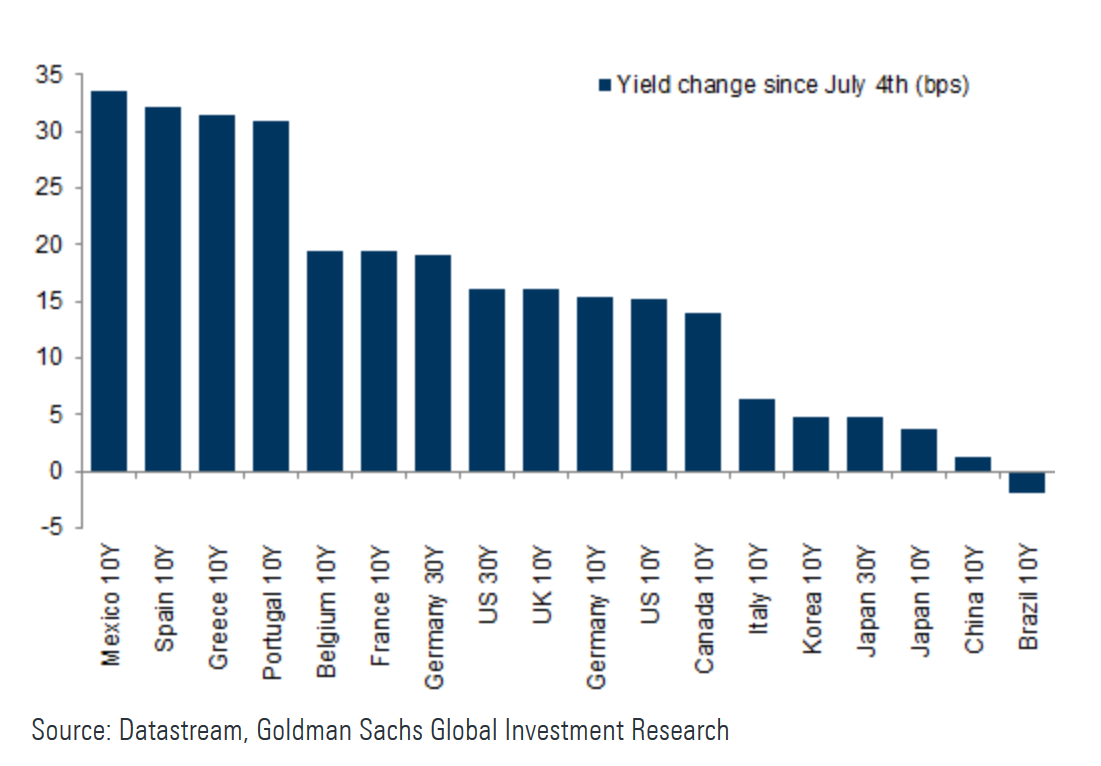 And I suspect this counter-trend rally in yields, and Bond pull-back, has a bit farther to go, leading up into the FOMC meeting July 31st anyway. 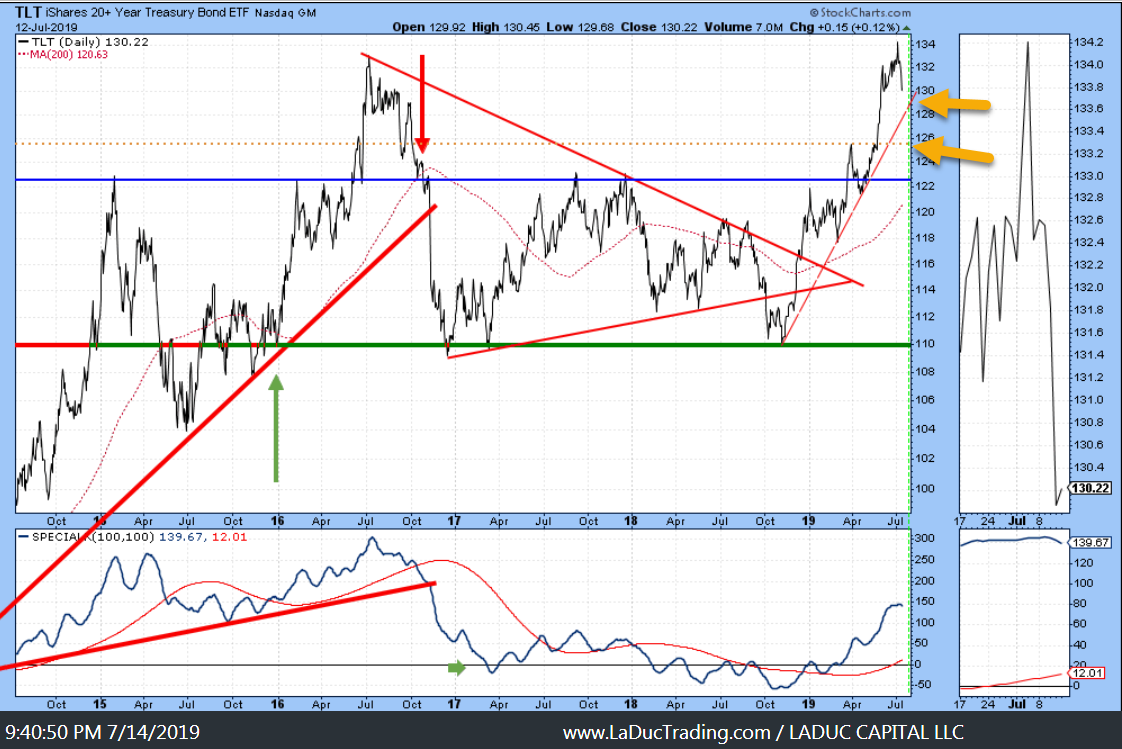 My price target of $SPX $3035-3050ish is likely tagged, just in time for Fed to disappoint right on cue. 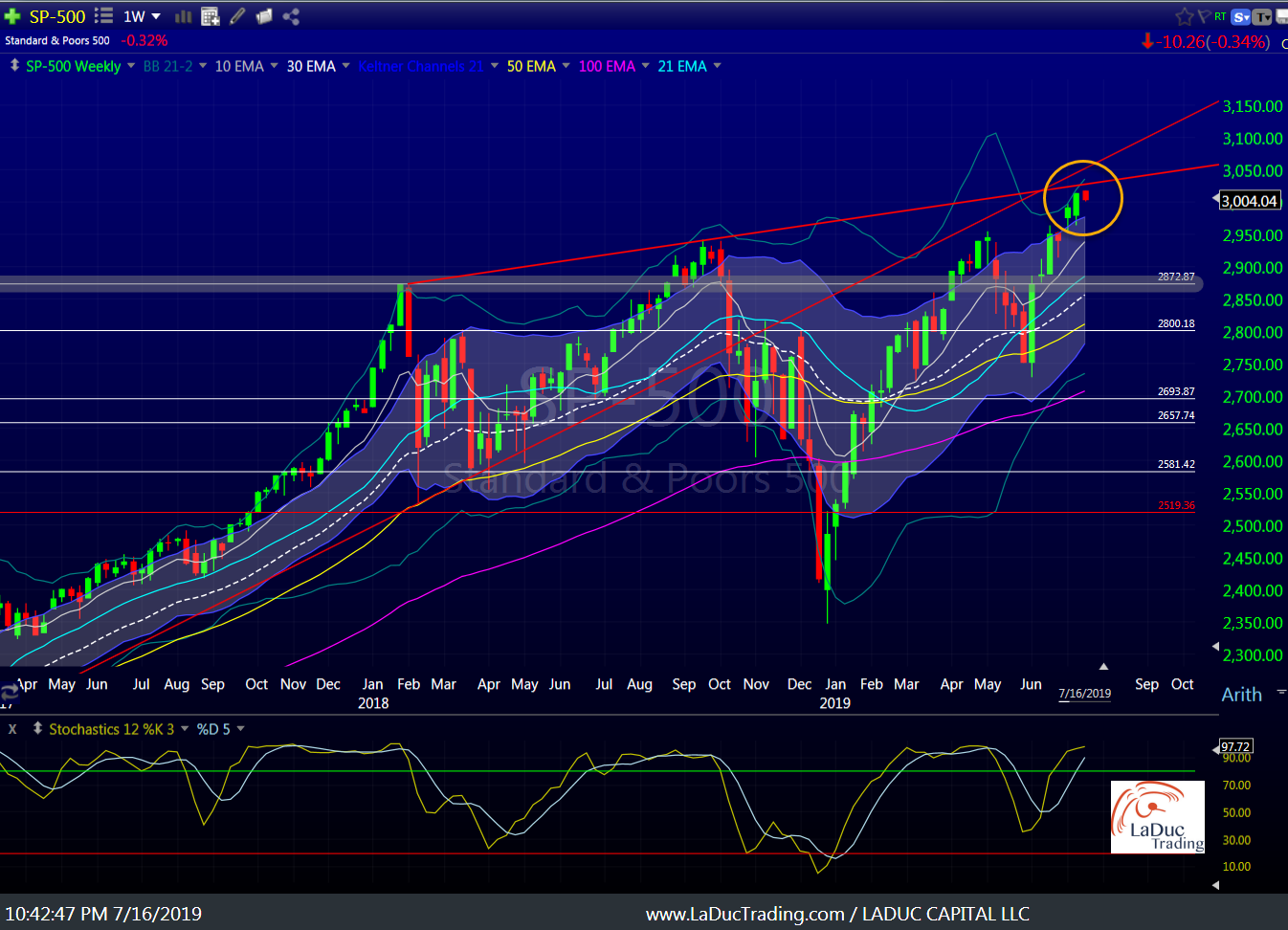 And by disappoint, I suspect Fed will only cut 25 bp for its first cut since 2008. Add to that the potential drama from the Debt Ceiling Showdown and you have two acts running on the same Main Stage. I suspect a pause in the rally occurs while the market digests the realities from:

And all of this against the backdrop of Mueller testifying July 26th and Congress having only 2-3 weeks to resolve the dreaded debt ceiling. 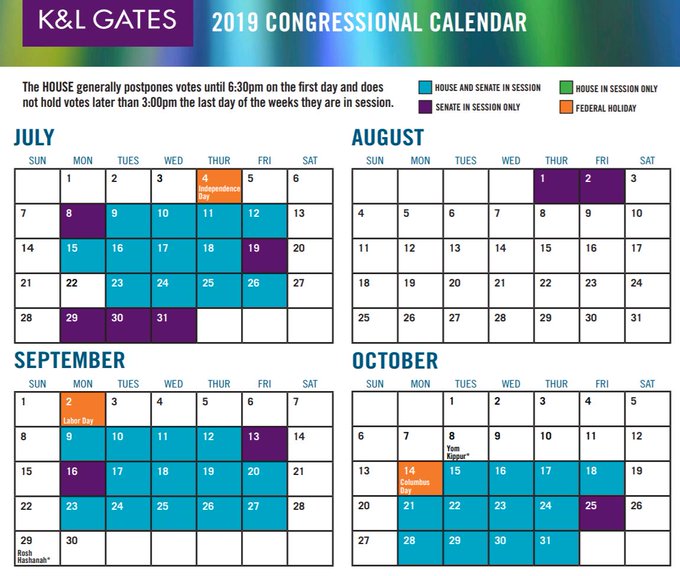 What happened to the slow “dog days of summer”?

For years, Fed officials talked about “normalizing” monetary policy but in a speech Tuesday, Powell lays out the reasons why there’s no going back to “normal” .

The speech walks through several areas in which the crisis changed policy making. Powell puts special attention on global factors

Another change: The “unconventional” tools used after 2008 will likely become conventional tools in a world of lower neutral rates, requiring central bankers to talk more plainly to the public about what they are doing and why. @NickTimiraos

Intervention that succeeds in driving the dollar down could drive interest rates higher as investors demand to be compensated for this exchange rate risk.  Rising interest rates could also encourage the liquidation of equities.

A plummeting dollar on the back of intervention could frustrate Trump’s campaign for lower interest rates. Marc Chandler

Wednesday we’ll get inflation data in the UK, Europe, and Canada. In the US it’s building permits, EIA data, and then the Beige booko in the run up to the EoM FOMC meeting. Otherwise, here are the releases today:

Sales at U.S. retailers rose solidly in June for the fourth month in a row, pointing to a strong rebound in consumer spending in the second quarter that suggests the economy is not as fragile as the Federal Reserve apparently believes. The increase was an even larger 0.7% if gasoline sales are stripped out. Falling oil prices caused a big drop in sales at gas stations. 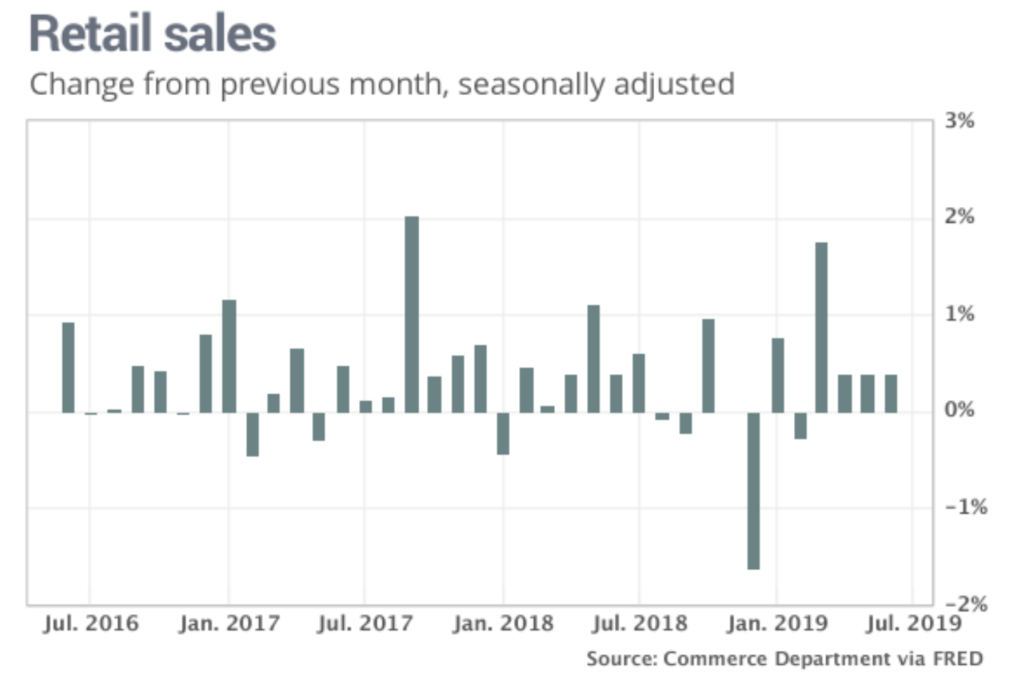 Import prices:  Prices fall in June by 0.9% on lower oil and food costs, the most in six months

The upshot: The U.S. is seeing little inflationary pressure at home or from abroad. 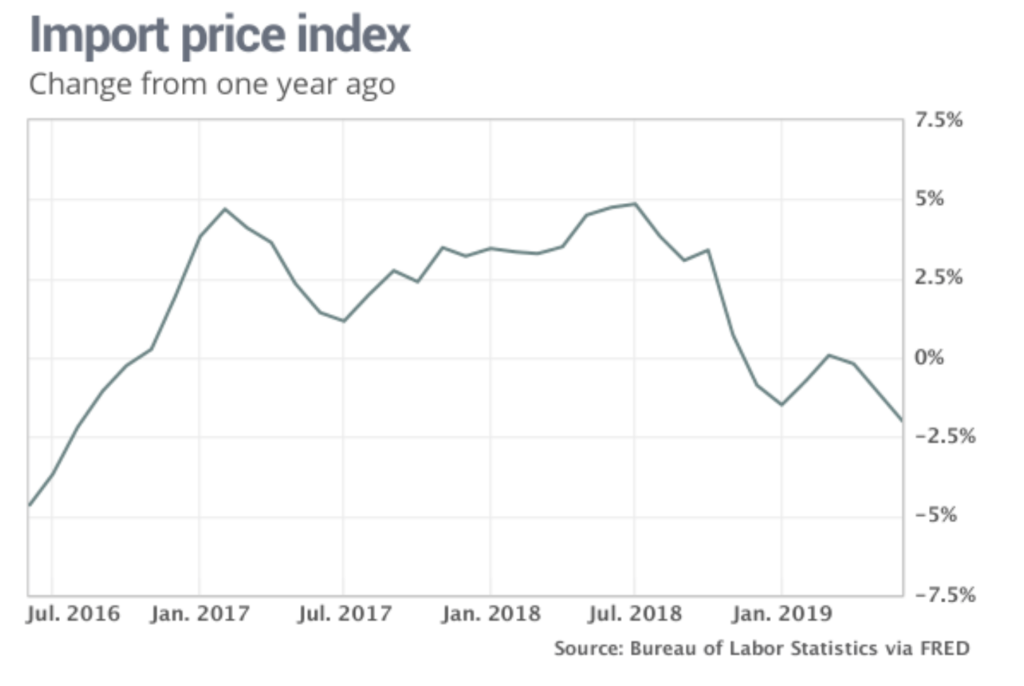 Industrial Production and Capacity Utilization: Production was flat in June, below expectations of a 0.1% gain. Capacity in use slipped to 77.9% in June from 78.1 in the prior month. 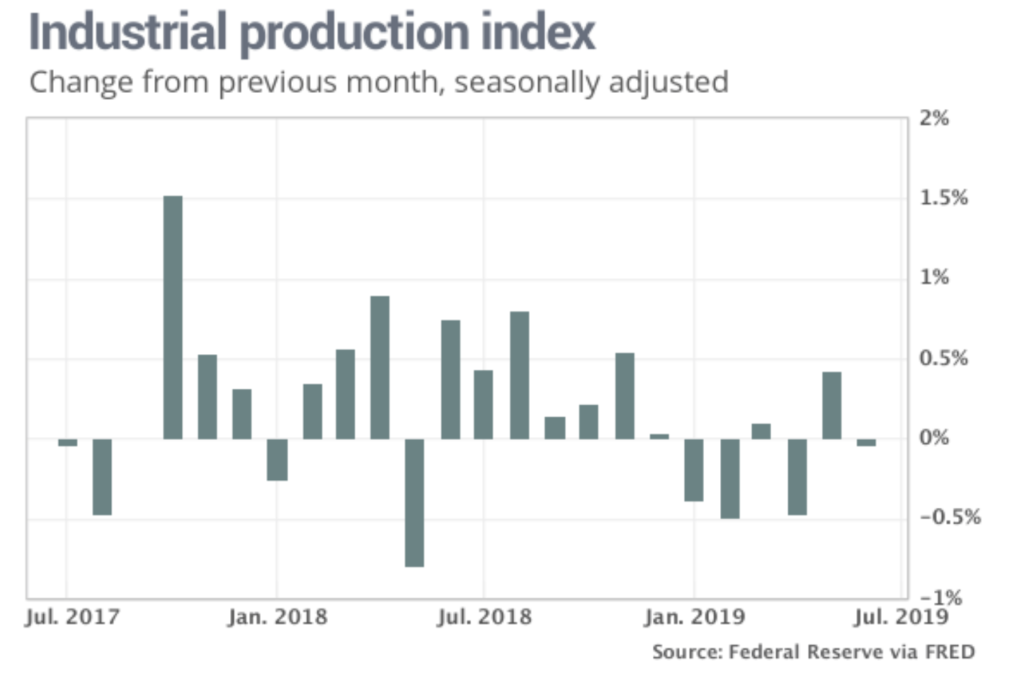 Home builder confidence rose one point to 65 in July, as measured by the National Association of Home Builders’ monthly index. That matched the consensus forecast among economists surveyed by Econoday. Any reading over 50 signals improvement.

In June, the gauge of current sales conditions and the one that tracks expectations for the next six months both rose one point, to 72 and 71, respectively. The tracker of buyer traffic was also up one point, but stuck below the neutral 50 line, at 48. 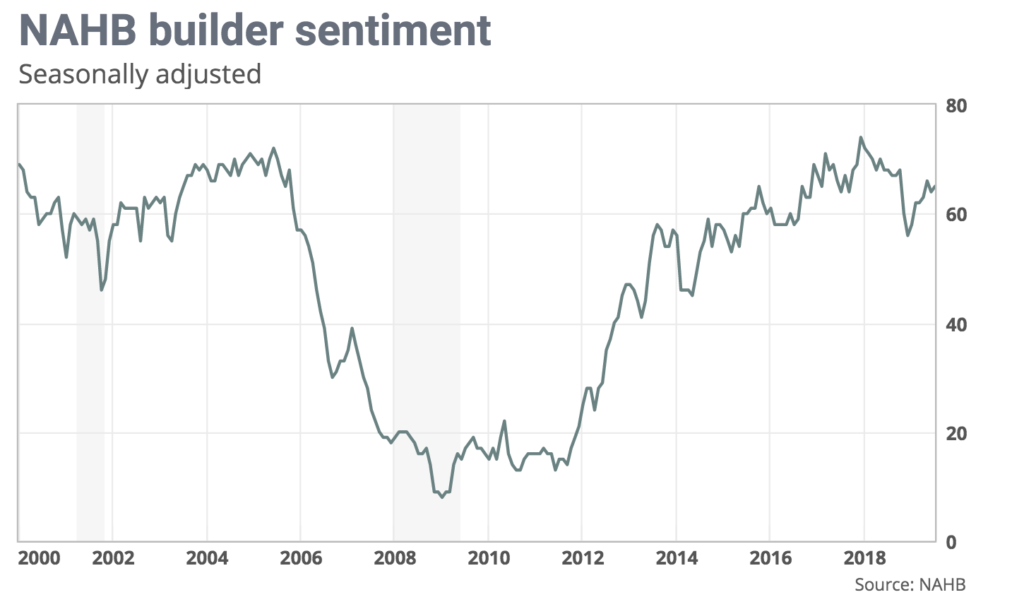 China on Tuesday rebuffed a suggestion from U.S. President Donald Trump that Beijing needs a trade deal with the United States because its economy is slowing, saying this was “totally misleading” and that both countries wanted an agreement. Trump, in a Monday tweet, seized on slowing economic growth in China as evidence that U.S. tariffs were having “a major effect” and warned that Washington could pile on more pressure.

Official data on Monday showed China’s economic growth cooled to 6.2% in the second quarter, the weakest annual pace in at least 27 years, amid trade pressure from the United States. In the first half, the economy grew 6.3 percent compared with a year earlier.

Trump Says He Could Impose More China Tariffs If He Wants

President Donald Trump reiterated that he could impose additional tariffs on Chinese imports if he wants, after promising to hold off on more duties in a trade-war truce he reached with China’s Xi Jinping last month. Trump and Xi called a tariff ceasefire and agreed to resume trade talks after meeting at the Group-of-20 summit in Japan, breaking a stalemate that began in May. The U.S. president said he’d hold off on a threat to impose tariffs on an additional $300 billion in Chinese imports, and that Xi had agreed to buy large amounts of U.S. farm goods in exchange. But those purchases have yet to happen.

U.S. banks are feeling the pain of a dovish Fed

After passing on higher interest rates to borrowers while keeping deposit rates low, investors have fretted how banks might handle fiscal easing. This week’s earnings are starting to give some clarity.

JPMorgan snapped a three-year streak of quarterly increases in net interest income—revenue from customers’ loan payments minus what the bank pays depositors—and said it will fall furtherin the second half of 2019. Wells Fargo posted its smallest lending income since 2016, while Citigroup’s net interest margin hit the lowest in five quarters. 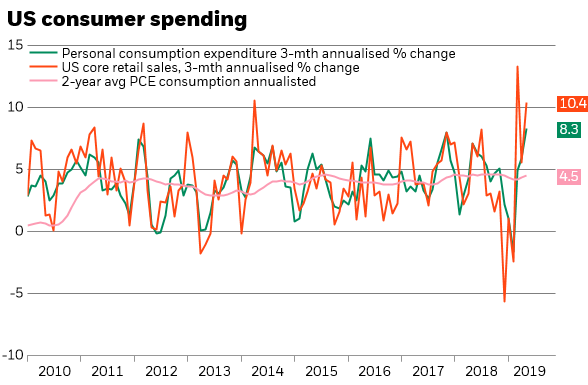 Sometimes swing trading, options especially, can be nerve wracking when you have intraday swings like we had today when Trump made comments that he could still impose additional China tariffs, if he so chose. I reminded folks in the StockTwits room that it’s the open and close that really matter when swing trading. Easier said than done, I know.

Some interesting thoughts in this Bloomberg piece: Rethinking Currency: Finding a Better Way to Run an Economy

Beyond the rhetoric over drug prices, pharma is working Washington to keep getting its way. Via @NicholasFlorko @levfacher