Market Thoughts: There’s A Lot Not Priced In

Fed – Much To Do About Nothing

Fed has spoken (with release of their minutes today) and they didn’t say much. I will say they were not as dovish as some had hoped – given Fed Funds future bet for two rate hikes this year. In the latest statement that covers their last April meeting, there was no mention of cutting rates or balance sheet adjustment – just of being patient. Again, I contend Powell has no desire to cut and would raise if he could! I also agree with this sentiment:

Investors Intelligence Poll is out and those in Neutral camp have started to take a stand:

Maybe they didn’t get these memos:

This morning after Pelosi said Trump was “covering-up” in regards to the Mueller case, Trump called an “impromptu” press conference defending his transparency and saying that Congress should pass his trade deal (the new NAFTA one) before doing an Infrastructure deal. So, the $2 trillion infrastructure deal folks got excited about 3 weeks ago is basically dead. Oh yeah, he also wants the Dems to drop the  cover-up investigation.

Democrats are faced with a complicated and risky choice: take on the White House in a lengthy court battle or begin an impeachment – Bloomberg

Time to start looking at US credit protection, CDX IG, once again as oil is not happy, and credit is full of oil risk….h/t @themarketear

Nearly 200 American footwear companies including Nike (NKE), Fila and Reebok have written to Trump, asking him to take shoes off the China list, saying it would be “catastrophic” for consumers and companies to be hit with the last traunch of tariffs on China imports at the 25% rate.  Also affected would be consumer goods such as clothing and accessories and the retail stores that sell them.

IF U.S.-CHINA DON’T AGREE TRADE DEAL AND U.S. IMPOSES 25% TARIFFS ON THE REMAINING $300 BILLION OF IMPORTS FROM CHINA, WE SEE THE GLOBAL ECONOMY HEADING TOWARDS RECESSION

And think about it: the additional tariffs would be AFTER already dismal retail results from Nordstrom, Kohls and Lowe’s of late.

In fact, Q1 Earnings are not as rosy as folks think when it comes to profits:

Profits grew just 0.71% in the first quarter based on the 92% of the S&P 500 members that have reported first-quarter results, a rate of increase that doesn’t even beat the current low rates of inflation, according to Bianco Research. “This means there is no ‘real’ growth, so it would be difficult to describe (first quarter) results as great.” Jim Bianco

It’s unlikely to get better anytime soon, with estimates calling for earnings growth of just 1.1% this quarter and 1.8% in the third quarter, before miraculously surging 8.1% in the final three months of the year… right before the US-China Trade War really heats up?

So, stocks might be able to avoid the earnings recession predicated by many at the start of the year, but there’s still a rising dollar to worry about.

US Dollar About To Break Higher?

The Fed’s Trade Weighted Real Broad Dollar Index is back to about its highest level since 2003 and global trade volumes are the lowest since the financial crisis.

A break, and we are probably into the next and most destructive phase of $ rally. @RaoulGMI 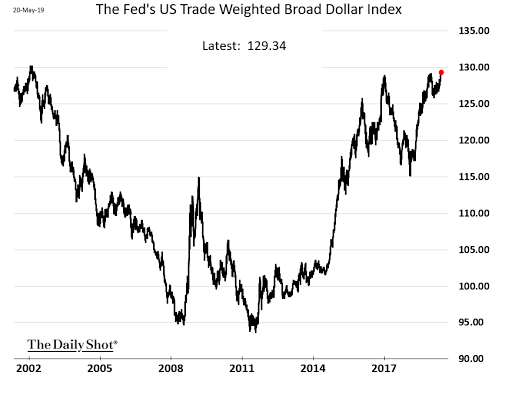 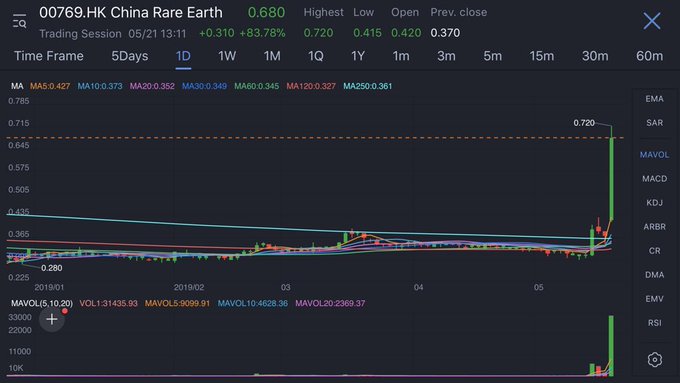 China Punches Up The Rhetoric

“On the new Long March, we must overcome various major risks and challenges from home and abroad” “We must be conscious of the long-term and complex nature of unfavorable factors at home and abroad and prepare for difficult situations @YuanTalks

Founder of Huawei…..Ren Zhengfei to Chinese media:” I’ve sacrificed myself and family for the sake of a goal that we will stand on top of the world. To achieve this goal, a conflict with the U.S. is inevitable.” via @GaoYuan86

Not only is Huawai way ahead of the 5G developers worldwide, they are also the #1 Tech company in China and #2 Smartphone maker in the world.

U.S. sectors most sensitive to China as judged by share of sales include Technology, naturally, as well as Autos and Consumer Products.:

US Dollar Matters to World Trade

Have a close look at the dotted red line in the first image: Bank Loans have fallen well below the fold (0 line).

Global value chain activity is reliant on financing for working capital, and fluctuates with financial conditions. Prevalence of dollar invoicing means that the dollar index is a useful concurrent indicator for trade activity: Shin of BIS 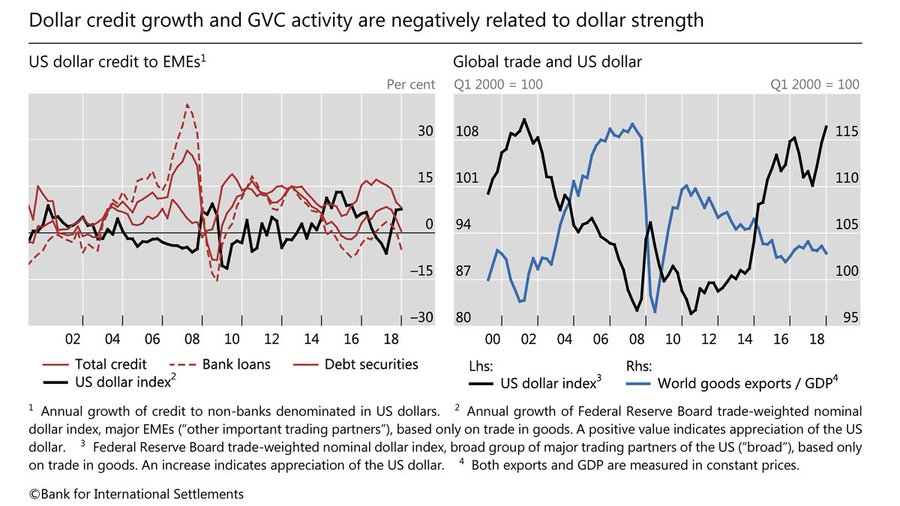 So Does A Weakening Yuan

Allowing the yuan to weaken beyond seven per dollar could mark a huge shift in the international terms of trade. Bloomberg 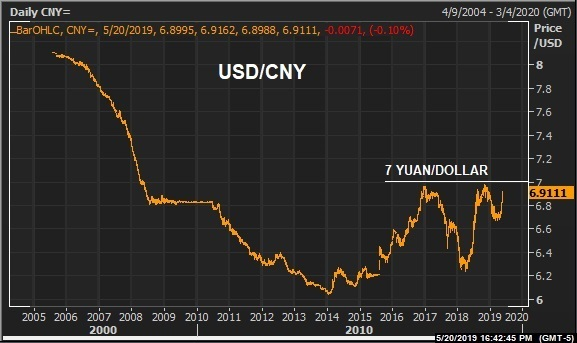 I’m going to summarize this as concisely as I can.

Color me skeptical.
There’s a lot not priced in.