Market Thoughts: The Race To The Bottom

Markets have no fear. Stocks are at all time highs and Volatility is at all time lows. ECB, BOJ and FED are all due to report their rate decisions in the next week. Draghi goes first. And judging from the price action you would think markets are pricing in QE, not just cuts. But that would be weird since ECB is planning to end its QE program all together in February of 2020; BOJ is pushing a sales tax (tightening) in September; and FED is telegraphing rate cuts despite Powell loathe to do so (and balance sheet run-off still in the background and Munchin removing liquidity once the new Debt Ceiling legislation has passed.) Weird. Weird. Weird.

Something else that occurred to me that is even weirder. Why ‘cut, ease, purchase’ anyway if we’re going to get a Trade Deal with China soon and all is made well in the world again? Weird cart before horse kinda look. I mean, negotiations by the U.S. are expected to restart with China early next week in time for the FOMC meeting decision after many weeks of not talking. Weird timing indeed.

Oh, and with about 20% of the S&P companies reporting, many are delivering earnings’ surprises. GDP is next on Friday. What if economic data isn’t as bad as predicted? Will FED still cut? Yup, they will, and if so, that’s just Weird.

The Race To The Bottom

In coordinated fashion, countries are cutting rates (as in “cutting nose to spite their face”). It is an odd behavior of treatment to the sickness but they seem not to mind the medicine they are prescribing to us. Why I find it particularly odd is the fact that the yield differentials, globally, will only continue to drop together, so there is NO advantage or incentivizing of behavior to rotate money back from the US (higher yielding assets) to the original country of origin. I mean, the same “debt binge on ‘free money'” is perpetrated with the same outcome: to invest in – you guessed it – US equities and Treasuries! So the foreign-currency carry trade freight train continues on.

@Mohamed El-Erian wrote in detail about this conundrum. Here’s but a snippet:

All Fed Heads face the same dilemma: to refuse to print the money necessary to finance deficits is to risk causing a sharp rise in interest rates as these governments would need to find sources from which to borrow money. And would nations cooperate or cheat?

In the short run, the game defines the players. But in the long run, the players clearly define the game.

And since no Political or Monetary leader wants to deal with the structural changes needed, Fed heads everywhere keep printing. The result of not printing money is Unemployment. And Unemployment incites all kinds of nasty consequences that lead to crashing consumer and business confidence which eventually sparks domestic, economic & political crisis – in domino fashion. But in all of history, when has the Rate To The Bottom brought about sustainable prosperity?

SNAP Beat 😉 And here are the two posts I wrote on it a few wks ago for clients. I highlighted 5 option ideas on how to play – all big winners!

As for those gains in $SNAP (which I don’t believe are done), here are the tactics/results, if held through EPS:

Wow. Last night I discussed IWM, the moving average convergences and the fact that it closed outside of that falling wedge pattern.  I had taken a couple of September calls at close yesterday (easy for me to say now since it went my way. Ha!), but was not expecting the big move today – especially considering the weak start to the day. Needless to say, it moved and closed over that upper trendline on good volume. However, it’s quite extended on the hourly and I would expect it may need some time to digest this move. I took off my calls at EOD for a 69% gain. 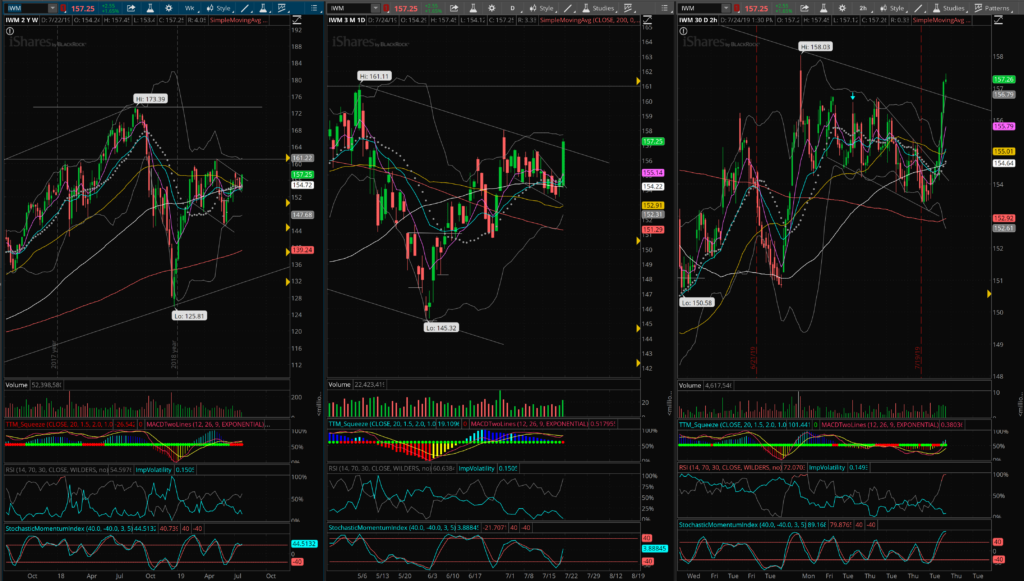 U.S. manufacturers expanded in July at the slowest pace in almost 10 years, but the economy is still keeping its head above water due to faster growth in the much larger service sector in which most Americans are employed.

IHS Markit said its manufacturing PMI slid to 50 this month from 50.6 in June, marking the lowest level since September 2009 just as the current expansion was getting underway. An index number of 50 is the cutoff point between whether companies are growing or shrinking.

Yet similar survey of the much larger service side of the U.S. economy — retail, health care, software, tourism and the like — rose to a three-month high of 52.2 from 51.5 in June. Some 80% of Americans work in the service sector.

New-home sales rebounded in June, the first gain in three months, government data released Wednesday show. The annual sales pace for new single-family homes in the U.S. rose 7% last month to 646,000, led by a big gain in sales in the West, the Commerce Department said.

New-home sales were rising steadily but peaked at 693,000 in March. Sales remain 4.5% higher than a year ago in June. Over the past year, sales have been strong in the South and West and weaker in the Northeast and South. In the year-to-date, sales are 2.2% higher than the same period a year ago.

Johnson, who has been hailed by U.S. President Donald Trump as Britain’s Trump, is sending the strongest message yet to the EU that he will be taking a distinctly tougher approach to negotiating a revision of the Brexit divorce deal.

He took over from Theresa May at one of the most perilous junctures in post-World War Two British history – the United Kingdom is divided over Brexit and weakened by the three-year political crisis that has gripped it since a 2016 referendum vote to leave the bloc.

The Chinese government has given the go-ahead for five companies to buy up to 3 million tons of U.S. soybeans free of retaliatory import tariffs as trade negotiations between the two nations continue, according to people familiar with the situation.

The retaliatory tariff-free quota for 2 million to 3 million tons will be part of a goodwill gesture toward the U.S., and there could be a second round of exemptions depending on how the trade talks progress, two of the people said, declining to be identified as the information is private.

The U.S. Justice Department sent the strongest signal yet that it’s prepared to take on technology giants like Facebook and Google, announcing a broad antitrust review into whether the companies are using their power to thwart competition.

The department’s antitrust division disclosed plans Tuesday to scrutinize tech platforms following mounting criticism across Washington that the companies have become too big and too powerful. The department didn’t specify which firms it would look at but strongly suggested Facebook Inc., Alphabet Inc.’s Google and Amazon.com Inc. are in the cross-hairs.

From @WallStreetJane:  This guy. Rotten to the core and still, somehow, deludes himself that he deserves leniency.: Bernie Madoff Asks Trump to Reduce His 150-Year Prison Sentence