I added no Volatility into the G20 event. I expected ‘optics’ not specifics. There was talk of compromise, some would say can-kicking: Trump said he would hold off imposing tariffs on an another $300 billion of Chinese goods (versus the earlier threat of levying them if Xi didn’t meet), and, much to the chagrin of his GOP and Dem ‘team-mates’, he agreed to delay restrictions on Huawei Technologies Co. That was enough to cause Futures to gap higher so our Monday morning, 1st day of July and start of the second half of the year, would be unchase-able. (But it was fade-able intraday! Copper’s Hard Reversal was the Tell and about the same time, 18 minutes in, we had 1,059 stocks up from the open  vs 2,107 that were down from the open (H/T @ZorTrades). More in ‘Samantha Says’ below.)

“I had a great meeting with President Xi of China yesterday, far better than expected. I agreed not to increase the already existing Tariffs that we charge China while we continue to negotiate. China has agreed that, during the negotiation, they will begin purchasing large…..

….amounts of agricultural product from our great Farmers. At the request of our High Tech companies, and President Xi, I agreed to allow Chinese company Huawei to buy product from them which will not impact our National Security. Importantly, we have opened up negotiations…

….again with China as our relationship with them continues to be a very good one. The quality of the transaction is far more important to me than speed. I am in no hurry, but things look very good! There will be no reduction in the Tariffs currently being charged to China”

A Chinese Advisor also weighed in that a final U.S.-China trade deal was no more likely

A trade truce with the U.S. reached over the weekend makes a final trade deal no more likely, according to Zhu Ning, a Chinese academic who advises the Chinese government and central bank. He likens the dispute to conflicts in Korea or Vietnam. “It could drag on and there could be no declaration of war but the skirmishes keep going,” he said on the sidelines of the World Economic Forum in Dalian on Monday

Here were the economic releases from just this morning. Globally, fundamentals are deteriorating rapidly:

ISM New Orders shows the entirety of the Trump bump has been unwound and in danger of breaking lower as the 10-yr business cycle shows fatigue.. Chart H/T @RaoulGMI 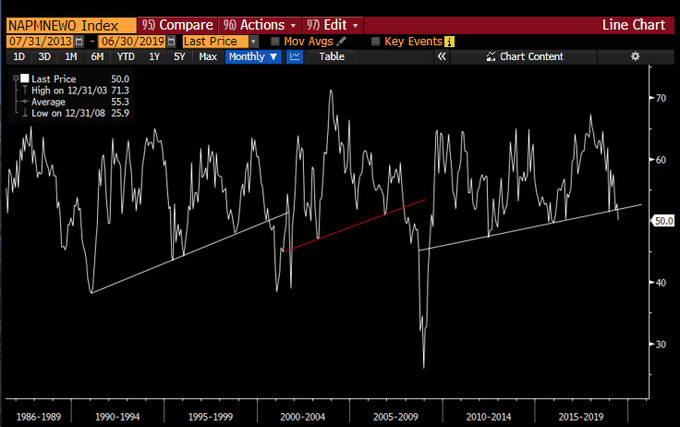 Fundamentals are diverging greatly from sentiment-driven prices. I understand the bullish case of “less dirty shirt” and “easy money” for US equities triggered by Trade Truce talks BUT I also see risk of impending #AirPocket that is coming back into view. (Referring to my Stock-Bond-Volatility Ratio and Forex Volatility analysis presented to clients.)

I refer to this potential AirPocket as “Stall Speed“:

So what might Trump do before FOMC end of month to try and get Velocity beneath the wings and ‘angle of attack’ for extra (stock market) lift? He will no doubt push for his rate cut and threaten Tariffs again!

And with Global Manufacturing PMIs continuing to contract meaningfully (think less air speed which is needed to keep us in flight), Tariffs (Trump) and Powell (Rate Cuts) are the stall speed risk. So it begs the question: Do you trust the pilots flying to avert disaster if we stall?

U.S. manufacturers grew in June at the slowest pace in more than two years, hurt by trade tensions with China and Mexico and weak exports, a survey of executives found. The Institute for Supply Management said its manufacturing index slipped to 51.7% in June from 52.1% in the prior month. 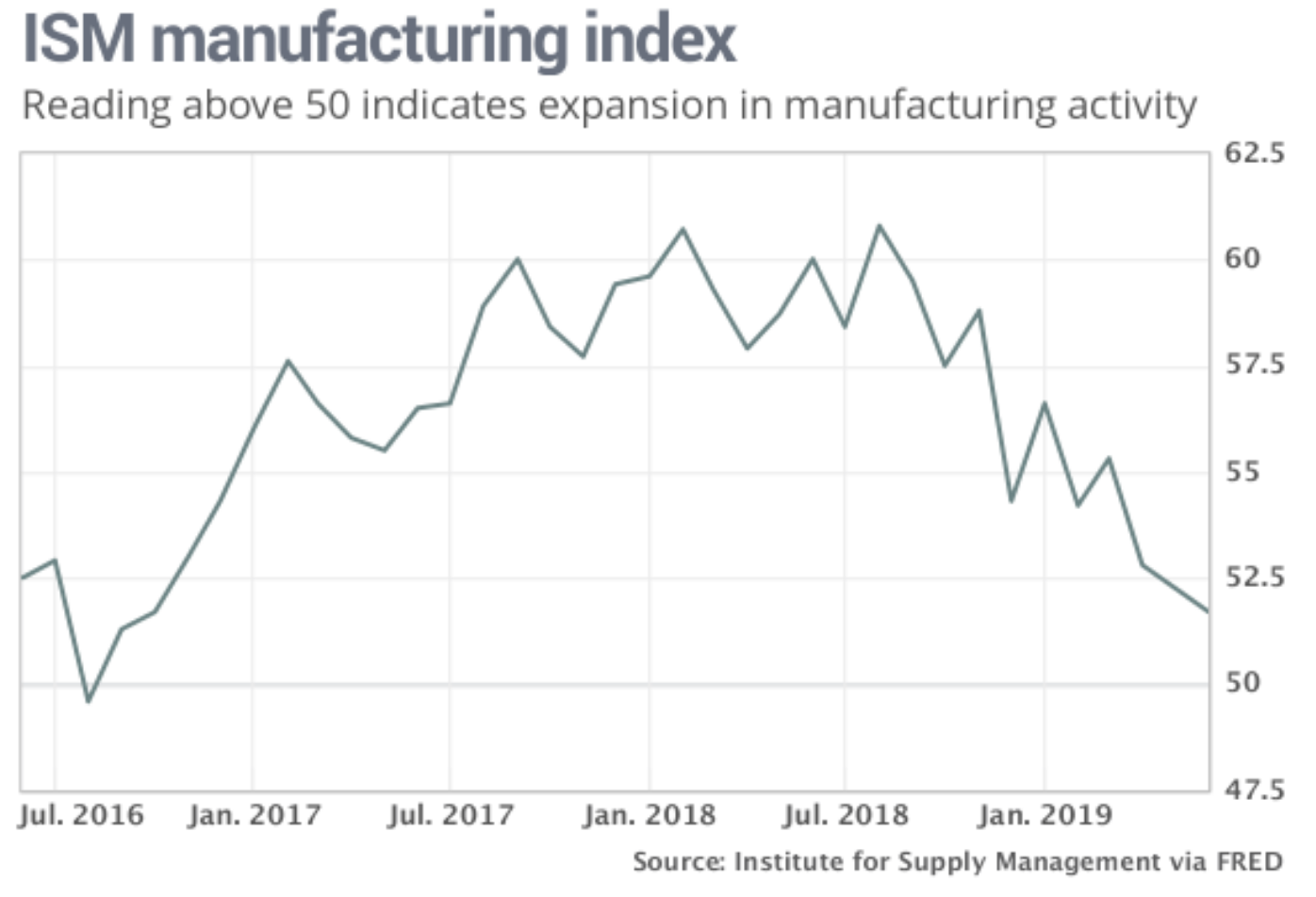 Construction Spending for May

Outlays for U.S. construction projects fell 0.8% in May at a seasonally adjusted annual rate of $1.3 trillion, the Commerce Department reported Monday. That’s the biggest drop since November. Economists polled by MarketWatch had expected growth of 0.3%. Spending in April was revised higher to a 0.4% gain from the prior estimate of a flat reading. Residential construction, which has been weak, fell 0.6% in May. Spending on public construction projects dropped 0.9% in the month.

Protesters occupied and ransacked Hong Kong’s legislative chamber on Monday in a dramatic escalation of demonstrations against the city’s China-appointed government, prompting police to fire tear gas to clear the area.

Iran announced on Monday it had amassed more low-enriched uranium than permitted under its 2015 deal with major powers, its first major step beyond the terms the deal since the United States pulled out of it more than a year ago.

Iranian Foreign Minister Mohammad Javad Zarif, who announced the move, said it nevertheless did not amount to a violation of the accord, arguing that Iran was exercising its right to respond to the U.S. walkout.

The step, however, could have far-reaching consequences for diplomacy at a time when European countries are trying to pull the United States and Iran back from the brink of war. It comes less than two weeks after U.S. President Donald Trump ordered air strikes on Iran, only to cancel them minutes before impact.

It remains the mystery at the heart of Boeing Co.’s 737 Max crisis: how a company renowned for meticulous design made seemingly basic software mistakes leading to a pair of deadly crashes. Longtime Boeing engineers say the effort was complicated by a push to outsource work to lower-paid contractors.

The Max software — plagued by issues that could keep the planes grounded months longer after U.S. regulators this week revealed a new flaw — was developed at a time Boeing was laying off experienced engineers and pressing suppliers to cut costs.

Increasingly, the iconic American planemaker and its subcontractors have relied on temporary workers making as little as $9 an hour to develop and test software, often from countries lacking a deep background in aerospace — notably India.

More of a who would have thought about: Is Reheated Pasta Less Fattening?

As a follow up to the Bloomberg Feature posted last week, Reuters Investigates explores: How judges added to the grim toll of opioids

I’ve said it before, but being honest about your trading and results is one of the toughest things to face – let alone share it with others. There are some fantastically honest traders on social media, but they are few are far between compared to the guys that have made millions and are driving lambos. Ha.

In the interest of maintaining honesty for the StockTwits Premium members I just have to force myself to put it out there. I also want them to know I am thinking about what I did wrong, what bad habits are creeping back in to the game, and what I should do to take a step back and preserve my capital in times of sub par performance.