Market Thoughts: Oil About To Get Busy?

Stocks faded hard into the close Friday, along with Gold and Silver. This was the worst week since end of May. So what changed?

Most point to the market discounting that the Fed might not be dovish enough – cutting by only 25 bps versus 50 bps. Market had ‘priced in’ with ‘100% assurance’ at least a 25 bp cut (maybe even more). What set off market buying Thursday after Fed Doves Williams and Clarida spoke of favoring aggressive Fed policies, was talked back after the close Thursday night. The Williams (and Clarida) speeches that spurred stocks on Thursday to rally on potential for aggressive rate cuts also caused USD to dump. At the same time, three countries cut interest rates Thursday–South Korea, Indonesia, and South Africa.

Talking it back…
Talking it way back I’m betting.

And Friday, markets were weak and Gold and Silver gapped down as the USD reversed it’s Thursday losses.

But the better explanation for why markets continued to sell off Friday afternoon can be attributed to another unknown.

While markets digested and debated “to cut or not to cut”, news on Debt Ceiling hit around 1PM ET which really helped push markets over and down:

With that, Trump was reported to say around 1:00PM ET that he would never use the debt ceiling to negotiate:

“That’s a very very sacred thing in our country. The debt ceiling. We would never play with it.”

And as markets know, time is running out to seal a deal with the House expected to leave for summer break on JULY 26TH.

It pays to have me watch and trade the news for you.

Not only did I finish my First Week with my newly launched Brokerage-Triggered Trade Alerts +19% + 12.3% in Realized PnL in Chase and Swing Portfolios, but I alerted members to a Gold and Silver short setting up Thursday when euphoria was at its loudest:

Clients can use my analysis for Trend trades, Swing trades but those who are in my live trading room or trade alert members can also have fun with the Chases. And we had nice chases Friday short in $GLD $SLV:

Oil Long for a Trade

In my trading rooms, I discussed how Crude is on support: ~$55.55 trend-line support at the same time XLE is trying to stabilize at $62 support. Then news broke of Iran seizing a U.K. shipping vessel. I just looked: Tensions soar after Iran seizes tanker

I I am long Oil over the weekend, but this is a trade, not a position. 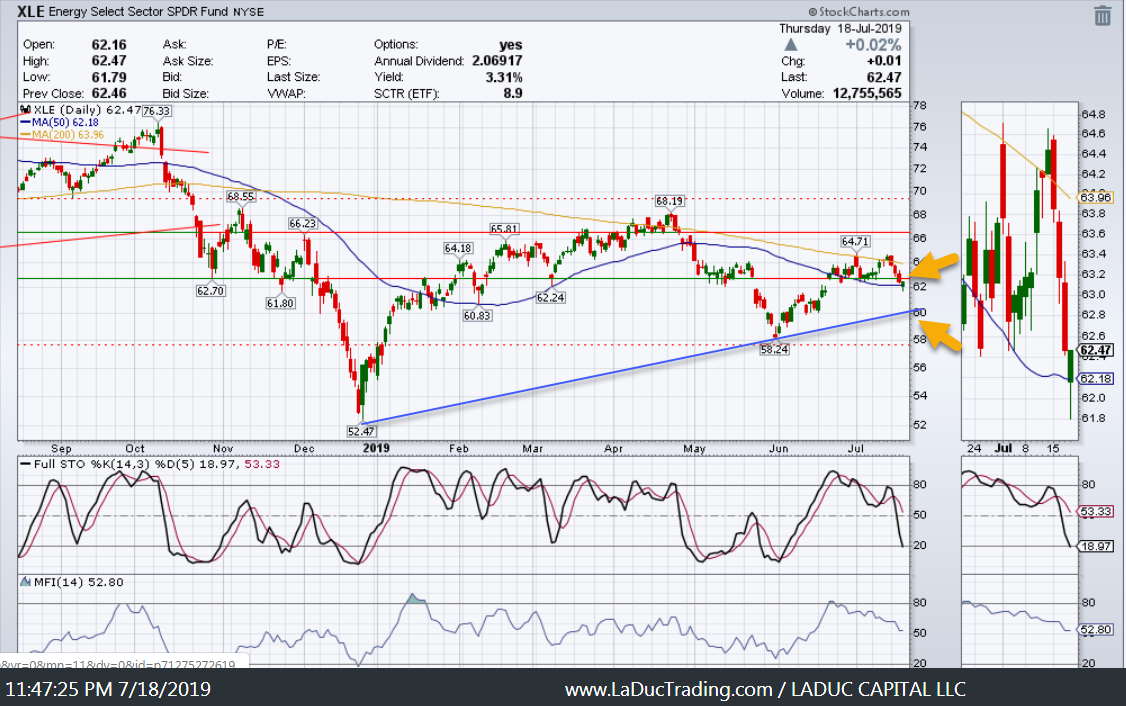 A month ago I posted this chart on Crude and it is still my big picture road map: 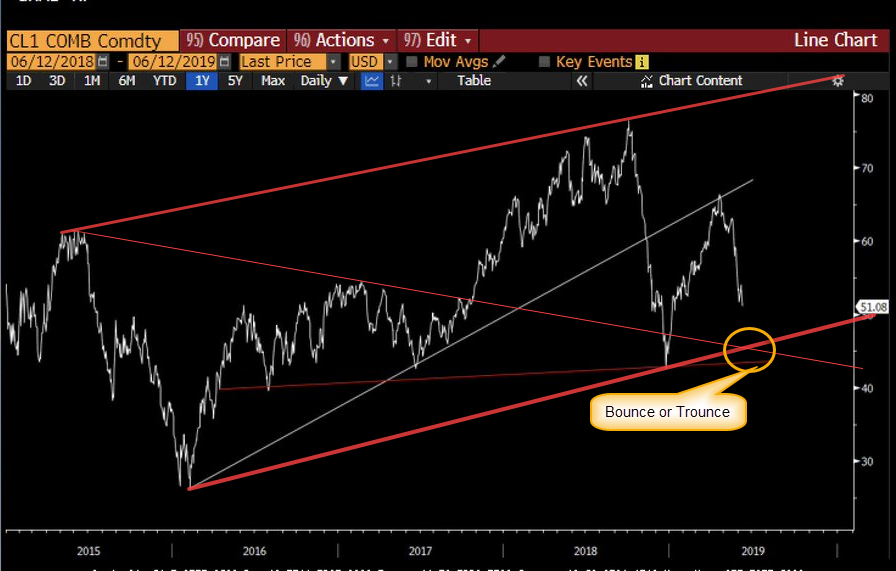 And since we’re on the subject of Oil, I thought I would throw in this correlation analysis just for “fun”:

While Trump is talking Oil prices down, keep in mind another correlation analysis to keep in the back of your mind just in case he stops talking and starts attacking:

“Since 1970, the US has never experienced a recession without oil prices first doubling. Could we see oil prices increase by 100% in the next year? Sure, but it will take a dramatic escalation of Middle East tensions to do that.” @DataTrekMB

It’s the “most important flow to know,” says Bank of America Merrill Lynch, and the subject of our chart of the day. In a note, the bank says annualized inflows to bond funds are up to a record $455 billion so far in 2019. That’s huge compared to the $1.7 trillion received over the past 10 years. They say the real danger is all this money flowing into bonds rather than stocks or commodities.

Consumer Sentiment: Consumer sentiment index edges up to 98.4 in July from 98.2

A measure of consumer confidence rose slightly in July and clung near a 15-year peak even in the face of rising economic headwinds that are likely to spur the Federal Reserve to cut interest rates in a few weeks.

The consumer sentiment survey edged up to 98.4 this month from 98.2 in June, according to a preliminary reading from the University Michigan. Economists surveyed by MarketWatch had forecast a reading of 99.0. 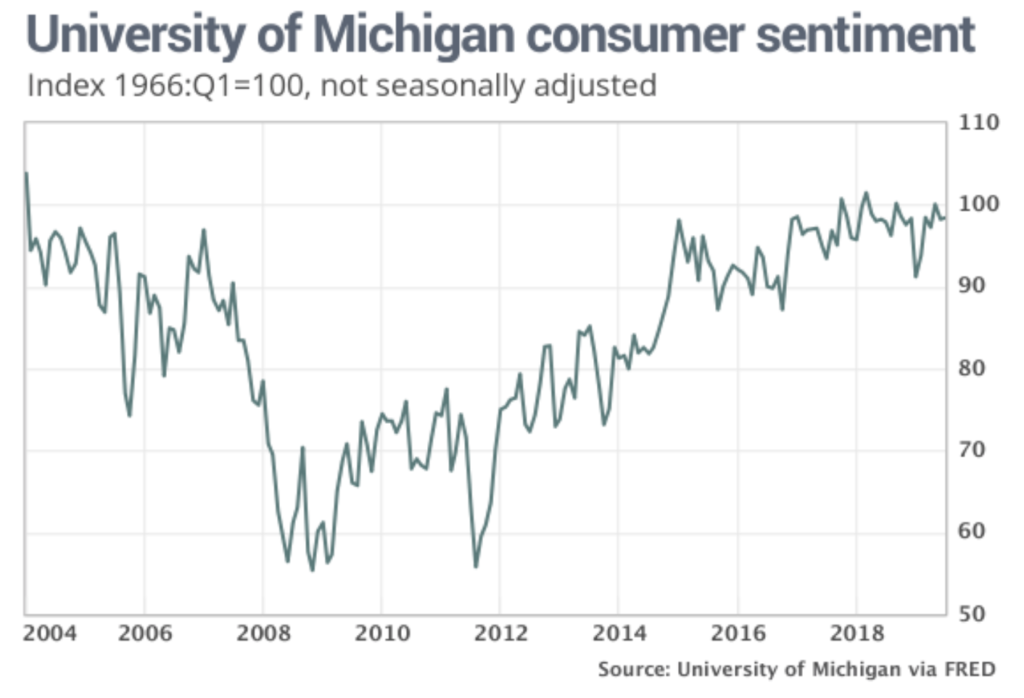 Iran’s Revolutionary Guards said on Friday they had captured a British-flagged oil tanker in the Gulf after Britain seized an Iranian vessel this month, ratcheting up tension along a vital international oil shipping route.

Britain said it was urgently seeking information about the Stena Impero after the tanker, which had been heading to a port in Saudi Arabia, suddenly changed course after passing through the Strait of Hormuz at the mouth of the Gulf.

A second tanker, the British-operated Mesdar, also made a sharp change of direction in the Gulf around the same time. But the Guards made no mention of a second vessel.

U.S. and Chinese senior officials spoke by phone this week, the second call since the late June summit at which the two sides agreed to a truce in their ongoing trade conflict.

U.S. Trade Representative Robert Lighthizer and U.S. Treasury Steven Mnuchin spoke to the Chinese side earlier, a USTR spokesman said. China’s Commerce Ministry said Vice Premier Liu He and Commerce Minister Zhong Shan were among those on the call. There were no details released from both sides on what was discussed.

Mnuchin said earlier this week that if discussions with Chinese officials by phone were productive that he and Lighthizer would travel to Beijing for more meetings.

Last night I talked about XLV and the possible reversal for higher. I also talked about knowing the components within an ETF, mentioning that JNJ, PFE and UNH were the top weighted, and that the top 10 components made up 50% of the entire weighting. Today, we saw XLV pull back and with JNJ moving lower and below that weekly trendline as well as UNH continuing lower and below support, the ETF was destined for lower unless many other names were stepping up to fill the void. It closed near the lows of the day, as was the case with much of the market. Unless we see some turnaround in those top weighted names, XLV may yet make its way down towards that 50-day moving average at 90.95. 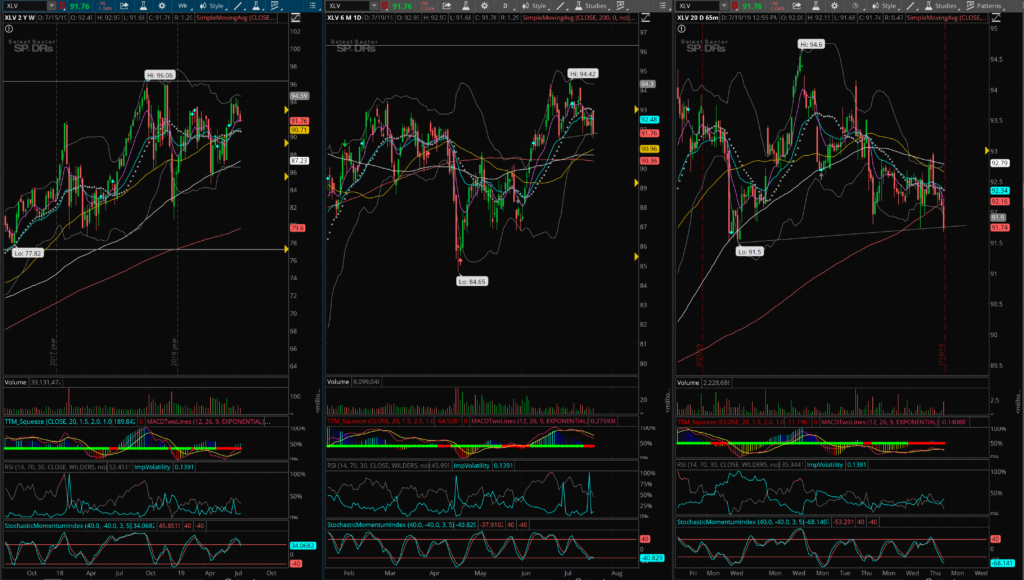 @WallStreetJane here; You can’t help but wonder if we should consider this a contrarian indicator: Distressed Debt Traders Have Tons of Cash and Nothing to Buy

Back in my distressed debt days we called these folks bottom feeders or vultures – but in a loving way. See, these folks often take debt that has difficult to liquidate assets, such as gas stations, which helps the banks tremendously in getting classified loans off their books. They will also take on debt with things like bulk loan sales, which can equate to high dollar relief for the banks.  I’m very curious to see what transpires over the next twelve to twenty-four months.

And Samantha’s favorite this week:
In Celebration of the U.S. Moon Landing: The Women Who Helped Men Get to the Moon