Market Thoughts: Lowest Volume Day of the Year on SPY

Today witnessed The Lowest Volume Day of the Year on $SPY. With that, there is not a lot of breakout conviction and given the Debt Ceiling Showdown – as talked about earlier in week in detail – it’s probable the market starts to sputter into NYSE $13333 – my Maginot Line.

So what lies ahead? In addition to earnings reports, there are some key economic reports next week. On Monday we get China GDP – a big Tell. Tuesday, we’ll get the latest report on retail sales and industrial production. Wednesday is housing starts. Thursday is jobless claims. And Friday is consumer confidence. We’ll also get an update on the budget for this year.

Did you know, performance of the stock market has largely tracked the movement of investment-grade corporate bond yields? And over the long run, equities tend to outperform corporate bonds because earnings tend to grow over time. Without earnings growth, investors prefer the security of bonds to the risk of stocks. With earnings growth, stocks may struggle. This relationship is worth watching closely.

I’m bullish Oil and Oil/Gas Companies with WTI above $60, but if it falls, I won’t be a surprised… as price is not accompanied by sizeable increase in OI.

Open Interest has essentially hovered around 2M since Dec 18. If OI doesn’t increase, then it’s just a short spec covering game until they get exhausted, says @RobertMacMinn 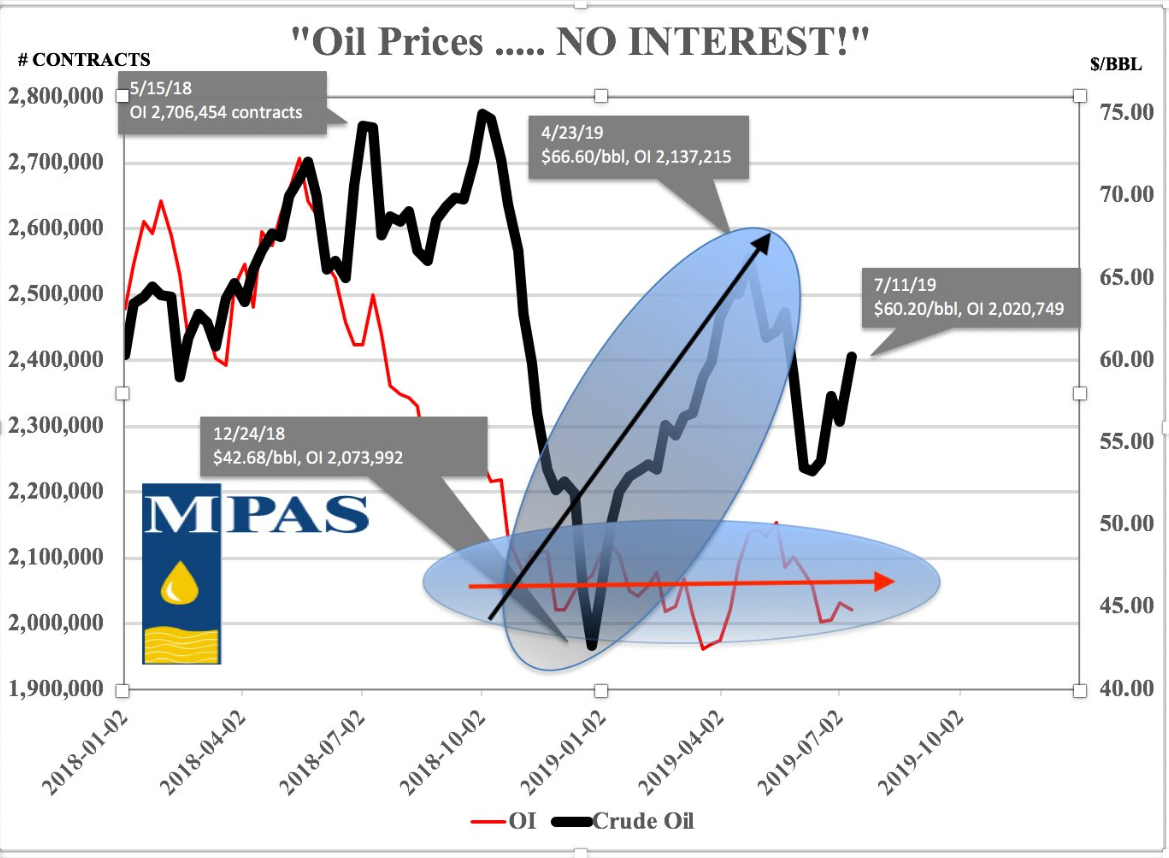 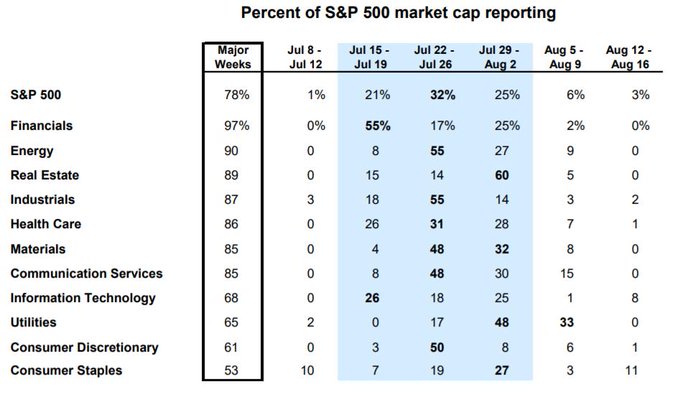 In a letter to House Speaker Nancy Pelosi, Mnuchin said that while there was “reasonable uncertainty” in projecting government cash flows, updated projections showed “there is a scenario in which we run out of cash in early September, before Congress reconvenes.”

“As such, I request that Congress increase the debt ceiling before Congress leaves for summer recess,” he said.

The Labor Department said its producer price index edged up 0.1% last month after a similar gain in May.

U.S. producer prices rose slightly in June as the cost of energy and other goods fell for a second straight month.

The increase offset an acceleration in services, leading to the smallest annual increase in producer inflation in nearly 2-1/2 years.

China imports from US plunge 31% in June amid tariff war

China’s trade with the United States plunged last month as a tariff war battered exporters on both sides of the Pacific Ocean.

And there’s no letup in sight: Tensions between the world’s two biggest economies continue to simmer even though President Donald Trump and his Chinese counterpart, Xi Jinping, called a ceasefire two weeks ago.

Data out Friday showed that the hostilities are taking a toll.

Chinese imports of U.S. goods fell 31.4% from a year earlier to $9.4 billion, while exports to the American market declined 7.8% to $39.3 billion, according to Chinese customs data. China’s trade surplus with the United States widened by 3% to $29.9 billion.

Facebook (FB): Trump says he’s not a ‘fan’ of bitcoin or Facebook’s libra

Bitcoin and other cryptocurrencies are having a tough time finding love in Washington.

President Donald Trump went after digital currencies, and professed his passion for the U.S. dollar in late-Thursday tweets. Stomping on the crypto faithful, he cautioned that unregulated assets can “facilitate unlawful behavior, including drug trade and other illegal activity…”

Trump then tweeted his displeasure over Facebook’s virtual currency project, Libra, saying it will have “little standing or dependability.”

“If Facebook and other companies want to become a bank, they must seek a new Banking Charter and become subject to all Banking Regulations, just like other Banks, both National…” Trump tweeted.

Jul. 12th, 9:15 am GM – my bottom picking play in TNX (lower bonds) from last Wed is working well. Today, with spike in rates, and pre-bank EPS Monday, the higher yield plays in banks are the thang to chase…