We have experienced a lot of dis-inflationary headwinds from the synchronized global slowdown and ultra loose monetary policies in the US, Europe and Asia specifically but globally in general. What could change these dis inflationary headwinds into inflationary tailwinds as a result of or separate from the geopolitical events like US-China Trade Deal collapse and hard Brexit? The biggest one: the collapse of the US dollar as the global reserve currency. Am I expecting that any time soon? No. Given the whole wide world is awash in debt, we won’t likely see the World’s Reserve Currency of the USD debase until other countries start to liquidate their US Treasury holdings. And given the size of US market buyers – Blackrock et al – that supply would likely be absorbed. At least, we need to hope it will be. If not, there is NO safety in stocks or bonds. Everyone will buy Gold and every penny-stock gold mining shop will rise 1000 fold.

With that, any recent USD pullback (it’s been range-bound for months) did not cause the recent violent move higher in Gold. It was just added fuel. Last month (June 6) for DailyFX I was interviewed for their podcast wherein I made my pitch for Gold:

I also presented in that podcast my thesis for higher Yen in 2nd Half of 2019:

Now, overbought is a relative term, so here’s a picture to demonstrate my position that Gold (and Silver and Miners) are OVERBOUGHT right now and should pull back.

Note the times GLD was outside the Monthly Bollinger Bands… And in the 2nd Month, GLD reversed, strongly.
Except 07-08… 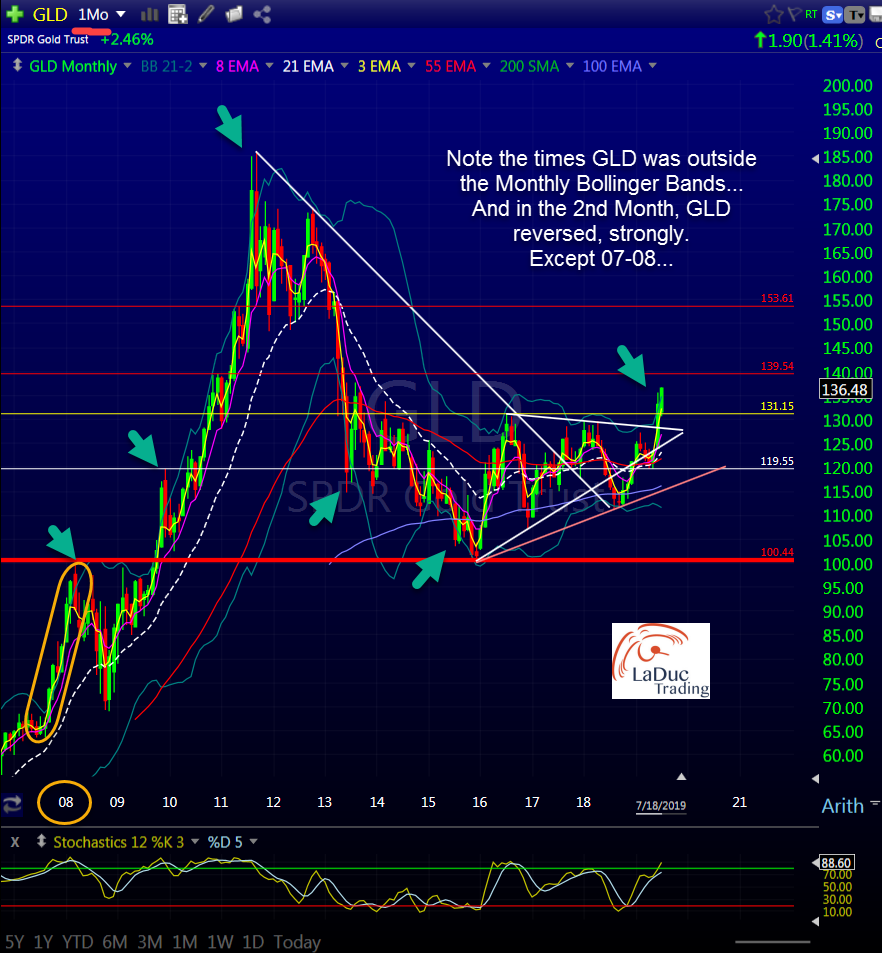 Jul. 19th, 7:45 am The very dramatic fall yesterday in the US dollar, on Clarida’s comments of potential QE tools ready to deploy, is being sharply reversed this morning. Williams came out to talk it back and I suspect it will be talked all the way back. With that, gold and silver were also at extremes yesterday (charts in Daily) and I fully expect for them to reverse. SLV below $15.15 is a swing short in my book. GLD may back and fill up here into FOMC week before falling dramatically on a disappointing rate cut.

Applications for unemployment benefits rose slightly in mid-July, but the rate of layoffs clung to exceedingly low levels that show the U.S. labor market is still going strong more than a decade after the last recession. 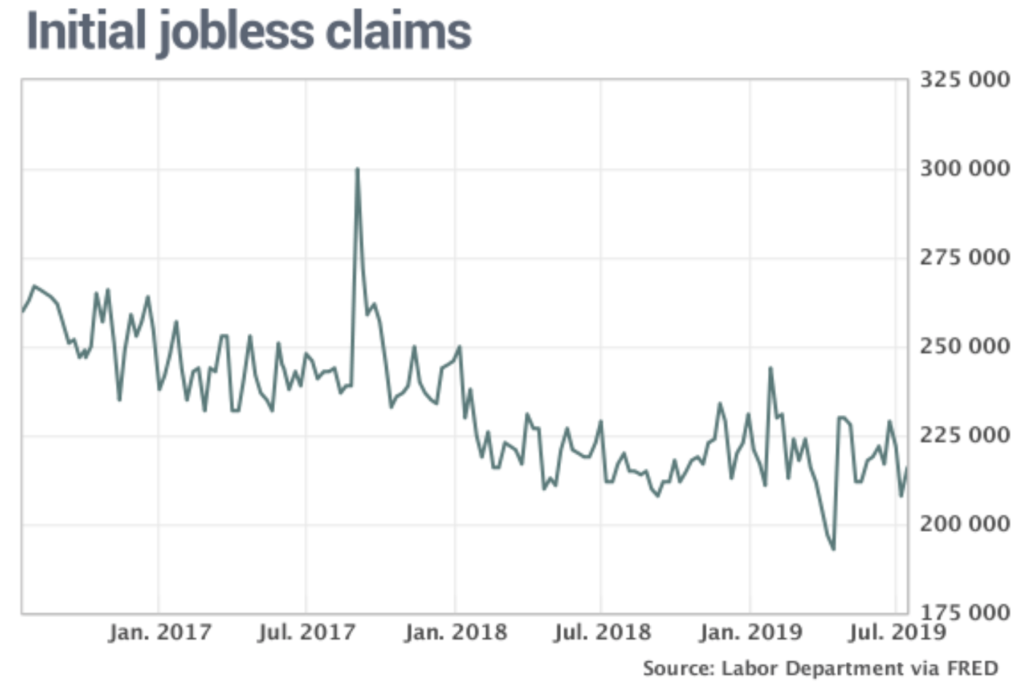 The Philadelphia Fed said Thursday its gauge of business activity in its region rebounded strongly in July after hitting its lowest level in four months in June. 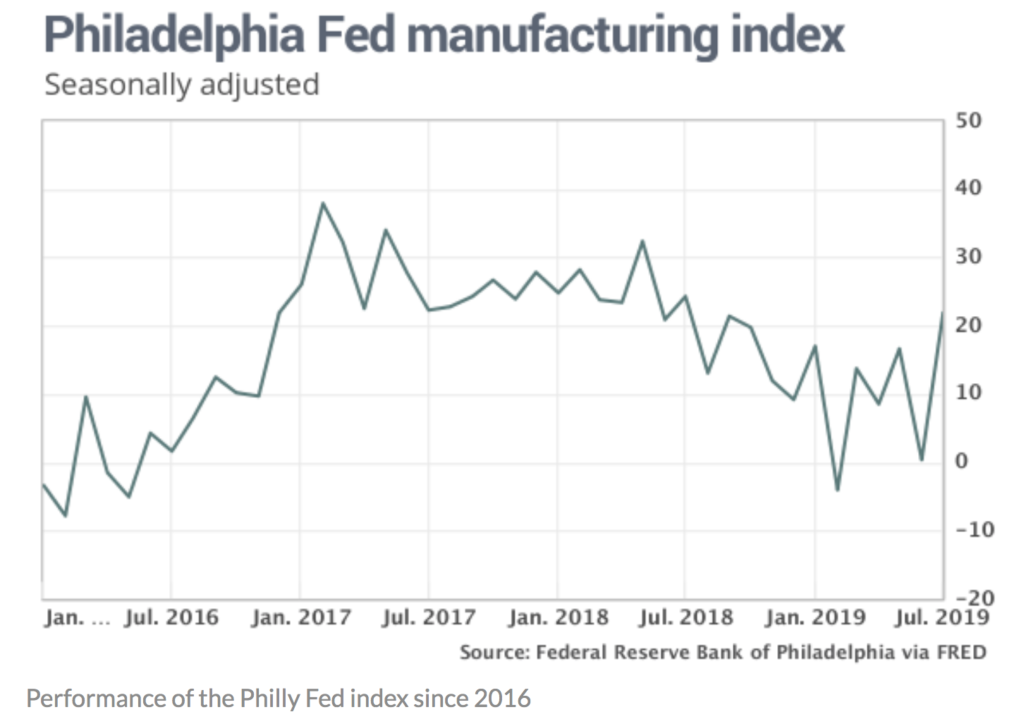 President Donald Trump said the U.S. “immediately destroyed” an Iranian drone that approached the USS Boxer near the Strait of Hormuz, the latest sign of escalating military tensions around the critical oil chokepoint.

The drone was a threat to the ship and its crew, Trump said at the White House on Thursday. The president said he’s calling “on other nations to protect their ships as they go through the Strait.” The Boxer is an amphibious assault ship.

“The Boxer took defensive action against an Iranian drone which had closed into a very, very near distance — approximately 1,000 yards, ignoring multiple calls to stand down and was threatening the safety of the ship and the ship’s crew,” Trump said.

Carrie Gray points to a stack of unwelcome mail on a conference table at the offices of Renegade RV, one of the leading U.S. manufacturers of high-end recreational vehicles. She’s buried in bad news from most of her about 350 suppliers.

“We got letters from 75 percent of them demanding tariff-related price increases,” explains Gray, Renegade’s materials manager.

About 85% of the recreational vehicles sold in the United States are built in and around Elkhart County, making it a popular stop for politicians to tout their visions for U.S. manufacturing – including President Donald Trump, who staged a rally here last May.

And yet this uniquely American manufacturing sector has been caught in the crossfire of Trump’s trade war, according to interviews with industry insiders and economists, along with data showing a steep sales decline amid rising costs and consumer prices. The industry has taken hits from U.S. tariffs on steel and aluminum and other duties on scores of Chinese-made RV parts, from plumbing fixtures to electronic components to vinyl seat covers.

Boeing Co. plans to report a $4.9 billion accounting charge with its second-quarter results next week, a sign of the widening financial toll from the company’s beleaguered 737 Max jetliner.

The after-tax writedown, equivalent to $8.74 a share, covers potential concessions and considerations for airline customers who have been forced to cancel flights and line up replacement aircraft as the Max’s grounding enters its fifth month, Boeing said in a statement Thursday. The costs will clip $5.6 billion from revenue and pretax earnings in the quarter.

XLV has been consolidating for the last couple of weeks. It pulled back to support and bounced with a nice reversal candle today. Weekly, daily and hourly squeeze in play. Here’s the caution; The top 10 components (63 total) comprise 50% of the weighting so gauging what they’re doing is critical.. The top weighting is JNJ at 10.65%. JNJ had already taken a hit due to legal issues and fell further after earnings, but has now hit weekly trendline support so a bounce is possible. PFEat 6.96% uptrend, nice daily candle and earnings not until EOM. UNH at 6.68% reported earnings this morning and fell after some caution regarding future revenue. However, UNH had just had a huge run up and it held that support level of 259. You get the point. Know what you’re trading. 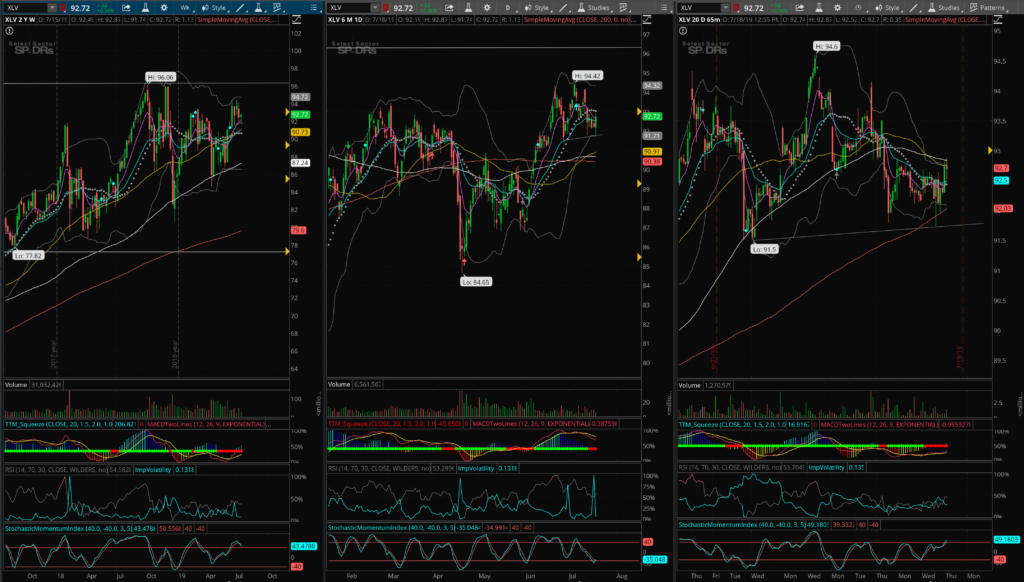 I can honestly say I never would have imagined we’d be talking about a massive “fake meat” market: Fake meat is ‘no laughing matter’: Plant-based protein will be worth $85-billion by 2030

“…nine years of research has left me with the unshakable knowledge that the lack of women + minorities in the asset management + investment industries is making everyone, from Wall Street to Main Street, poorer.”