Market Thoughts: From QT to QE in a New York Minute

Despite market at all-time-highs, positive GDP growth, unemployment at 50 yr lows and, as a result, consumer confidence near 20 year highs, oh, and even with fiscal and monetary conditions at their loosest in decades, Fed Chair Powell announced the FOMC decision to stop their balance sheet run-off (two months early) and offer up ‘a’ 25 bps rate cut. July 31st was a day for the record books: from Quantitative Tightening to Quantitative Easing in dramatic turn-around fashion.

And you would think the markets would love it as they surely demanded and expected it. But they didn’t expect or love his reference to it being a “mid-cycle adjustment”. And with that I said in my live trading room and twitter to brace for impact. (I think my exact words were something to the affect “he just screwed the pooch” and with that markets dropped hard with Gold and Miners while USD went into escape velocity mode. I was angry; I said so on Twitter.

My position was articulated in advance. That the 25 bps cut NEEDED to be 50bps – as I pitched in a @realvision interview Tuesday that sadly won’t be aired. My position was that a bigger cut was needed to keep markets aloft, to revert the yield curve inversion + reflate commodities.

Also see my Market Thoughts on USD Monday wherein I have been calling for $DXY to $100: US Dollar on Path of Least Resistance

While the Dollar flew, my Gold prediction started to pay off as posted in SeeItMarket last week: Prepare For Pullback In Gold Then Relaunch – Just Like 2008

What you won’t see on RealVision

My Interview, which I recorded on Tuesday but was scrapped last minute by their content team. So… here’s what I said:

* A Bull Steepener in next 6-12 months.
* Higher USD before weakens EOY.
* Fed cutting 50 bps this yr and sooner is better than later to try and avert recession.
* Rotation into oversold small caps and transports as alternative.

Moving forward, market is pricing in a 71% probability they cut again at the next FOMC meeting on September 18. The curve is still inverted. Markets did not get their 50bps cut in July but they will for September, and here’s why: 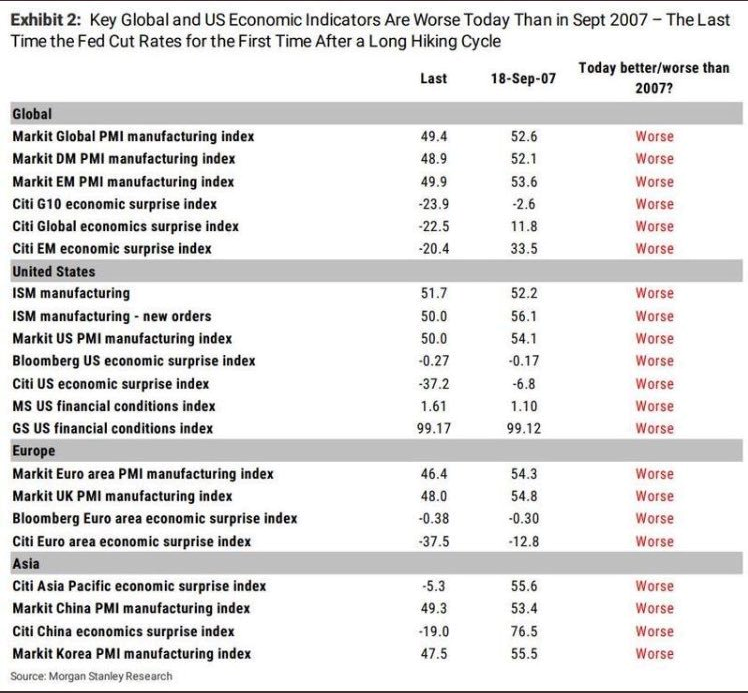 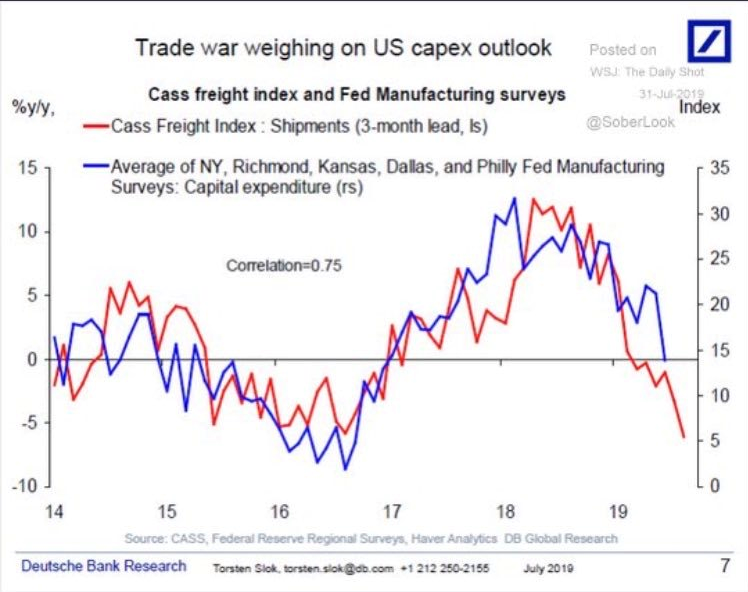 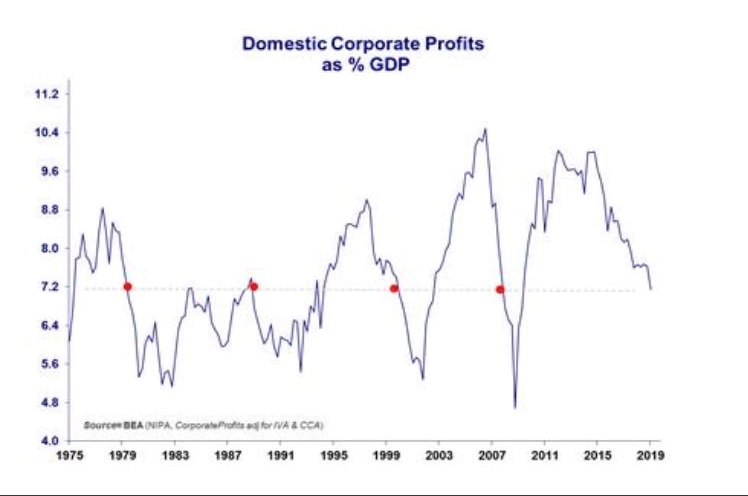 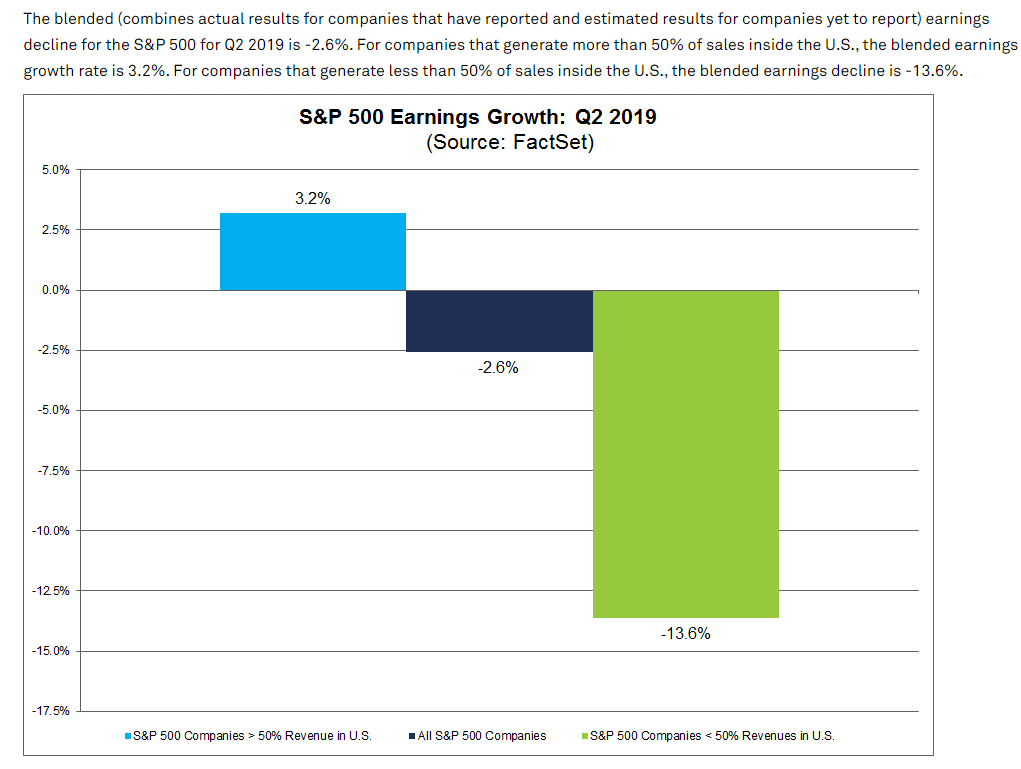 After the big FED day and the subsequent market move lower, I think we really just have to wait and see what tomorrow brings before making new assessments. It’s hard for me to get away from the idea that buy-the-dip mentality remains in play and that, while we may pull back a bit more, was today really the catalyst that breaks the proverbial camel’s back?

In the meantime I did want to mention one of my favorite trading names on the long side for the past couple of years – $ADSK  It had gone on its merry way with typical ebb and flow but started showing signs of topping and as of today it appears we are at decision time. A classic head and shoulders pattern with price closing just above the neckline. It’s been selling off hard for a couple of days already and is approaching daily oversold levels. It’s also coming in to support at the weekly 50MA and the daily 200MA. Looking at the bollinger bands, it has closed three days in a row outside the lower band on the daily and is approaching the lower band on the weekly. We might just get a brief reprieve and then a definitive break of the neckline, so I’ll be watching closely for directional moves that confirm or negate this pattern. 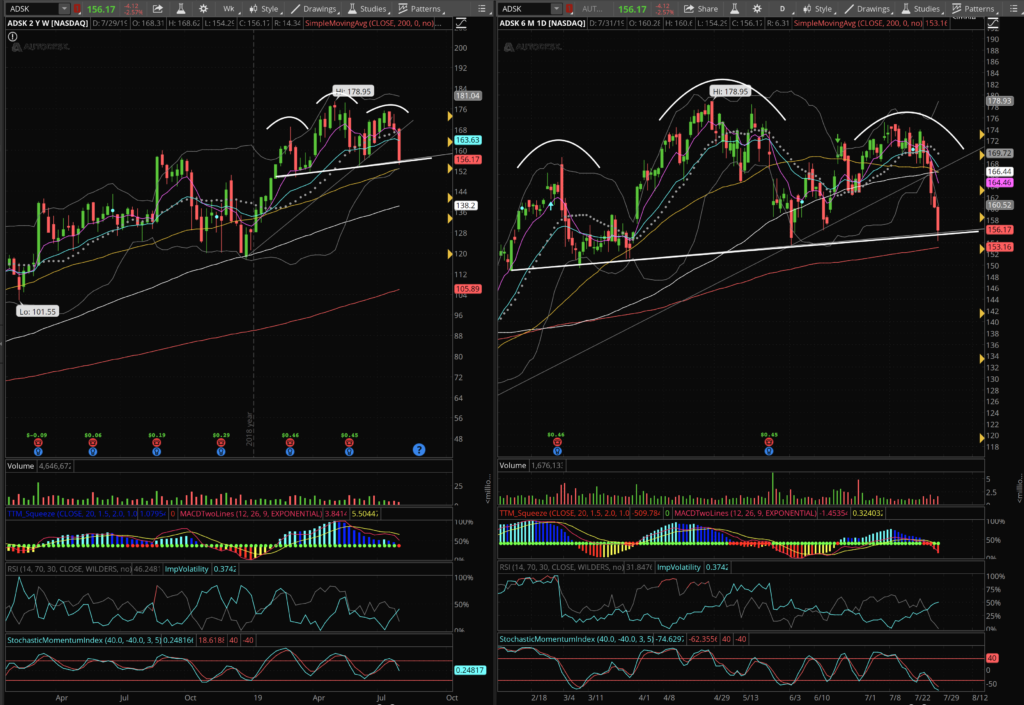 The nation’s businesses created 156,000 private-sector jobs in July, payroll processor ADP said Wednesday, showing that companies are still willing to hire despite stiffer headwinds for the economy such as the ongoing trade spat with China. Economists polled by Econoday had forecast a gain of 155,000. 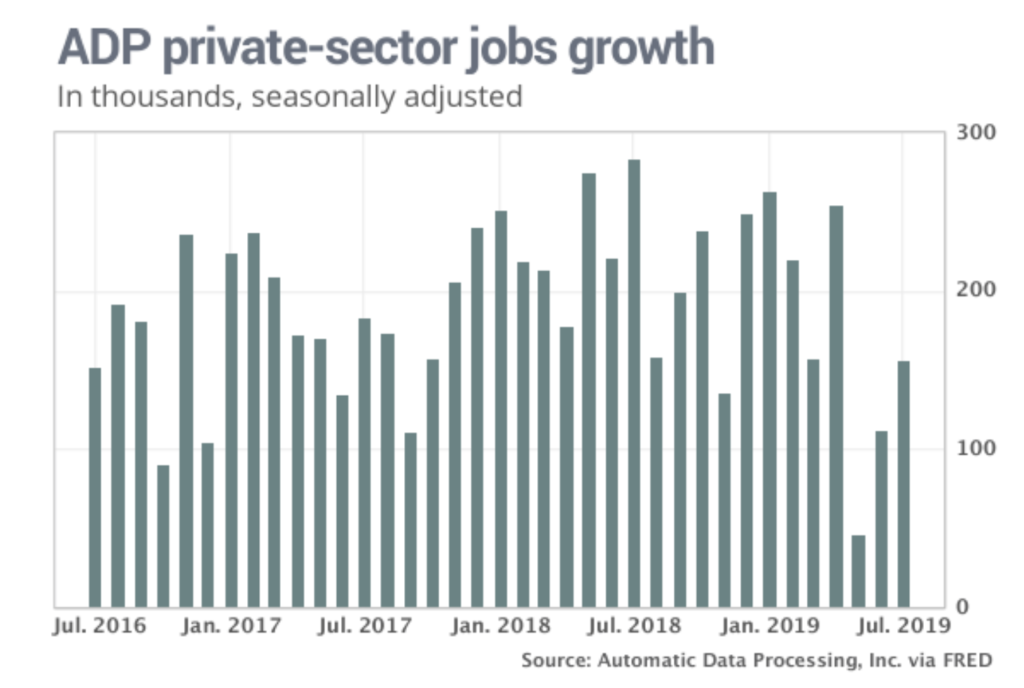 The cost to businesses of employing American workers rose at a slower pace in the second quarter, offering more evidence that labor costs are not adding much to inflation.

The employment cost index rose 0.6% in the second quarter, the government said Wednesday. Economists polled by MarketWatch had forecast a 0.7% increase.

The increase in compensation gains over the past year, what’s more, slipped to 2.7% from 2.8%. 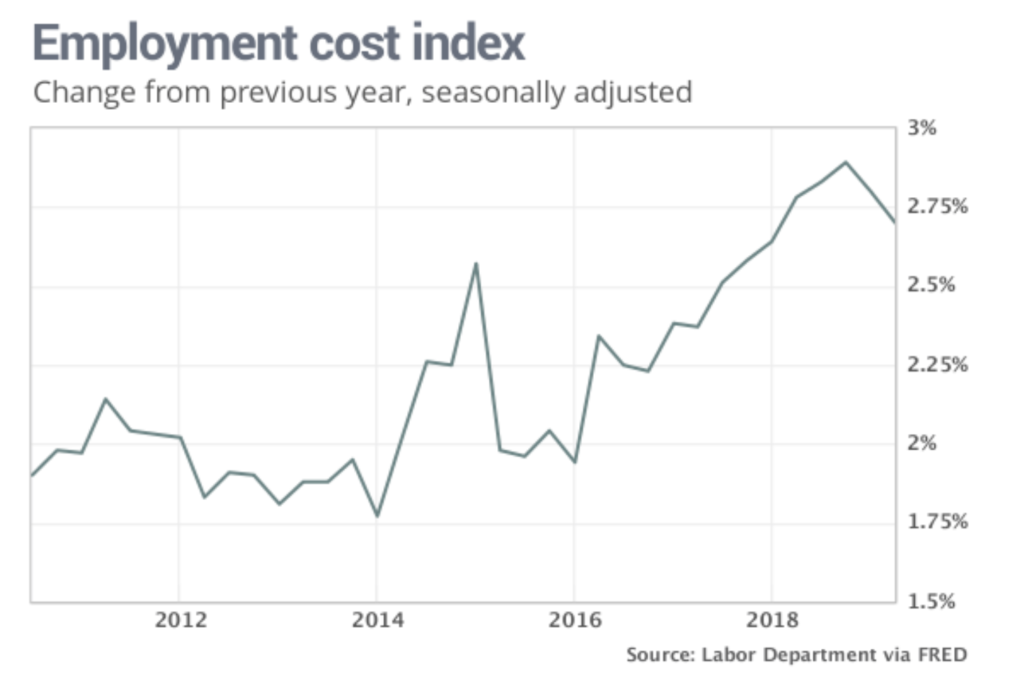 Chicago PMI: The Chicago PMI business barometer decreased to 44.4 in July from 49.7 in June

A measure of business conditions in the Chicago region dropped further into contraction territory in July. The Chicago PMI business barometer decreased to 44.4 in July from 49.7 in June, MNI Indicators said Wednesday.That’s the lowest since December 2015. Any reading below 50 indicates worsening conditions. And readings below 45 are especially worrying. Economists had expected a rebound to 50.5, according to Econoday.

Four out of the five components were in contraction territory in July with only the supplier delivery index above 50. The production index hit a 10-year low. In a special question, only 14% of manufacturers expected the economy to pick up.

US, China trade meeting ends with sharp response to Trump

U.S. and Chinese negotiators wrapped up a brief round of trade talks on Wednesday that Beijing described as “constructive,” including discussion of further purchases of American farm goods and an agreement to reconvene in September.

The talks began amid low expectations, with Trump on Tuesday accusing Beijing on Twitter of stalling, and warning of a worse outcome for China if it continued to do so.

On Wednesday, Chinese Foreign Ministry spokeswoman Hua Chunying said that she was not aware of the latest developments during the talks, but that it was clear it was the United States that continued to “flip flop.”

American farmer: Trump ‘took away all of our markets’

Since trade tensions began in 2018, farmers have faced major financial challenges, since China was once a major U.S. agriculture buyer.

And losing customers has become a major issue. Soybean farmers have been dealing with this, as China has turned to other countries like Brazil for soybeans. Nuylen said this is also happening for wheat farmers, as China has begun importing wheat from Russian regions.

“All these countries went to different countries to get their grain,” Nuylen said. “How are we going to get the relations back with them to buy our grain again and be our customers?”

Between 2016-2017, China was the fourth-largest wheat buyer in the world, importing more than 61 million U.S. bushels. In 2019, the top U.S. export destinations for wheat include Mexico, the Philippines, Japan, and Nigeria — China is not even among the top 10.

The United States on Wednesday imposed sanctions on Iranian Foreign Minister Mohammad Javad Zarif, targeting the country’s top spokesman and potentially hurting chances of diplomatic talks amid rising tensions between the two countries. The sanctions against Zarif would block any property or interests he has in the United States, but the Iranian foreign minister said he had none.

Zarif was an important figure in the 2015 Iran nuclear deal agreed under the administration of President Barack Obama with Tehran and other world powers. President Donald Trump pulled the United States out of the deal last year.

File under who would have thought: Your Old Bra Clasps Can Save Injured Turtles