REALLY GETTING CLOSE TO MY SPX PRICE TARGET OF $3060 from Market Thoughts: When Is It Safe To Buy?

Oct 2nd: I believe we now chop and drop into the 9th and then move higher after that into FOMC on the 31st. Samantha LaDuc

Free Treat! It’s Halloween Week after all… My Weekly Fishing Plan for Clients.

Clients receive my Macro Views  – risks and opportunities – to my Micro trade ideas/set ups. You can too!

Scary Halloween Thread! Click on it – it’s all about Sentiment, which is most trade-able at extremes! 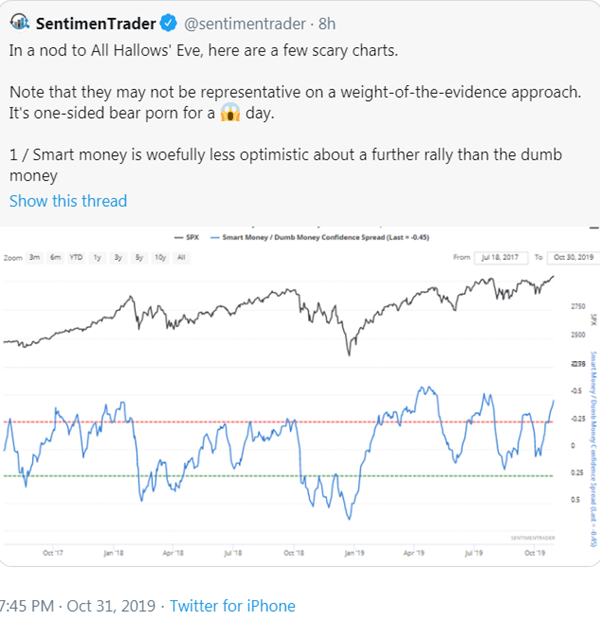 Talking about extremes: We have a Bull vs Bear battle waging over which way the US Dollar will move next, and as you’ve heard me say before:

USD makes the weather and the Rate of Change determines the severity.

Well, some very big brains are Bearish and calling for a Top. I’ll highlight those reasons another time. Since this is my daily ditty, and I am in the USD Bull camp, you get the Bullish case first 😉

In a nutshell: Dollar is defacto tightening – so even as rates were dropping over the past year, USD was rising – in part due to Trump’s trade war. And I contend: A trade deal of any substance will not materialize.

Here are some other really good reasons. 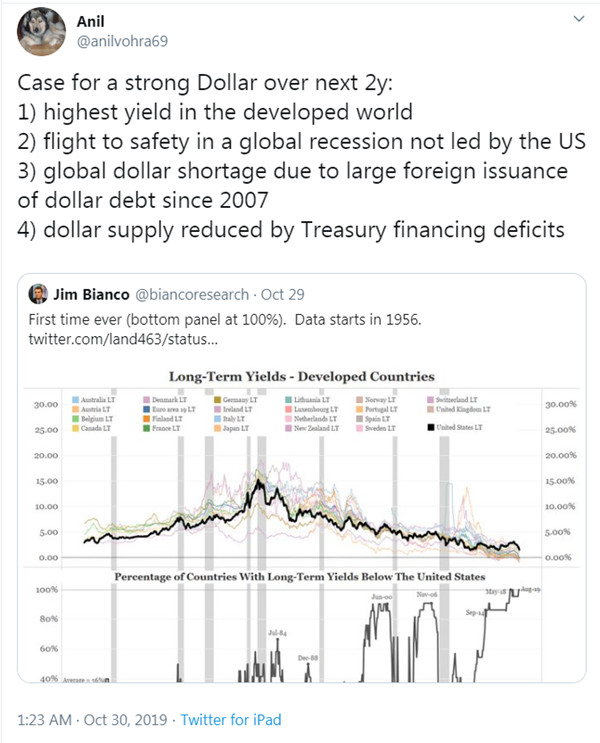 The hit to AAPL has not been priced in.

Grabbed this from Bloomberg. Not only does it support a Bullish USD theme, but I hadn’t heard it put quite this way before.

U.S. is exchanging far fewer dollars in return for the world’s oil, which limits the amount of petrodollars circulating around the world. George Pearkes of Bespoke Investment Group, shows U.S. crude oil imports drifting steadily down as the U.S. ramps up domestic shale production.

“Add on what might happen as electric vehicle deployment ramps up, and the prospects for a net crude trade surplus in the near future mean one source of dollar liquidity .. drying up.”

It’s almost certainly going to happen, and it’s a huge change that has the potential to impact the entirety of global markets 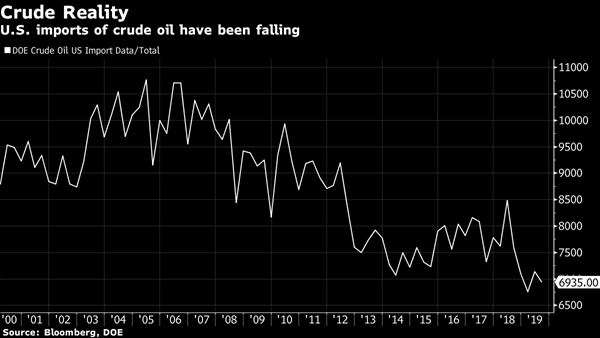