Bryan Rich runs Billionaire’s Portfolio and writes an almost daily column for his service as well as contributes at Forbes. This post caught my attention as it succinctly lays out a theme I have seen presented about a month ago by Bond Manager Peter Tchir.

Bitcoin has had another huge move over the past three months — more than tripling. And then late yesterday afternoon, it collapsed 15% in just minutes. It lost 25% in value on the day.

Here’s a look at the chart. You can see the first run-up and this most recent run-up … 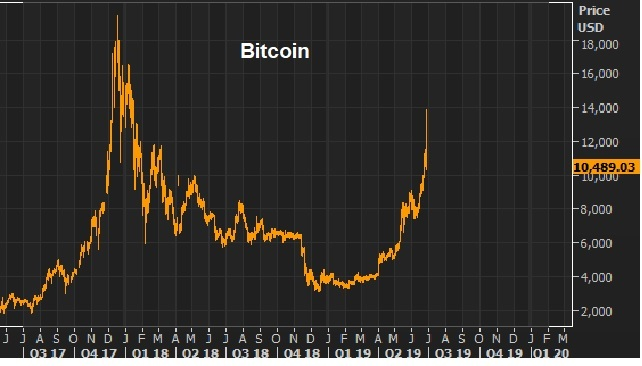 Remember, this first run-up had everything money moving out of China, and less to do with Silicon Valley genius/ global monetary system disruption.

In late 2016, with rapid expansion of credit in China, growing non-performing loans, a soft economy and the prospects of a Trump administration that could put pressure on China trade, capital was moving aggressively out of China.  That’s when the government stepped UP capital controls — better policing movement of capital out of China, from transfers to foreign investment (individuals can move just $50,000 out of the country a year).

Of course, resourceful Chinese still found ways to move money.  Among them, buying Bitcoin. And that’s when Bitcoin started to really move (from sub-$1,000). China cryptocurrency exchanges were said to account for 90% of global bitcoin trading. Capital flows were confused with Silicon Valley genius.

But in September of last year China crackdown on Bitcoin – with a total ban.  A few months later, Bitcoin futures launched, which gave hedge funds a liquid way to short the madness. Bitcoin topped the day the futures contract launched.  And a few months later it was worth 1/6th of its value at the top.

Is this time different?  Is this real traction for Bitcoin, or is this just Chinese capital flows looking for a parking place, again?  Likely, the latter.  It’s probably no coincidence that as the prospects of a ‘no deal’ with China have elevated in recent months, Bitcoin has again been on the move.  As we’ve discussed, if Trump holds firm on his demands, it seems impossible that China can do his deal.  It’s political suicide for the Chinese Communist Party.  With that, they fight tariffs with a devaluation of the yuan.

With those prospects, if you have money in China, you have been getting it out!  While cryptocurrency exchanges have been banned in China, owning and buying Bitcoin in China is not banned.  The Bitcoin futures market and off-exchange (peer-to-peer) trading are liquidity sources for Chinese citizens to respond to potential devaluation in the yuan.

With the above in mind, this round of Bitcoin bubble may not deflate until/unless Trump makes concessions to do a deal (which seems unlikely until, at least, we get past the July Fed meeting).