An Abundance of Caution

Fallout from Trump’s trade wars have been felt by economies around the world.

More than 40% of Germany’s GDP was derived from exports in 2018, the most of any major global economy… Many companies are scaling back their investment plans, something that will have repercussions for years to come.

The most important problem remains those factors that we cannot measure – specifically the reluctance to invest. Reuters

It’s too late to rescue the global economy according to the IMF. The only question for many is whether the downturn morphs into a recession. 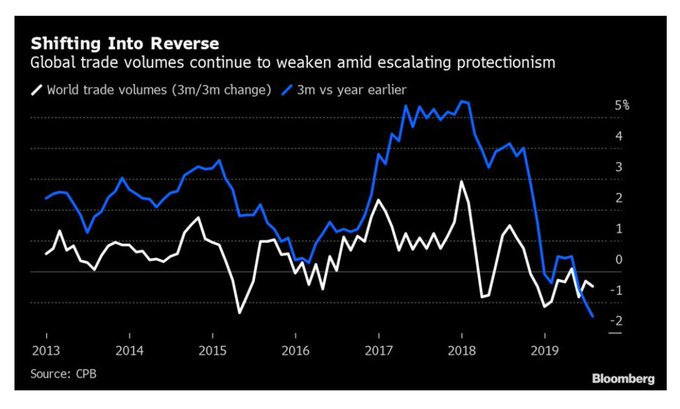 De-Globalization, Nationalism and Competition intensifies as the Trade War drags out:

Trump's trade offensive is leading China to double down on its state-led economic model. Latest from @kubota_yoko: China’s new $29 billion semiconductor fund is part of the country’s continuing effort to become less dependent on U.S. technology https://t.co/6zpY2Ni4dI via @WSJ

Oct 24 Beat rates have been fine, but guidance has been a major problem the last few days as we’ve entered the heart of earnings season. 36 lowered guidance to just 17 raised over the last 2 days, more than 2 to 1 to the downside. Big negative shift from recent quarters. @bespokeinvest

As it relates to a Bespoke note that Cumulative Advance-Decline is bullish, note my repeated analysis that shows this will be tested very shortly. NYSE Advance Decline (admittedly strong despite choppy SPX action) is hitting its head on channel resistance… Get your popcorn ready!

I do not know the structural dynamics of the current short-term repo funding but it smells of crisis trying to be averted in that massive government borrowing seems to have started to break the existing overnight lending financial system.

«There is a lot more risk of a recession in the United States than people are giving it credit for.»: Jim Bianco.

Fed’s massive liquidity injections could make the problems in the short-term funding markets even worse. He fears that the risk of a recession in the US is underestimated and he expects further downward pressure on interest rates.

«The Repo Market Has Been Drugged Into Submission»

“if funding conditions were to spike in a manner similar to mid-September but persist for weeks as opposed to the few days… there could be a broader de-leveraging across financial markets that could result a material tightening of financial conditions”.

Bears Repeating: The Short-Volatility Trade Is Now So Big It’s Starting to Break 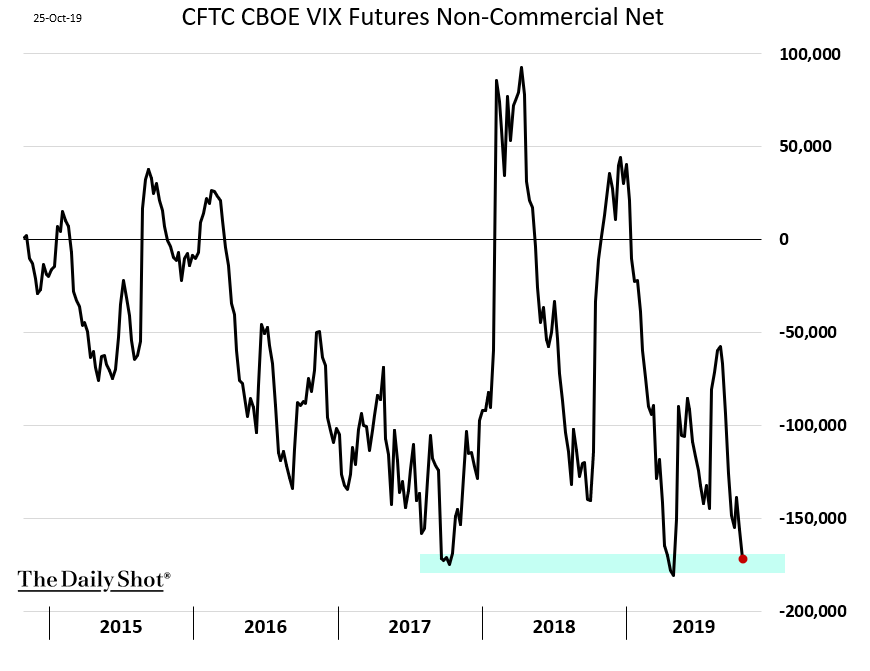 Market Liquidity is also at risk:

Since the beginning of August, headline risk from Fedspeak, trade wars and Brexit has significantly escalated and become increasingly difficult to time and anticipate. Higher intraday volatility likely jeopardizes some systematic and high frequency trading strategies, resulting in a sharp pullback from this community”

“a fundamental change in risk appetite may be the new trigger causing the sustained drop in liquidity”. Heisenberg Report

Growth-To-Value rotation continues, as discussed in this week’s Intermarket Chart Attack, but also over the past two months specifically highlighting:

As this rotation continues to play out, the risk to the Private Equity world of debt and investment speculation increases (think: Softbank and WeWork as poster child).

GREAT set of articles on how Private Equity managers won the financial crisis. But will they cause the next one?

And for our purposes: We may get to a point where Money Managers sell good stocks to make up for huge losses in private equity portfolios. With that, what is my mantra?

If they sell $AAPL $MSFT, why buy anything else? Samantha LaDuc

Oh the timing: $AAPL (with $FB) report just before FOMC October 30th. Individually they can cause a market pullback. So what are the chances both $AAPL + Fed disappoint, together? Keep in mind: Oct 30th fed cut expectation is now at 91.4%…

“….if the market thinks the only thing which is keeping it elevated is the prospect of more “cuts” down the road, then it’s going to fit to that model appropriately.” @MacroMorning via COMPENSATION & INCENTIVES

Christopher Whalen made a point the the fed needs to cut rates significantly to eliminate the rate differential or “spread” between domestic fed funds and repo and the effective negative cost of funds offshore. Their liquidity injections aren’t enough:

The Federal Open Market Committee is essentially trapped in the torment of Sisyphus. They keep trying to add liquidity to the domestic US money markets, only to see it leak out into the vast offshore market for dollar funding.

“Easing is the path to the dark side… Easing leads to dependence. Dependence leads to addiction. And addiction leads to suffering.”

With 92% probability of Fed cut next week, Powell could be setting up market for disappointment.

$AAPL is a sell here pic.twitter.com/GhHiCztr9c

The Bullish Thesis for markets is that Trump is biding time to just before Christmas to Remove Tariffs. The Bear Thesis would contend the Impeachment narrative should also reach a crescendo about then to dull trade war truce excitement. Timing here is key of course.

How to measure impeachment? See these four charts. pic.twitter.com/1riSV3ToCK

And then the risk turns to his potential replacement. If a democrat, what is their position on Stock Buybacks?

The outcry against Financialization and the Income Inequality it produces has picked up a lot of steam since I wrote my article last year Price Discovery And Stock Buybacks suggesting this very outcry and a potential hard left swing toward Warren/Sanders.

The generational wave of buybacks we’re in is “the most acute debt-for-equity swap of all time,” says @EconguyRosie. “$4T In corporate debt issuance, used to absorb $4T of equity, to the point where the S&P 500 share count has dwindled to a two-decade low.” 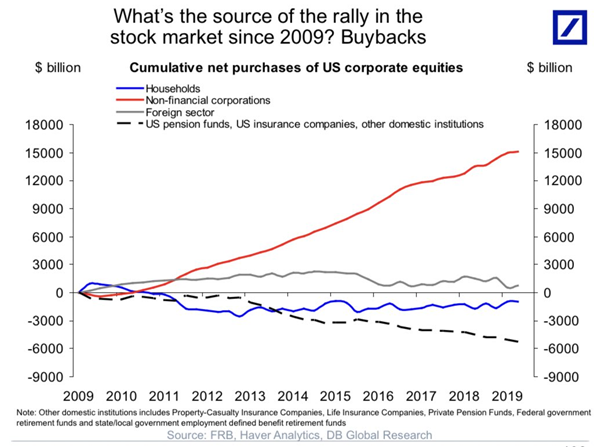 I have a whole Big Post dedicated to this: China: A Clear and Present Danger

What Could This Mean?

Stealth China Redemption of US equities /assets … and not just from Trade War, Chinese Deleveraging, Renewed Nationalism or USD De-risking BUT for alpha – as money flows into China’s new blockchain and cryptocurrencies.

They have also been stealthily accumulating vast sums of Gold. If at any point they want to cause the price of gold to skyrocket they need only disclose their holdings, but they won’t likely do that while they are still accumulating. The other consequence would be an “untold disruption in the forex markets – a yuan backed by gold could strengthen significantly.” The result would be a considerable selling off of US Dollars.