Fed On Pause: Will The Market Correct Ever Again?

It was a boring reaction to the October 30th FOMC rate decision, because the Fed did 100% exactly what was priced in.

I have written about this phenomenon before for clients; that we have a 100% success rate of market getting what it predicts. But there’s always the first time, so we all cozy up to our electronics and I open my live trading room just in case.

So wherein it is much easier to trust the market’s predictive powers, the Fed’s own Forward Guidance leaves much to be desired. A reminder, the FOMC’s summary of economic projections (SEP 2018) showed a consensus forecast (100% of members) calling for no rate cuts in 2019. This is the third time in just one year they have gone against their forward guidance.

Why’d They Do It?

Fed cut 1/4 point, as expected. Many are still wondering why as tensions seemed to have eased (or at least pushed out in time) on both Brexit and US-China trade negotiations.  Yes, October saw manufacturing and services data miss, with lower retail sales and durable goods orders, but this is not enough. Powell seems to intonate that an ounce of prevention is worth a pound of cure. For the cynical, a precautionary measure equates to a coming crisis.

But what are they preventing or protecting us from? Here’s a short-list:

Powell announces the expected Fed cut, waxes hawkish, and then collars the Fed statement which is in essence a collar on the market.

What do I mean?

Fed cuts interest rates when equities are at all time highs and US has better economic data than rest of world. So our stock market should stay levitated. It’s a version of the famous “Fed Put”, which is supposed to be used only in emergencies. It still remains to be seen if Fed believes we have one, and we just don’t see it yet.

Curious types will recall how we got here. We went from September 2018 with consensus that we would see no rate cuts for 2019 to cutting 3 times in a little over a year’s time. The 1st cut was supposedly to soften the impact from Trade War Tariffs. The 2nd cut supposedly to mitigate the rising recession risk as expressed through the inverted Treasury yield curve. But this time? Why cut a 3rd time? Avert potential funding freeze in the Repo Market?

Christopher Whalen and others have made a point the the fed needs to cut rates significantly to eliminate the rate differential or “spread” between domestic fed funds and repo and the effective negative cost of funds offshore. Their liquidity injections aren’t enough:

The Federal Open Market Committee is essentially trapped in the torment of Sisyphus. They keep trying to add liquidity to the domestic US money markets, only to see it leak out into the vast offshore market for dollar funding.

At the onset of the Press Conference Powell implied that Fed was satisfied with its Monetary Policy. (Oh, how that line is going to haunt them someday.) Just as Powell signaled a Hawkish Hold.  Then, Powell implied Fed would cut again if Data Dictated, so “3 and Done” mid-cycle adjustment rate cut cycle was not the swan song. It was more like Fed is On Pause, much like a movie we can pause so as to quickly run to the bathroom and then quickly run back to start the movie up again.

So…3 times is but the movie or the trailer? What will 4 times be called, because this feels very much like a sequel is in the works but when it gets released only insiders know.

When Powell said Fed saw no further rate hikes until signs of inflation appear, dollar reversed hard. We already have opaque interpretation of the ‘Data’ by which the Fed determines rate hikes and cuts, but everyone and their non-market-savvy sister KNOWS we have all kinds of Inflation just not the kind they measure! But as long as this Fed-speak is populated that we have no inflation, then rates CAN stay low. They can even go lower!! Pity the masses who do not benefit from the asset inflation orchestrated by these lower rates – not to mention negative interest rates for corporates and sovereigns – but that’s not who the Fed and Central Banks means to protect.

No Inflation Anywhere in the Developed World

With that, it would appear Fed is more likely to cut than raise UNLESS the means by which they try to control liquidity, treasury supply and the US Dollar fails and then we will have such INFLATION SPIKES that they will finally have to admit they were late. Late, not wrong. Never wrong. Because then confidence would erode, and the Central Banker To The World can’t be seen as weak or stupid. Just Late.

“U.S. government cannot issue more debt without driving up interest rates – it is simply a question of supply and demand.” Or Fed will have to “do the same thing as the ECB to combat America’s fiscal policy that is driving interest rates up.”  Martin Lowy

I’m Suspicious: That rates and the dollar are about to go up despite the Fed and here’s why.

For technicians, here’s my favorite chart on the US dollar. It has been consolidating for 4 years and above all the important indicators it needs to stay above in order to stay bullish. 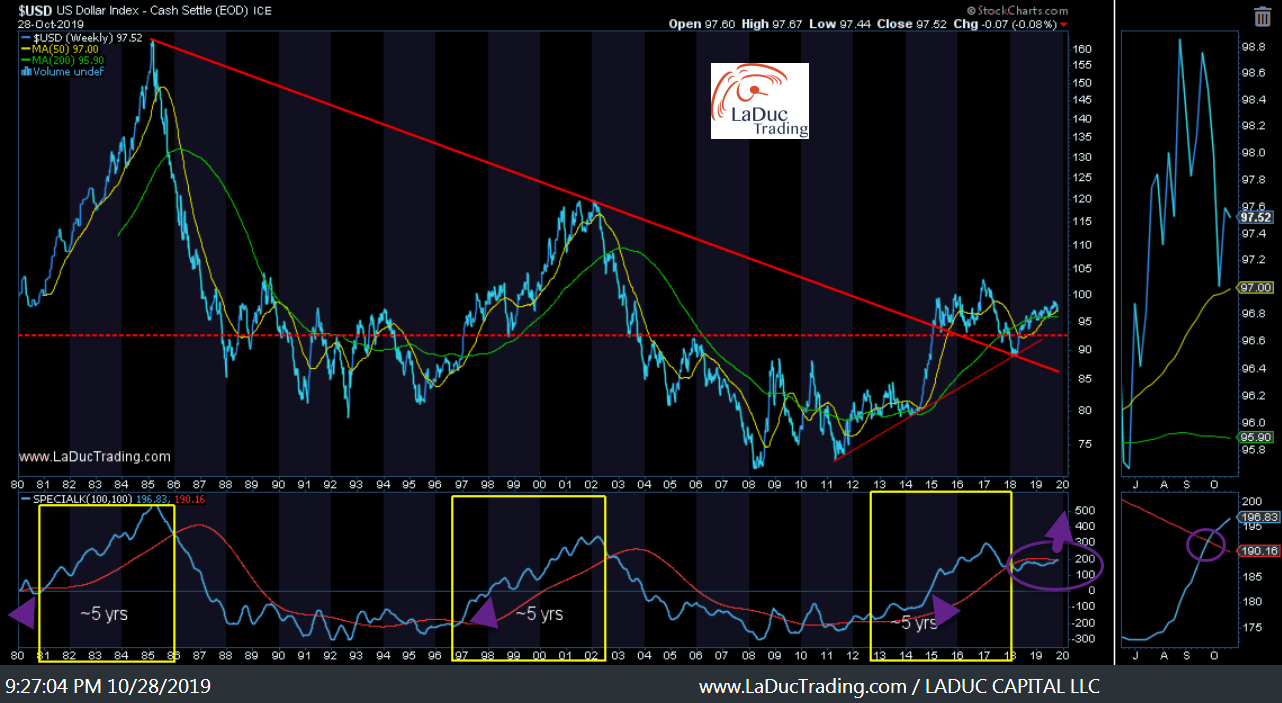 But the Force Is Strong To Go Long … Equities

The generational wave of buybacks we’re in is “the most acute debt-for-equity swap of all time,” says @EconguyRosie.

“$4T In corporate debt issuance, used to absorb $4T of equity, to the point where the S&P 500 share count has dwindled to a two-decade low.”

Large American companies can go abroad to finance debt at lower (to negative) rates than smaller US-focused companies, buyback their shares and continue to participate in their stock prices rocketing higher. The only thing that could truly change this seemingly unstoppable rate of ascent in share prices?

Slower earnings, say, from a Trade War to a large extent, Brexit from a smaller one, can slow the growth rate of earnings which can lower the correlated debt issuance and buybacks. Higher interest rates from Treasury supply financing deficits and higher US dollar – both of which are defacto tightening – are two very strong deterrents. But the biggest of all would be a change in political leadership that limit or ban stock buybacks all together. Queue the ‘dum dum dum’ music as both the front-runners of the Democratic party, Warren and Sanders, say they would ban stock buybacks almost immediately.

Regardless of which factor above gets traction first or loudest, many believe it’s better we break the addiction to lower rates.

“Easing is the path to the dark side… Easing leads to dependence. Dependence leads to addiction. And addiction leads to suffering.”

Will The Market Correct Ever Again?

In the prediction and investment game you can be right but have the timing wrong.

I continue to look to bonds and gold, the hallmark trades of this year’s Central Bank-driven rate reversal, and note how they have yet to make new highs despite a slew of bad global and U.S. data, high likelihood of Trade Deal falling apart, and rate-cut expectations from here to NIRP.

Here’s one Tell I will be watching closely as well. Markets are suppose to be forward-looking. LQD took off as soon as Powell paused rate hikes January 4th. It stopped to digest 2 rate cuts (and maybe Repo Liquidity infusion, Fed Balance Sheet expansion). Anyway, fast forward to now and this instrument looks like a rollover candidate. That would indicate a slowing appetite for this debt and risk appetite that has underpinned our market’s bullish run. 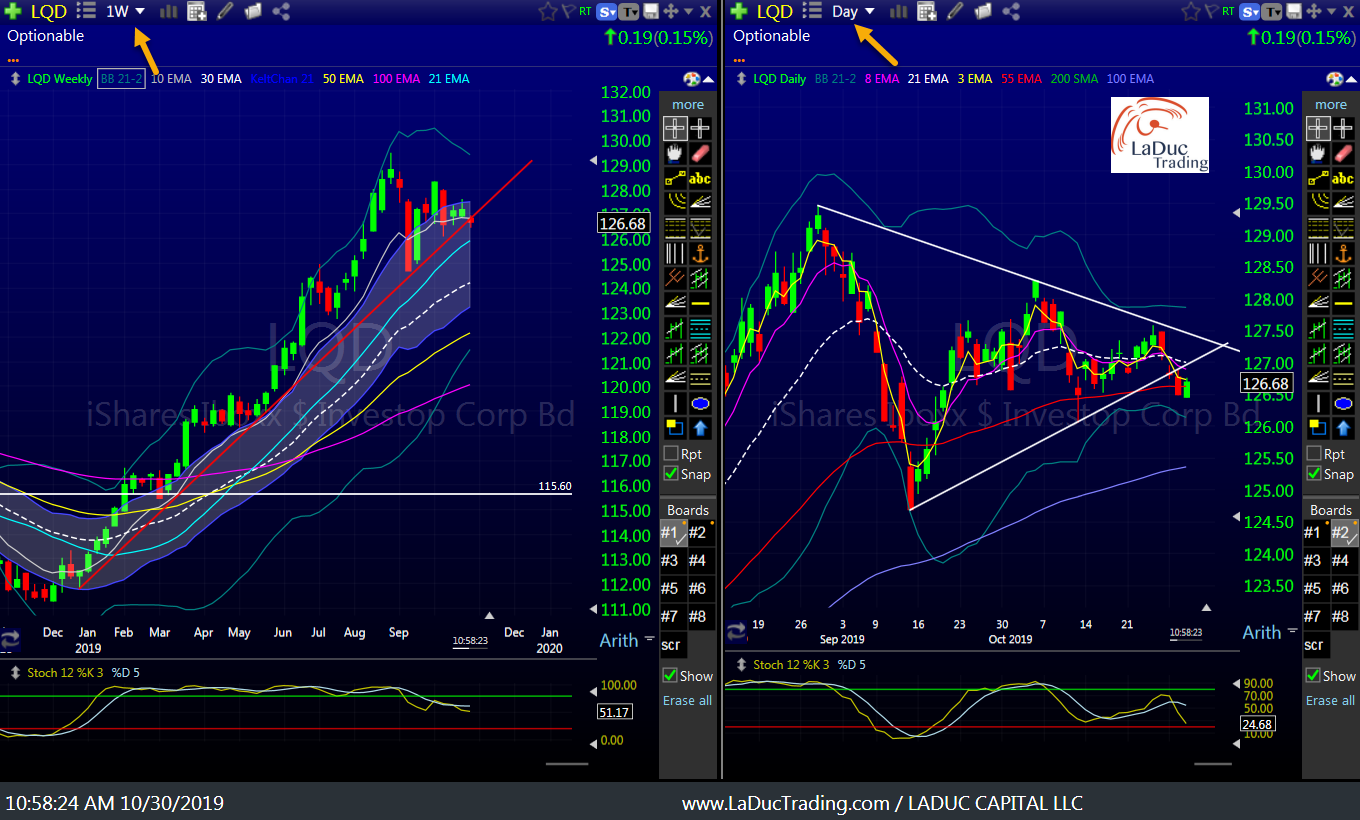 There are simply too many bonds being chased in the financial system and not enough cash on the other side of the trade.

A true liquidity crisis creates panic – everything sells off, even Gold and Bitcoin. Only those who are sitting on the sidelines will be in a position to pick up shares on the cheap.

I also don’t think shorting will be a six month ride down the hill like in 2008. A liquidity freeze is one thing, but a panic for cash, can morph into a liquidity Flash Crash event and convulse lower over weeks not months.

Risk premiums will be so quickly elevated in this race for liquidity and in this time of Quants and Algos, even those who try to short let alone protect in the thick of this downdraft will be played by Market Makers.

I see the asymmetrical rewards of playing this game of trading to benefit those who are either positioned short soon or have the patience to wait for the reset, which could be about 30% lower. Given current valuation for S&P near 20X income and Nasdaq near 24.5X, a reset lower in PE ratios would also incentivize the mass quantities of cash on the sidelines to come back in.

In the meantime…Fed is on “Pause”. And I for one do not know how this movie ends. But I think we will soon lose the TV remote and be unable to fast forward through the gruesome parts.